FGC 965 also known as NGC 3044 is a neat flat galaxy in Sextans some 75 million light-years distant by redshift. NED has 4 other estimates ranging from 65 to 71 million light-years, a rather good agreement for a change. NED classes it as SB(s)c? while the NGC project is more certain saying SBc. It made my list for two reasons. One is the odd plumes that it has. The one north of the western arm is the stronger but there\'s a similar but much fainter one north of the eastern arm. Both are tilted about the same amount with respect to the galaxy\'s disk. The other reason is that I\'m imaging the \"better\" entries in the Flat Galaxy Catalog. It certainly met that requirement even without the plumes.

Oddly none of the papers I read mention the plumes. They are all tied up with H alpha emission bubbles and HI regions none of which seem to correspond to the plumes. I was unable to learn a thing about them. The galaxy is rather isolated with nothing in the area that could have interacted with it other than some very small dwarf galaxies like the one off its southeast end with a similar distance. They may be due to it having digested one of these small galaxies in the recent past. Even papers giving physical descriptions of the galaxy fail to mention these odd features. They mention its lack of a core and central bulge, its HII regions (too small for my resolution) and its dust lane as well as its knotty appearance but none mention these tilted regions apparently \"above\" the plane of the disk. The galaxy was discovered by William Herschel on December 14, 1784. It isn\'t in either of the first two H400 projects.

There is a lot of quasars and quasar candidates (UvES) in the image. Usually, these are all more distant than the galaxies in the image. But in this image, there is one galaxy listed at over 7 billion light-years (has to be a monster of a galaxy) and quasars at one third that distance. Adding to the confusion is one object, SDSS J095350.35+012408.1, near the bottom center of the image. While some sources list it as a quasar others, including NED list it as a Seyfert 1 galaxy. At a distance of 5.39 billion light-years, it is in a range of many galaxies in my image as well as quasars so that is of little help. I\'ve just listed it as Q/G rather than take sides. The most distant galaxies are very faint, you likely will need to enlarge the annotated image to see them. As usual, all labels are to the right of the object and list distance in billions of light-years using NED\'s 5 year WMAP calculation.

There are quite a few galaxies in the 1.25-1.29 billion light-year distance range. They are likely related. NED lists several galaxy clusters at this distance in the image but none give a size and most show no galaxy at their location making it hard to tell just what is in the group. I didn\'t annotate them for this reason. One group near the top of the image has a huge Big Cluster Galaxy at its center and is listed with 16 members. Having an obvious core I did list it and another entry that may be for the same cluster that has the same redshift and nearly the same location. This latter cluster has no galaxy count. Neither have a size. The latter is RXC J0953.6+0142 while the major one is SDSS-C4-DR3 1212/MaxBCG J148.42240+01.70065.

There are three rather faint asteroids in the image with short trails. Short trails indicate they are nearing the end of their retrograde motion and are about to reverse to their \"normal\" eastward motion in the sky. They are identified in the annotated image.

Again, I found a galaxy on the western edge of the image not listed in NED at all. Usually, they are blue when this happens but not in this case. I still don\'t understand why some are missed by NED when it picks up many way too faint for my system. 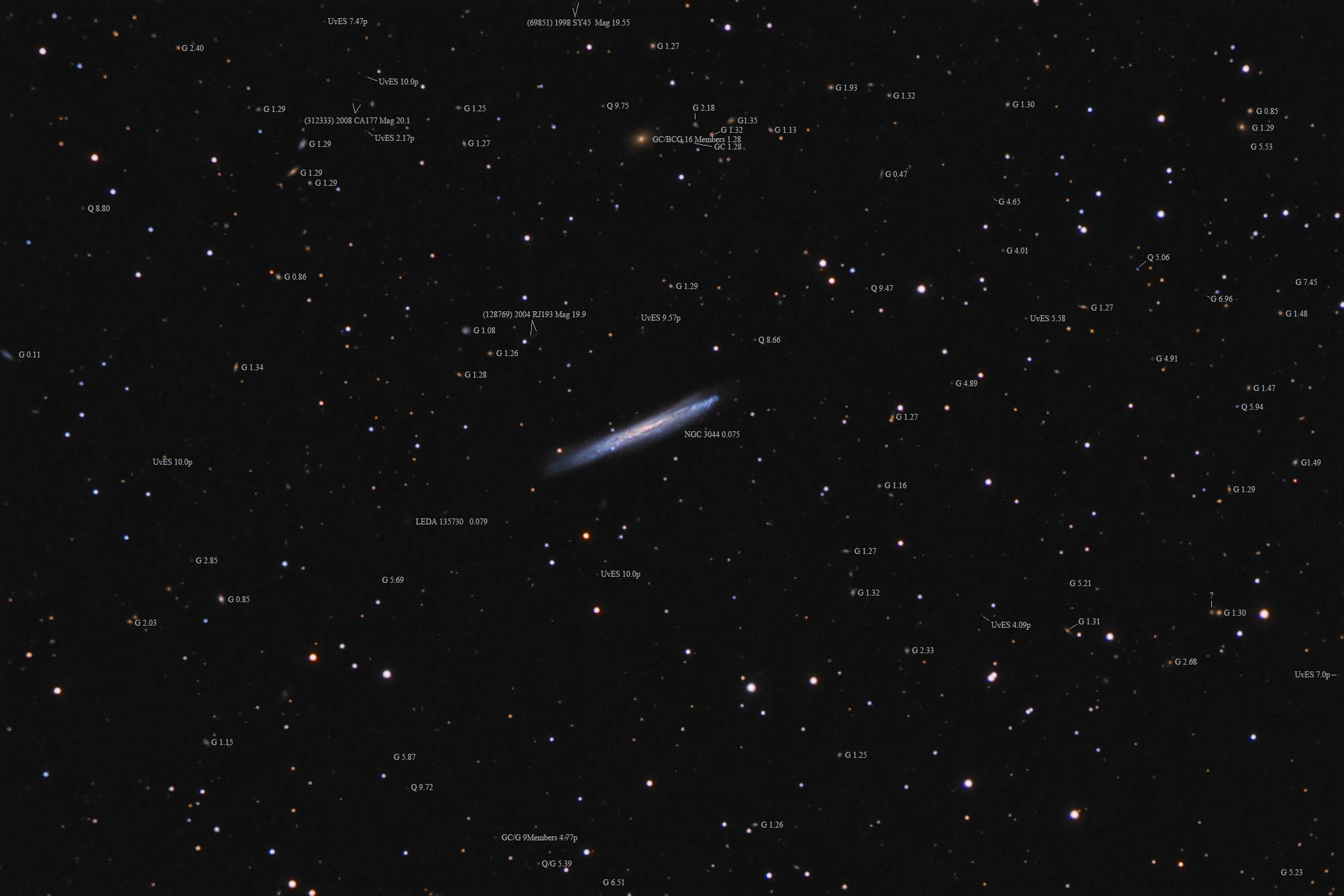 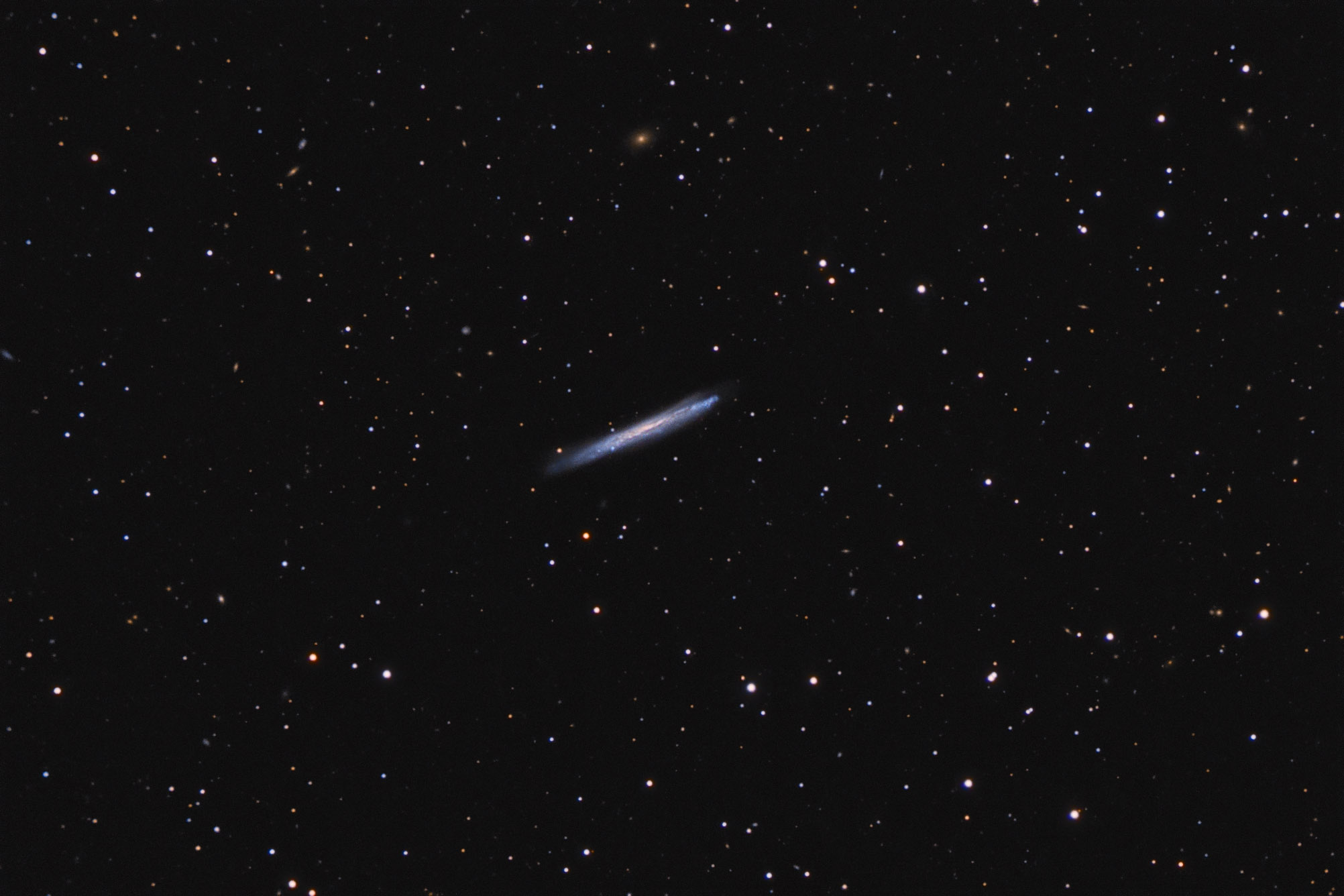 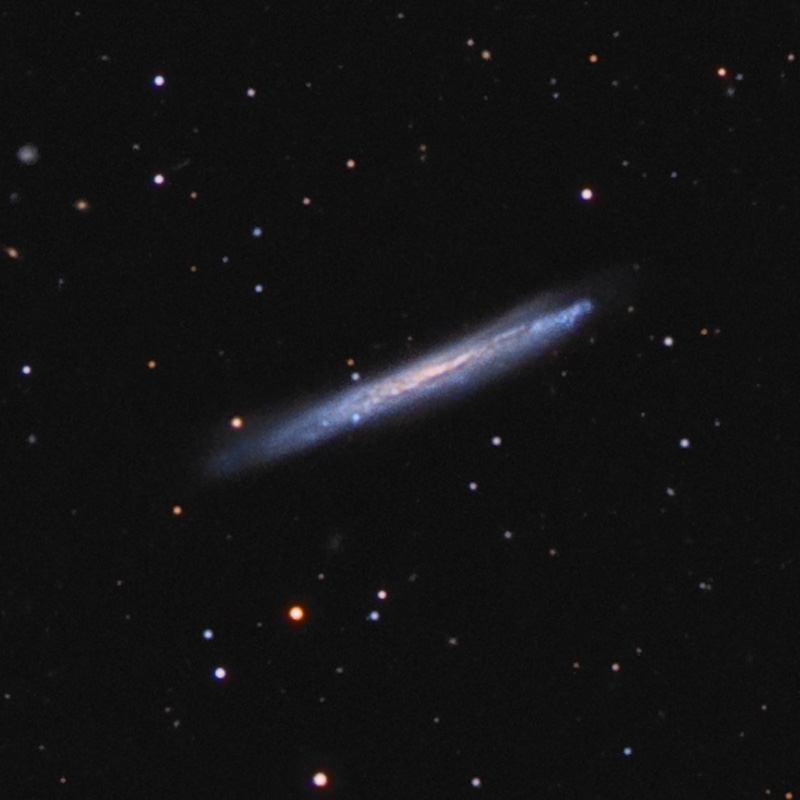