NGC 3090 appears to be the anchoring galaxy for a loose group of galaxies about 300 million light-years from us. I find two groups listed at NED, WBL 248 consists of the 7 major galaxies in the group while MZ 03587 more than doubles that number considering the many small dwarf galaxies in the group that are almost starlike in my image. NGC 3090 is a huge elliptical galaxy. Assuming its redshift look back time is right at 290 million years then the galaxy is 200,000 light-years across. Its outer regions sort of fade away making it hard to pin down a size though the eastern edge seems rather sharp as if it is an arc of a shell left over from one of the many mergers that likely created this large galaxy. I find very little on this group in the literature, however. It seems to have only one galaxy still giving birth to stars at a decent rate, that is LEDA 1080545, a very blue spiral that really stands out among the field of rather red and dead galaxies that make up this group. FGC 114A in the lower left corner appears rather warped to my eye. A surprising number of them in my images seem curved like this one. Rarely is a disturbing galaxy in the area. This time there are several small galaxies at about its distance nearby though none look disturbed. A few are rather dense so might be able to warp a low mass flat galaxy without being noticeably distorted in the process. All of the NGC galaxies were discovered by Albert Marth on January 22, 1865.

The annotated image notes all galaxies for which NED had redshift data. Those over a billion light-years distant were usually identified only by their coordinates so are shown only as G in the annotated image. The few quasars are noted by Q. NED is now including quasar candidates with photographic distance estimates. These are quite iffy so I\'m not including them unless they are also strong in UV light, a good indicator of a quasar. I did include one however that is quite blue in my image even though it wasn\'t listed as a UV source. I can\'t say it is any more likely to be correctly categorized as a quasar but the blue color can be an indicator.

There\'s one asteroid identified in the image. I found a second in the raw FITS but it was too faint to make it into a color composite image. Conditions went downhill as I took this data as shown by the asteroid trail getting fainter as it moved northwest during the 40 minutes of the exposure. Color data, mainly green and red, taken after the luminance were hit even worse, with the great very weak. I had to include some pseudo green created from the red and blue data much as is done when making a color image from red and blue POSS plates though with some green data to help guide the process. Also seeing was off and on lousy during the color data phase bothering some stars more than others and creating color arcs on some stars and not others. I tried deconvolving the red and green to match the blue but was not totally successful. Due to the increasing clouds, this image doesn\'t go as deep as usual. 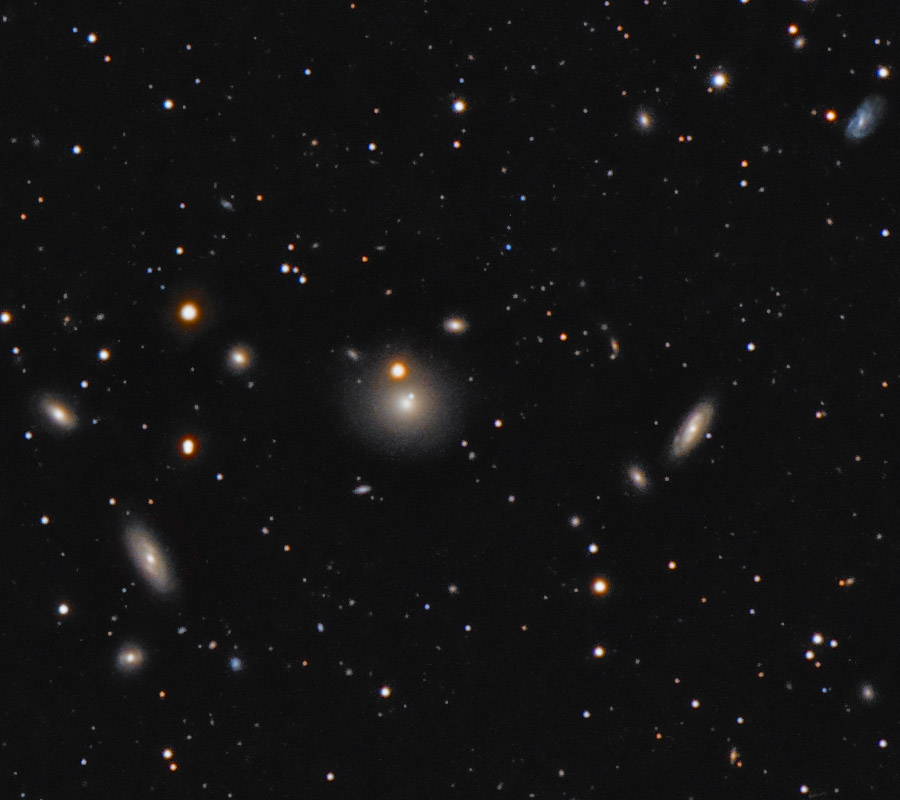 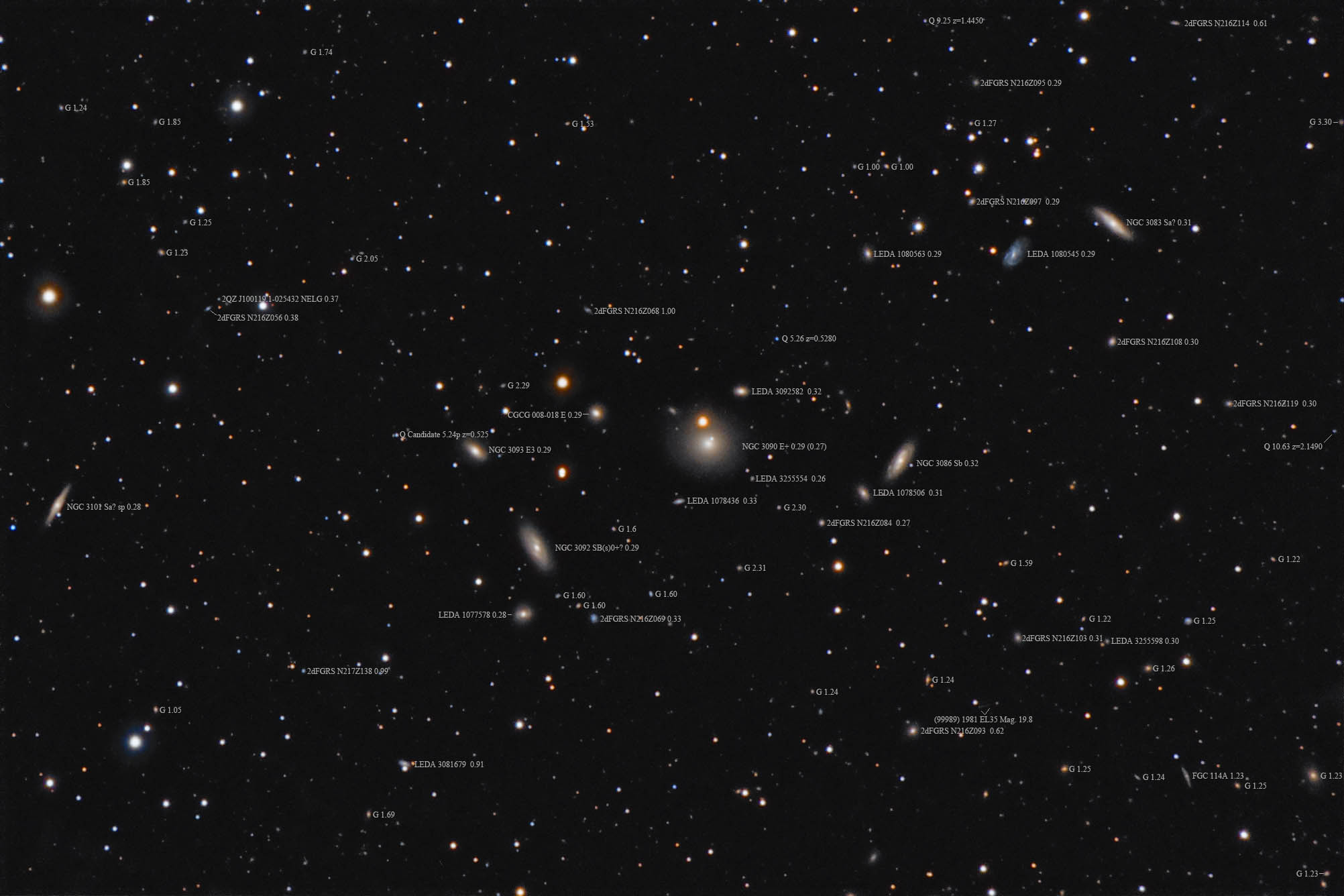 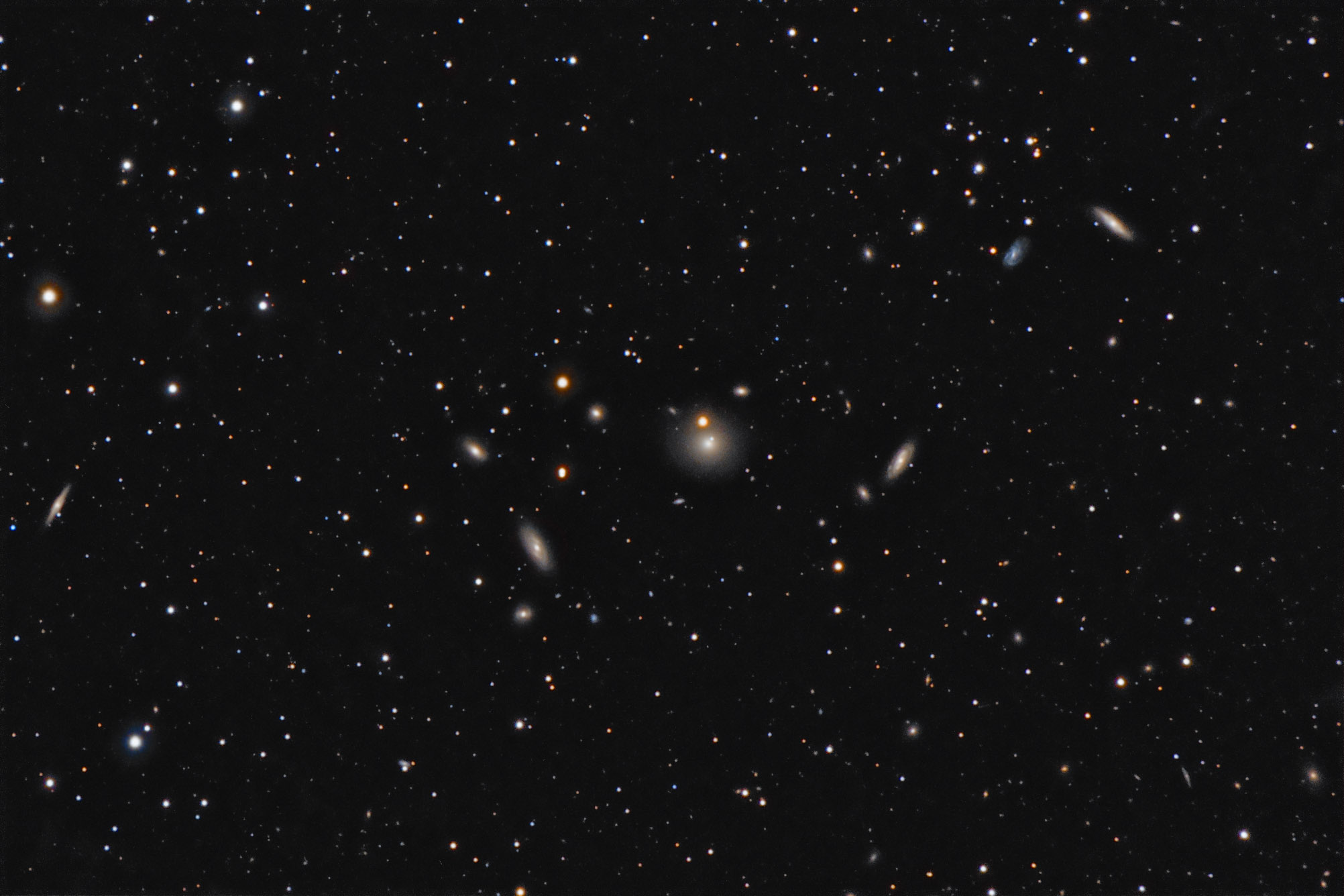