NGC 3162 is a distorted near face on spiral galaxy in the neck of Leo the Lion about 72 to 74 million light-years distant by redshift and non-redshift measurements. One paper describes it \"NGC 3162 is an Sbc spiral of low inclination. One arm is prominent, the other one much weaker. This could be a consequence of an interaction.\" I find no nearby galaxy it might have interacted with. Only PGC 029756 is in the image at the right distance. It is rather small and undistorted making it an unlikely candidate.

It could be due to something it ate long ago I suppose. The annotated image points to a small round object with a redshift the same as the galaxy. NED refers to it a being part of the galaxy, that is, a star cloud in it, though it is unusually round for one also very blue as these clouds often are. But instead, could it be the core of whatever this guy ate causing its odd shape? I found no papers discussing this so it is pure unsupported conjecture on my part.

Anyway, it has a nice arm with a long spur coming from it but the other side of the galaxy only has a short tightly wrapped arm. The spur seems to then cause a huge very blue low surface brightness arm that nearly doubles the size of the galaxy. Even with this arm, I measure its size as a bit less than 65 million light-years.

The galaxy was discovered by William Herschel on March 12, 1784. It is in the second Herschel 400 program. It is listed twice in the NGC. It was discovered by Heinrich d\'Arrest nearly 80 years later on February 21, 1863. But he got the position wrong causing it to get its own entry in the NGC when Dreyer apparently didn\'t catch the error.

The rest of the field is rather unremarkable with the usual background of distant galaxies and quasars. Most are listed at NED as quasar candidates but I suspect they are likely quasars due to their brightness and distance. Little else could be that bright and distant. Also, 3 asteroids barely show in the raw FITS data but loses due to the JPG process made them so faint I didn\'t bother to point them out. They were about 21st magnitude and moving rapidly making them hard to pick up. 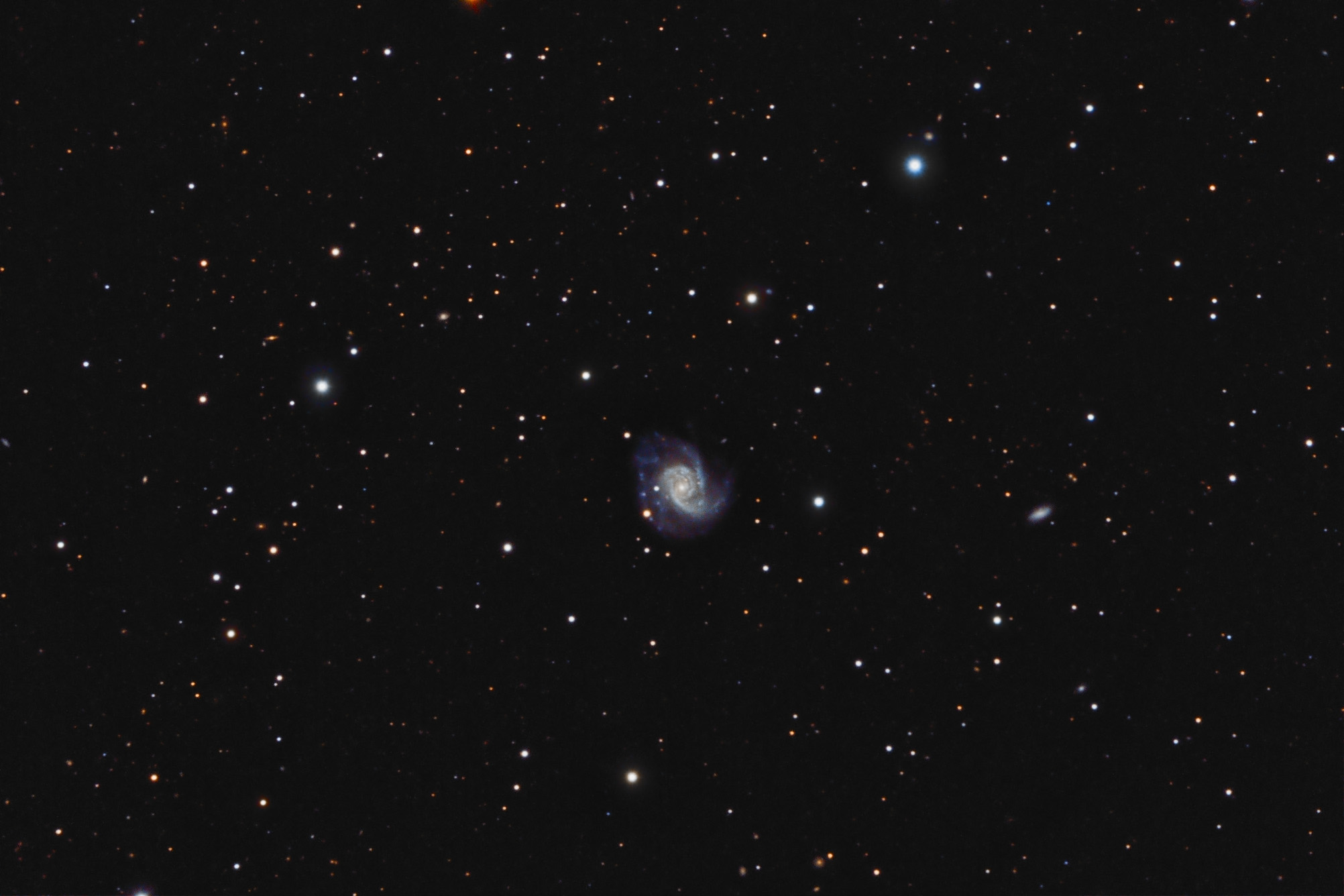 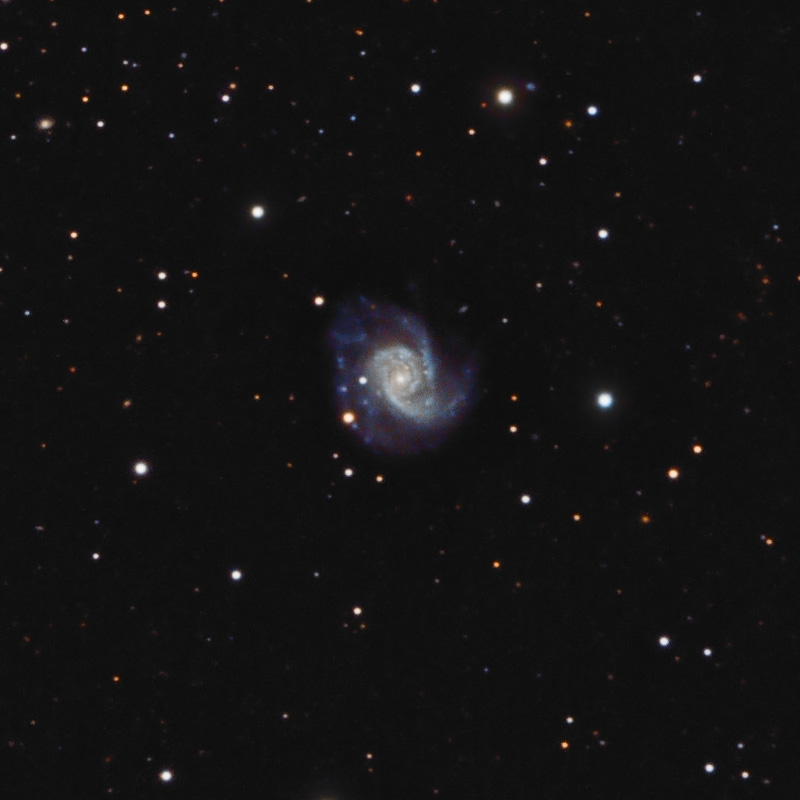 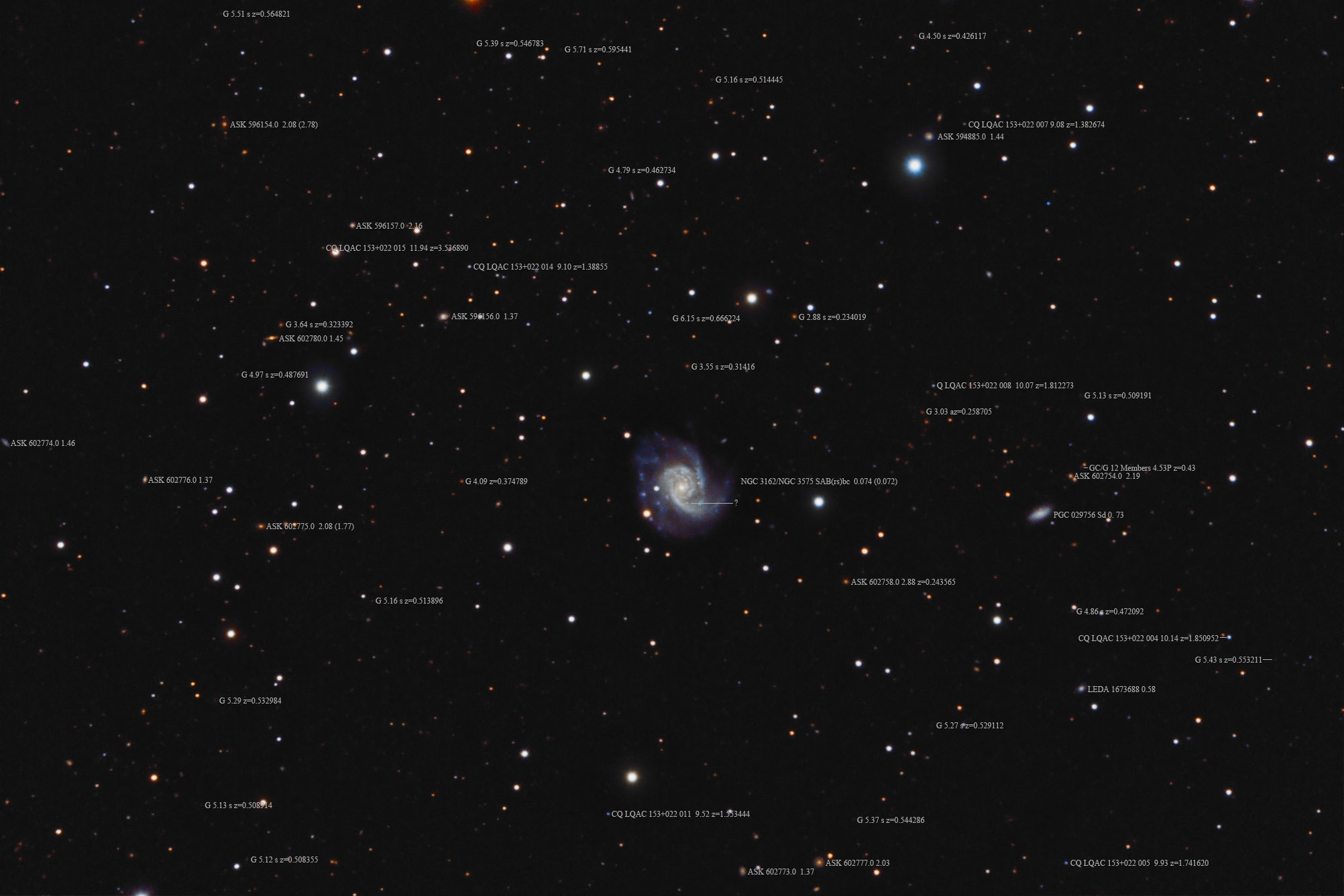