NGC 3166 and 3169 are a pair of interacting galaxies Arp somehow missed. Third NGC galaxy is NGC 3165. All three are at the same redshift distance with any differences being within measurement error and relative velocity as they encounter each other. All three appear distorted with NGC 2169 on the east side being really tore up with tidal clouds and plumes everywhere. Some images indicate a curving plume from 3166 going southeast then back northeast to 3169. It is broken, not continuous in my image. Likely due to my very short exposure time. A much broader connection seems to go directly east/west between the two so it is hard to tell where one ends and the other begins. With all the debris from their interaction, I don\'t understand way Arp didn\'t include this one in his atlas of peculiar galaxies. They are located in Sextans about 73 to 78 million light-years away. If this is correct these are two very large galaxies. NGC 3166 would be about 120 thousand light-years across. NGC 3169 would be 145 thousand light-years across. \"Little\" NGC 3165 would be 33 thousand light-years in diameter.

While NGC 3165 shows no plumes it has a very odd structure.
NED classes it as SA(s)dm indicating it is a Magellanic type galaxy. The NGC Project just classes it as an irregular galaxy. Is it naturally this way or is this due to interaction with the other two, far larger galaxies? NGC 3166 is classed by NED as SAB(rs)0/a;HII LINER. NGC Project says simply S0 or Sa. Odd as it appears to me to have a very strong, short bar. NGC 3169 is classed by NED as SA(s)a pec;HII LINER while the NGC project just says Sa.

A very low surface brightness galaxy SDSS J101329.62+032655.1 lies above NGC 3165 and a bit northwest of NGC 3166. It appears to be a disk galaxy with a faint nucleus. NED has no redshift data for it. Is it related to the other three? Then there\'s KDG 068 to the southeast of NGC 3166. It is classed as a dwarf galaxy though it is hard to tell from some of the debris from the two main interacting galaxies. North of NGC 3169 is a fuzzy horizontal streak I took to be debris. At its eastern end, NED using Sloan data sees a galaxy of 18th magnitude (that would be quite bright in my image) that is 12 seconds of arc by 2 seconds of arc. The entire streak is over a minute of arc long by about 0.2 minutes thick and might be 18th magnitude if condensed to a point. So is this what they show as being SDSS J101415.65+033413.3? To me, it is just more pieces ripped from the galaxy. I could repeat this with other tidal pieces as well. I think this just shows that automatic recognition of galaxies can fail under certain circumstances.

There are 7 quasars in the image. Some are marked UvES for Ultraviolet Excess Sources which are quasar candidates. One is marked as a quasar and as a galaxy with an AGN (Active Galactic Nucleus). It too is likely a quasar that is mostly hidden from our view by the core of the galaxy. Arp thought, and may still think, that a quasar\'s redshift was not cosmological and that they were ejected from highly disturbed galaxies such as these. Four close to one of them would likely be seen as significant to his theories. Yet another reason I\'m surprised he didn\'t include them in his atlas. Though likely the quasars weren\'t recognized as such at that time.

Unfortunately, I had that one stubborn set screw come loose again on the camera so the left side isn\'t well focused. Also seeing was poor. I need to redo this one with a lot more time but the way the weather has been this year it isn\'t looking likely this galaxy season.

Just too many galaxy and too little time. 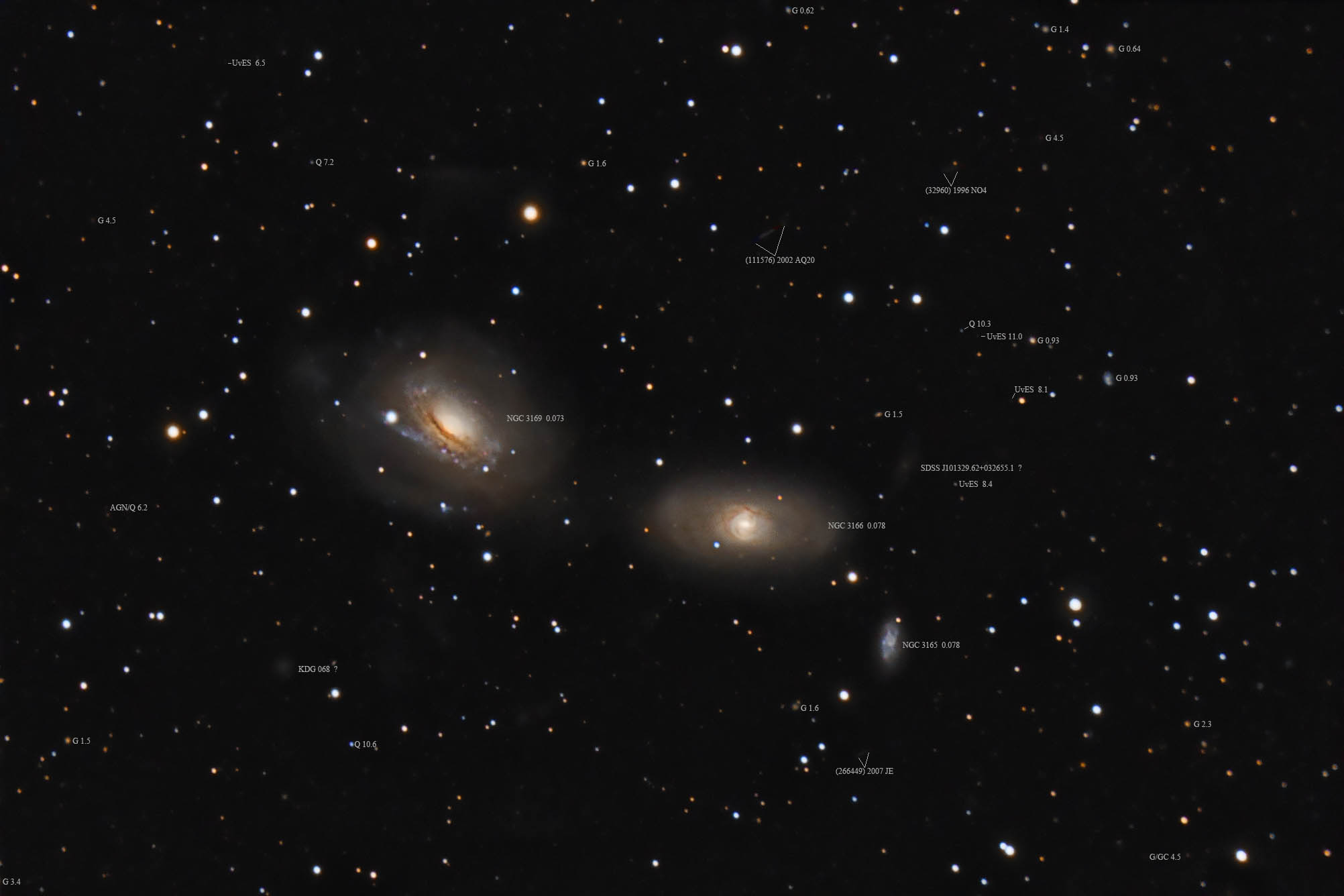 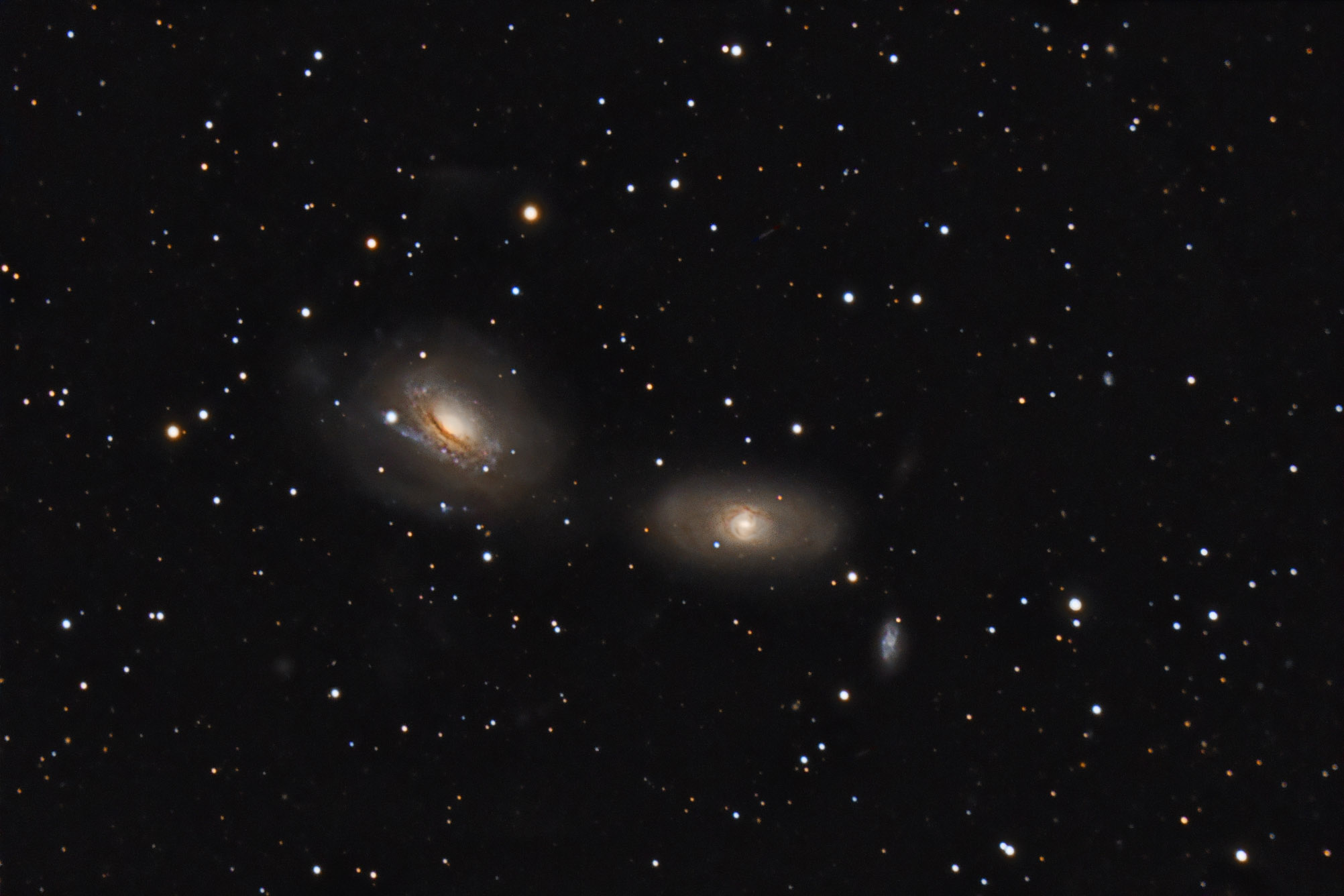