NGC 3184 is a classic face on spiral galaxy in southern Ursa Major near one of the bears back feet. It made my list as it is one of the original Herschel 400 objects that I\'m slowly working on. Also, it is a neat spiral that is overlooked by most imagers. William Herschel discovered it on the night of March 18, 1787. My visual notes with my 10\" f/5 scope on May 4, 1984 at 10:15 CDT reads: Beautiful face on spiral, round with much arm detail. How did Messier miss this one? The nucleus is ill-defined. Hard to understand how this was a difficult object in an 8\" scope.\" This refers apparently to the preliminary text I had of the list in which the person making the comments used an 8\" scope and found this a difficult object. I no longer have that text. I went on to add: \"Was he viewing from Central Park in NYC?.\"

In any case, the part about my finding the core ill-defined certainly isn\'t the case with my digital image. Though I had to watch the stretch of the core to preserve the spiral structure in to the very core. Most online images show it pretty well burned in with a lot of the spiral structure lost. In this case, both the redshift and Tully Fisher distance estimates are in close agreement. It is about 38 million light-years distant. Assuming that is correct I get a size of about 95,000 light-years though see faint hints of it extending another 15 million light-years to the south. I\'d need more exposure time to verify that.

NED classifies it as SAB(rs)cd with HII. Radio shows a very strong bar in CO. While the bright arms do come from an area away from the core as if there were a bar I see none at visual wavelengths and the faint arm structure continues to spiral in to within a few seconds of arc of the core. The NGC Project goes with the visual and says Sc (no bar). I am picking up a few hints of pink HII regions but most are below my resolution even though this was a better night than average for seeing. Transparency was poor due to a haze, however. The haze likely stabilized the seeing. 6.5 magnitude HD 89053, an M2 giant cast a horrid red gradient over the image thanks to the haze layer preceding the 3\" of snow that shut me down that night. This is likely why I didn\'t think the data worth processing. Fortunately, I\'m getting better at dealing with such issues and pretty well eliminated it at the cost of some background faint fuzzies in the area of the star.

This active galaxy has had two or three supernova in the last 100 years. SN 1937F, SN 2010d and SN 1999gi. SN 2010d might have been an outburst of a Luminous Blue Variable rather than a SN. I don\'t know why they can\'t tell for sure which it was. LBV stars are interesting. For those wishing to read up on them, this paper might help: http://adsabs.harvard.edu/abs/1994PASP..106.1025H Or just think Eta Carinae. Its likely the most famous LBV.

The galaxy is also the home of two other NGC objects. NGC 3181 is certainly a bright HII region I\'ve pointed to in the annotated image. NGC 3180 is harder to pin down. The NGC Project says: \"NGC 3180 is a star cloud or HII region in NGC 3184\'s northwestern arm. The position in NGC (by Dreyer from LdR\'s observations) fits the star cloud better, but the HII region is brighter, though smaller. The number may well apply to both objects or simply the general area of the arm where they are found.\" I\'ve pointed to both in the annotated image. I can\'t see either as an obvious candidate, however.

To the southeast of NGC 3184 is a galaxy that depending on which catalog you consult is either just a galaxy or a quasar or a galaxy with an AGN1 core or one with a Seyfert 1 core. Take your pick. It is known only by coordinates in each of these catalogs so I\'ve only listed it as G/Q/AGN1/SY1. To the north near the top edge, a bit left of center is ASK 314681.0 which had two separate entries in NED. One as an AGN1 using only coordinates for a label and then as the ASK object as well as others again only by coordinates as a BLAGN candidate. That stands for Broad Line Active Galaxy Nucleus. The core is burned in my image so is very bright compared to the star disk around it. To the south of NGC 3184 is ASK 314329.0. It is listed as an AGN1 and appears starlike in my image but in the Sloan image, it has a faint bit of fuzz around it. Another galaxy with a super bright core.

The galaxy NGC 3184 is about 40 million light-years distant so the star actually exploded 40 million years ago; its light just now reaching us. In the animated image, it is the lower right of two stars to the upper left of the galaxy\'s core. See the animated link to see a before and after image. The star may be one of many in a small blue star cluster seen in the before image as a blue object. It appears to be on the upper right edge of this little blue blob of stars. This galaxy hosted other supernovae in 1999, 1937 and 1921. That\'s far more often than in most galaxies, ours included.

In the animated image a few stars in the galaxy will change brightness a bit. This is due to much poorer conditions the night the supernova was imaged. Field stars beyond the galaxy are all from the 2014 image so don\'t show this effect. I thought I had equalized the stars in both images, obviously that wasn\'t quite correct. 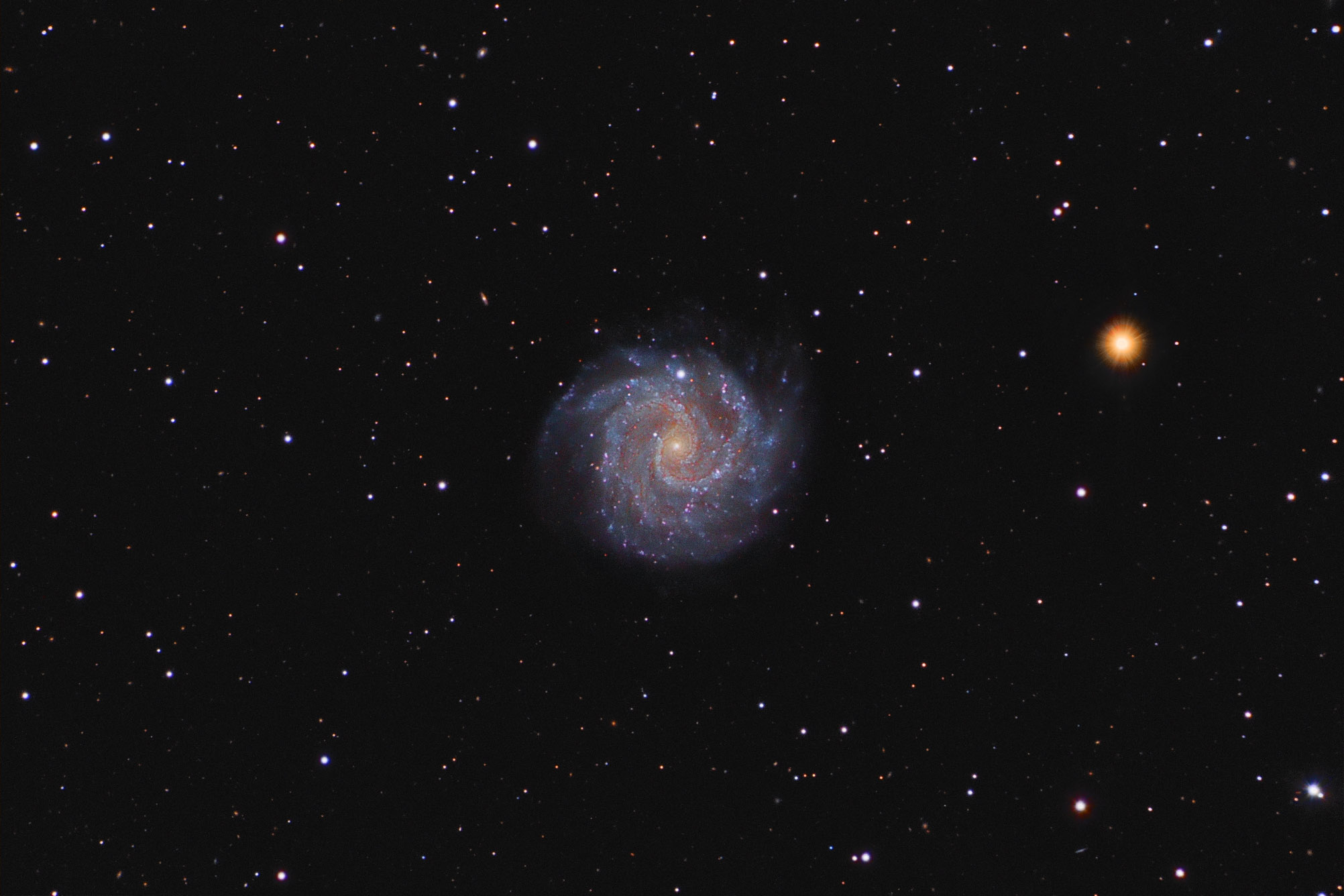 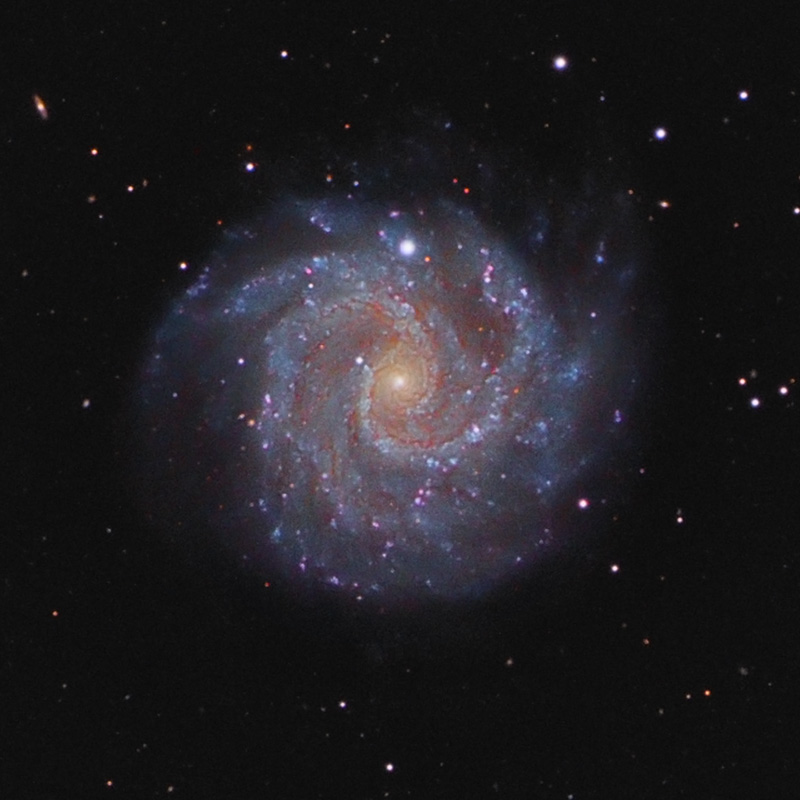 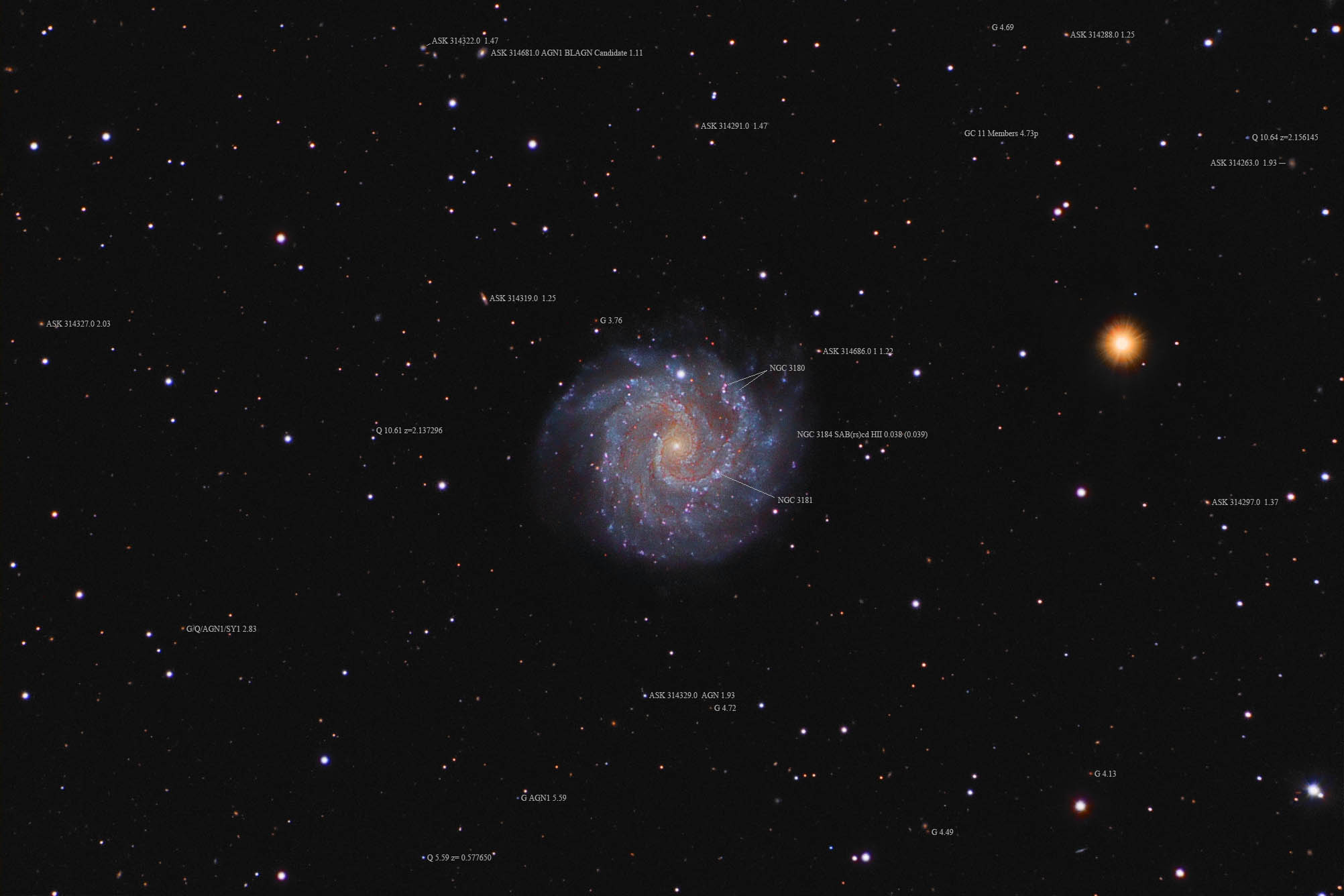