NGC 3205 is one of three galaxies in the LDCE 0722 galaxy group. It consists of three mostly red and dead spiral galaxies all seen rather face on. They are located in the hind feet of Ursa Major about 320 to 330 million light-years from us. NGC 3205 was my main subject as it has plumes indicating it has either had a near collision with another galaxy or is still digesting something it ate. I favor the latter as nothing else in the area appears obviously disturbed but NGC 3507 has hints of a faint plume to the northeast and the plume of 3205 extends almost to 3507. NGC 3205 is shown simply as S? by NED. The NGC Project says only pec even though it is an obvious spiral. Seligman comes in with Sa?? pec. I don\'t know what 2 question marks mean. Including the faintest parts of the plumes, I get a size of about 225,000 light-years. Including only the obvious plumes it is 140,000 light-years in size, still a large galaxy. It is the reddest of the three. That may be due to its gas and dust being either ejected or heated thus stopping star formation as a result of its interaction with another galaxy some billion years ago or so.

NGC 3202 is listed at NED as Sb(r)a. The inner arms from the bar forming a ring that other arms come off from, two from the north end and one from the southern end. These arms are slightly blue indicating some but not much star formation is still going on there at least in the more recent past. The NGC Project, however, classifies it as SBa ignoring the ring. Seligman also ignores the ring but seems to love question marks showing it as SBa??. I measure it at about 110,000 light-years across.

NGC 3207 is shown as having an AGN at its core and is listed simply as S? by NED. The NGC Project, however, says simply pec and Seligman, true to its love of question marks says pec??. Including its faint halo, I get a size of about 160,000 light-years. So all three of these galaxies are quite large. NED shows a galaxy cluster with a count of 12 seen through the southwest edge of the galaxy. The photographic redshift puts it 4.57 billion light-years distant. But the bright cluster galaxy anchoring the group has a spectroscopic redshift of 3.88 billion light-years, putting it much closer. Either it isn\'t part of the cluster or the photographic redshift has a surprisingly large error. I don\'t know which or some combination is the true explanation.

All were discovered by William Herschel on February 3, 1788. None are in either of the Herschel 400 observing programs. Several dwarf galaxies that lie at the same distance can be seen scattered around the field as noted in the annotated image. Only one other normal galaxy is in the image that is obviously part of the same group though not listed as part of the LDCE 0722 group of three. That is UGC 5578 at the very bottom of my image. Shown as Scd: by NED it measures some 145,000 light-years across. It just seems smaller since it is seen close to edge on. It seems the most normal of the group to my eye.

I was surprised by how many rather bright galaxies weren\'t listed at NED or SIMBAD with other than positional designations. Those are simply listed as G in the in the annotated image. Same for quasars, Q, which also are listed only by position. A couple quasars have a z value of over 3 which places them over 11 billion light-years distant, that light was emitted when the universe was only a bit over 2 billion years old. The wavelengths we see were deep in the ultraviolet when emitted. Their wavelength stretched by more than 4 times by the universe\'s expansion over those 11+ billion years. One asteroid snuck in at the top of the image. It was moving rather fast in prograde motion so rather dim for its magnitude. Asteroids mid prograde motion are much faster than those in mid retrograde motion as they have to make up for time lost going backwards. 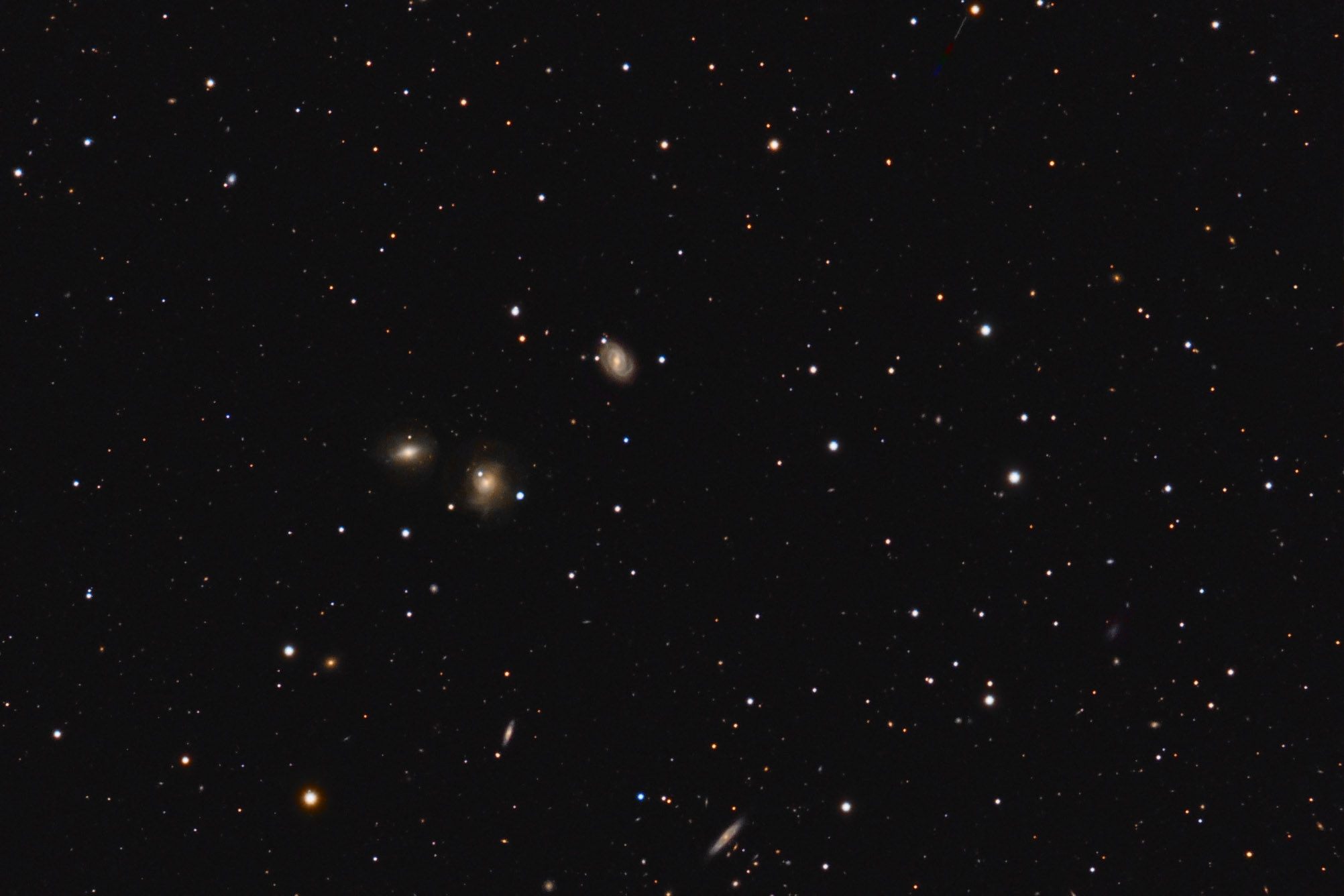 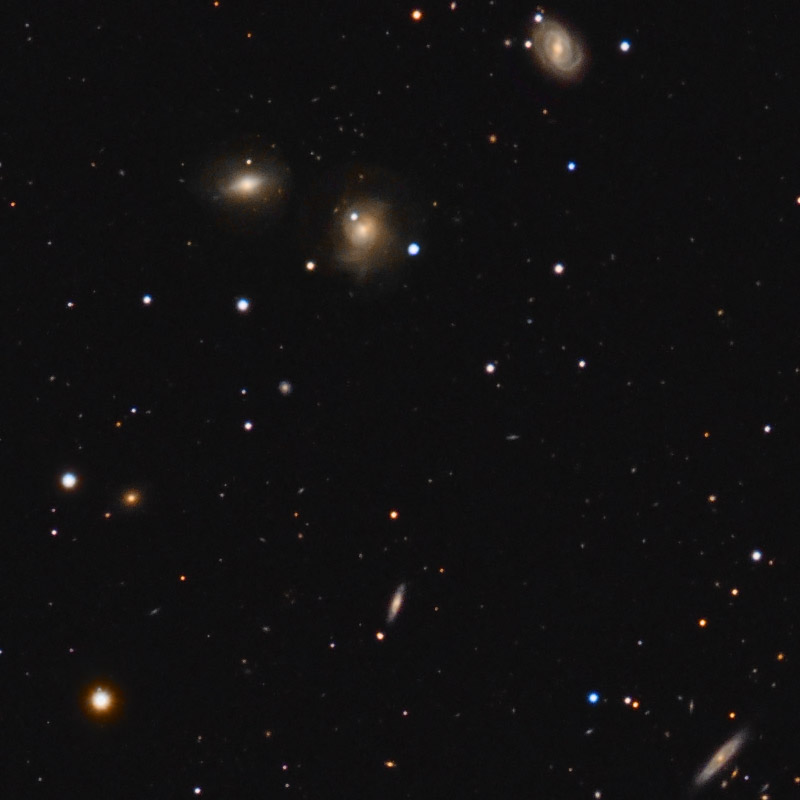 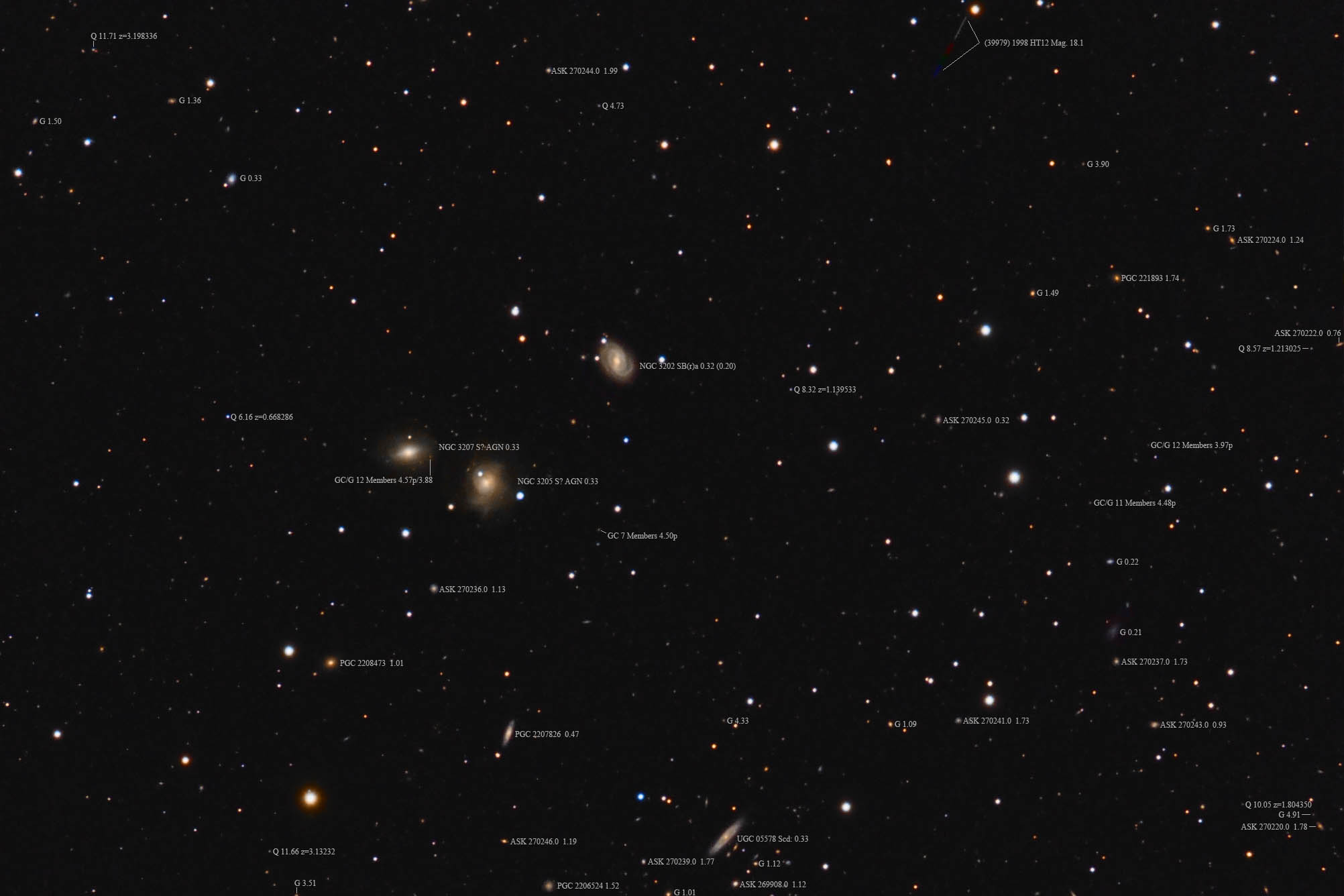