NGC 3299, NGC 3306 and CGCG 065-069 are a trio of unrelated galaxies in Leo just west of the M95-96-105 group. Being unrelated I\'ll cover them separately. NGC 3299 is a low surface brightness galaxy with little detail seen even though it is face on to us. While its distance by redshift is 46 million light-years that is likely too far. Tully Fisher measurements put it only 18 million light-years away. If the latter it is only 12,600 light-years across though it is 32,300 light-years across if the larger distance is accepted. Quite a disparity. It is classed as SAB(s)dm at NED and S(B)dm at the NGC Project, which makes it a barred spiral though the bar is extremely difficult to see. It was discovered by William Herschel in 1784 using his 18.7\" reflector. Since I\'ve seen reports of it requiring averted vision to be seen in a 17.5\" scope today it must have been near Herschel\'s visual limit when discovered. Several galaxies can be seen right through its thin disk. I\'ve marked the one that has redshift distance data. I\'m a bit suspicious about the distant galaxies entry in NED however. It\'s distance of 3.1 billion light-years seems reasonable enough, what bothers me is NED classifying it. Since it shows as only a couple pixels in size how they determine it to be an Sdm galaxy I can\'t fathom. Of all the galaxies at this distance I\'ve seen in NED this is the first they listed with a classification.

NGC 3306 is sometimes called a companion of NGC 3299 but that is only a line of sight illusion. It\'s distance by redshift is 150 million light-years and grows to nearly 170 million light-years by Tully Fisher measurements. A rather good agreement this time. It is classed as SB(s)m? by NED and Sc? by the NGC Project. Even though much further away it is easier to see visually by all reports though oddly both William and John Herschel missed it when looking at the nearby but far fainter NGC 3299. Its discovery had to wait for another 102 years, until 1886 when Lewis Swift found it in a 16\" refractor. I\'ve seen it, just barely, in my 10\" f/5 scope but not NGC 3299 even though it is listed as being a magnitude fainter than NGC 3299. It\'s light is spread out over a much smaller area making it much easier to find.

CGCG 065-069 is a more normal looking spiral but its two arms are quite unsymmetrical. It is classed as Sc by NED. It is by far the most distant of the trio. Also the one I was able to find the least on.

There\'s a lot going on in the image as shown by the annotated image. Between the two NGC galaxies is a pair of very blue galaxies. The western one has a distance of 460 million light-years. No distance data is available for the one abutting it to the east. Are they a colliding pair? I see no plumes so they are likely further away from each other than they appear or this is their initial meeting so there hasn\'t been times for plumes or distortion to set in.

Below NGC 3299 near the bottom of the image is ASK 430799 at 2.16 billion light-years. It does have some interesting plumes which make it nearly 200,000 light-years across. Unfortunately I found nothing more on it however. The ASK catalog was new to me and new to NED as they too didn\'t list it as a catalog when I clicked on the link to tell me more about the catalog it came back with it being a designation recognized by NED. A bit more digging and I found it stands for \"Automatic Spectroscopic K-means-based classification\" and NED now has over 700,000 entries from this catalog yet doesn\'t seem to know it as yet. So what does this mean? You can read all about it (put on the hip waders) at: http://iopscience.iop.org/0004-637X/714/1/487/pdf/0004-637X_714_1_487.pdf

Several galaxy clusters are in the image. Only those with a defined Big Cluster Galaxy are shown in the annotated image as the rest were too uncertain for me to include. Seeing was poor for this one and got worse during the imaging with the blue frames really tore up with 6\" seeing which makes separating galaxy from star difficult so I didn\'t attempt it. If the distance estimate was done photographically I\'ve indicated that with a \"p\" after the distance. Usually the distance for the BCG was slightly different and often did have spectroscopic redshift data (no \"p\"). Likely this latter distance estimate is more accurate.

The distance to quasars is so confusing due to relativity issues that besides a light travel time distance I\'ve listed their redshift z value showing how much their light is red shifted. A z of 1 means the wavelength has doubled in value due to its expansion velocity. 2 means it is tripled. So a spectral line in the near ultra violet is now in the near infra red part of the spectrum for a z=2 quasar. We are seeing its deep ultra violet light shifted into the visual spectrum. Even so a quasar with a z=2.155987 appears very blue in the image indicating it is very bright in the very deep part of the ultra violet spectrum. Now that is hot!

There are three asteroids in the image. See the annotated image for their details. 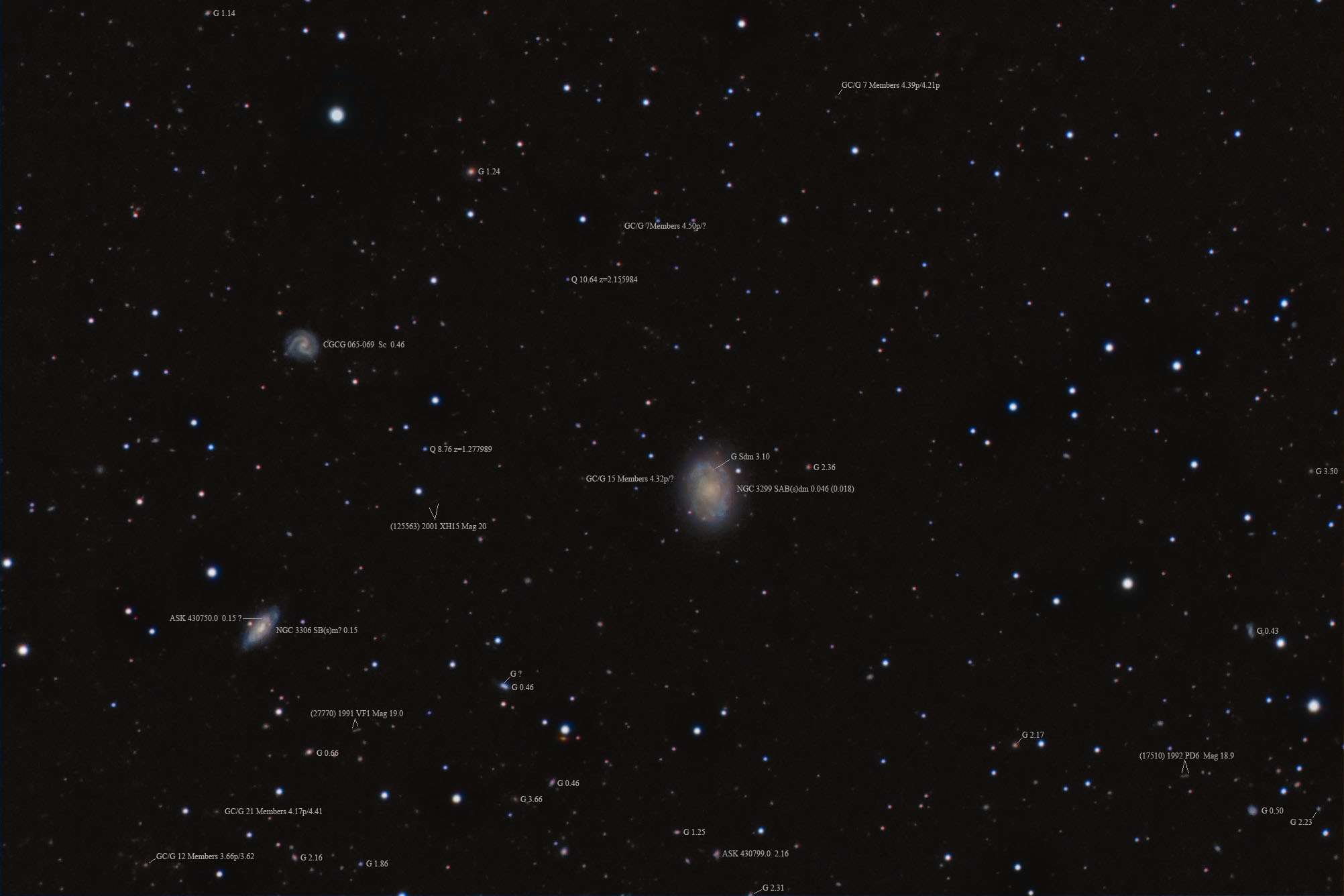 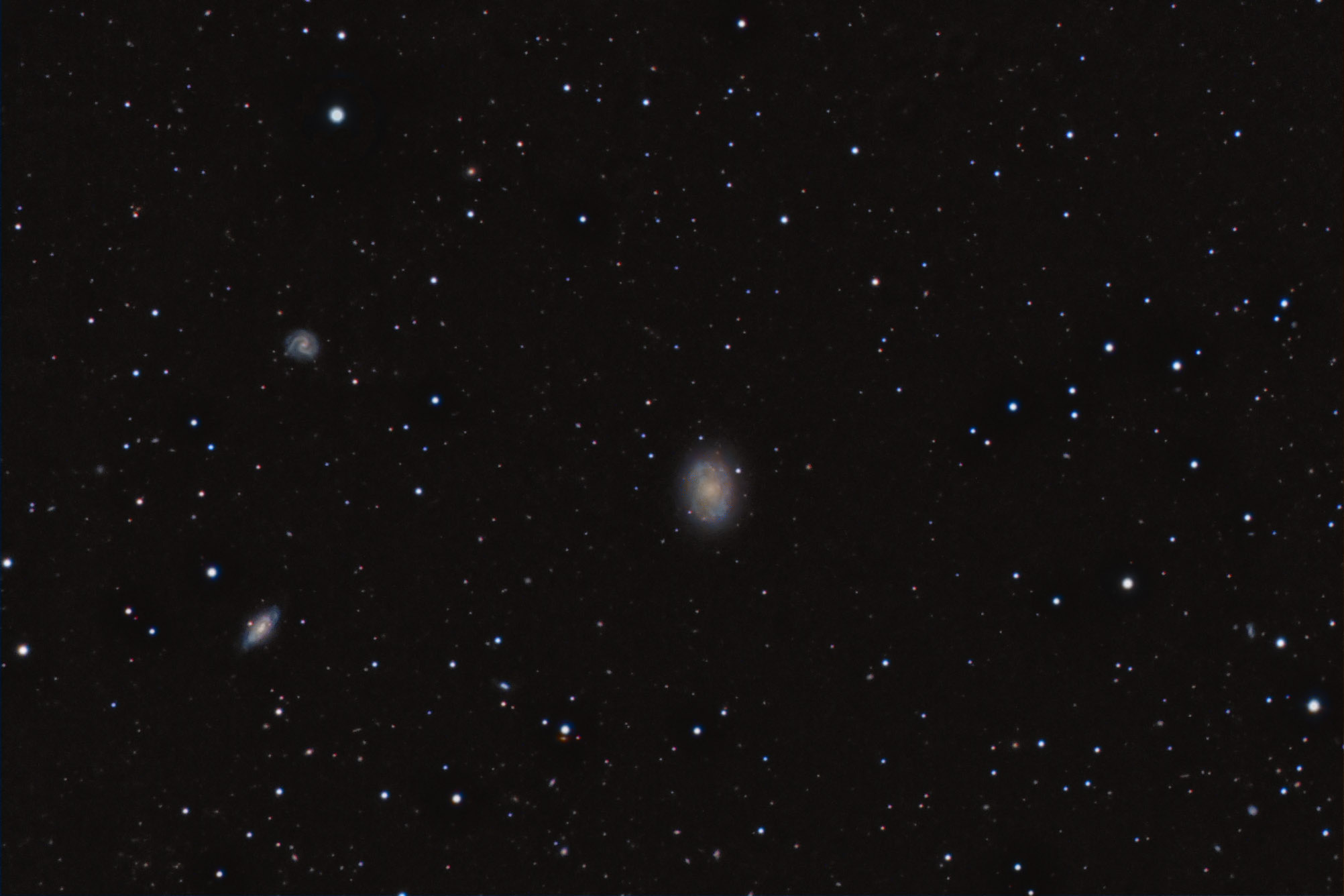