NGC 3332/NGC 3342 is a shell galaxy in Leo 2.6° south of M95. Redshift puts it about 28 million light-years from us. The median of 11 measurements of a type 1A supernova SN 2005ki put it about 27 million light-years away. Surprisingly good agreement. It was discovered twice by William Herschel. Once on January 18, 1784 as NGC 3342 and again on March 4, 1796, as NGC 3332. Actually, he used his own notation that was converted to NGC numbers for the catalog based on his listed Right Ascension. His position for NGC 3332 was incorrect so wasn\'t recognized as a duplicate. Herschel\'s notes for what is now his NGC 3342 position reads: \"The faintest and smallest nebula imaginable. I viewed it a long while and with a higher power than the sweeper. Having no person at the clock, I went in to write down the time and found it impossible to recover the nebula. It appeared like a vS nebulous star, and is probably of the cometic sort; there was another vS star south-following (I think, or rather, am pretty sure), and it preceded a pB * [the nebula is south-preceding of a star by a diagram, about 6 arcmin][JLED]. It should have been secured before I went into the light. Its place must be about 2 1/2 deg following rho Leonis and about 10 arcmin more north than that star.\"

While the galaxy is of low surface brightness it isn\'t as faint as Herschel\'s note would indicate. Conditions must have been rather poor that night or else he was looking at something else but the stars he mentions are correct for this galaxy.

The galaxy is a lonely shell galaxy. The shell, while faint is quite red indicating it is old since all the young and middle age stars are mostly gone. Shells of galaxies in clusters where most reside, since they are the result of a merger with another galaxy, quickly vanish either absorbed back into the galaxy or scattered further afield by interaction with others in the cluster. In this case, being a lone galaxy the shell has been able to survive for several billion years.

It isn\'t quite alone as two dwarf galaxies that have a somewhat similar redshift are in my field, AGC 202230.0 and ASK 279557.0. Two galaxies are seen through NGC 3332/42. The most obvious isn\'t even listed in NED which surprised me. The other is there but with no redshift data. All with redshift data are noted in the annotated image.

In early April I started having trouble with my filter wheel. When first fired up it wouldn\'t rotate. Sometimes powering the camera off and on fixed the issue. Other times I\'d have to go out, open the camera and replace the band the friction drive pushes against as it had come off. After 10 years of hard use it was stretched enough it wasn\'t holding on. At least I thought the trouble started in April. Turns out this February 25 image was the first sign of trouble and I didn\'t catch it. I went to process the image and found one third of it was through the luminance filter but then there was a dark band then the far eastern edge was taken through the H alpha filter so had little to no signal. When it rotated to the other filters the problem corrected itself and after that all was fine but I was short most of the luminance data for the eastern side. This is where taking the color data at the same binning as the luminance paid off. I used it to fill in for the missing luminance by creating a pseudo luminance from the color data and then blending it in using the lighten mode. I had to work the background heavily to hide the lower SN ratio of that part of the image but otherwise, I salvaged the image without cropping it severely leaving the galaxy on the edge of the cropped frame. The issue was due to the friction band being over 10 years old and had lost its stretch so barely held on to the groove it rides in. I fought the issue for some time before finally realizing the cause. I ordered a new band from SBIG and they were to send it out. But everyone left for NEAF and that didn\'t happen. The order reached shipping but had gotten no further until I was getting desperate after the band finally broke. I found the rubber bands the mailman used to bind my mail worked but had to be replaced every couple days or it too broke. After my second request, the new bands (they sent me two in one package) arrived and at no cost. After finding this image compromised I checked all those between this one and early April when the issue next appeared that I caught. Fortunately, I found no problem. So I think this is the only one with the issue but with some 25 objects between then and the band\'s replacement, there might be one I failed to notice. I sure hope not. I don\'t need any more processing nightmares like this one created.

I was surprised that I was able to pull out a bit more of the shell than I saw in any other image Google turned up for this galaxy. There weren\'t many which also surprised me as it does have a nice shell though it needs a lot more time than I gave it to really bring out. My sky was exceedingly bright (for me) with airglow the night I took this image so it doesn\'t go as deep as normal.

If using The Sky 6 to find this galaxy use NGC 3342 as NGC 3332 pointed me to the wrong position. Nothing was at the position in fact. 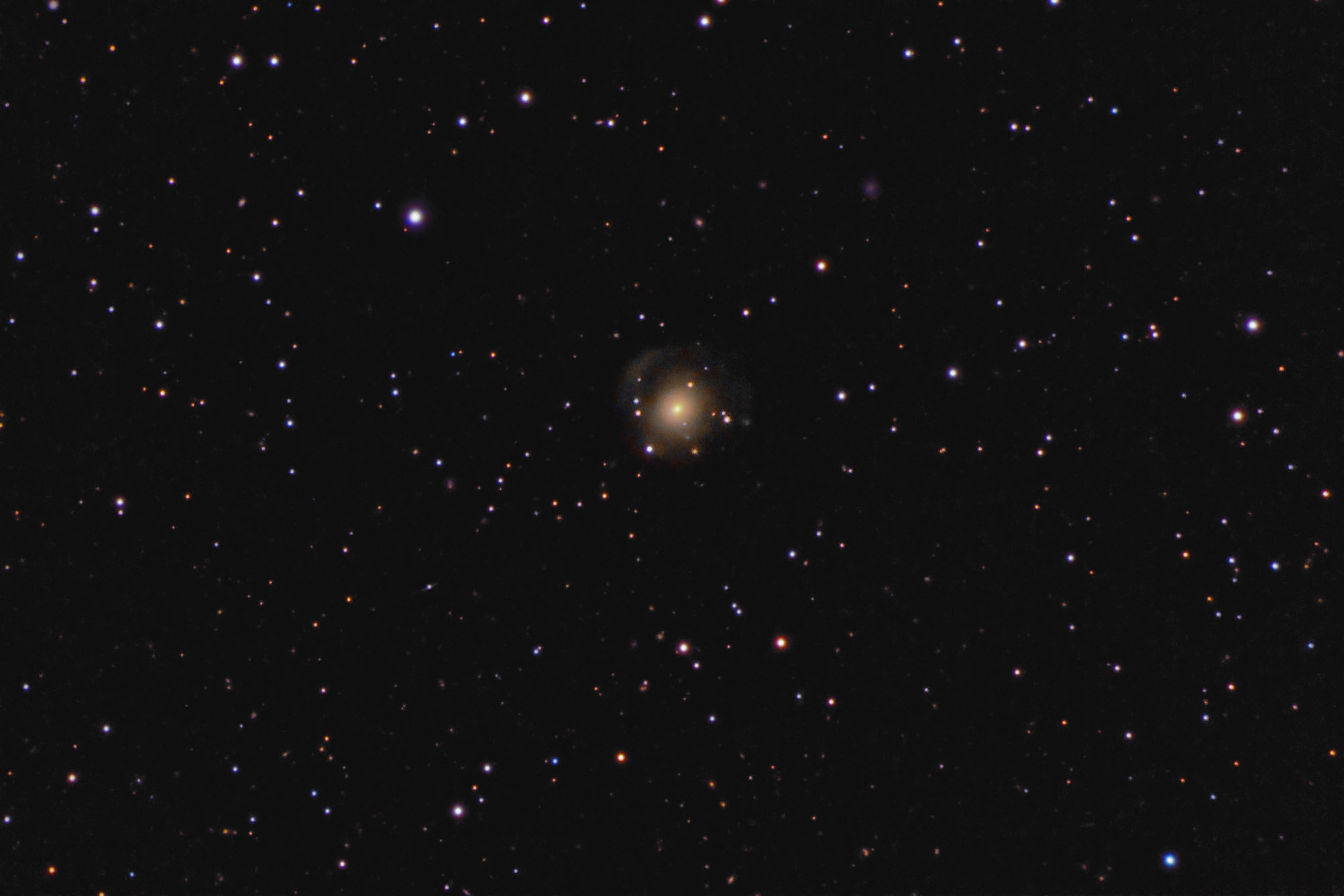 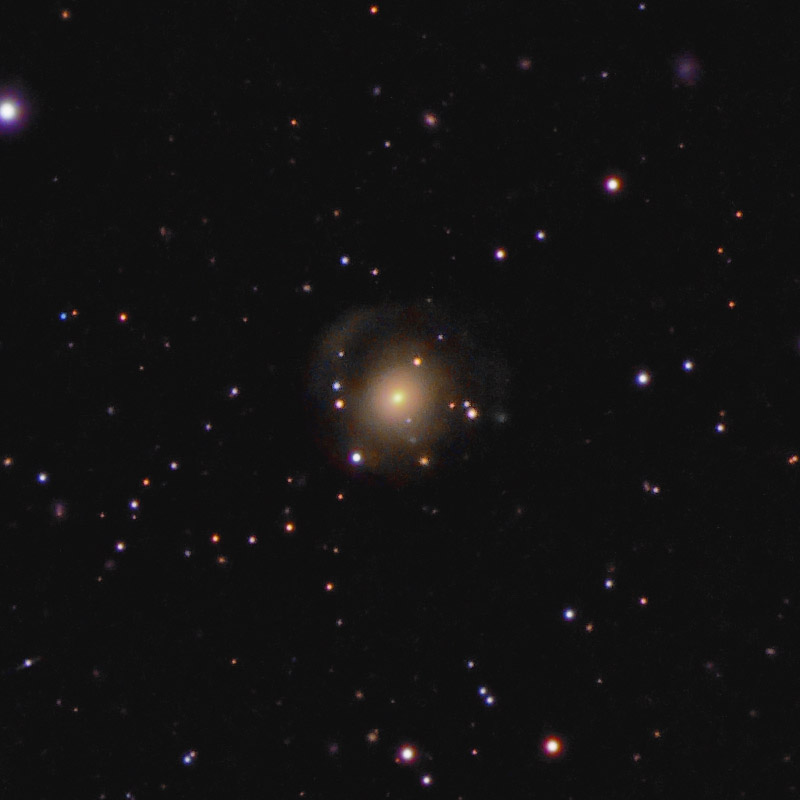 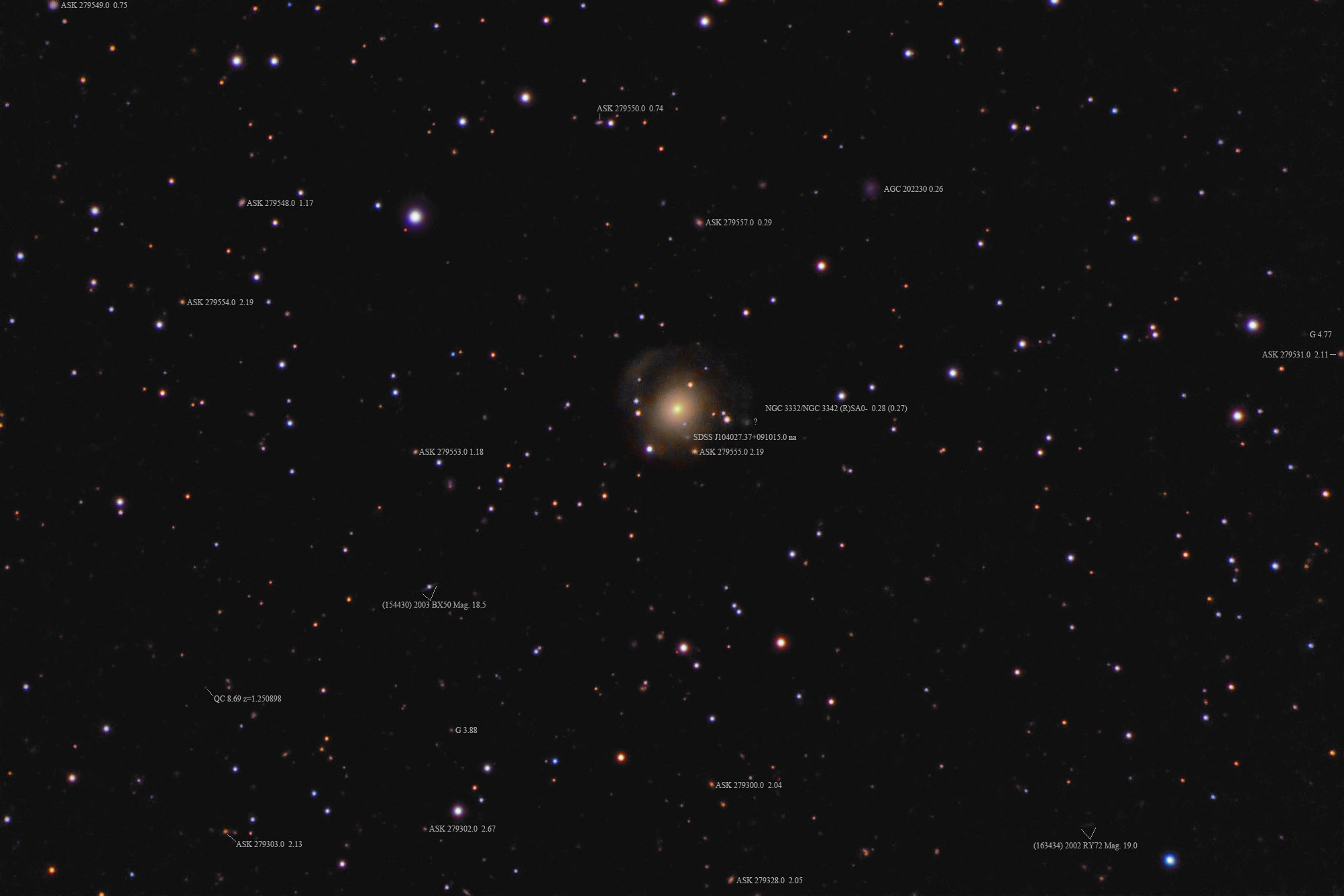