NGC 3359 is a nice barred spiral in Ursa Major about 50 light-years distant (redshift says 53, the Gemini page says 49 and other sources say about the same range). NED classes it as SB(rs)c, while the NGC project says SBc. Both mention it has strong HII emission. So why am I imaging a rather normal galaxy? It isn\'t as \"normal\" as it appears. For one it has over 100 large star forming regions, far more than most spiral galaxies and for another, the bar is thought to be only 400 to 500 million years old while the galaxy is likely at least 10 billion years or older. What triggers bar formation is a rather long-standing problem. Once formed do they last or are they temporary? These are still highly debatable subjects. At that distance, I didn\'t really expect to pick up many of its HII regions as most amateur images fail to pick them up unless blending in H alpha light. I was pleasantly surprised to discover the bigger ones did come through. Though to appreciate the vast number present in this galaxy see the Gemini North image at: http://www.gemini.edu/gallery/v/astronomical_images_and_illustrations/Galaxies/ngc3359v2.jpg.html

Their image is flipped to a mirror image with south (sort of) up and west to the right while my image has north up and west to the right. Theirs is a mirror image that wasn\'t corrected for display. You can read all about the galaxy at the Gemini link. Another unanswered question not mentioned at the Gemini link is why all the sudden star formation in every corner of the galaxy? There are no nearby galaxies to have triggered it. Nor does it look particularly disturbed yet the bar and likely the HII regions are very young compared to the age of the galaxy.

There is a smudge of a blue galaxy to the east-northeast of NGC 3359. Could it be involved in some way? It could if it was at the same distance though its mass is too small to cause much interaction unless it has already been stripped of its dust and gas in a close passage a billion years or so ago. It is SDSS J104713.26+631629.2 but NED has no redshift data so it could be too close or too distant to be involved. For now, it is an unknown. Though I see no hint of any tidal connection.

I\'ve noted a galaxy in the upper left corner. NED shows it at 2.7 billion light-years yet it shows some rather obvious spiral structure. NED lists it at 12.6\" of arc in size. That would work out to be 165,000 light years in diameter. A pretty big spiral.

The galaxy cluster west and a bit north of NGC 3359 is GMBCG J161.33127+63.27897 it and its anchor galaxy is listed at 4.2 billion light-years measured photographically. It is said to have 8 members but the size, as usual, is not given. Still, there are 4 other fuzzies in the immediate area and a few more a bit further out that are likely its members. Just southwest of it is another cluster, WHL J104515.8+631614, which is listed at 15 members. I see only the anchor galaxy which is listed at magnitude 23.1. Again no size is given. Looks like 23.1 is about the limit in this image.

Continuing with galaxy clusters, WHL J104452.7+631740 is near the right edge. It is listed as having 7 members. No distance is listed for the anchor galaxy which has the same coordinates as the cluster. GMBCG J161.17919+63.24738 is yet another cluster near the west (right) edge of the image. Only the cluster has redshift data but its coordinates match that of the anchoring galaxy. The cluster is said to have 12 members and be 4.4 billion light-years distant. No diameter was given for the cluster. GMBCG J161.15360+63.38777 is in the upper right corner. Its anchor galaxy is very red. While the distances to it and the cluster are slightly different they both round to 4.0 billion light-years. The cluster is listed as having 10 members in an unknown area. Even closer to the top in the right corner is WHL J104444.9+632500. The photographic distance estimate is 4.7 billion light-years with 8 members. The spectroscopic redshift of the BCG, however, shows a distance of 4.4 billion light-years. I assume that is more accurate for the cluster as well as the galaxy. Oddly the galaxy isn\'t as red as the closer galaxy anchoring the other cluster in that corner. 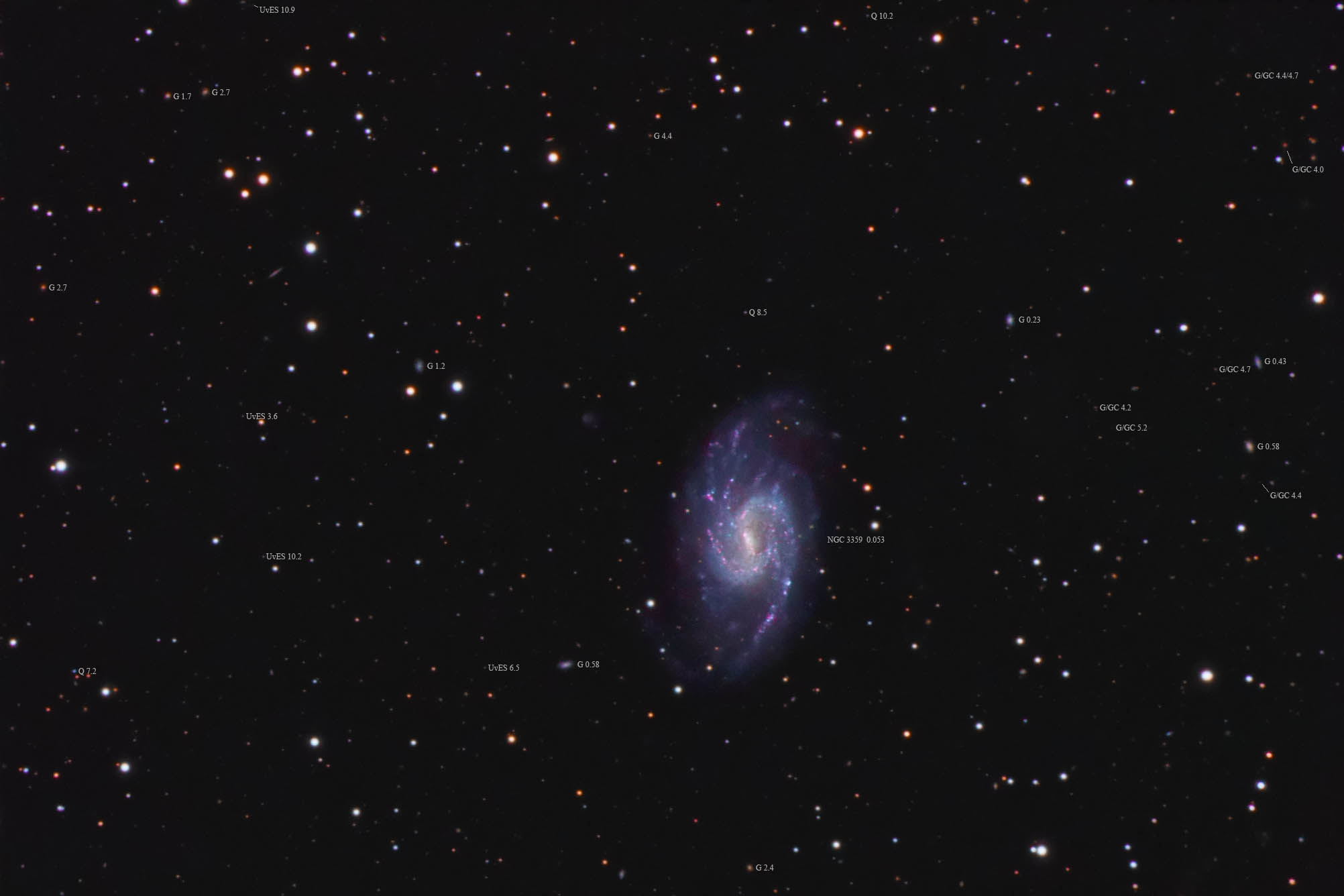 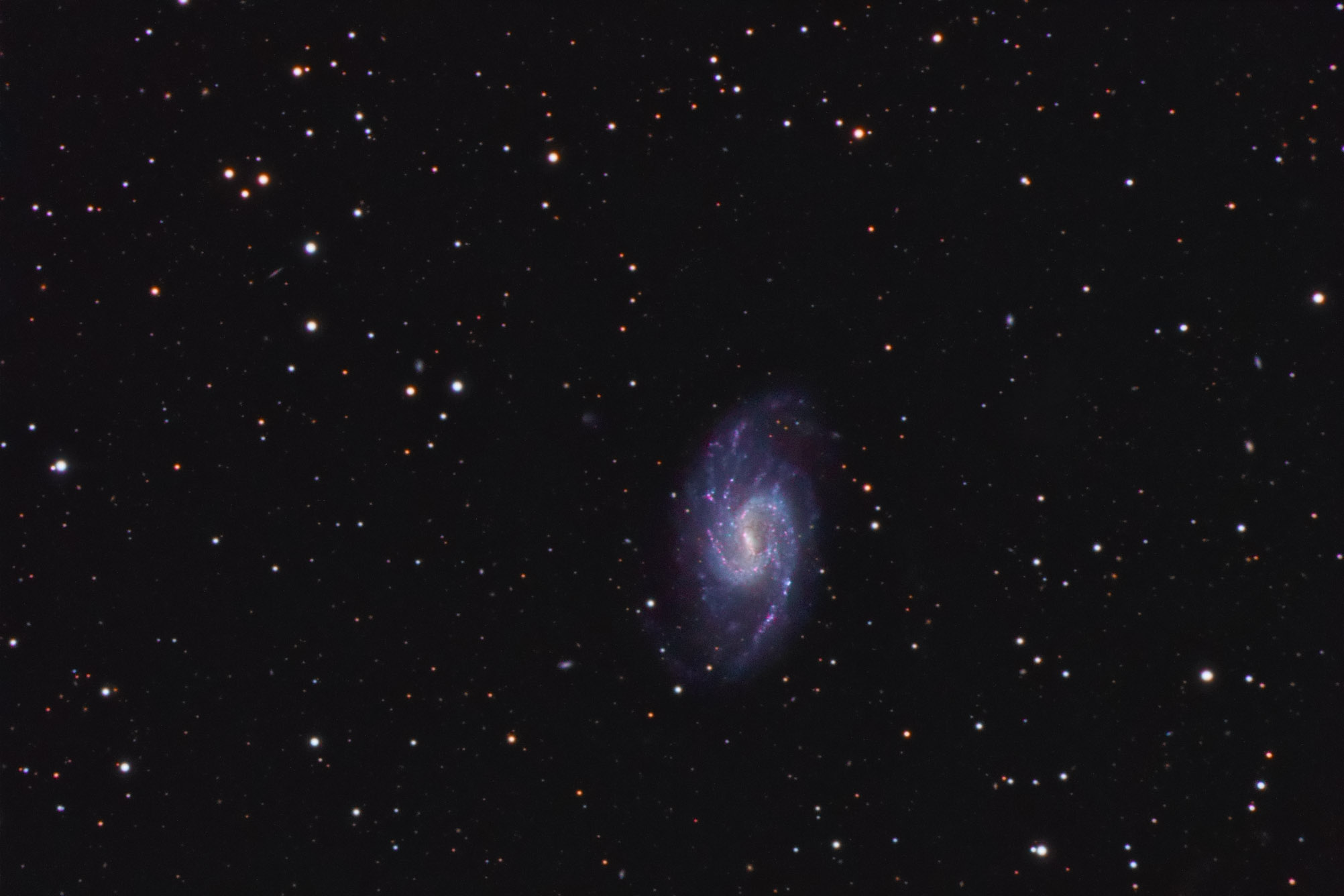 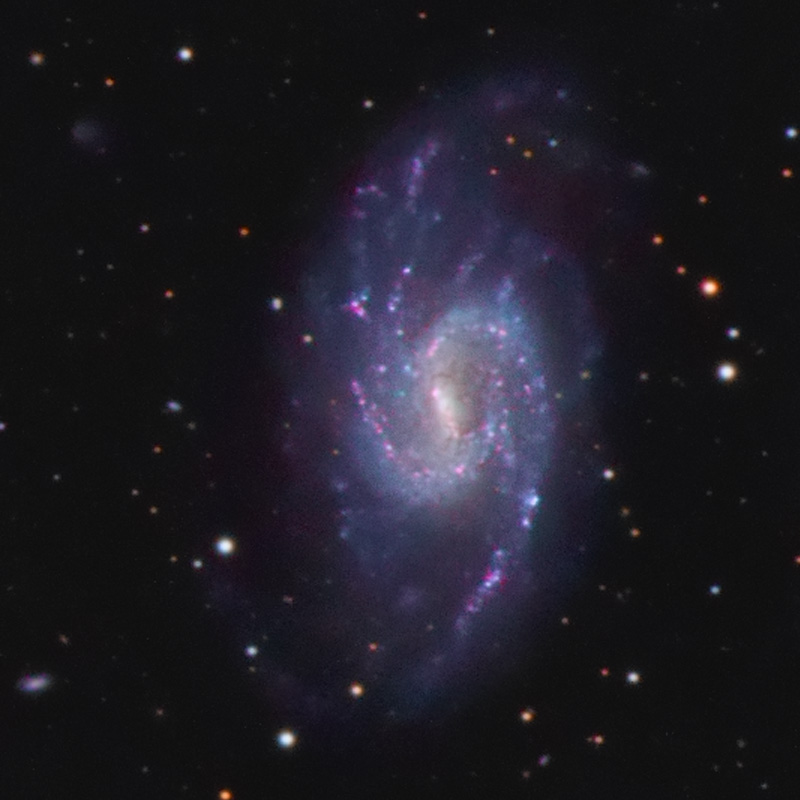