NGC 3433 Is a spiral galaxy about 140 million light-years away in Leo 2 degrees southeast of M96. At first glance or in short exposures it appears as a quite normal 2 armed grand design spiral. But looking closer there are fainter outer arms that are odd arm segments. This one could have made Arp\'s split arm category. The main arm going under the south side of the galaxy suddenly ends and two segments begin. One is straight and angled up sharply compared to the path the main arm was taking. The other follows the normal curved path but goes wide as if being pulled from the galaxy and extends much further than any other arm segment. Odd as there\'s nothing in the field that could have caused this. NED classes it as SA(s)C while the NGC project says Sc I. It was discovered by William Herschel on March 11, 1784. It\'s not in either H400 program.

There\'s one other NGC galaxy in the image. It is NGC 3444 toward the left edge. It is an Sbc spiral about 440 million light-years away. It was discovered by Albert Marth on March 25, 1865.

The first pair consists of WHL J105239.2+101148 which consists of 15 members with no size given at a distance of about 2.7 billion light-years. The anchor galaxy is shown with a slightly different distance but when rounded to 2 significant digits they appear the same. Thus I show it with 2.7 listed twice. North of it, forming the pair, is ZwCl 1050.0+1030 which gives a size of 17 minutes with 97 members but no distance. It is labeled as being \"compact.\" It would include over half my frame.

The other pair also consists of a larger Zwicky cluster that encompasses a smaller cluster. In this case, the small cluster is GMBCG J163.14180+10.07057 to the south of the previous pair. It is listed as having 11 members at a distance of 2.6 billion light-years. Almost the distance of the other non-Zwicky cluster. It is said to have 11 members. Again no size is provided. In this case, the redshift for the BCG is exactly the same as that of the cluster. This cluster appears to be part of ZwCl 1049.8+1017 with 66 members in a 10 minute diameter area. Again no distance is given.

There are 6 asteroids in the image. The brightest is (13220) Kashiwagura at magnitude 17.3. The naming citation reads: \"Mitsuru Kashiwagura (b. 1950), a high school teacher in Ooe, Yamagata Prefecture, has been observing occultations since 1994.\" It was discovered by T. Okuni on July 1, 1997.

As usual, labels on the annotated image are to the right of the object unless a line indicates otherwise. Distances are all in billions of light-years. 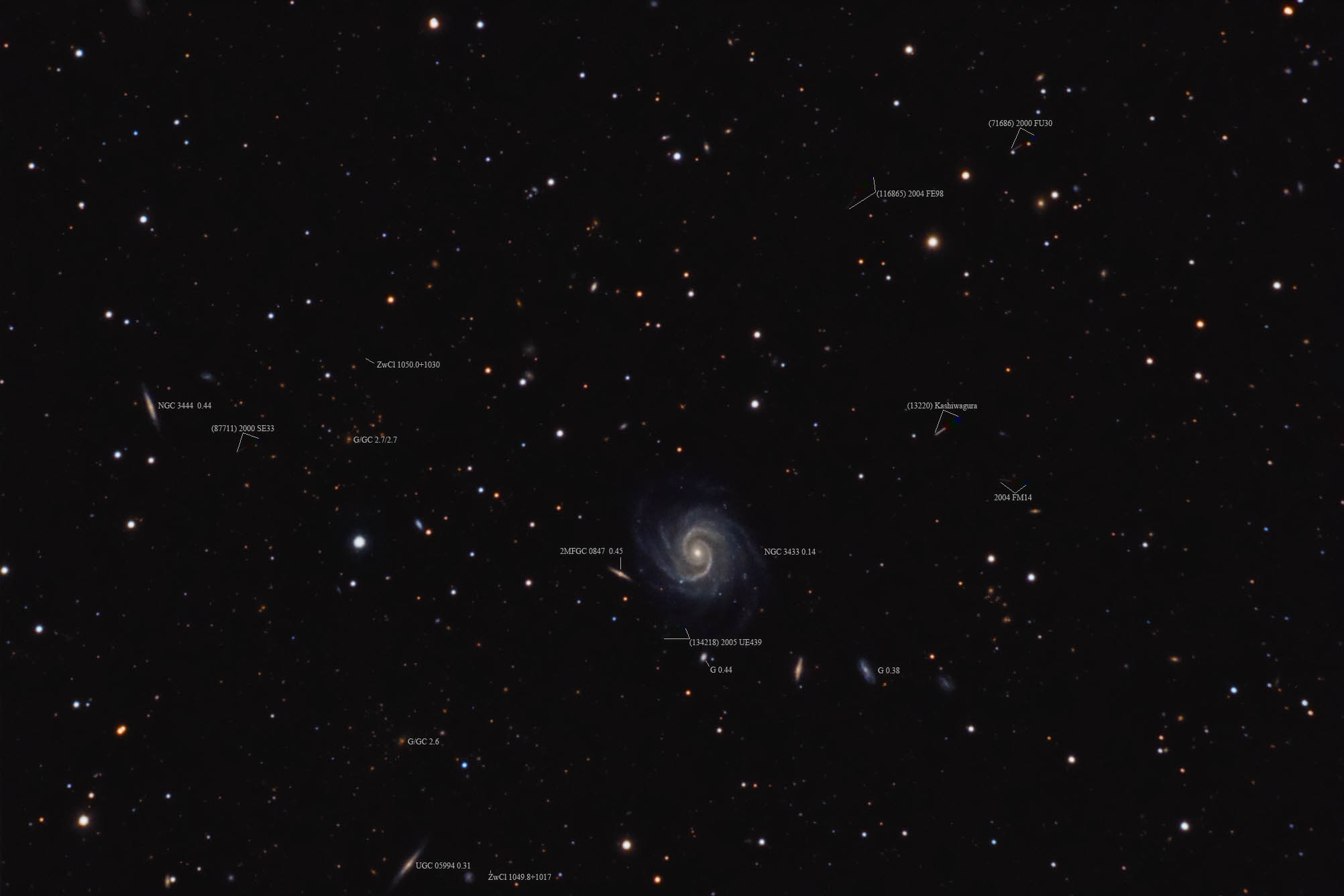 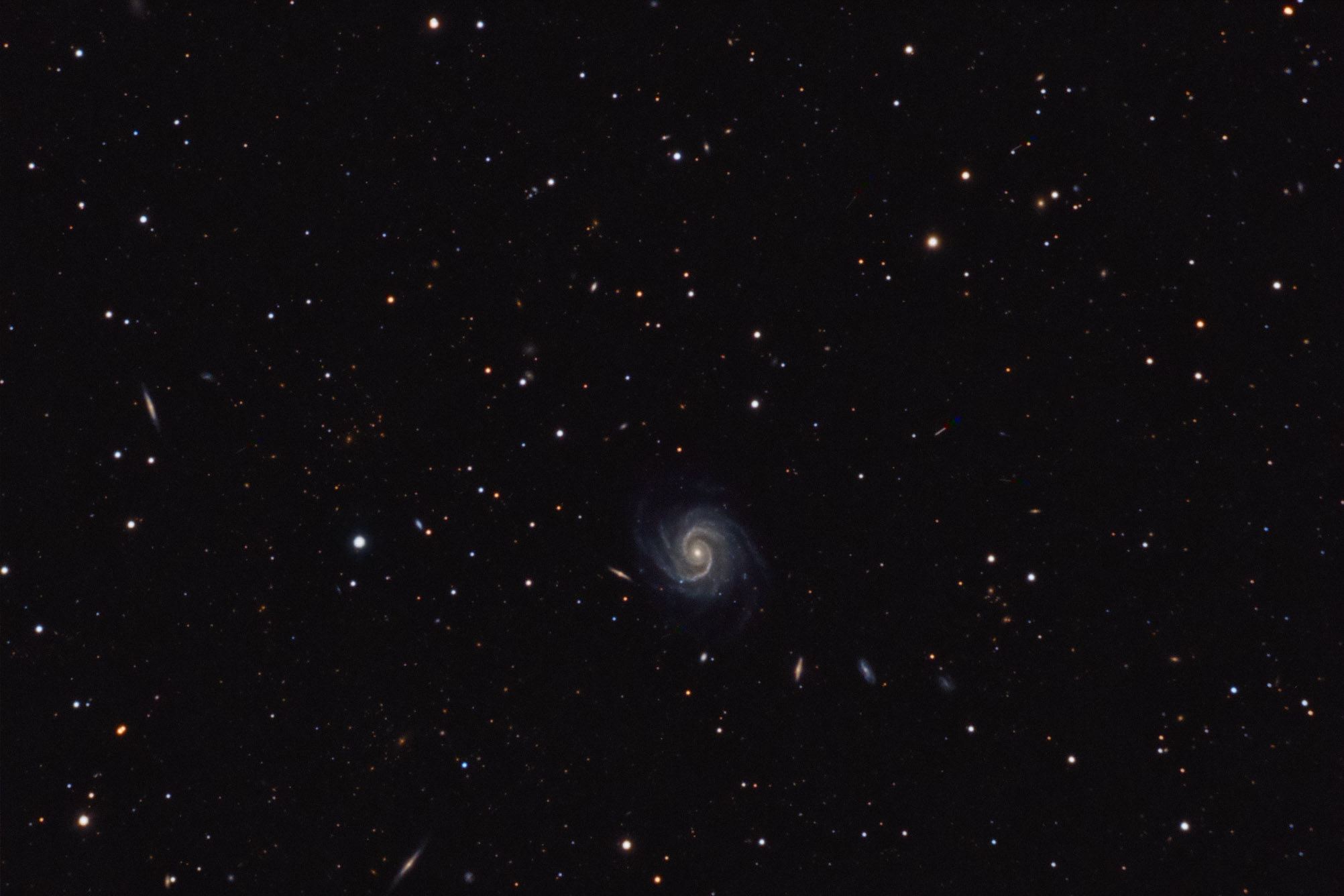 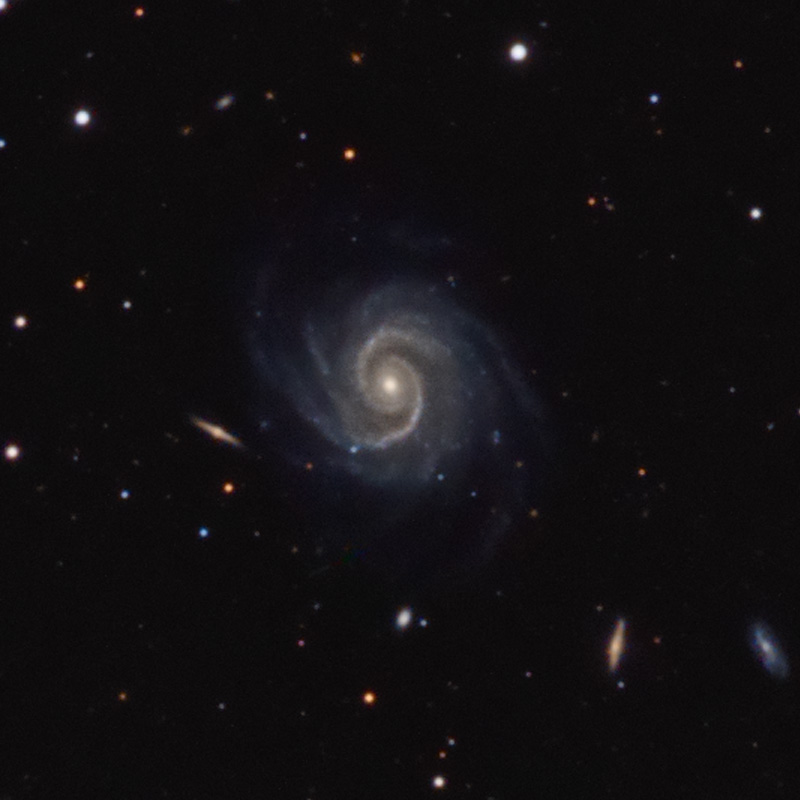