NGC 3521 is a very disturbed flocculent spiral galaxy in Leo about 35 million light-years distant. Redshift can be rather misleading giving a distance of 54 million light-years. NED gives it a classification of SAB(rs)bc;HII LINER while the NGC Project just notes it as Sb with H II emission. I didn\'t pick up any H II emission in my image. Deep images show a lot more to this galaxy than I was able to pick up. I took about 6 times the data used here, nearly all the color data was unusable as was 18 of the 22 luminance frames. The last 12 months have been by far the worst for imaging since I moved here 7 years ago. Actually, all color was unusable by normal standards. I just used the best single frame of each color as using more just made things worse no matter what I did. While I blame weather it was only half guilty. The other half of frames lost were due to a very bright aurora going on two of those nights that fogged the luminance frames and made the color balance awful. No amount of normalization could handle the frame differences which ranged from 450 (120 is normal) background to over 31,000 thanks to that aurora I slept through. If conditions ever improve I\'ll try again.

Most sources attribute all the plumes due to the remains of several dwarf galaxies it has consumed. One dwarf MGC 0016030 (near the western edge of my frame) has the same redshift so is likely a companion that has survived (so far). Because of my very weak color data, these plumes are in mono only as the clouds and aurora drown out any hope of color data for these faint features. Due to better than average seeing on the 4 luminance frames, I did use I was able to pull out a lot of detail right to the core of the galaxy. Much of the detail is \"fogged\" by all the scattered stars in its halo from galaxies it has consumed. Only a narrow region on the west (right) side is mostly clear of this \"fog\". This is why the contrast suddenly improves in a small area. Really makes it look strange. My processing cut through this \"fog\" to bring out as much of the flocculant nature as I could. If I could have used all 22 frames then I\'d likely have processed for the plumes instead. It was discovered by William Herschel on February 22, 1784. It is in the original H400 program. My log entry from April 16, 1985 on a fair but humid night at up to 150x with my 10\" f/5 reads: \"Large, tilted spiral with a brilliant starlike nucleus. Some hints of detail the outer arms. A good galaxy.\" But I can\'t find that I ever looked at it again.

CGCG 141-072 is oddly classed as a dwarf irregular galaxy. Looks like a barred spiral to me that has nice plumes coming off both arms. At over 10 times the distance of NGC 3521, it is small but not dwarf size. To its north is LEDA 135771. It too is classed as a dwarf irregular. This time it makes perfect sense. It is at the right distance and size to be a dwarf companion of NGC 3521. Is it next to be consumed?

MGC 0015934 is classed as Sc. I don\'t have sufficient resolution at a half billion light years to say if that is reasonable. Looks tighter than that but this may be due to my resolution.

2dFGRS N368Z219 to the southeast is one strange galaxy. It has a very blue bright core with faint, somewhat spiral plumes or arms. Again, my color data missed these plumes. The Sloan image shows these as the same blue color as the core. NED makes no attempt to classify it nor any other galaxy in the image.

Arp liked to find significance in quasars near disturbed galaxies thinking they were nearby objects ejected by these galaxies. A theory he never could support to the satisfaction of the astronomy community but he never gave up. I can\'t find that he used this one in support of his ideas even though it has far more quasars than average and is highly disturbed.

Near the lower left corner is the rather common galaxy 2dFGRS N368Z212. I\'d not mention it but noticed its redshift distance by NED\'s 5 year WMAP calculation is 666 million light-years. Is it the home of \"The Beast\"? I was annotating this when a character made the news resigning from his job because his W2 carried the processing number of 666.

NED listed a ton of very faint galaxies with redshift data. I listed a couple down to 23rd magnitude but omitted about 100 of them as not worth the effort.

There are two very short asteroid trails that are noted in the annotated image. They are likely short because they are at the end of their retrograde motion and about to begin normal eastward motion across the sky after we have passed them. 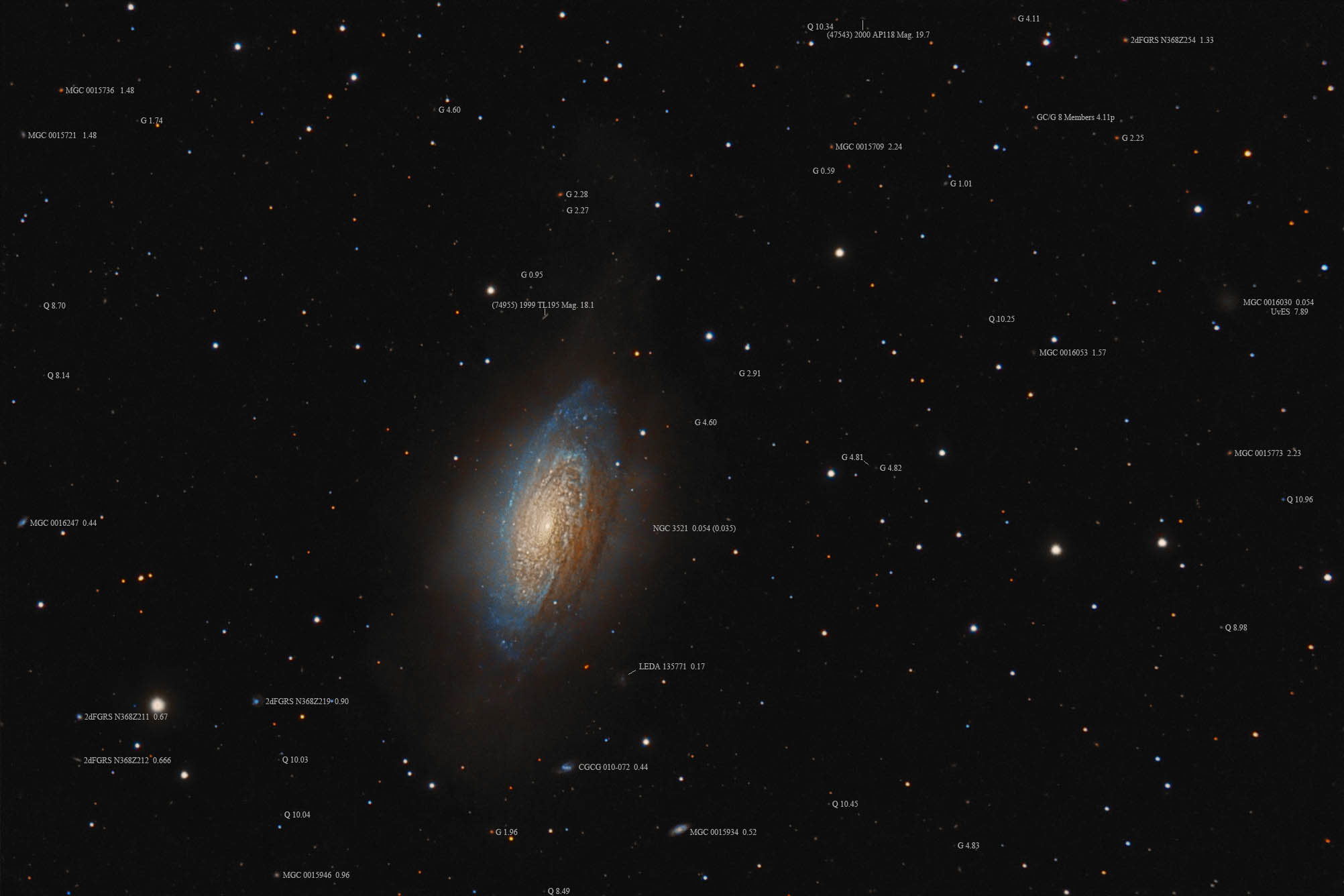 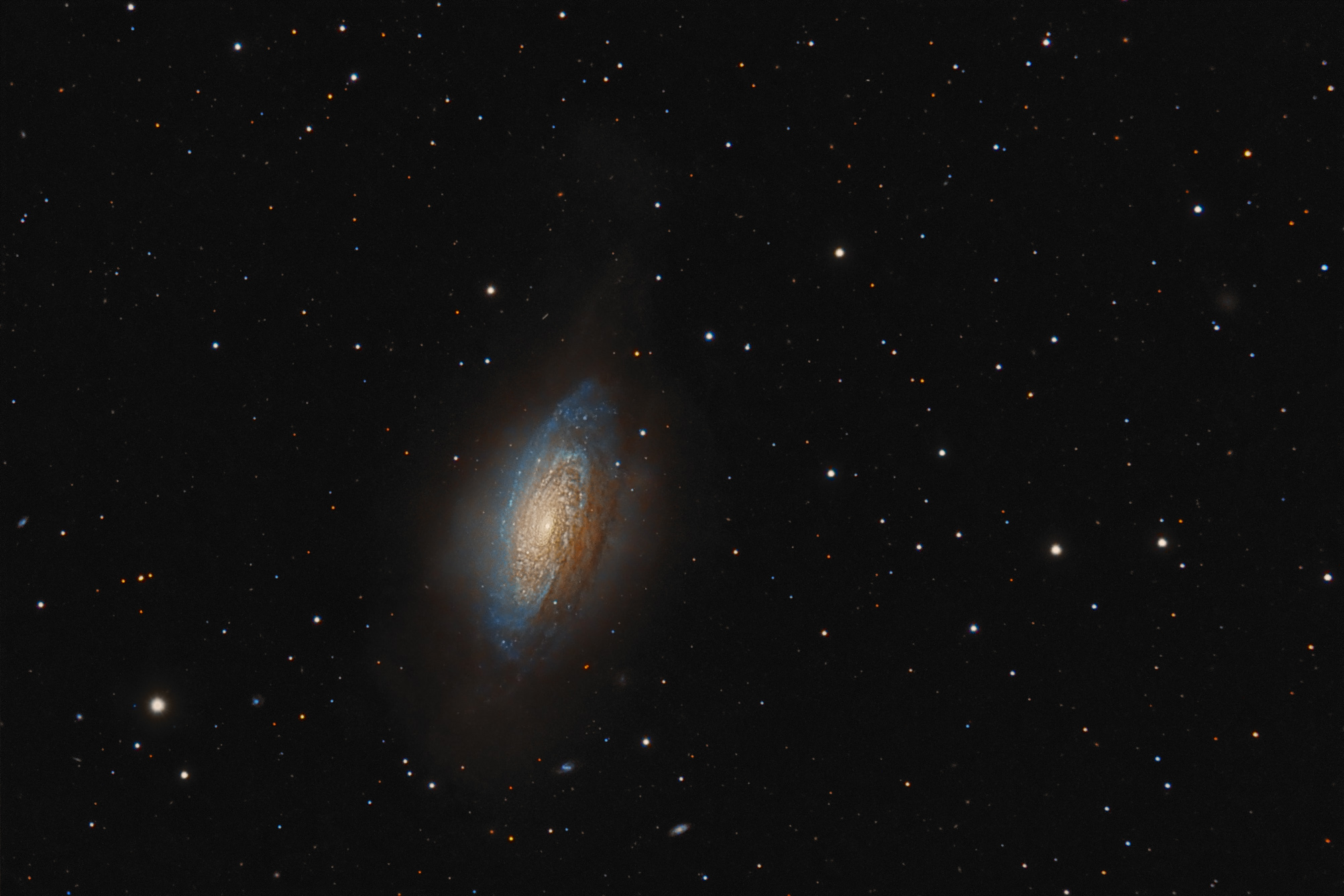