NGC 3646 is a very peculiar spiral galaxy in Leo. Its inner spiral structure is that of a normal flocculent spiral but the outer structure is chaotic at best. One note at NED reads: \"...The spiral pattern is very odd. One spiral arm emerges from the SE end of the inner disk and turns counterclockwise. Another emerges from the NW side of the inner disk and turns clockwise. These two arms appear to merge on the SW side of the galaxy, joining in a point. The arm structure on the west side is very well defined, and HSB, with many bright knots. On the east side, the arms are diffuse and patchy, with fewer knots. There is an LSB outer disk on the west side. The referee suggests, and we agree, that this may be an example of a galaxy with visible leading and trailing arms.\" I\'m not sure I see the bi-directional arms but two certainly meet at a point on the southwest side.

Another note has a somewhat different view: \"The morphology of NGC 3646 is peculiar, as if the result of an encounter. The outer spiral pattern cannot be traced even as to the sense of direction, but the inner spiral pattern is regular. NGC 3646 forms a physical pair with NGC 3649 (SBa; not in the RSA) at an angular separation of 8\'. The redshifts from the catalog of Karachentsev (1987) are v_o(3646) = 4227 km/s and v_o(3649) = 4322 km/s. At the mean redshift distance of 85 Mpc (H = 50), the projected linear separation is 200 kpc. However, there is no indication of morphological distortion in the spiral pattern of NGC 3649. The peculiar outer ring structure in NGC 3646 here cannot be attributed to interaction with NGC 3649.

\"The fact that the inner image of NGC 3646 has a normal morphology and is of normal size suggests that the ring is a result of a dynamical process such as the dropping of one galaxy through another, as postulated by Theys and Spiegel (1976, 1977) and by Lynds and Toomre (1976) in other ring galaxies. The abnormal velocity field and an early comment on the large linear diameter of the ring are given by Burbidge, Burbidge, and Prendergast (1961).\"

I think the idea it is the result of some sort of interaction is quite likely correct. I wonder if a merger is involved rather than a collision as I find no bullet in the area. Also, there are some odd plumes. One to the southwest is just visible toward the orange star. Others come off the northeast side and are more easily seen. Maybe someone who can put dozens of hours into this one can find traces of looping plumes that would pretty well cinch the merger idea or not find them thus giving more weight to a fast interaction being the cause. NGC 3646 was discovered by William Herschel on February 15, 1784. It is in the second H400 program.

NGC 3649, while called a companion has a somewhat different redshift and appears rather normal. As the notes say, it is not interacting with NGC 3646 nor does it appear to have done so in the past. Redshift puts it at 240 million light-years while NGC 3646 has a redshift distance of 210 million light-years. Tully-Fisher distance estimates place it 174 to 203 million light-years away with the more modern measurements favoring the shorter distance. The pair are located in Leo. NED classes NGC 3646 as SA:(r)bc pec (ring). The NGC Project uses the simpler classification of Sc I. Irregular or peculiar it certainly is different yet one Arp didn\'t include. It would have fit his miscellaneous category, I\'d think. NGC 3649 is classed SB(s)a by NED and S0 by the NGC project. I can\'t rationalize S0 for this obvious spiral galaxy. It has two sets of arms much like NGC 3646. One set tight to the core and outer arms that form a ring structure about it giving it a Saturn-like appearance. NGC 3649 was discovered by William Herschel the same February night as NGC 3646. It isn\'t in either H400 program.

The galaxy cluster at the top of my image, left of center has oddly differing redshift data for the cluster and the BCG anchoring it. Both are labeled as photographic which isn\'t as accurate as spectroscopic measurements. This may account for the difference. The cluster is WHL J112213.1+201752. NED shows it as containing 14 galaxies but gives no diameter. Toward the eastern side near the middle is another cluster with a different redshift (again both photographic) for the anchor galaxy. Though in this case the difference is small and not seen in the two significant digits I use for annotated images. That cluster is WHL J112242.1+200748 and has only 4 members in an undefined area.

While NED lists thousands of galaxies in my image except for these two cluster anchoring galaxies as well as the two NGC galaxies, none have redshift data. Hardly made the annotated image worth it. But I started it before discovering the lack of data. I\'m including it anyway. 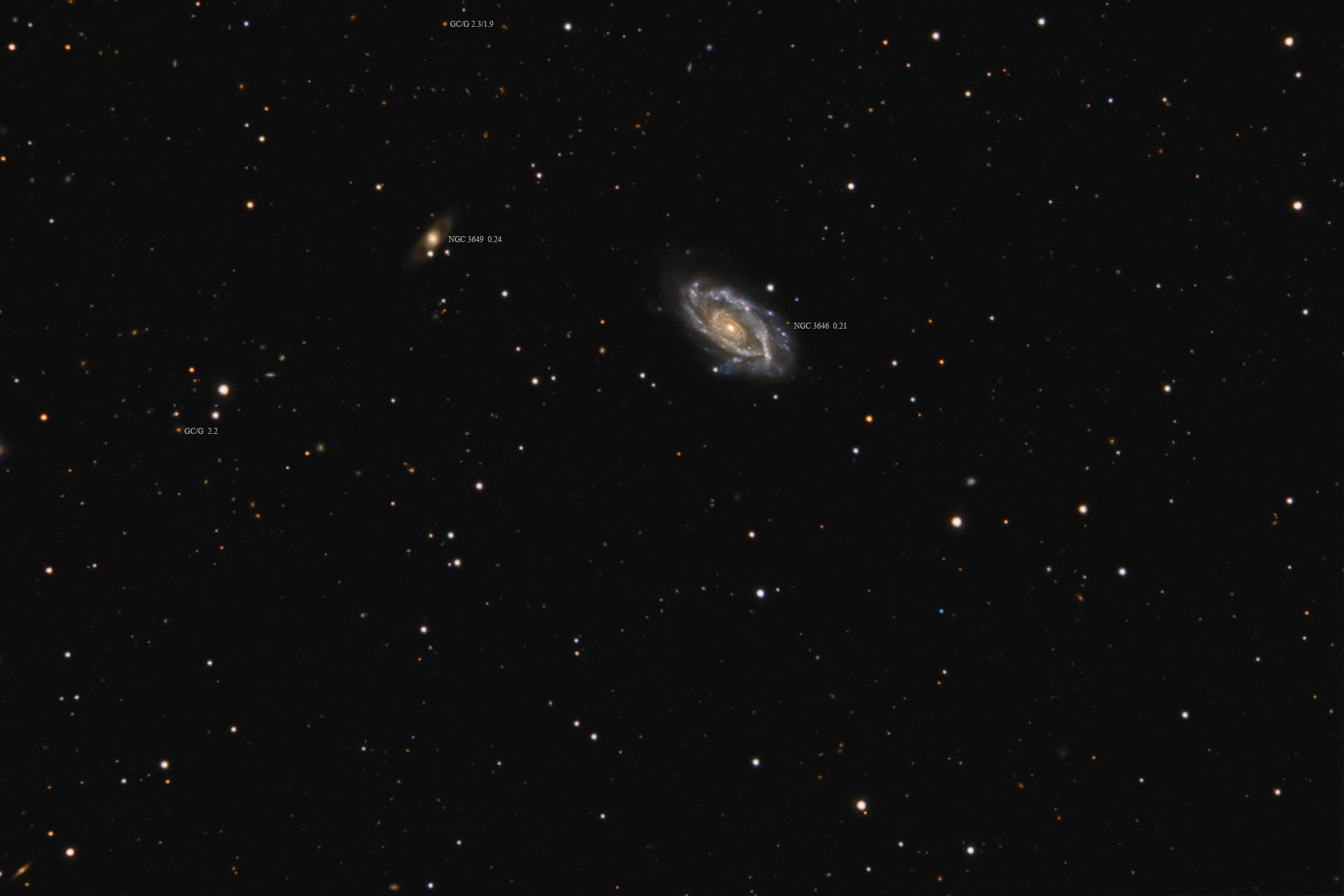 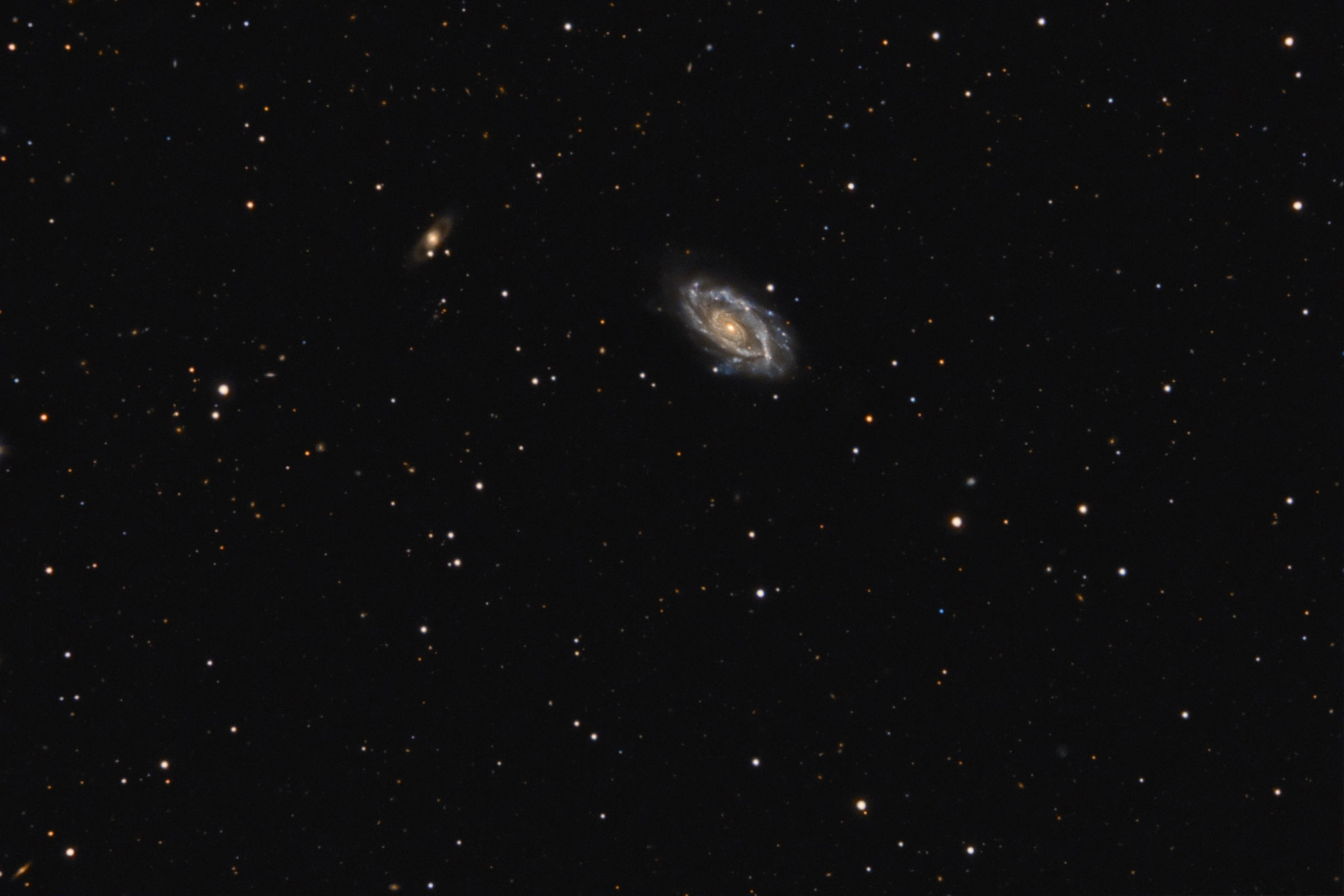 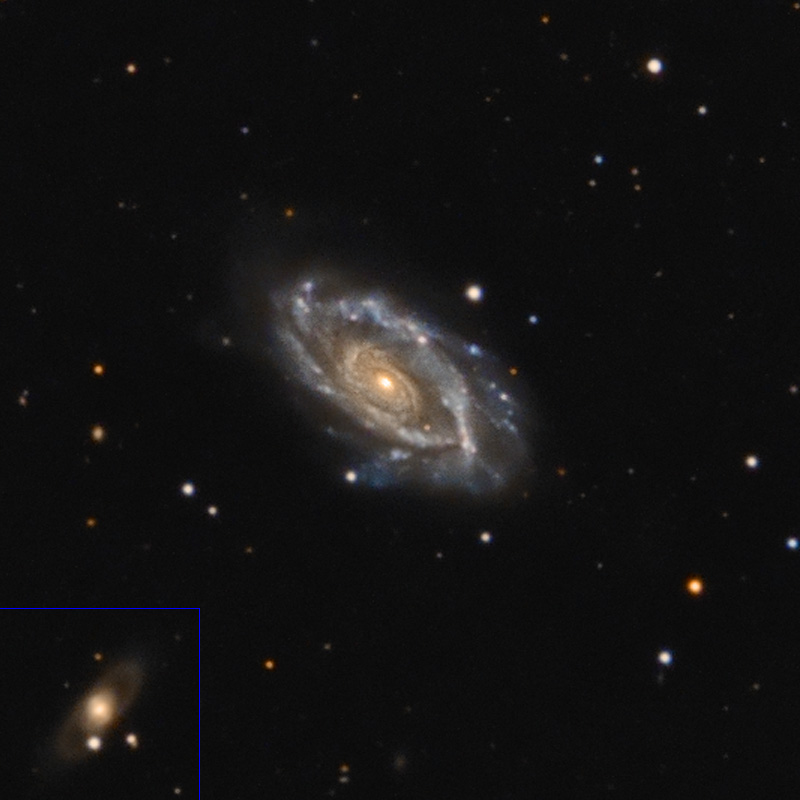