When I imaged the USGC S171 galaxy group last April I had no idea what a can of worms I was opening. I looked up the group on a POSS server nothing odd was seen. When I brought it up in The Sky I decided to center on NGC 3724 so entered those coordinates. The scope dutifully imaged exactly what I expected. I processed the image and seeing it was in a little studied area had only a few galaxies to annotate. When I started in on that all hell broke loose. When I checked the NGC project for details on NGC 3724 it showed me an entirely different galaxy yet referred to NGC 3732 at the very bottom of my image. But nothing else made any sense at all. At least they gave an IC number for it as well (IC 2910). That took me to a galaxy almost 40 minutes beyond this field to the west. Now I was totally confused. Looking up NGC 3724 at NED showed the field and galaxy I\'d taken but noted that NGC 3724\'s identity was uncertain. Oddly NED had no such \"essential note\" for NGC 3722 even though the NGC project again pointed to an entirely different galaxy two thirds of a degree west well out of my field of view. Then checking NGC 3730 I found it too was of uncertain identity yet both sources pointed to the same galaxy in this case. By this time I was breaking out the Jack Daniels and it was only mid-afternoon. For a lot more on this confusion see the entry for NGC 3724 at the NGC Project and their reasoning as to why they picked these other galaxies. Since I use NED as my standard source unless I have a strong reason otherwise I\'ll go with their identifications on the annotated image. But then I checked SIMBAD and found yet a different ID for these. What NED has for 3724 SIMBAD says is 3722 and vise versa. NGC 3730 at NED and NGC Project is NGC 3721 at SIMBAD. NED says 3721 is a galaxy just out of the top of my field while the NGC project puts it over near their version of NGC 3722 and 3724. Even a half dozen shots of Jack Daniels didn\'t help my aching brain. In any case, there\'s no uncertainty that this is the field for the center of USCG S171 whose center is marked on the annotated image.

Here\'s a table of the NGC galaxies at NED (N) then NGC Project (NP) then SIMBAD (S).

NGC project covers only objects it considers NGC galaxies or IC galaxies. I use na to indicate the object isn\'t considered either by the project thus not covered.
In all cases, The Sky agrees with NED. I was too dizzy to check other sources.

This confusing field can be found in north-central Crater and is about 300 million light-years distant. IC 2910, the other NGC 3724 lies at about the same distance so is likely also part of the group though NED lists no size for it. Also the other NGC 3722 (LEDA 170153 according to NED, SIMBAD and The Sky) is also about this distance. This field is on my to-do list. Though at the time only because this other NGC 3724 is a nice peculiar galaxy. I had no idea of this can of worms when I put it on the list. The other NGC 3722 is nearby so will be in the field though I\'d not thought about it when putting this area on the to-do list.

NGC 3722 and NGC 3724 in my image were discovered by Andrew Common in 1880 according to Corwin and Seligman yet when I look up NGC discoveries by Common neither is listed.

This leaves only one other NGC galaxy and this one has no issues except I didn\'t get it all in the frame. That is NGC 3732 rather ill-defined spiral or S0 galaxy that is much closer at about 88 million light-years. It was discovered by William Herschel who didn\'t mess up coordinates when he logged it on March 4, 1786. It is in the Herschel II 400 list. Since that wasn\'t the target my system chose it didn\'t bother to make sure it was in the frame even though it too was on the to-do list. I suppose I need to rewrite my script to check for such things in the future.

Six asteroids are visible in the luminance FITs stack. A couple are very faint and might not make it in the highly compressed annotated image. Transparency was poor this night so even the brightest which would normally be nearly saturated is rather faint though its color traces can be seen.

Due to the conditions and how low this one is in my sky the color data is highly suspect. All attempts at normal color balance techniques (G2V, eXcalibrator) failed miserably turning in a highly red image. So I applied more a seat of the pants color balance. The result is highly suspect but the best I can come up with under the conditions. I couldn\'t find any color images of this area except pseudo color from red and blue POSS plates so I had to pretty much wing it. Basically, I used the brightest asteroid and equalized the three color traces. Probably wrong as I don\'t know the color of the asteroid. Many are red. In which case this one is red starved. 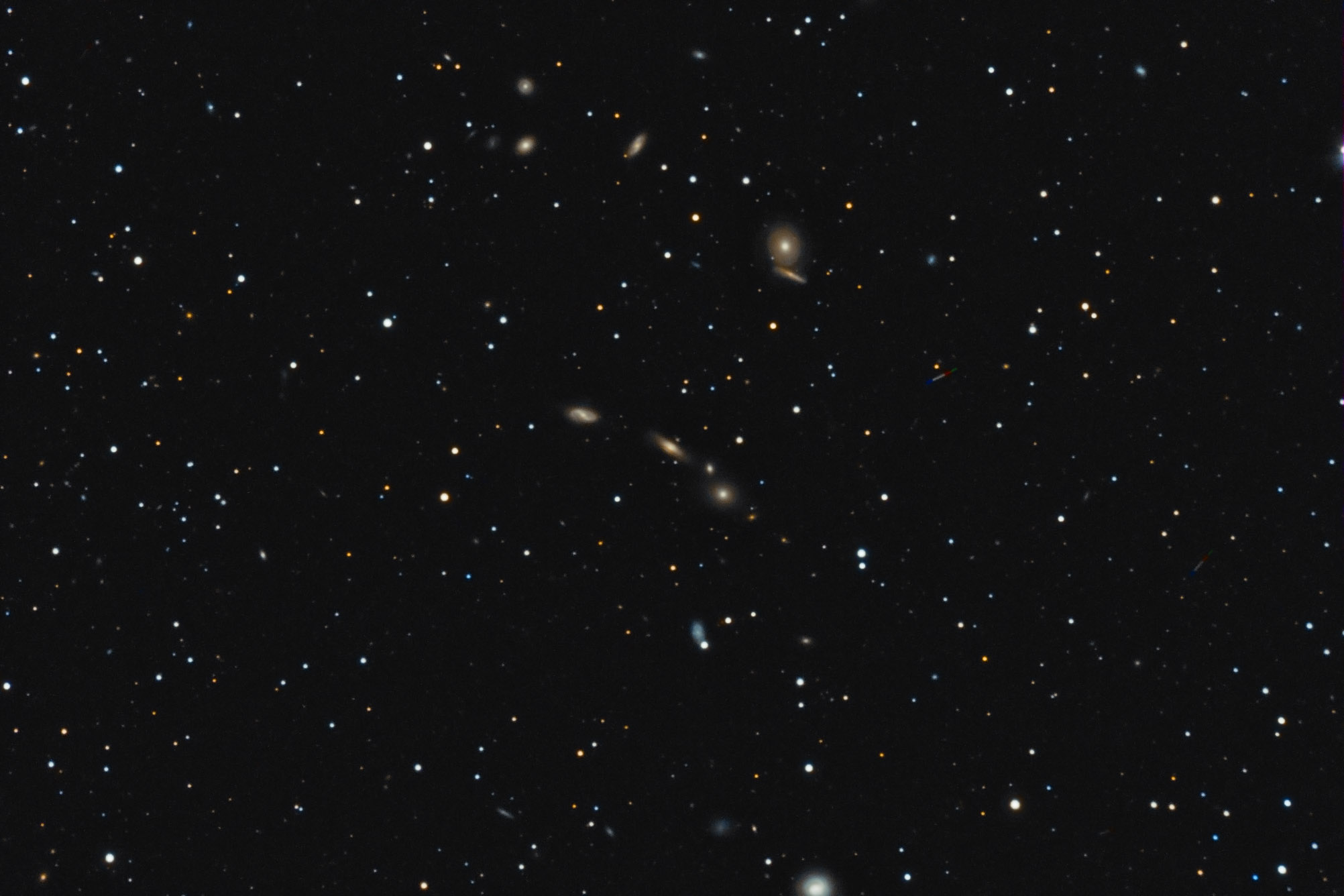 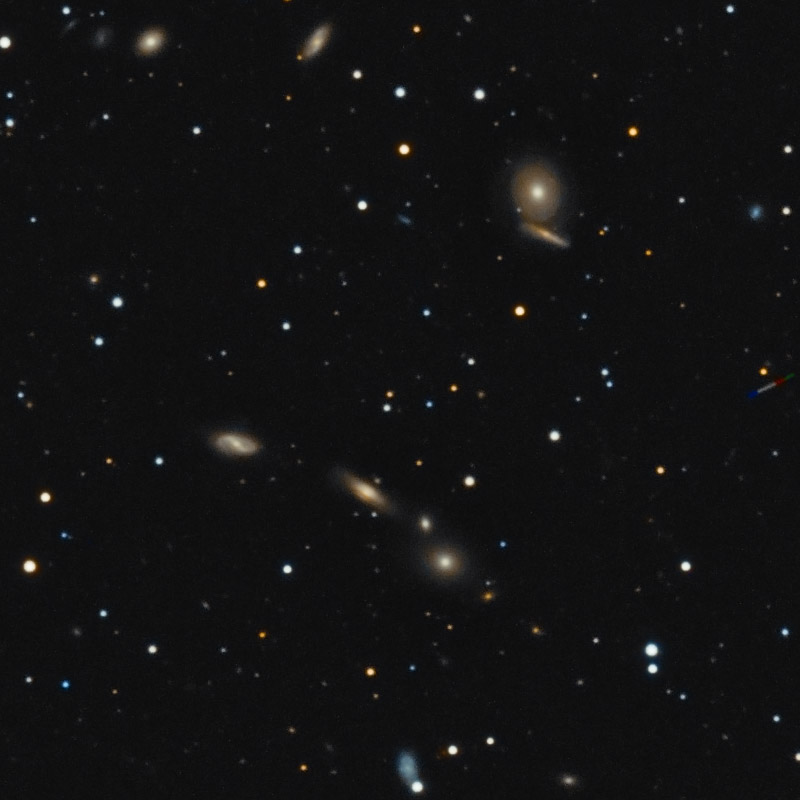 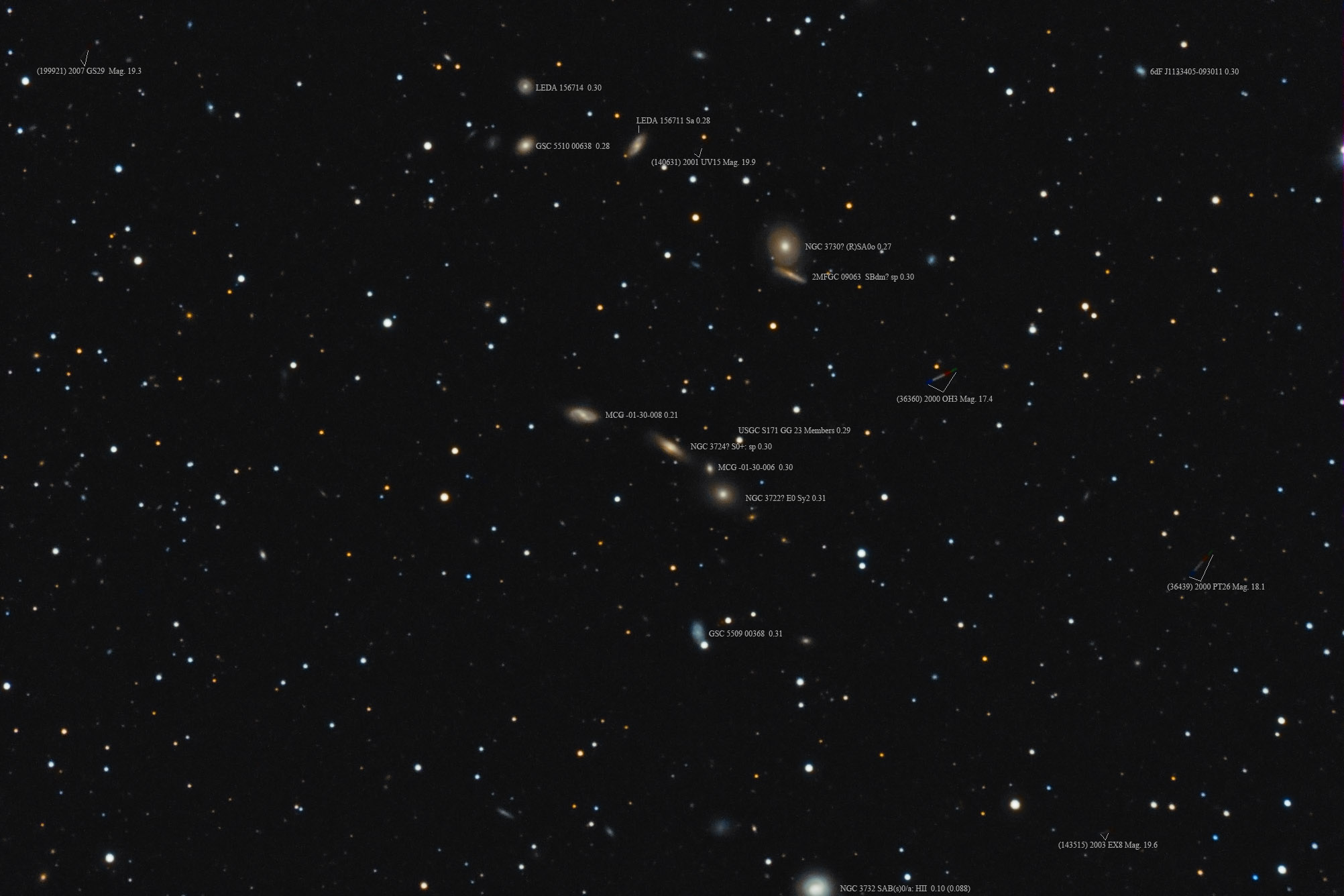