NGC 3780 is a many armed spiral often considered by some as similar to M 101. Like M 101 it is in Ursa Major but is in the bowl of the dipper rather than above its handle. It is about 110 million light-years distant by redshift and 150 million by the median of 5 Tully Fisher measurements. Assuming the 110 million light-year distance it is much smaller at about 90,000 light-years across (120,000 if the larger distance is correct). While it is said to have HII regions all are under 1\" of arc in size so I didn\'t pick them up. Like M 101 it is highly unsymmetrical in its shape and spiral structure. NED listed a couple of its knots as separate galaxies, I didn\'t annotate them even though NED didn\'t consider them parts of the galaxy. Their redshift was the same indicating they are just star clouds in the galaxy. The galaxy was discovered in 1789 by William Herschel but isn\'t in either of the two Herschel 400 lists which I find is an odd omission.

To the southeast is NGC 3794 which is also NGC 3804. In fact 3804 is the more correct number. It was discovered twice by William Herschel in 1789 but his position for NGC 3794 was off by 30\" of time leading him to not catch his mistake though his descriptions of the two match. This one, being fainter than 3780 also failed to make either Herschel 400 list. In this case NED also points to a bright blob in the galaxy as being a different galaxy. But the redshift puts it 5 times further away so it likely is a separate galaxy. I\'ve noted it in the annotated image.

The third major galaxy in the image is UGC 06596, a rather large irregular galaxy at about the same redshift as NGC 3780 so the two are likely related. It is about 45,000 light-years across making it 3 times larger than the large Magellanic Cloud. Their projected separation is about 475,000 light-years putting it 3 time further away than the large cloud is from our galaxy. I consider it unlikely it is a satellite of NGC 3780 given these figures. It too has a star cloud in it that NED lists as a separate galaxy but this one has the same redshift as UGC 06596. Thus it appears to be just a bright star cloud in the galaxy rather than a separate galaxy. I suppose it is possible that it is something being digested but I rather doubt that. I find nothing on it in the literature to help.

Two galaxy clusters are seen above NGC 3780. I\'d have considered this to be one rather than two but apparently two different redshifts are involved. I point the the Bright Cluster Galaxy likely anchoring each cluster. The redshifts of both clusters is photographic so can be a bit iffy. The BCG of the closer cluster however has a spectroscopic redshift putting it, and thus the cluster closer than the photographic redshift would indicate and making more likely these really are two different clusters. I wish there was redshift data for the blue galaxy below the BCG of the more distant cluster. Apparently it is not related to either cluster.

Objects with designations other than those that are just its coordinates are listed by catalog name. Otherwise just by the notation of G for galaxy, GC for galaxy cluster, GG for galaxy group and Q for quasar. 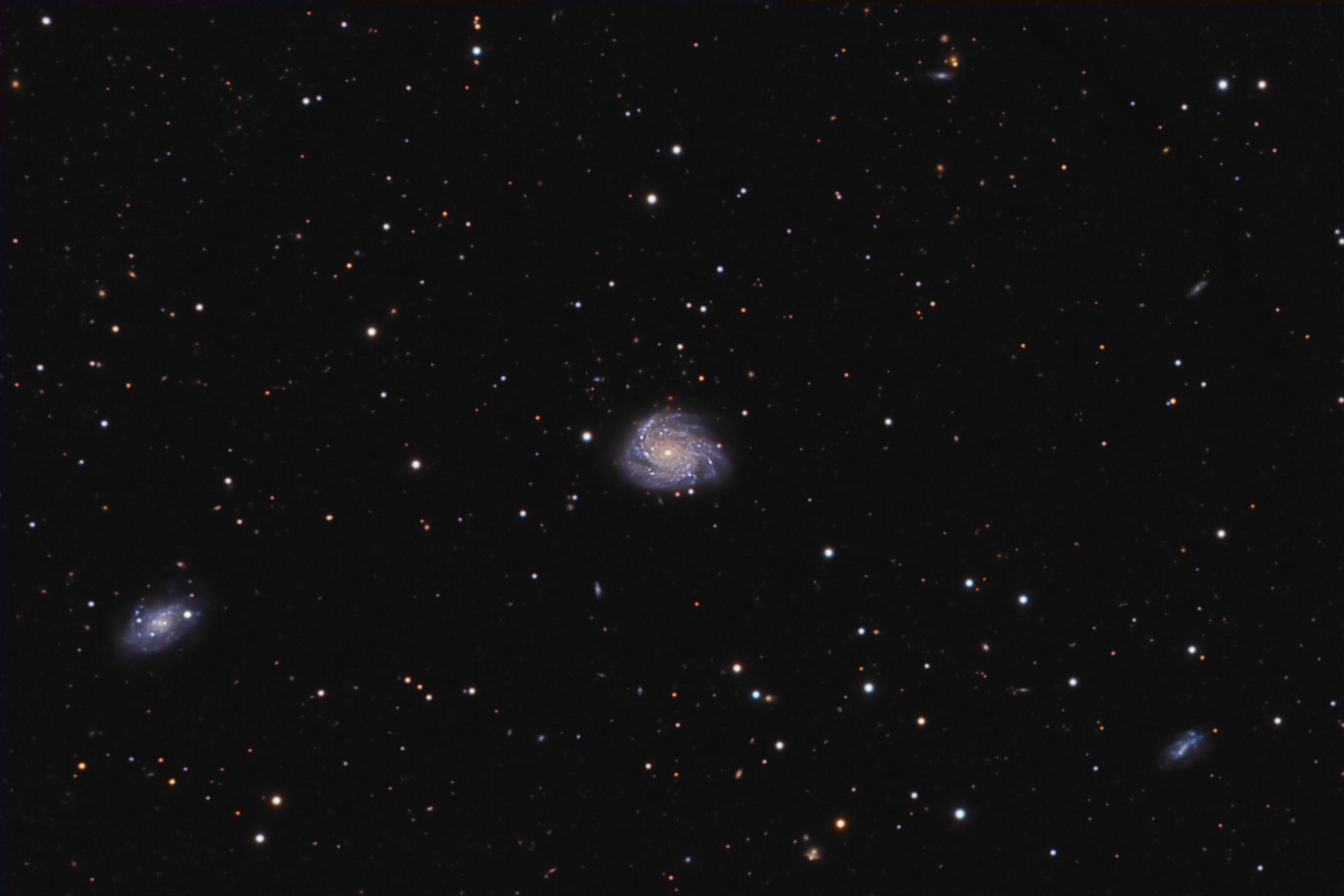 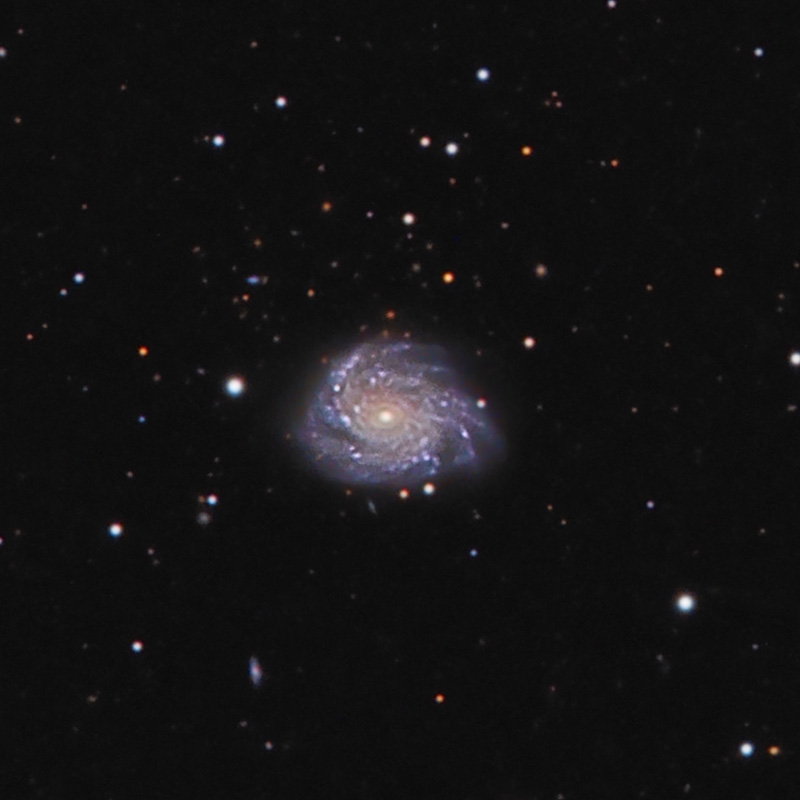 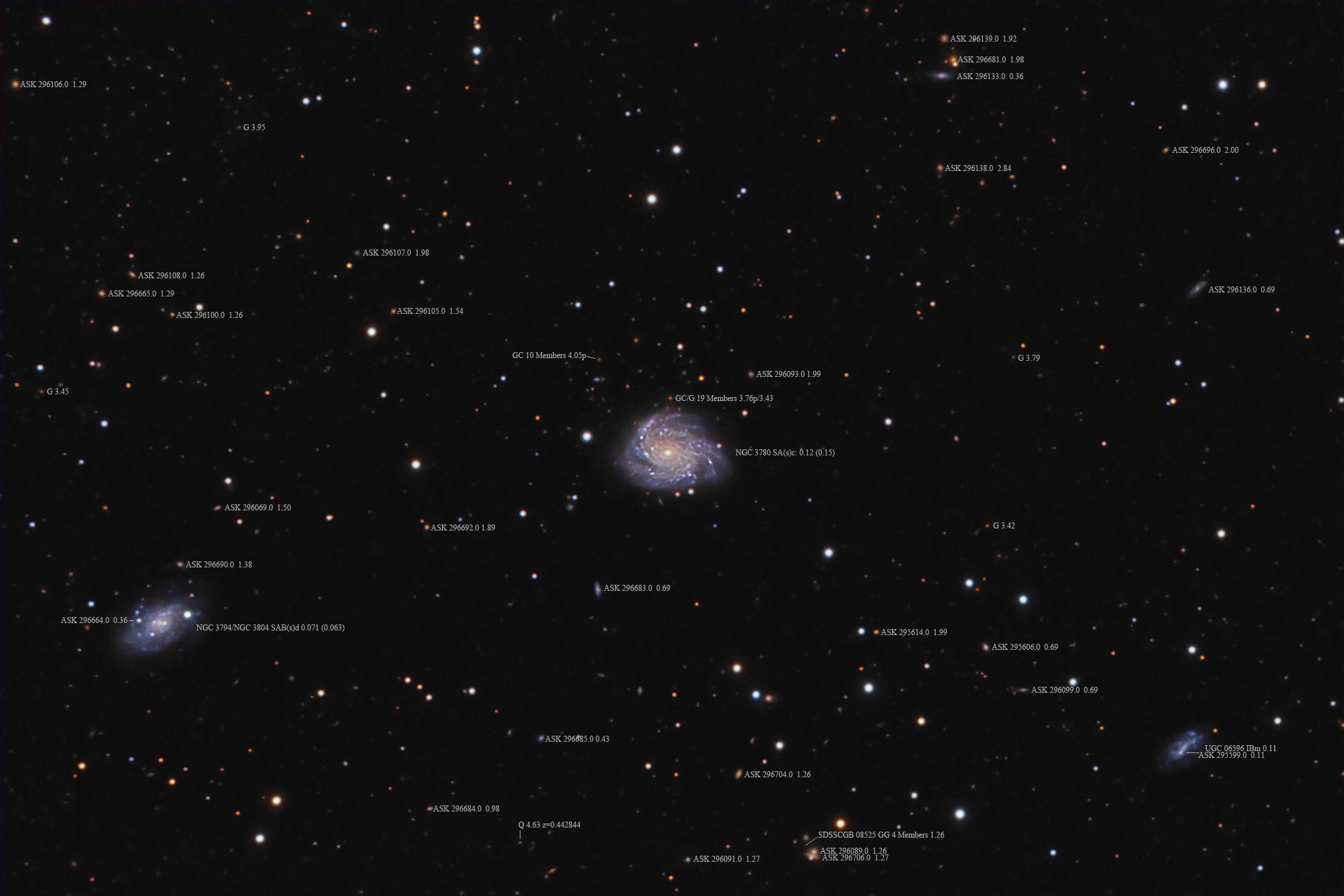