NGC 3810 is a beautiful near face on spiral that for some reason virtually no one seems to image. It is located in eastern Leo and may be part of the Virgo Galaxy cluster. I find various distance estimates. Redshift says 62 million light-years while the median value at NED of non-redshift measurements says 59 million. That is a good agreement. Then the HST web page on their image of the galaxy says 50 million light-years. The HST image and text can be found at: http://www.spacetelescope.org/images/potw1006a/ . Note that this image was taken with blue-green and infrared filters so misses H alpha light and is not a natural color image though not too distorted other than missing H alpha totally. It is oriented with north to the left. My image has north at the top.

It was discovered by William Herschel on March 15, 1784 and was put into the first Herschel 400 list published by the Astronomical League, one reason it went on my to-do list. Notes at NED indicate its HII regions are 1\" of arc or smaller so not seen by the authors. Thus I was taken aback when I processed this image and many HII regions popped out without my doing anything. Especially since the Sloan image I saw showed these areas as blue star clusters. I didn\'t use an H alpha filter nor push H alpha with Lab color techniques. The red was just there. In fact, I toned it down some as it looked too strong to me. The only other image I could find was one by Adam Block when he was at Kitt Peak but even that image showed them only weakly. I\'m at a loss to explain my results. Especially since conditions were fast going downhill and I saved red to last since it is least hurt when this happens. Maybe somehow the thick haze helped? You can see it even in the luminance images in the lone asteroid trail which dims in the middle due to the thick haze getting even thicker. Processing this one was \"interesting\" due to the bright haze the star on the left side of the image threw across the entire field. I almost canned this one and put it up for a reshoot next year upon seeing how poor the data was but gave it a shot which turned out far better than I expected.

The annotated image shows many galaxies about 1.05 billion light-years distant. They must be part of some cluster but I couldn\'t find what it might be. Could be it isn\'t cataloged. I\'m somewhat puzzled by a galaxy cluster and galaxy in the upper right corner. Both are listed at NED at the same coordinates though those of the cluster have a larger error circle the center of the circle matches the position of a galaxy. That\'s quite common as they use the bright cluster galaxy for the position when there is one. But this time the galaxy isn\'t listed as being the BCG and has a rather different redshift. That happens when the cluster\'s redshift is photographic and the galaxies spectroscopic. But in this case both are spectroscopic so I\'d expect close if not exact agreement. That wasn\'t the case. I don\'t know if the galaxy is unrelated and just happens to lie in the same line of sight as the cluster or if they are related and one of the redshift measurements is inaccurate (or both are).

There are three quasars in the image, two very blue. The third is the most distant but is listed as a quasar candidate. What else it could be at that redshift I don\'t know but it is listed a broad absorption line object and quasar candidate so I marked it with QC in the annotated image. It too is blue just not as strongly blue as the other two. 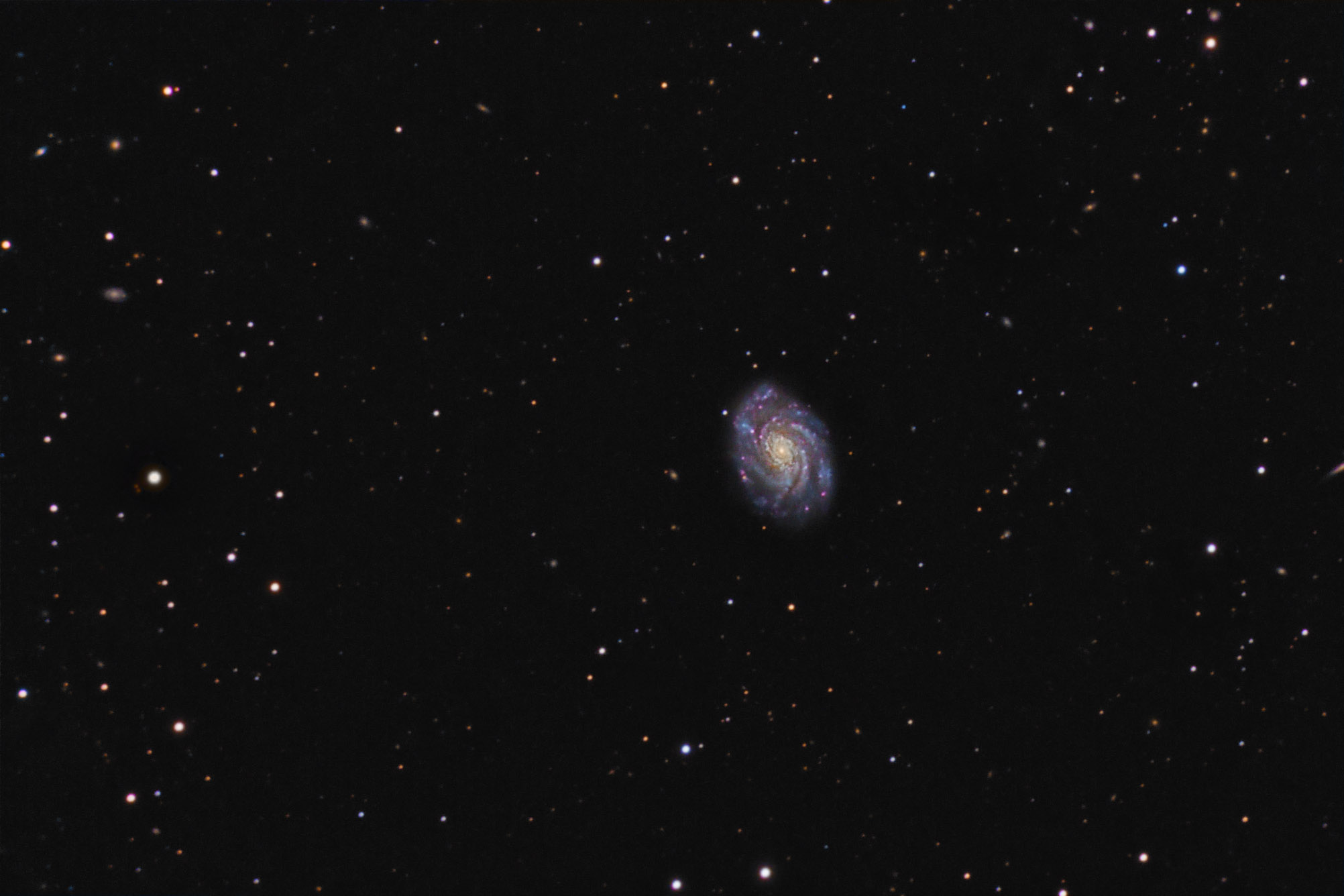 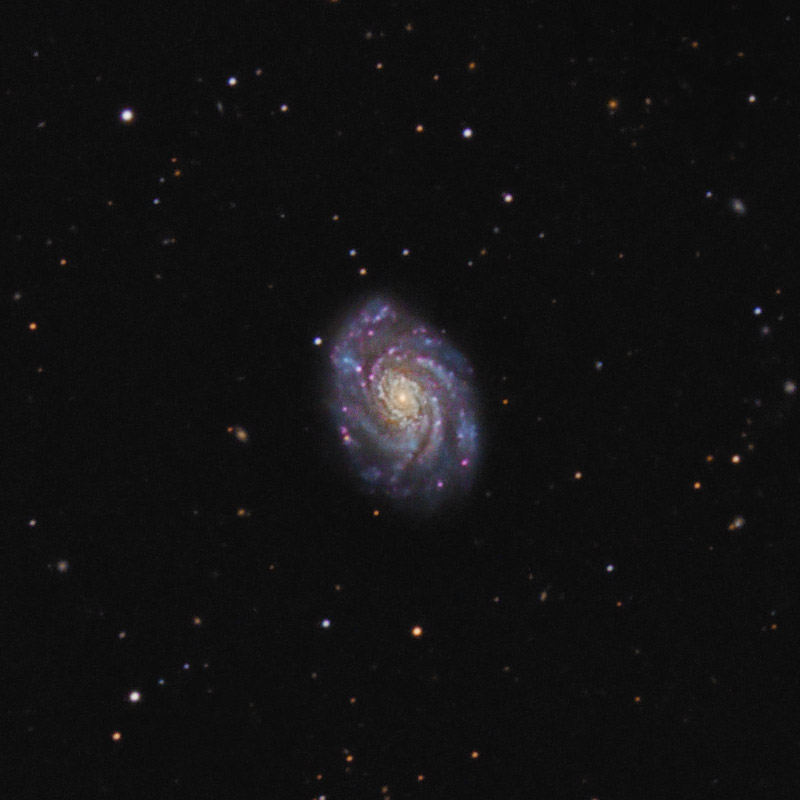 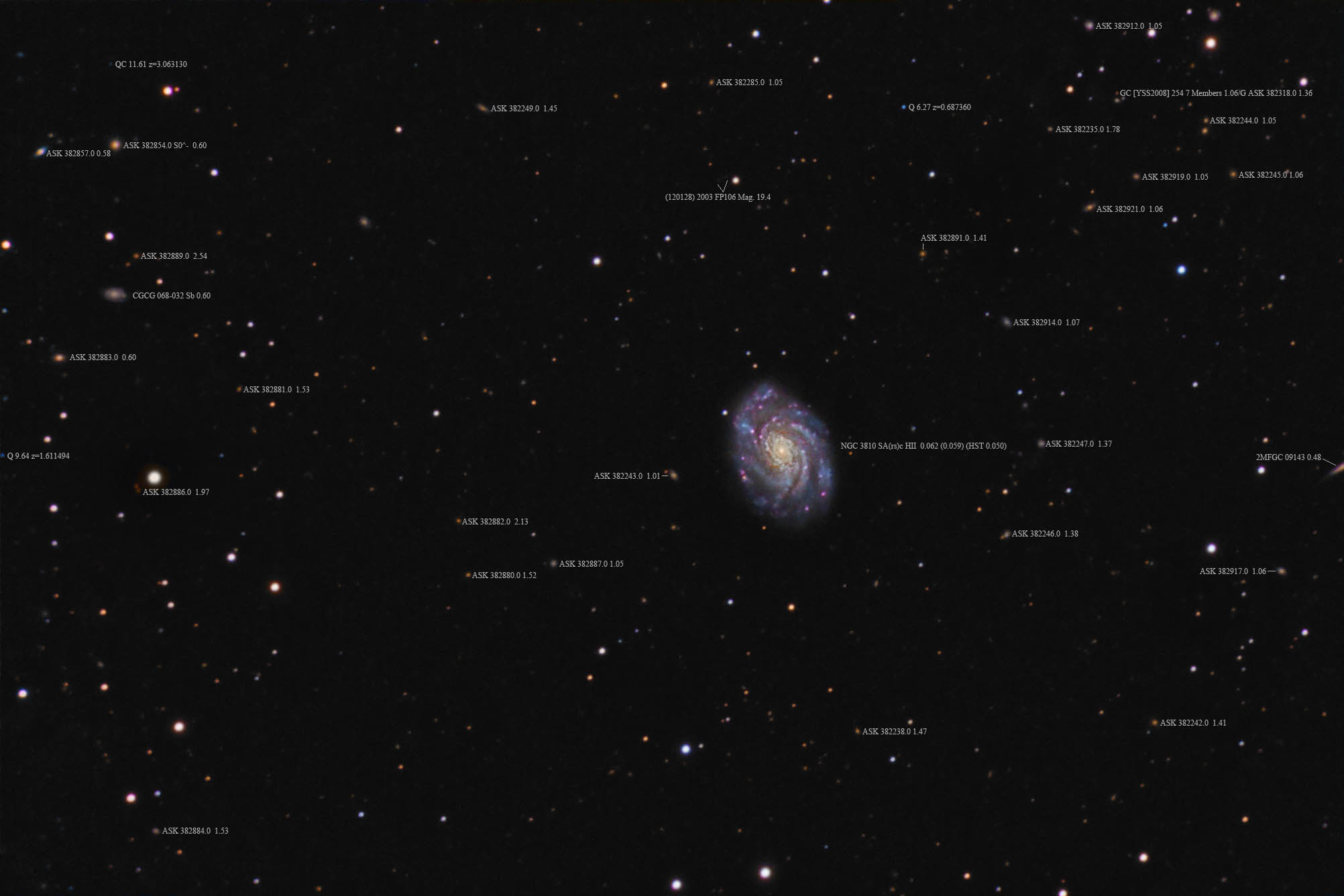