NGC 3898 is one of 4 galaxies in the NGC 3898 galaxy group. NGC 3888 on the far right of my image is also considered one of the 4 but its distance is nearly twice as great by redshift. NGC 3821 well out of the field to the right is a third member. I haven\'t been able to determine what the 4th member is. The only other galaxy in the image at the right distance is a faint, tiny dwarf galaxy, LEDA 2832082. It is only 7500 light-years across. I find no indication it\'s the 4th member. This field is in the bowl of the Big Dipper on the edge of the Abell 1377 galaxy cluster which lies over 10 times further away but does explain the many galaxies in the image in the 680 to 750 million light-year range.

NGC 3898 is a rather drab low contrast spiral. The arms are only slightly blue and barely stand out from the disk of the galaxy. The bright disk portion of the galaxy is about 60,000 light-years across but it has some very faint outer star clouds if you look really closely. Including these, it is some 144,000 light-years across. It would be a good target for those putting many hours into an image to pick up its full extent.

NGC 3888, while considered part of the 4 galaxy group is almost twice as distant by redshift at 120 million light-years. If correct I measure its size at 75,000 light-years with a hint it may be 80,000 light-years across in a deeper image than mine. Its spiral structure is easily seen compared to that of NGC 3898. There is a galaxy below its right edge. I found nothing on it. It is listed as a separate galaxy, SDSS J114728.03+555720.1 at NED. Could it be at about the same distance as NGC 3888 and thus have interacted with it or been a result of something interacting with NGC 3888? Also, NED shows what it calls a separate galaxy on the edge of an arm of NGC 3888. To me, it is no different than star clouds in the galaxy. Another NED lists as part of the galaxy. Why this one isn\'t also so listed I don\'t know. In any case, I\'ve included it in the annotated image.

Both of these galaxies were discovered by William Herschel on April 14, 1789. NGC 3898 was my target since it is one of the objects in the original Herschel 400 observing program. Somehow I entered the coordinates wrong on my to-do list so it moved it high. I\'d not noticed the other two NGC galaxies would be in the frame or I\'d have moved NGC 3898 east and a bit north. At least I caught them, just framed poorly. My log entry from April 16, 1985 on a fair but humid night with somewhat reduced transparency at 60 to 150 power reads: \"A small puff of a galaxy with a bright Nucleus. Seems more circular than the writer says. Forms a low power pair with NGC 3888. This galaxy is in Ursa Major rather than Leo as the guide says. That makes up for NGC 3655 that is in Leo but the guide says is in Ursa Major.\" Apparently, I was seeing only the center of NGC 3898 as I\'d not call it small. That may explain why I saw it more circular than it is. The humidity may have been hurting more than I realized. Also, I was more concerned with errors in the preliminary H400 list than saying much about the galaxy itself.

There\'s a third NGC galaxy in the image, NGC 3889. It appears to be a member of the Abell cluster. I didn\'t mention it so likely it was lost in the humid sky. While it looks much smaller than the other two, that\'s because of its distance. I measure it at 160,000 light-years in size. It was discovered by Lawrence Parsons on April 1, 1878. While the Lord often took credit for discoveries by his assistants this appears likely one of those he actually found. I need to borrow Sherman and Peabody\'s Wayback (or is it WAYBAC?) machine to verify this.

Being high in the north above the ecliptic it isn\'t surprising there were no asteroids in the image. Otherwise, it is a rather typical image for background objects. I do want to point out a pair of Alberio like galaxies on the far left of my frame, one orange and one blue. They even have similar redshift distance. NED lists the blue one as a rejected candidate quasar. I assume its blue color is involved with it being taken as a possible quasar. 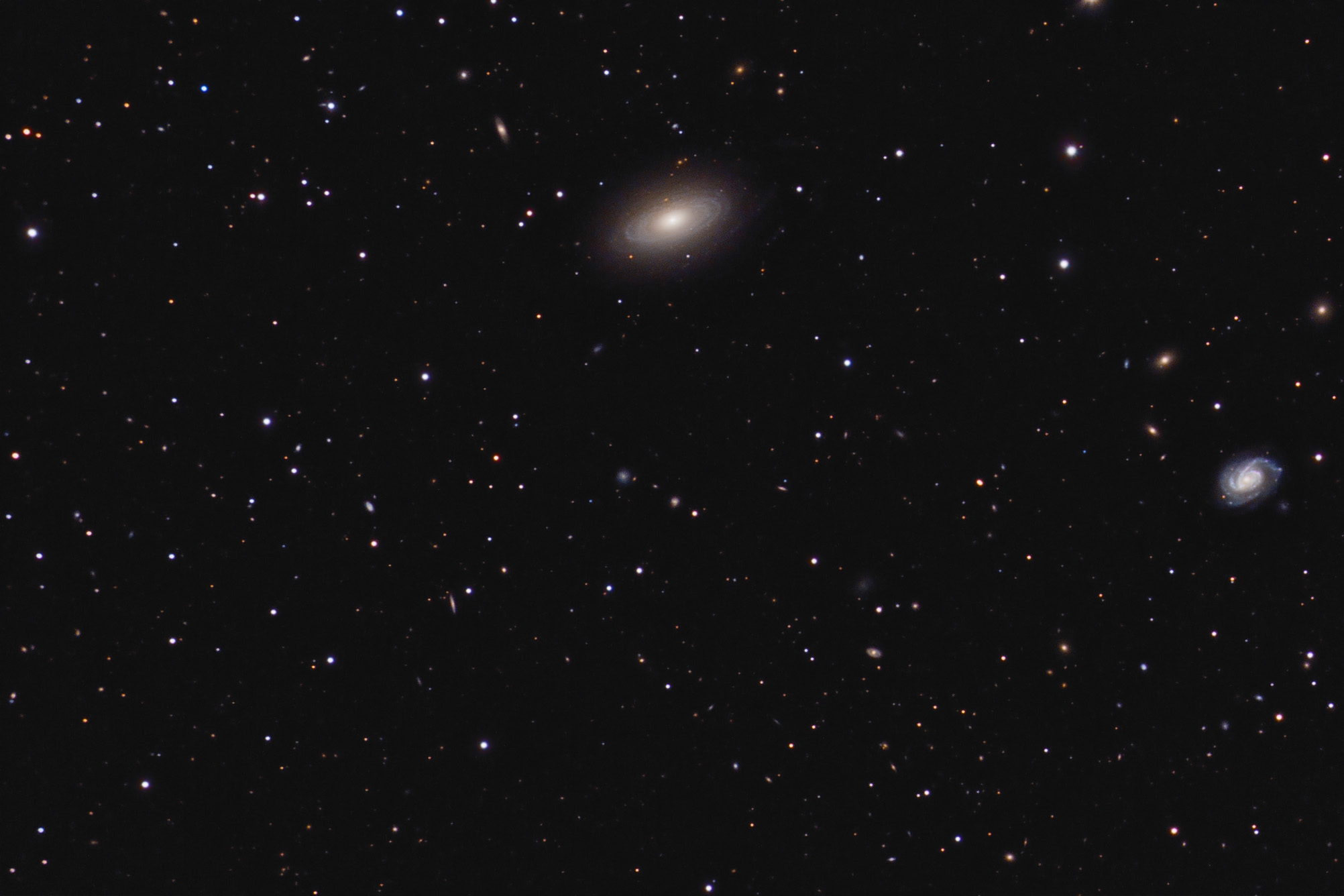 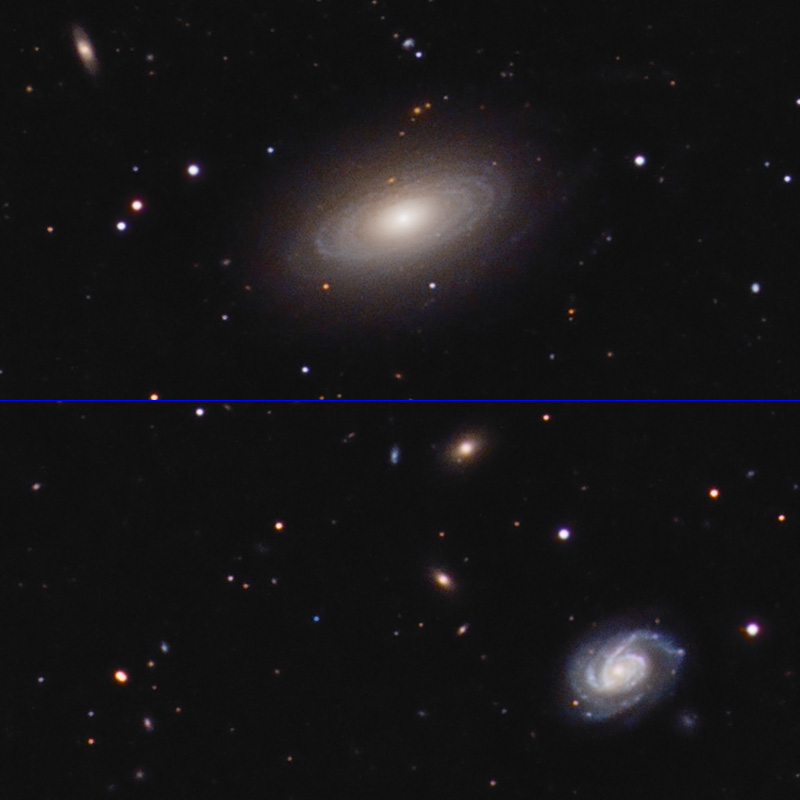 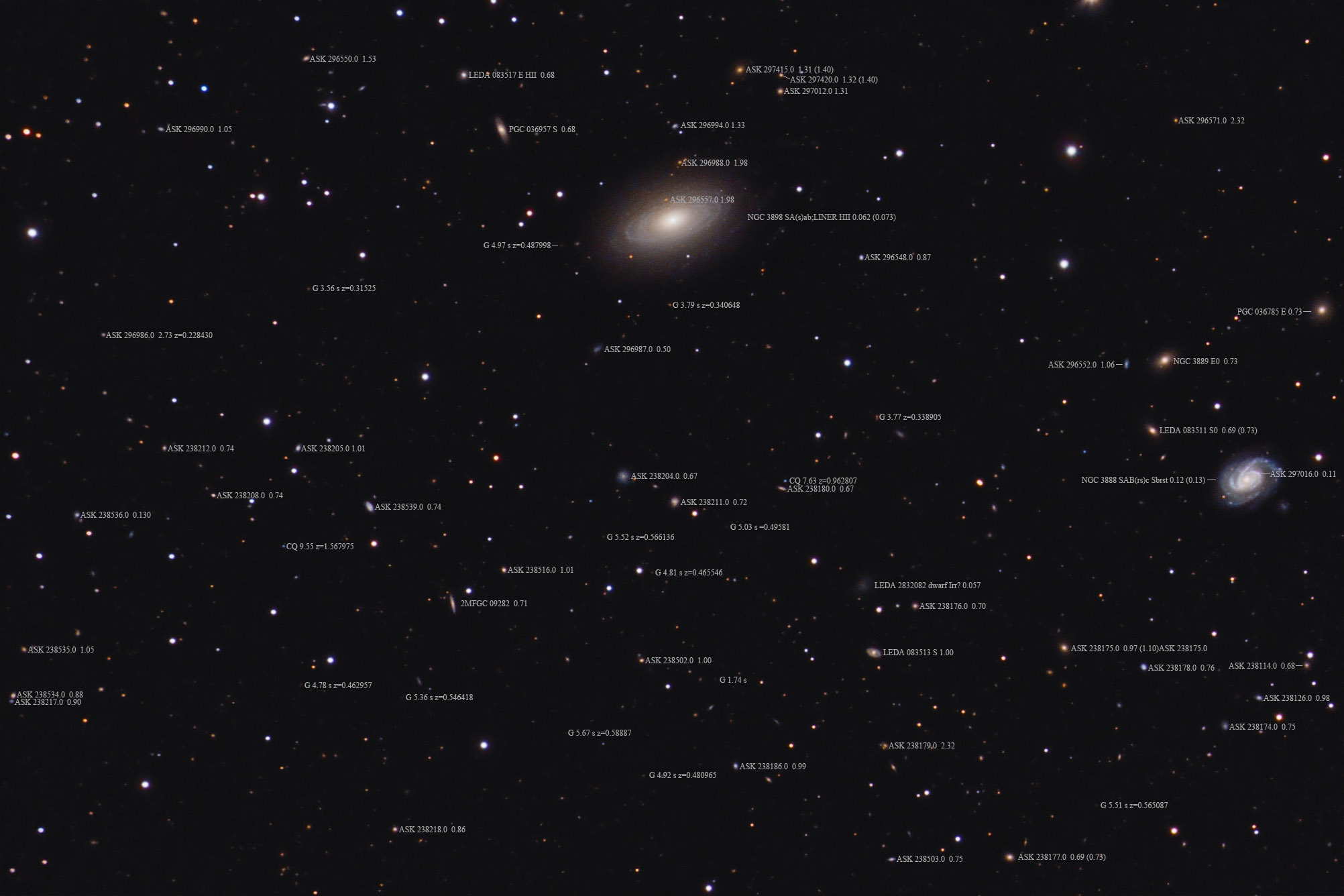