NGC 3945 is a double ring galaxy in Ursa Major just above the bowl of the big dipper. It is about 65 million light-years distant (64 by redshift). It is classed by NED as SB(rs)0+ with a LINER core. The NGC project says more simply SB0. It reminds me of NGC 2859 I posted February 2012. It too has a double ring structure but is seen a bit more face on. I see a small fuzzy blob on the east-northeast outer edge of the outer ring. NED shows nothing at its position. It is seen on the POSS plates so is real. Is it the remains of something NGC 3945 is digesting? I have no idea. A Hubble image of the galaxy\'s core shows several dust clouds I wasn\'t able to resolve. An amateur\'s processing of the HST data can be found at: http://www.flickr.com/photos/77452188@N05/7281940538/lightbox/ . The galaxy lacks a central bulge. At one time it was thought such galaxies didn\'t have a central supermassive black hole at their core but the HST data says it likely has one, about twice the size of the one in our core though the data is fuzzy enough it could also indicate no black hole but that is of a low probability from how I read the papers. At 65 million light-years the galaxy is about 120 thousand light-years across, about the size of our galaxy if some current papers resizing the Milky Way are correct.

NGC 3945 was discovered by William Herschel on March 19, 1790. It is in the original H400 program. My log for that on the night of April 16, 1985 hurt by humidity at up to 150x says; \"Small, round galaxy with a bright inner circle surrounded by a tight halo. Apparently, this halo wasn\'t seen by the writer\'s 8\" telescope.\" I\'m wondering if I saw the outer halo or just the round disk off the bar.

There are two other NGC galaxies in the image. To capture them I had to put NGC 3945 on the right side of the image. They are NGC 3975 and NGC 3978. They share almost the exact same redshift so are a true pair though NGC 3975 is much smaller. Still, NGC 3975 is rather large at 90 million light-years. So that makes 3978 enormous at over 250,000 light-years measuring the plumes. Just the arms give a size of 190,000 light-years. Still a monster of a spiral galaxy. So where did the plumes come from? I\'d think NGC 3975 would be highly distorted if it interacted with it but it looks pretty normal with no sign of plumes. To complicate things NED shows two tiny galaxies against the disk of NGC 3978. If real and in the disk as NED seems to indicate then they could be the remains of its latest meal of dwarf galaxies. That could account for the plumes. Problem is they are right on fragments of spiral arms and appear in my image as nothing more than star clouds similar to several others seen along the arms. So are they galaxies that both happened to align with arms or star clouds in the arms? I feel the latter is most likely but have pointed them out in the annotated image but with the notation G?

There are quite a few galaxies in the annotated image at about 135 million light-years. They are likely members of the Abell 1402 cluster centered just below the lower right of my image. NED lists it at a distance of 137.5 million light-years with a radius of 12.5 minutes (about half the vertical size of my image) It is of group class 0 which has 30 to 49 galaxies. Sufficient to take in most of the galaxies at that distance in my image.

In the upper right corner is a very blue object. Some catalogs call it a galaxy, others a galaxy with a very active AGN and still others say it is a blue quasar. Not taking sides I\'ve listed it as G/AGN/Q to cover all three possibilities. Nearby are a trio of three galaxies (lower right of the G/AGN/Q. While NED lists the faintest (upper left of the three) the other two aren\'t in NED at all so get a question mark for a label. No way to know if they are related or not unfortunately

Several galaxy clusters with a Big Cluster Galaxy at their core are marked in the image, often at a distance that is closer than the anchoring galaxy. Obviously, they both can\'t be right. While the anchoring galaxy is rather obvious in my image I don\'t see the other members but I listed the count shown at NED anyway.

The blue blob on the very lower left edge of the image is due to the 8th magnitude, A3 star, SAO 15664 hitting the very edge of the CCD. I probably should have cloned it out but didn\'t think of that at the time. 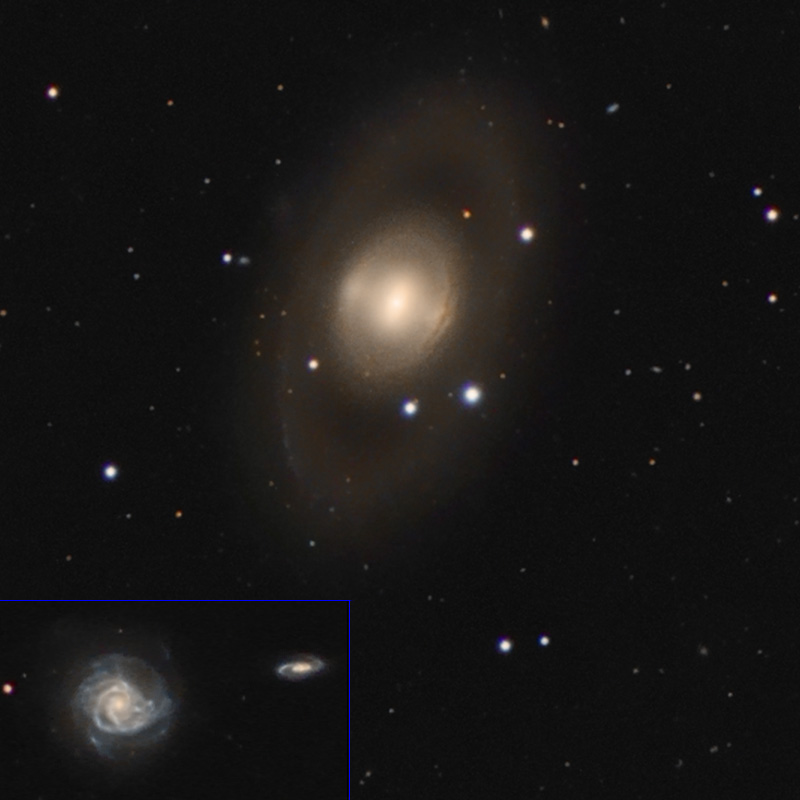 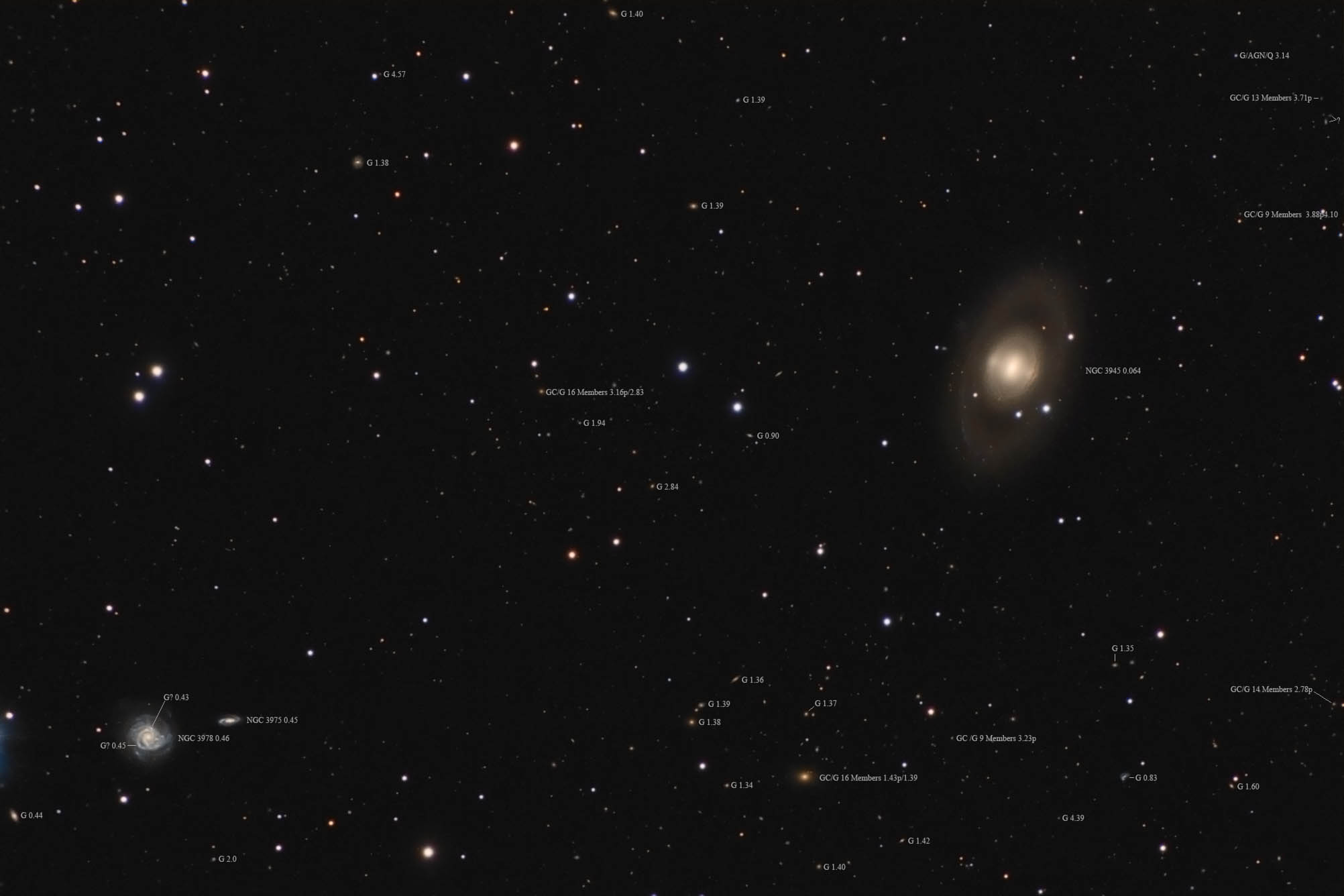 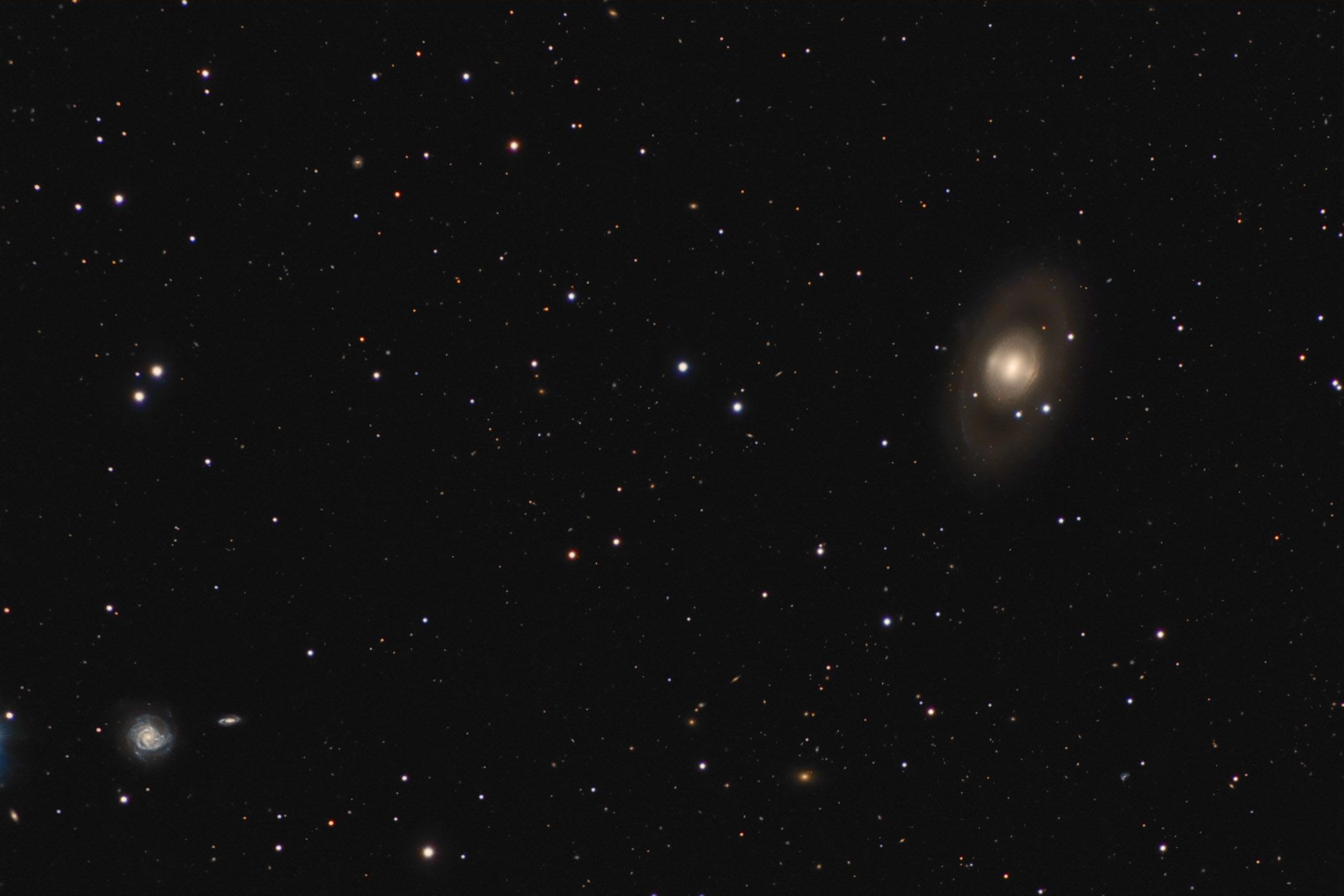