SN2011by was discovered by Zhangwei Jin and Xing Gao (China) on 2011/04/26.823. It is in the Ursa Major Galaxy NGC 3972. My awful spring weather prohibited my imaging it until almost exactly a month later on May 26.193 UT. It is a type 1A supernova. These are used a \"standard candles\" to measure distances to galaxies. In fact, they are responsible for the discovery of \"dark energy\" that is now causing the expansion of the universe to speed up at an ever increasing rate as its density decreases. To be used for this purpose we must know the distances to nearby galaxies by other means. NED publishes both a redshift determined distance and one by other means. Tully-Fisher in the case of NGC 3972 which is based on the rotational speed of spiral galaxies. I show both distance measurements in the annotated image. Note they are not in good agreement. This may be a case of the supernova improving the distance measurement to a nearby galaxy. I suspect it will have Hubble looking for Cepheid variables in the galaxy to better pin down its distance. Several other NGC galaxies are in the image. The two in the upper left corner have a secondary distance measurement as well but not being spirals it is different. In this case, it is SBF which stands for Surface Brightness Fluctuations. This is based on the idea that the more distant a galaxy of this type the less we can resolve the granular nature of partially resolved stars. The more even the brightness at high resolution the more distant the galaxy. In this case, the two measurements are in good agreement.

I show it at about magnitude 12.7 in my image. Both the star and galaxy should be visible in an 8\" scope at a dark site. Not being able to isolate the star against a dark background this is only an estimate as the comparison stars were measured against the dark sky. Also, the star is so bright it went outside the linear response of my chip. I normally use the ST-7 for this type of thing as it is better calibrated and has a much wider linear range. It isn\'t currently on the scope as its USB cable went bad and until I dismount the telescope and run a new one it is out of service. The SN is rather blue having a blue filter magnitude of 12.8 and a red magnitude of 13.1. So why is the white light measurement even brighter? That\'s the non-linearity showing up. Without filters, the star is into the non-linear part of the chip\'s range causing an over bright reading. The filtered stars stayed in the linear range of the chip so are more accurate. Still, due to the background issue, I expect the true brightness to be about a third of a magnitude dimmer than these measurements indicate. Maybe more as current estimates put it between 13.15 and 13.65 that I\'ve seen.

All three NGC galaxies were discovered by William Herschel on April 14, 1789. They aren\'t in either of the H400 projects. 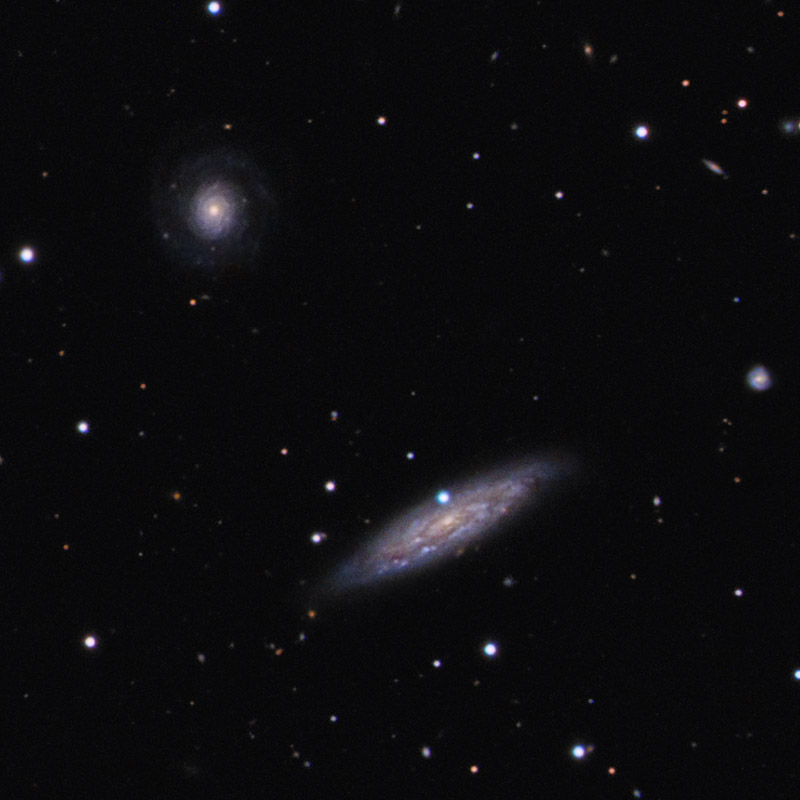 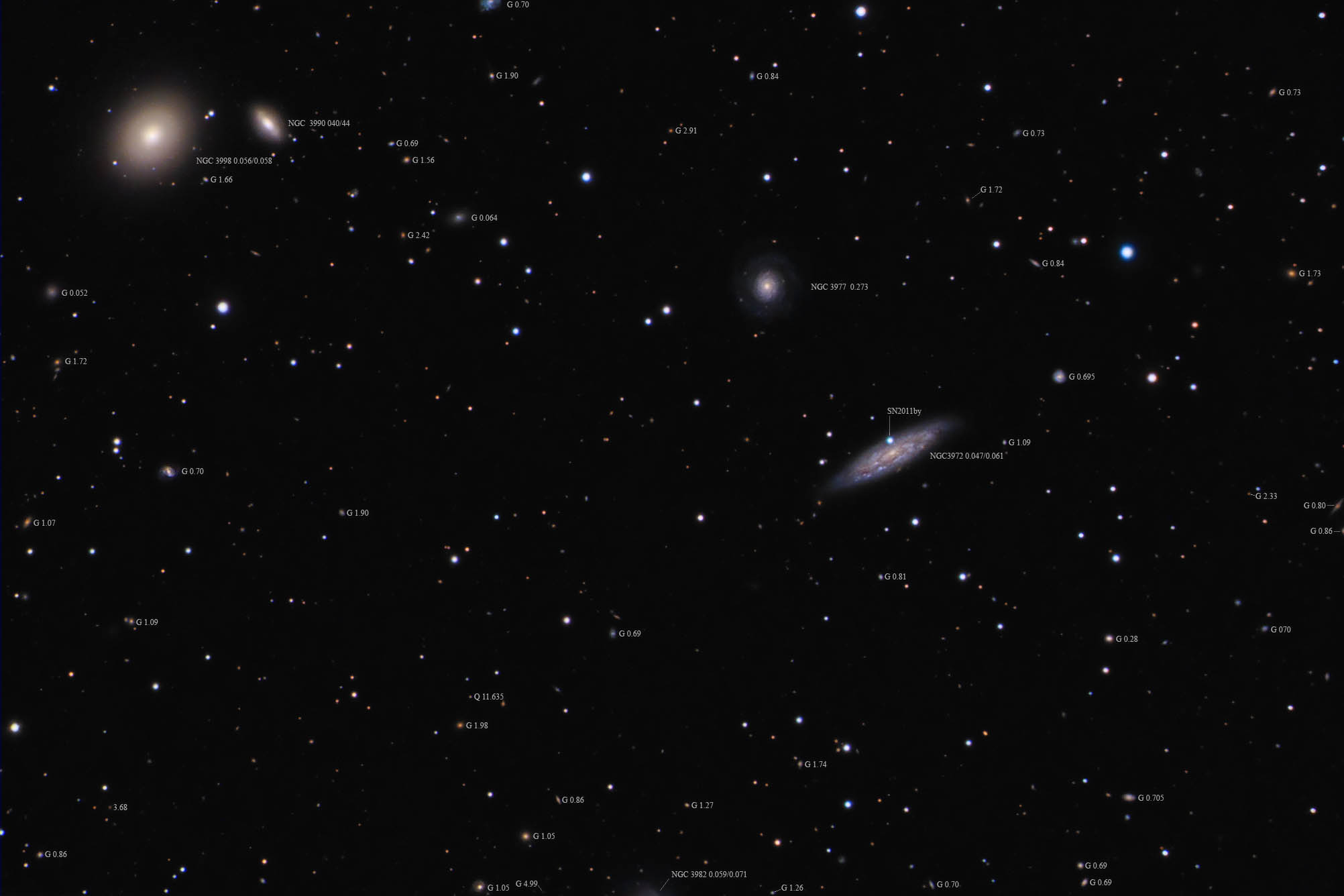 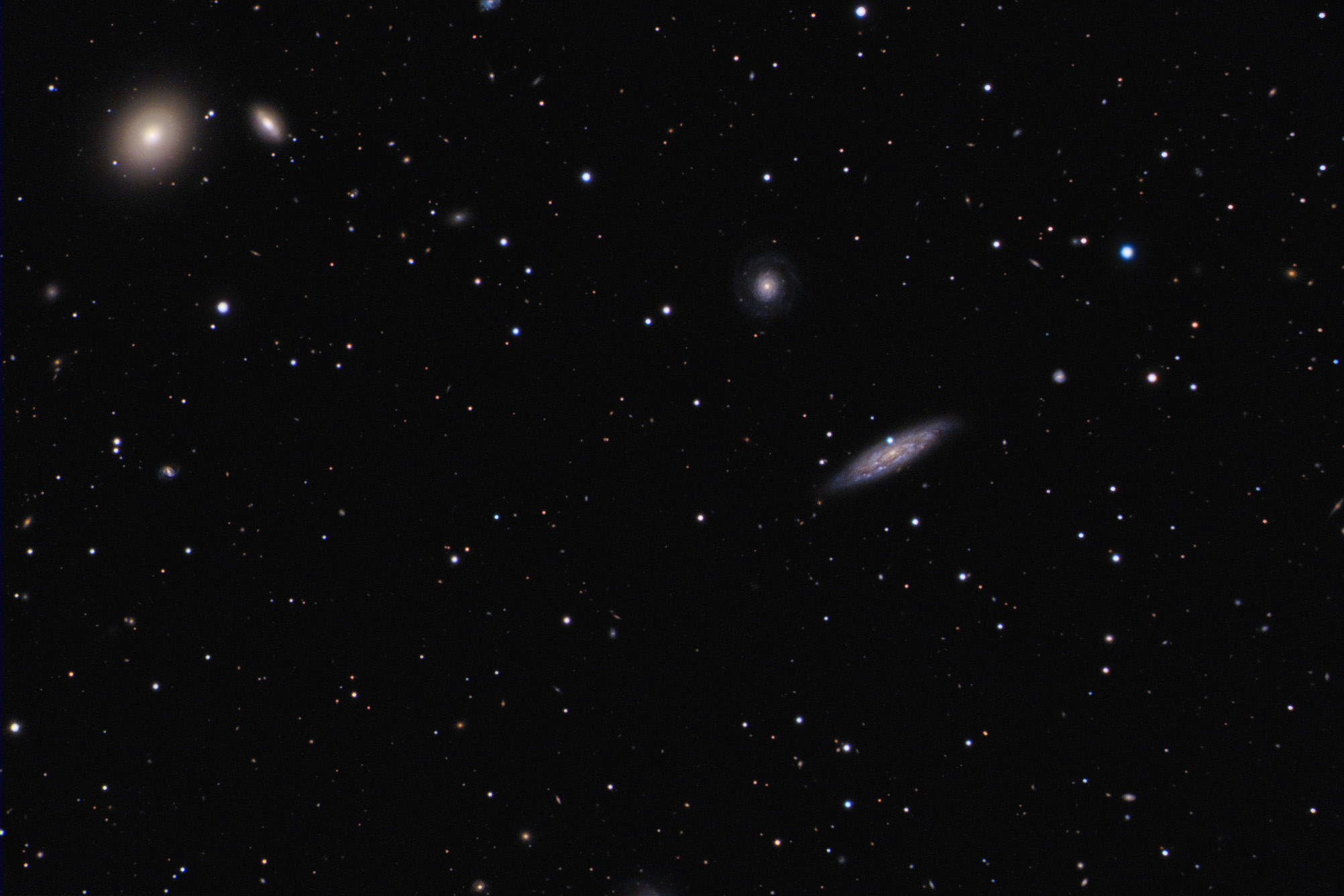