NGC 4004 is one of the strangest galaxies I\'ve imaged that didn\'t make it into Arp\'s Atlas of Peculiar Galaxies though it certainly appears more peculiar than dozens that are in the Atlas. It is located in the far northwest corner of Leo, right beside Coma Berenices and Ursa Major boundaries. Redshift puts it about 170 million light-years distant. It is likely a member of the ZwCl 1154.9+2806 galaxy cluster which is some 70 minutes of arc in diameter with 209 members according to NED. It is also known as the UGCl 243 galaxy cluster. It is also part of the NGC 4008 galaxy group of 14 galaxies. NED shows the group\'s distance at 170 million light-years but the distance to NGC 4008 itself (out of my image to the north) as 180 million light-years. No size is listed for the group.

NED classifies it simply as peculiar and notes it is a Narrow Emission Line Galaxy which would indicate a lot of star formation is going on, likely within the small, bright \"s\" shaped region around the core and the many star forming regions (blue) seen in its tidally distorted arms. The NGC project classifies it as Irregular another source says \"disrupted?\". There seems little agreement on this one other than it is very strange indeed. I was surprised to find so little on this highly unusual appearing galaxy. What little I did find seems to indicate it is thought to be the product of a galactic merger. One very old paper (1959) said; \"Possibly two Sc (theta?) in contact and an E.\" indicating they saw three galaxies superimposed. Shows the state of photography back then as it certainly appears as one highly disturbed galaxy in today\'s images. I see no obvious second core so the merger appears rather complete though it has left the structure of the galaxy highly disturbed. It was discovered by William Herschel on April 11, 1785.

Nearby is NGC 4004B which may be IC 2982. NED says this IC identification is \"highly uncertain\". SIMBAD has no such qualification. The other NGC galaxy in the image is NGC 3998 a compact elliptical galaxy so rather featureless. It was discovered by John Herschel on April 13, 1831. How his dad missed it is unknown. It was bright enough but rather star-like so he may have not recorded it thinking it a star. Only a guess on my part. It could be it was just outside his scan as his field of view was quite small compared to what modern telescopes can deliver for their focal length.

Arp thought there was significance to quasars being found around peculiar galaxies and came up with the idea that they were nearby objects ejected from these peculiar galaxies with the redshift being due to a factor other than cosmological distance. With many with widely varying redshifts this field should have been interesting to him but I can\'t find that he knew about it.

The field seems to contain another group of galaxies at twice the distance of NGC 4004, about 380 million light-years. Searching NED for a cluster at this distance within a degree of NGC 4004 came up empty.

The field is full of distant faint fuzzies, nearly all of which have no redshift data. The couple that did are shown on the annotated image.

NGC 4004 seems to remind my strange brain of the \"Mark of (a dyslectic) Zoro\" as it is a mirror image of a \"Z\" and unsymmetrical as well. 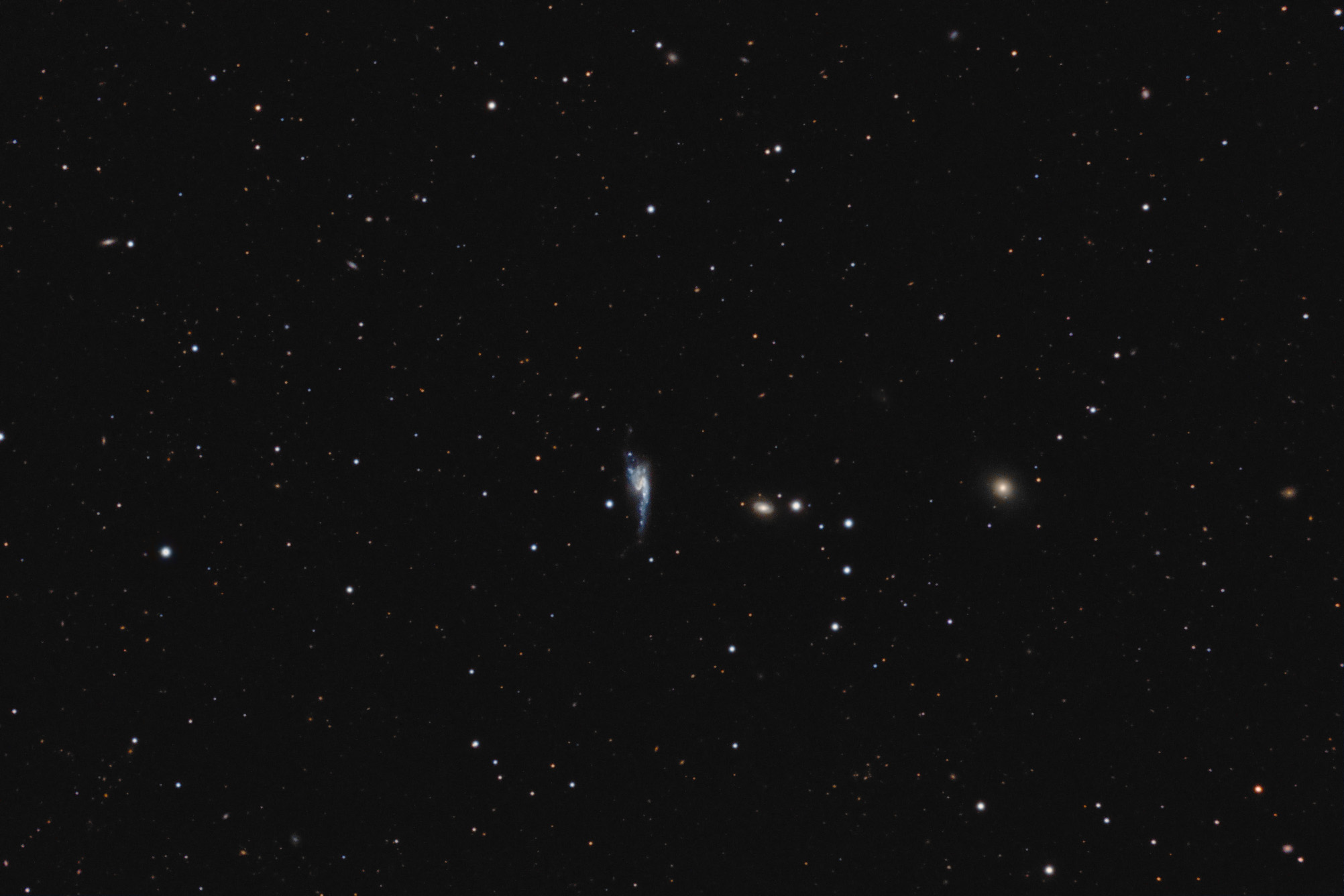 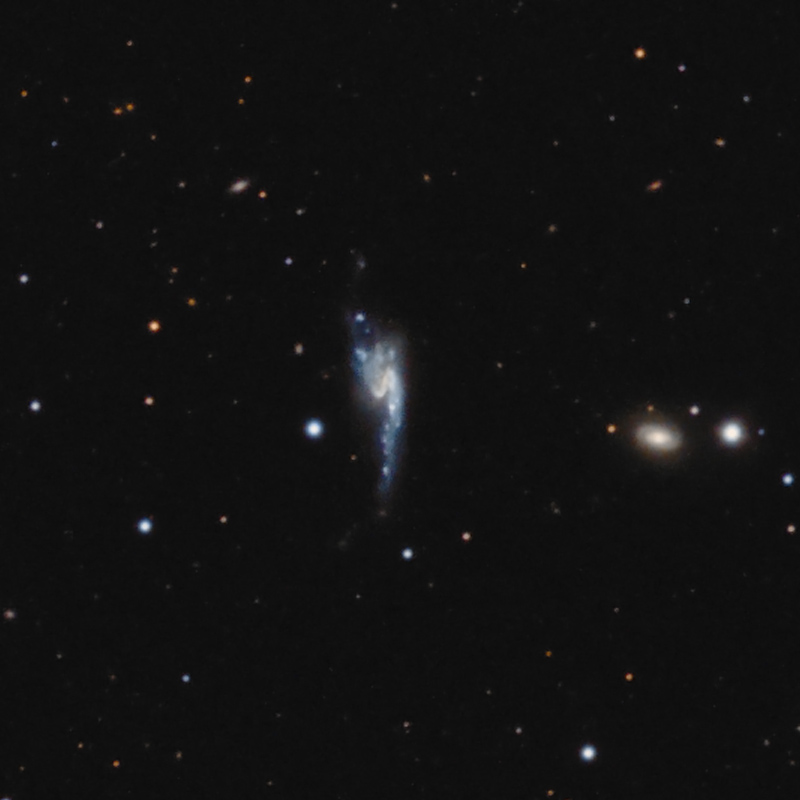 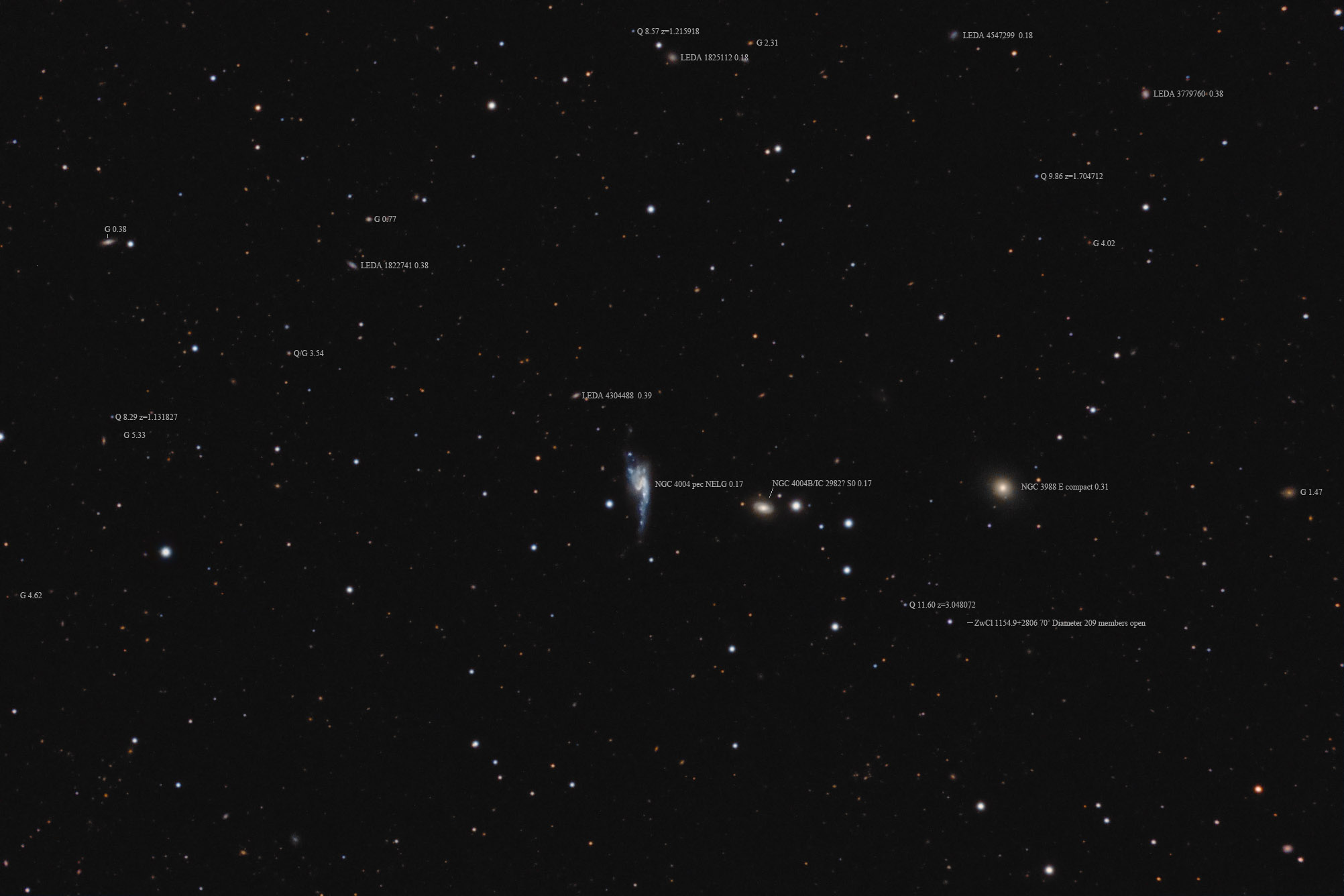