NGC 4051 is a very well studied spiral in Ursa Major only some 43 to 46 million light-years away. It is considered midway between a true spiral and a barred spiral by some sources. It is one of 6 galaxies Carl Seyfert studied in 1943 that later became classic Seyfert Galaxies. While most sources consider it a Seyfert 1 galaxy I find papers say it is 1.25, 1.5 and 1.8 among other definitions. The Seyfert classification can be considered a quasar that is no longer active enough to meet that definition but still has an active supermassive black hole. It is considered one of the least luminous core Seyfert\'s known. While the Seyfert designation refers to the activity of the black hole at its center I was pleasantly surprised at how many HII regions popped out in my simple LRGB image without the need to use any H alpha light to bring them out. One region, however, appears white. This caused many galaxy catalogs to pick it up as a galaxy. It is noted as ASK 318879.0 in the annotated image but has many other galaxy designations. Still, NED says it is an HII region, not a galaxy and its redshift is similar to that of NGC 4051. On the other hand ASK 318868.0 in the southern part of the galaxy appears to be a true galaxy at 72 million light-years.

I put NGC 4051 on my list because many sources call it a 3 armed spiral which was one of Arp\'s classifications for his Atlas of Peculiar Galaxies. One source calls it 4 armed. But to me, these extra arms appear more like arm segments and a split arm (which was another Arp category). NED lists 48 different designations for this galaxy, a good indication of how well studied it is.

This one was discovered by William Herschel on February 6, 1788. It is in the original H400 program. My note from that with my 10\" f/5 on April 20, 1985 on a humidity hurt night at 100x says, \"Large oval halo coming off of a highly elongated central core. Might be a barred spiral? Large diffuse halo, best seen with averted vision.\"

The annotated image lists all objects NED had a redshift value for but for one galaxy cluster with very vague coordinates and nothing obvious showing in the area that I could use to point to it.

I ran into a very unique processing issue with this one. The red data was taken on a night of very poor seeing. So poor I gave up and took the other colors a different night. The luminance, however, was taken on a rather good night. When I went to process the color data I found the seeing during the red image had moved the stars every which way compared to their position on the blue and green images. Not only were they larger on the red image some were west of their true position, others east, north or south etc. This resulted in some very mismatched stars that even RegiStar couldn\'t handle. You will see various red and blue sides to stars at rather random distribution though in any one small area all seem off in one direction just at different amounts. I \"fixed\" the most serious of these but it would have taken all year to fix them all individually. Oddly this didn\'t seem to bother the galaxy itself. Maybe next spring I\'ll redo the color data to fix this issue. (Edit: So far it hasn\'t happened) For now, I have to remember that while I can take color data on poorer nights than luminance there is a limit to how far I can take that and get a usable image. 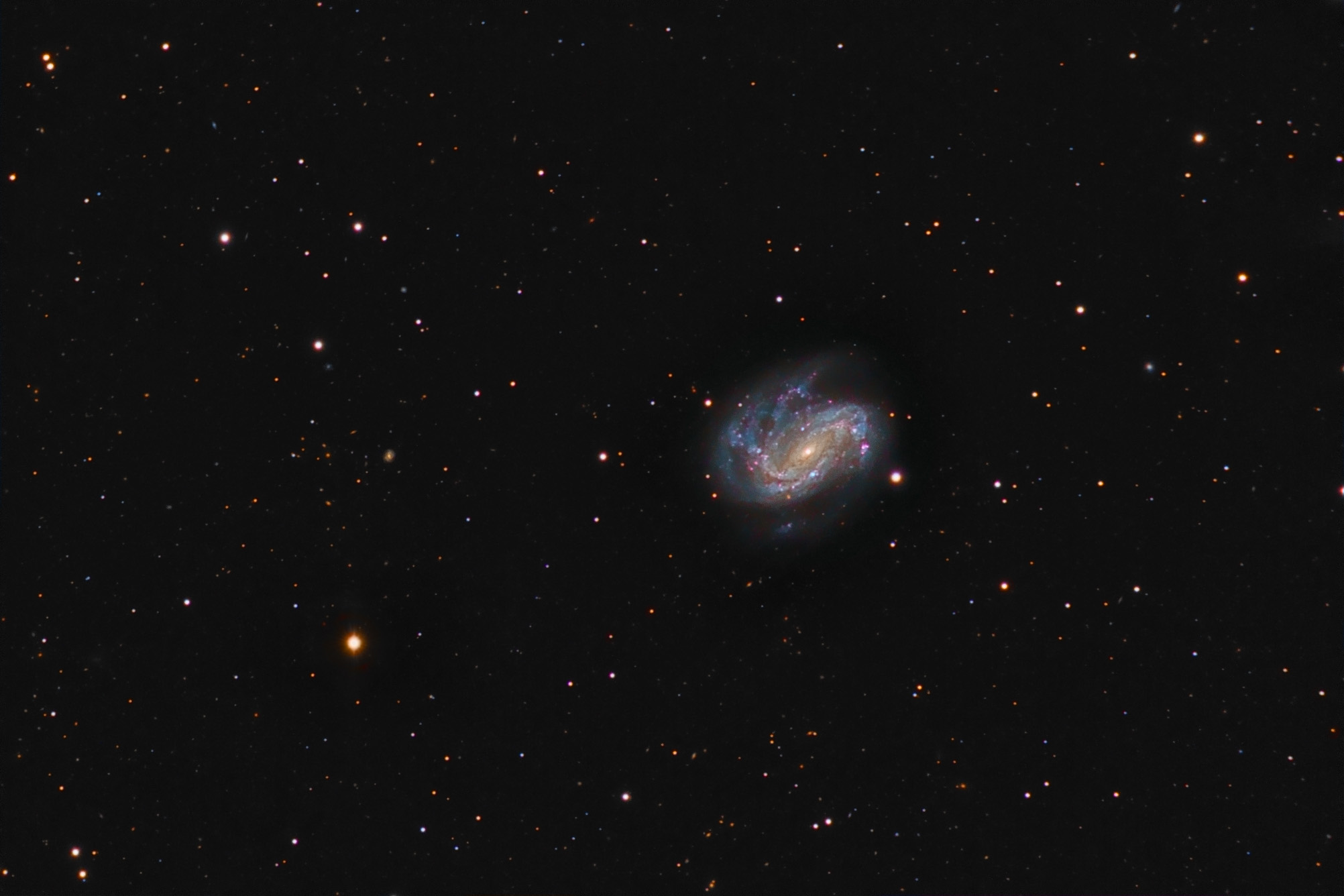 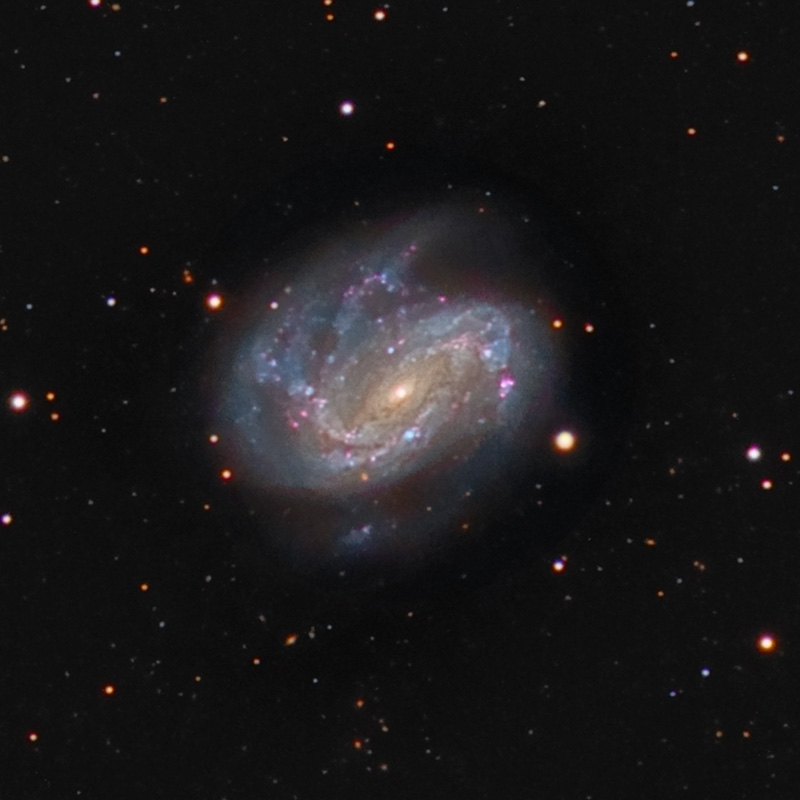 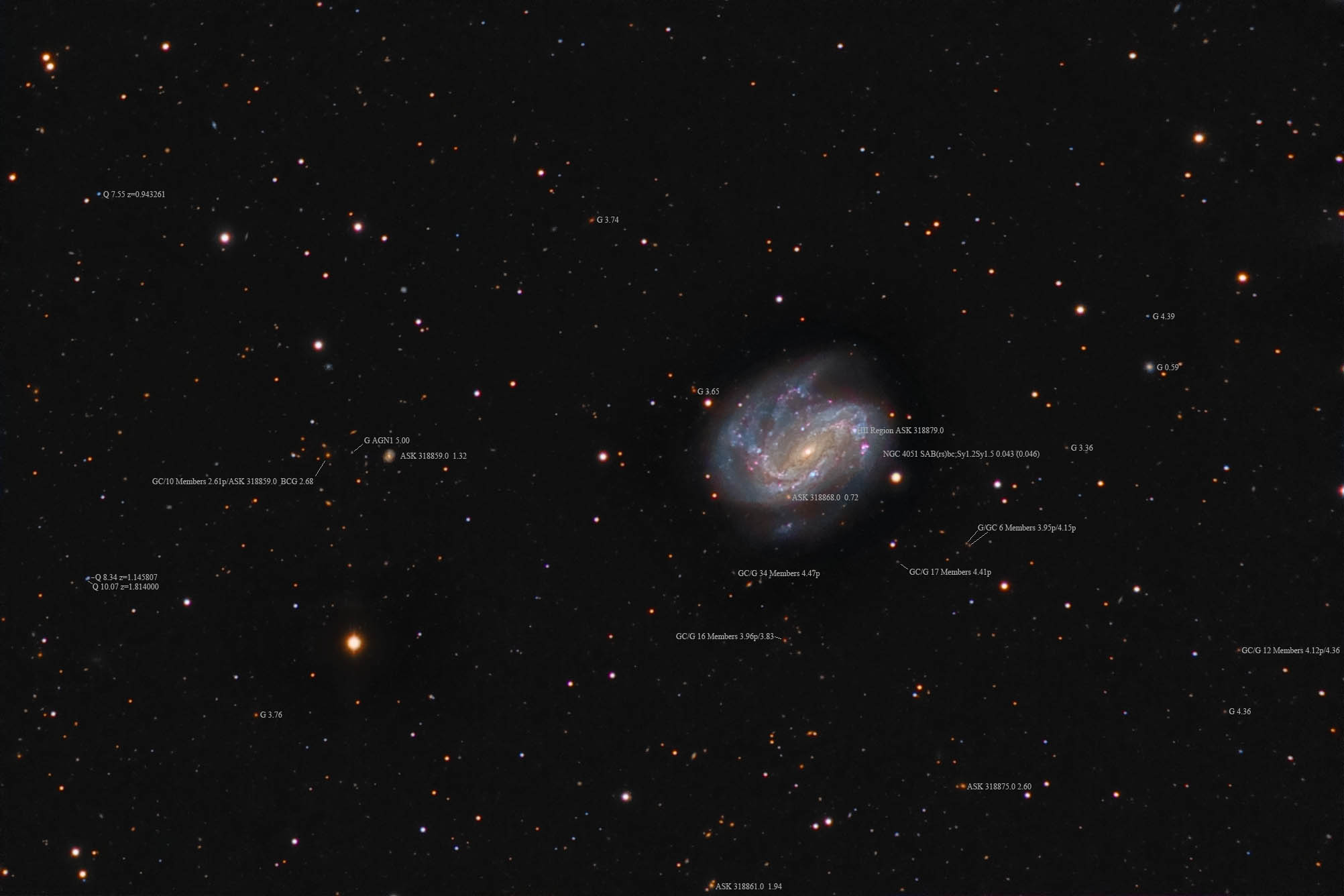