NGC 4108 is a triple galaxy system in Draco about 120 million light-years distant. It actually is a group of 4 galaxies, one is not an NGC galaxy so doesn\'t carry the NGC 4108 catalog entry. There\'s a faint indication the NGC 4108 triplet have interacted in the past. It was NGC 4108B that attracted my interest to the group. It appears to be a face on spiral galaxy, classed SAB(s)d pec?, that has a disrupted arm structure and a dust lane right across its core. That makes it look like two half spirals that are merging. Even the core is quite blue indicating star formation has been recent and plentiful in recent times. The CGCG says of it: \"Blue post-eruptive disrupted spiral with compact knots and bars.\"

NGC 4108A lies west of the other two. It is classed as SBbc:. The arm structure seems rather weak and certainly not symmetrical. It is apparently more disturbed when seen at radio frequencies. A note at NED says: \"NGC 4108A has a highly warped H I disk [Fig. 13(d)], with the major axes of the outer parts of the H I disk being misaligned (sic) by ~45^deg^ with respect to the optical major axis. The velocity field is peculiar in that at the southern tip the axis of rotation curves in the opposite direction one would expect from the warp in the H I disk.\"

The fourth member of the group, UGCA 272 is listed as E0/S0. It appears rather featureless and nearly white in color but does have an active core since it is listed as having a narrow line active galactic nucleus (NLAGN). Something has stirred up its core to high activity that is mostly hidden from our direct view.

The image contains quite a few quasars and quasar candidates (UvES), 11 of them. Most only have a photographically determined redshift (noted by a \"p\" after the distance) which isn\'t as accurate as a spectroscopic redshift. You\'ll see \"pred\" after the distance to one galaxy. That is a predicted redshift whatever that means.

NED shows three galaxy clusters in the image. One that is barely visible a bit northwest of NGC 4108A. More obvious is the pair to the west of NGC 4108. Though I\'m not sure it if it is one cluster with two designations or two separate ones at virtually the same distance. There are two bright, large galaxies though only the southern one is listed as being a Bright Cluster Galaxy even though both are listed at the same coordinates as the cluster they anchor. In any case, there are quite a few galaxies at their distance (about 1.5 billion light-years) not only around the two big galaxies but across the image but for the lower left corner region. No size was given for either cluster, only a count of 14 and 13 members.

As usual for this year clouds and haze really did a number on the depth of this image. It is a good 1.5 magnitudes short of my normal limit. It didn\'t help that I forgot to turn on temperature compensation and a warm front went through as the image was being taken. Even focusing at every filter change (20 minutes) wasn\'t enough to keep up with the rising temperature which kept defocusing the image, especially at the corners. Corners suffer most when the temperature rises, core loses if it falls and isn\'t compensated for. Between the two issues, this one needs revisiting. Also, one of the two red frames is very weak. While I\'m listing it as using 2 red frames the result is really very close to only one being used. 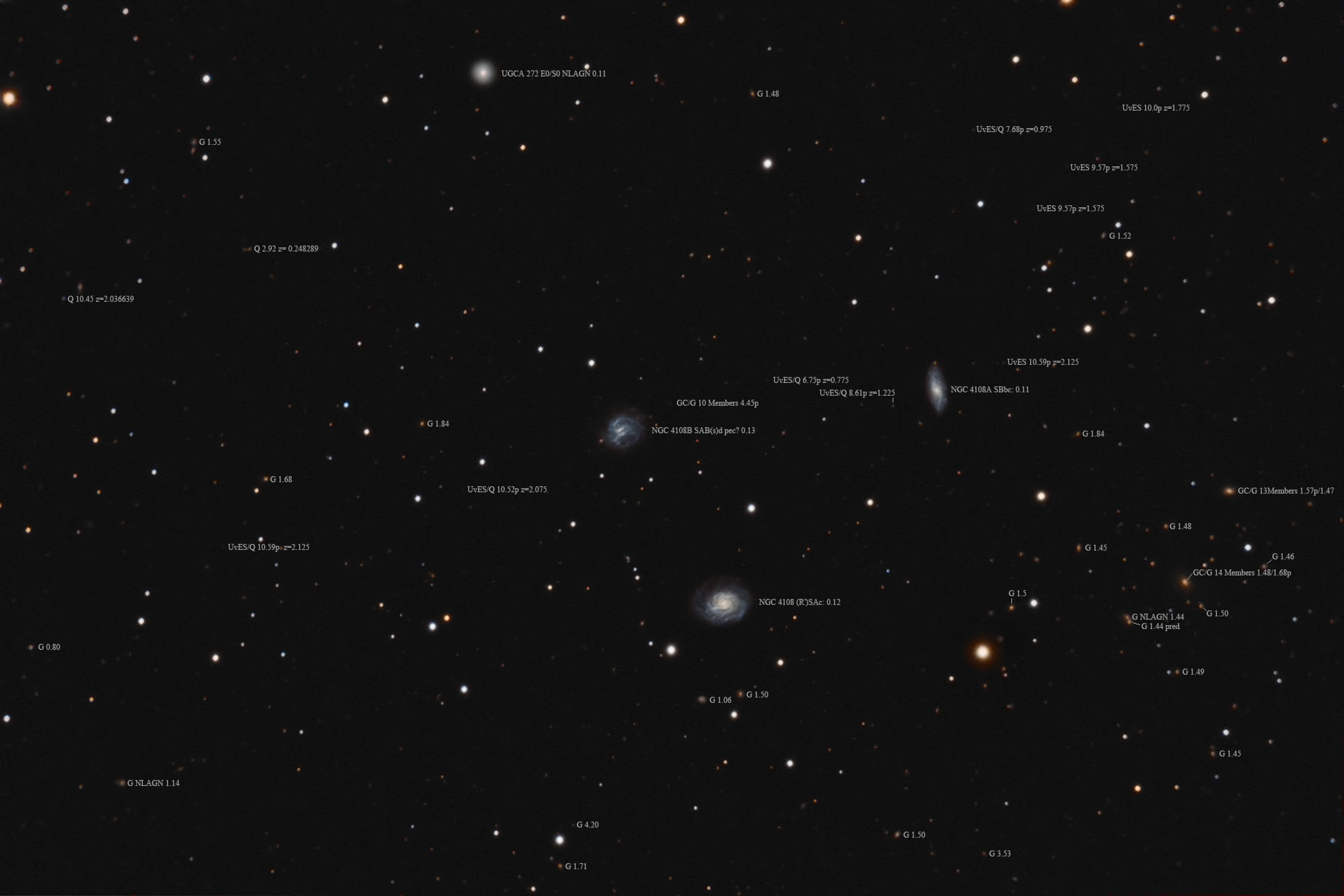 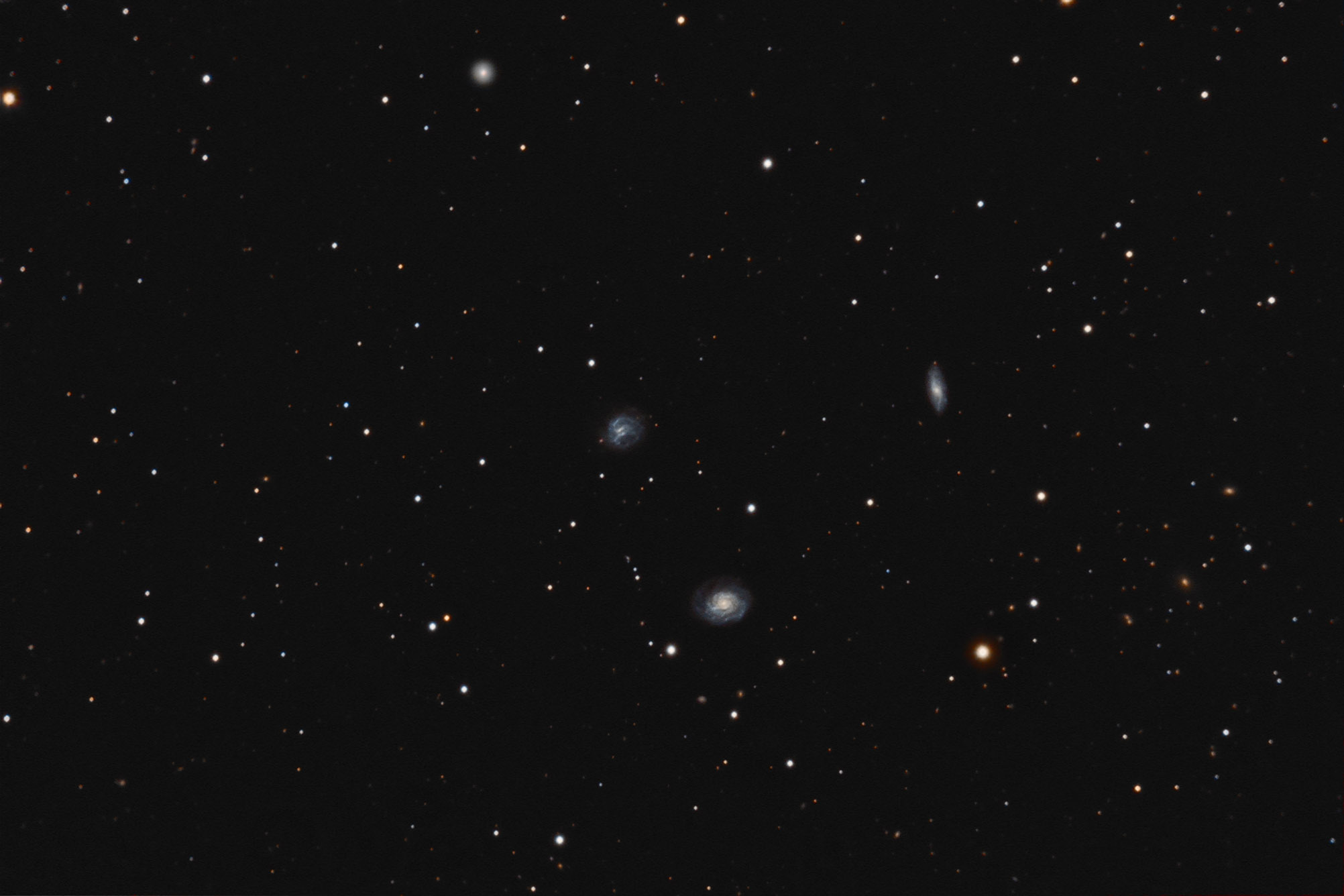 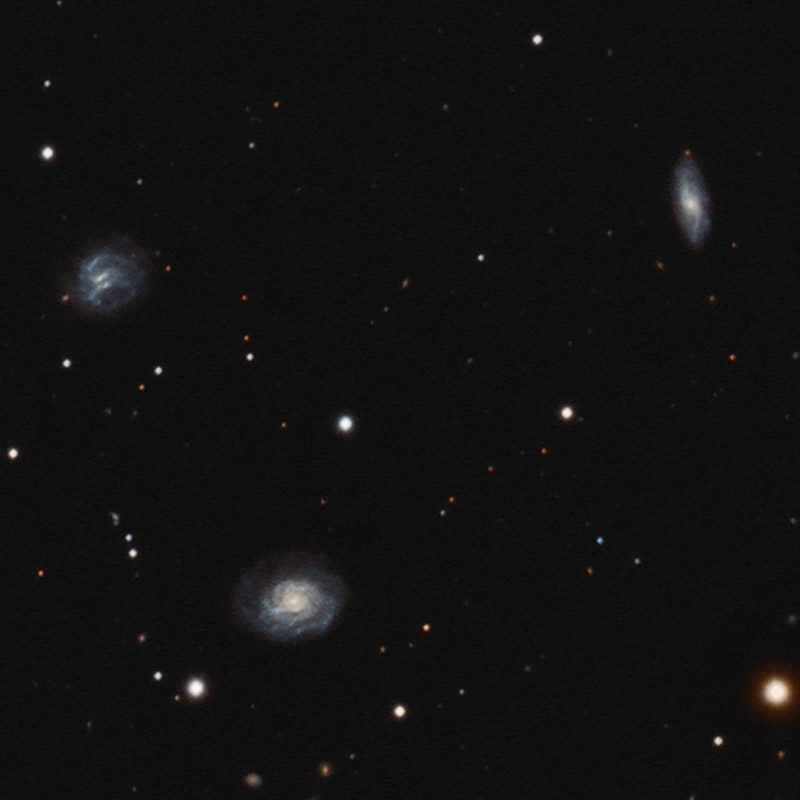