The NGC 4111 galaxy group also known as WBL 380 consists of 20 galaxies according to NED though I find no size for the group. NED places the group at a redshift distance of 42 million light-years which isn\'t the redshift of any galaxy in the image. NGC 4111 itself NED lists at 47 million light-years with a Tully Fisher distance of about 52 million light-years. NGC 4111 is a nearly featureless spindle galaxy with HII emission and LINER spectrum. It is about 60,000 light-years long at its redshift distance. It was discovered by William Herschel on January 14, 1788. It is in the original Herschel 400 list. My comment from April 18, 1984 using a 12.5\" reflector belonging to my astronomy club reads: \"Faint galaxies to the south in the same 50x field. Seems to be an edge on but no dust lane seen. Herschel book calls it \'Elliptical with distinct outer arms.\' How can this be when ellipticals don\'t have arms?!?!?!\" I didn\'t mention the NGC galaxies to the northeast. There are only 4 other galaxies in my image with a similar redshift. All the others lie significantly further away. Apparently to get the 20 count for the group distance is ignored? Papers using radio telescopes describe a dust band at right angles to its major axis and visual report a peanut shaped core. That could indicate a recent merger with the dust showing a hint of a polar ring resulting from the merger. I was unable to bring this out, however.

The other galaxies likely physically part of the group in my image are NGC 4117, NGC 4118, UGC 7089 and UGC 7094. NGC 4117 was also discovered by William Herschel but on a different night, February 6, 1788. It\'s not in either Herschel 400 program. It too is a rather featureless S0 type galaxy. It has a dust lane parallel to the semi-major axis and a SY2 core by some papers. This could indicate it too is digesting a recent NED puts it at 54 million light-years by redshift which makes it only 29,000 light-years in size. Even smaller NGC 4118 lies closer with a redshift distance of 40 million light-years giving it a size of only 7,000 light-years. It was discovered April 20, 1857 by R. J. Mitchell an assistant of William Parsons better known as the Earl of Rosse. One problem with this is according to the same source he worked for the Earl from 1852 to 1855 yet the discovery was 1857. Another source gives the discoverer as Lord Rosse himself though nearly all he claimed to discover were really discovered by his assistants from my research. I\'m \"Lost in Space\" on this one.

The remaining NGC galaxy, NGC 4109 lies much further away at 330 million light-years. So while small in angular size is really 63,000 light-years in diameter making it actually slightly larger than NGC 4111. NGC 4109 was discovered by Bindon Stoney, another of the Earl\'s assistants on April 21, 1841. It has a companion MCG +07-25-025. It appears to me to be a rather disorganized barred spiral though NED doesn\'t attempt to classify it. There\'s a third galaxy at about the same distance in the upper right corner of my image that is much smaller in size. They must be related.

There are a number of galaxies at about 73 million light-years in the image. NED does show a group at that distance, SDSSCGB 33732, but with only 4 members. I see 11 in my image.

There are a couple galaxy clusters in the image I could identify and some I couldn\'t. The two only have photographic distance estimates for both the cluster and the bright cluster galaxy I use to mark the location. The one UvES object is a quasar candidate with only a photographic redshift. 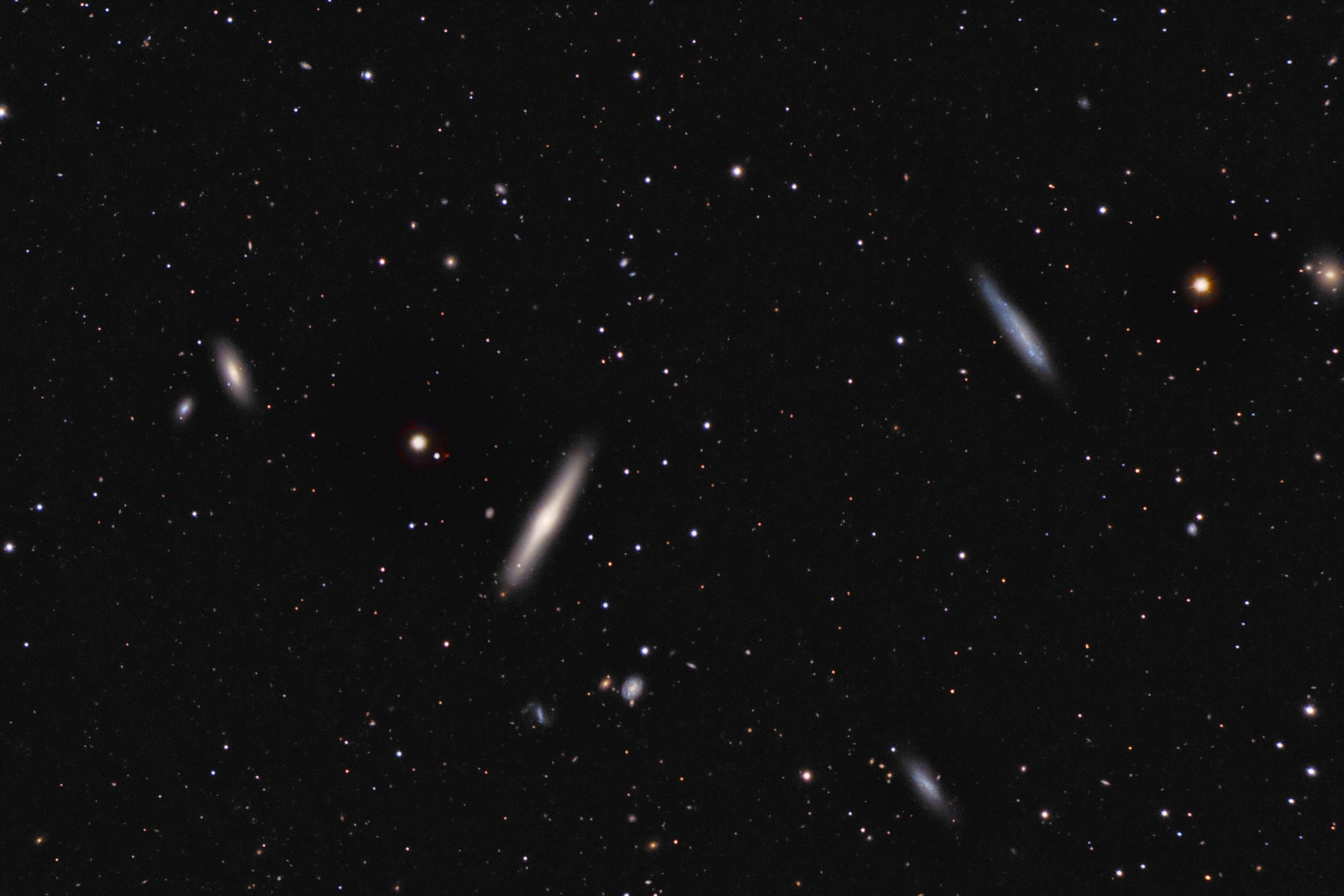 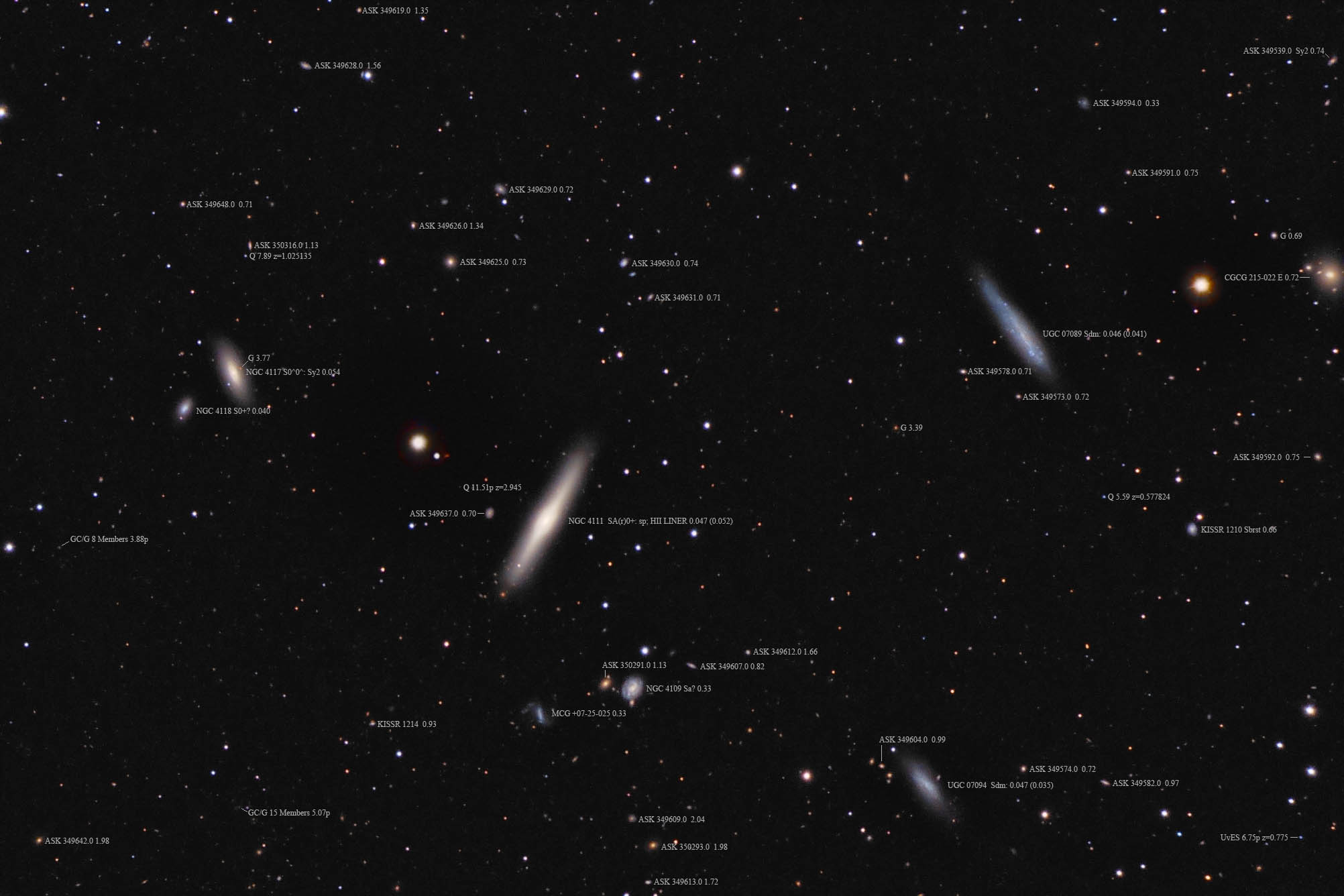