NGC 4145 is a barred spiral in western Canes Venatici about 68 million light-years distant. Redshift puts it a bit closer, other measurements at NED average 67 with the Spitzer Space Telescope website saying 68. It is considered part of the Ursa Major Galaxy group. While it is listed as having HII emission and a hint of it is seen in my image most say it has little dust and gas left so it\'s star-forming days are mostly over. It still has some blue in its arms, however. The Spitzer image is rather dim where star formation would normally be seen in IR indicating there really isn\'t much star formation going on. NGC 4145 was discovered by William Herschel on March 18, 1787. It is in the second H400 Observing Program.

There is a star like object toward the northwest end of the bar yet the galaxy shows no core. Is this object its core pulled off center? One note at NED indicates that either this is the core or a star, they can\'t tell which. I\'d expect a core to be rather bright in the Spitzer image yet it has only about the same brightness difference as seen in visual light. If a star it is somewhat red so would show in an IR image at about the brightness seen in the Spitzer image. My seeing is so poor my stars are pretty fuzzy. In better seeing the PSF of the stars would be enough different from a core that it would likely answer the question but the seeing was so poor in my image some stars have a PSF similar to distant galaxies. I\'d expect a small bright core could have a PSF similar to a star in my image thanks to the seeing. Still, for now, I am going to say it more likely a star though Adam Block says it is the core and off-center because this galaxy is interacting with NGC 4151 (yet to be imaged thanks to my lousy spring) to the south. (Edit: It has been taken since this was written.) To me, a force that pulls the core off center would create noticeable (likely great) distortion in the galaxy. I see none. Though NGC 4151 does have huge faint outer arms that could indicate it has interacted with some other galaxy. Or it may be this way due to digesting a recently eaten galaxy. Adam\'s direct image lick has died but you can see it here http://annesastronomynews.com/photo-gallery-ii/galaxies-clusters/ngc-4145-by-adam-block/

The other major galaxy in the image is NGC 4145A. Its redshift distance is about the same as the Spitzer distance for NGC 4145. If correct they are true companions. Even the single Tully Fisher measurement is not greatly different. A note at NED mentions a small galaxy \"attached\" to it. Even in my poor seeing it doesn\'t appear attached though there is a faint star between it and NGC 4145A. Redshift shows they are separated by over a billion light-years. So much for it being \"attached\".

The annotated image has one galaxy west of NGC 4145 marked by a question mark. As usual, it means the object isn\'t listed by NED. Low surface brightness galaxies sometimes suffer this fate. Why I don\'t know. I don\'t hunt for these but stumble across them. I\'m sure they are more common than my annotated images indicate. 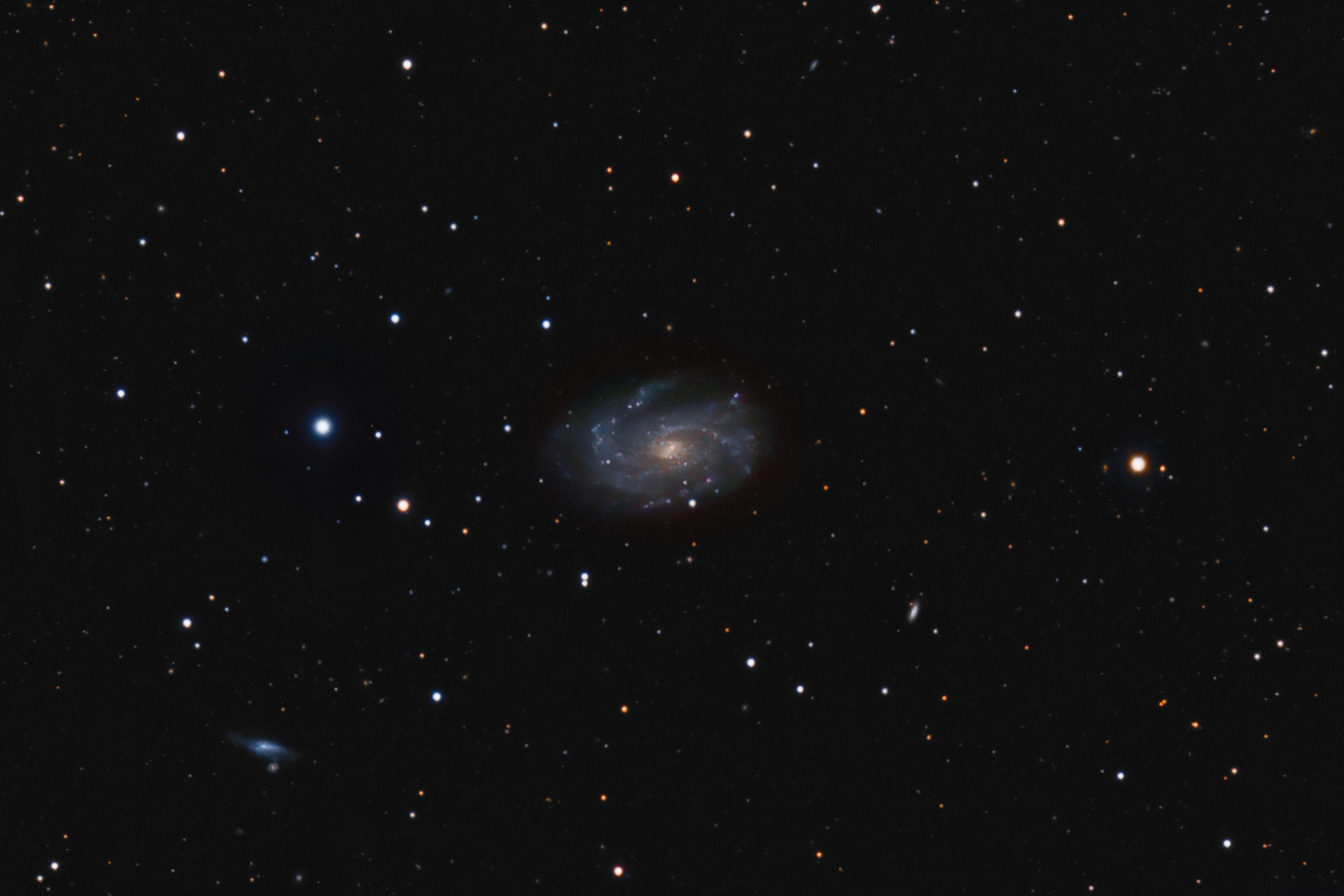 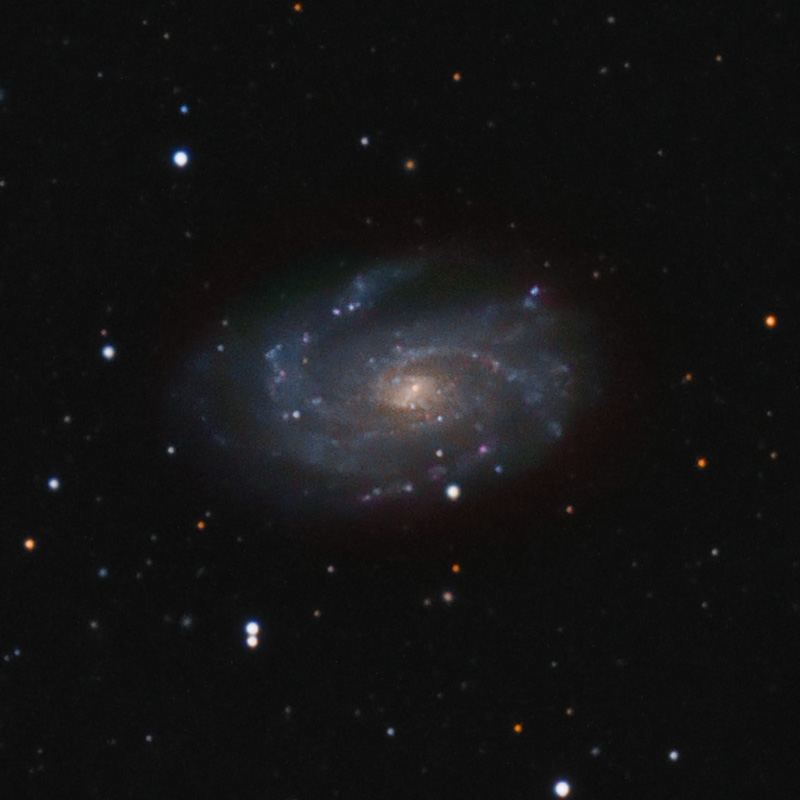 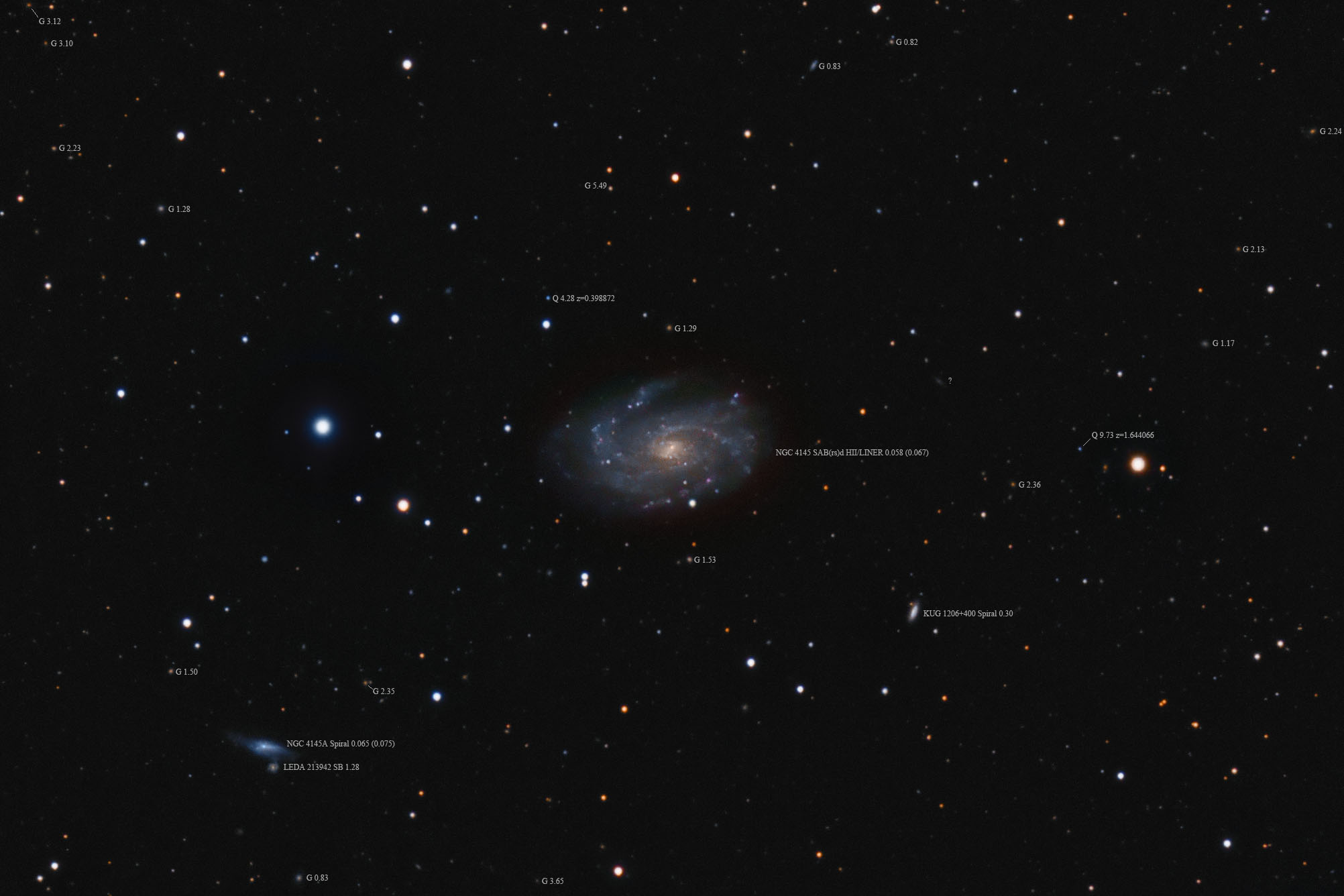