NGC 4147 is a globular cluster Coma Berenices about 63,000 light-years from us and 70,000 light-years from the center of the galaxy so it is in the far outer reaches of our galaxy\'s halo well above the galaxies plane. It was discovered by William Herschel on March 14, 1784. A few weeks earlier, on February 15, 1784 he found an object now listed as NGC 4153. There is nothing at that position. Some think it was really what we now know as NGC 4147. SIMBAD considers it non-existent. Others including NED and my database in The Sky say the two are the same object.

The globular is considered by many to not be our globular at all but that of the Sagittarius Dwarf Elliptical Galaxy (SagDEG) that is being torn apart and digested by our galaxy. Other globulars are also considered likely members of this mostly dismembered galaxy including M54, Palomar 2, Palomar 12 and Whiting 1. M54 and Palomar 12 are too far south for my latitude. Whiting 1 has been on the to-do list for some time now but it is such a poor object I\'ve assigned it a low priority. Because of this it just doesn\'t get taken.

It made my list because globulars in this part of the sky are rare though M 53 and NGC 5053 are two well-known globulars in Coma Berenices that are much closer to us. It also made the list because it is in the original Herschel 400 list. My entry from April 20, 1985 with my 10\" f/5 reads: \" Small, compact globular. Grainy but not resolved. Slightly brighter toward the center.\"

I had this one on my to-do list twice. Once under NGC 4147 and once under a two object combination of it and the flat galaxy FGC 1379. Somehow I gave the single object a higher priority and ended up centering on the globular rather than between these two. Thus the very interesting FGC 1379 was out of the field. A blunder on my part. Jim Shudder didn\'t make my mistake so you can see what I missed at: http://www.pbase.com/jshuder/image/123936737/original . It was Jim\'s image that showed me I could put both in one field then I didn\'t do it.

I\'ve prepared an annotated image which includes three asteroids. One moving very rapidly and two others moving quite slowly. Interestingly all were moving downward one quite rapidly. So much so it was quite faint as its light hit a pixel for less than a minute while the others were on the same pixel for 3 or 4 minutes making them appear much brighter for their magnitude. Also in the annotated image is a quasar marked with a question mark. This is because NED lists it as a star or point source object and lastly as a quasar. Photographic redshifts can be fooled into showing a very wrong value. Apparently, NED feels that might have happened here when they don\'t even consider it a candidate quasar. One of those is also in the image. Its redshift is spectroscopically determined and it is quite blue so I have a rather high degree of confidence it is a true quasar. There are several galaxy clusters. Two with a bright cluster galaxy that I\'ve used to mark its location and a third without such a galaxy. I just point to the pixel that marks its position at NED though with a diameter of 10 minutes of arc it is hard to say what is a member of the cluster and what isn\'t as nothing with the right redshift value is in the area. It is ZwCl 1206.9+1842 for those wishing to look it up and try to identify what faint fuzzies in my image belong to it. 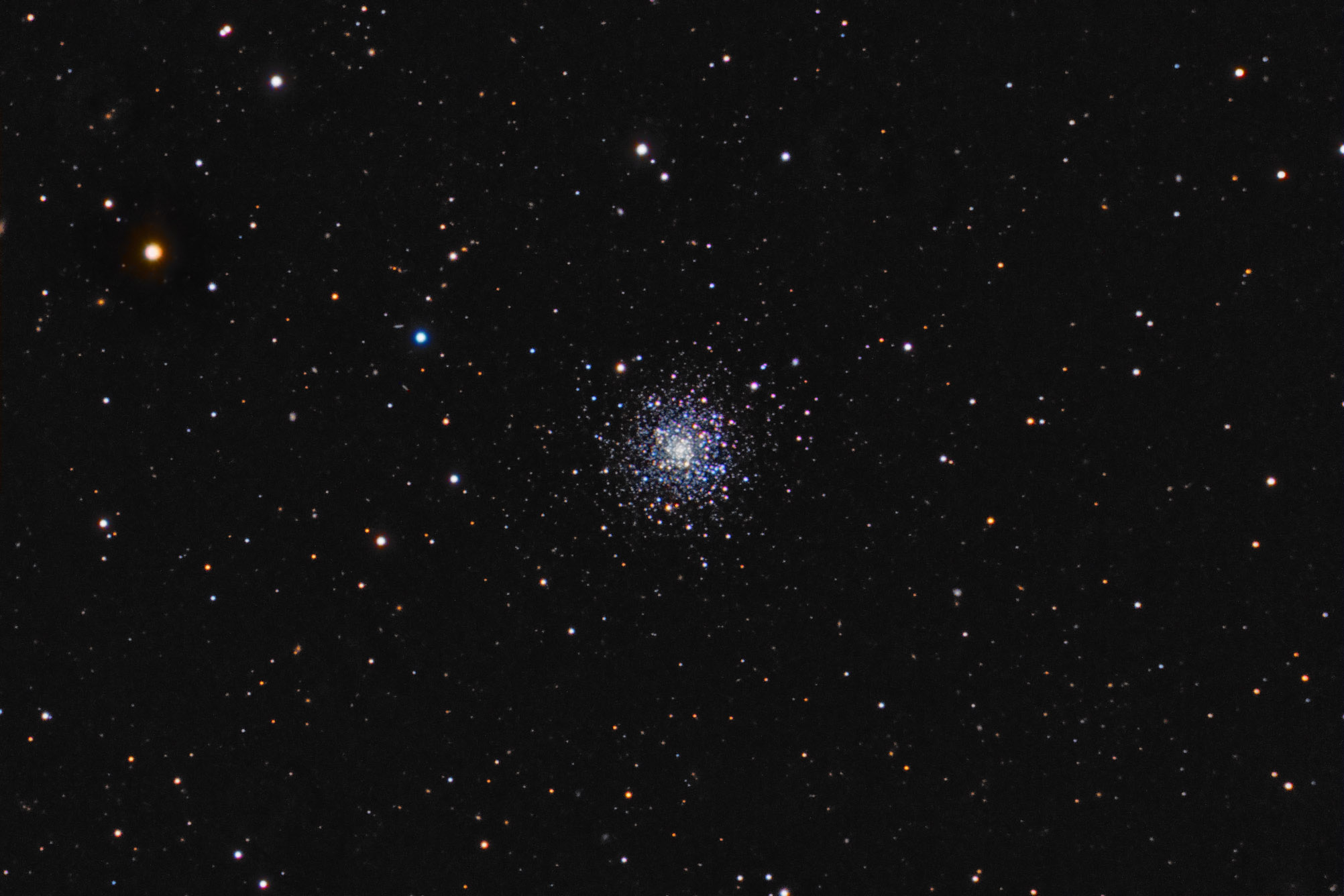 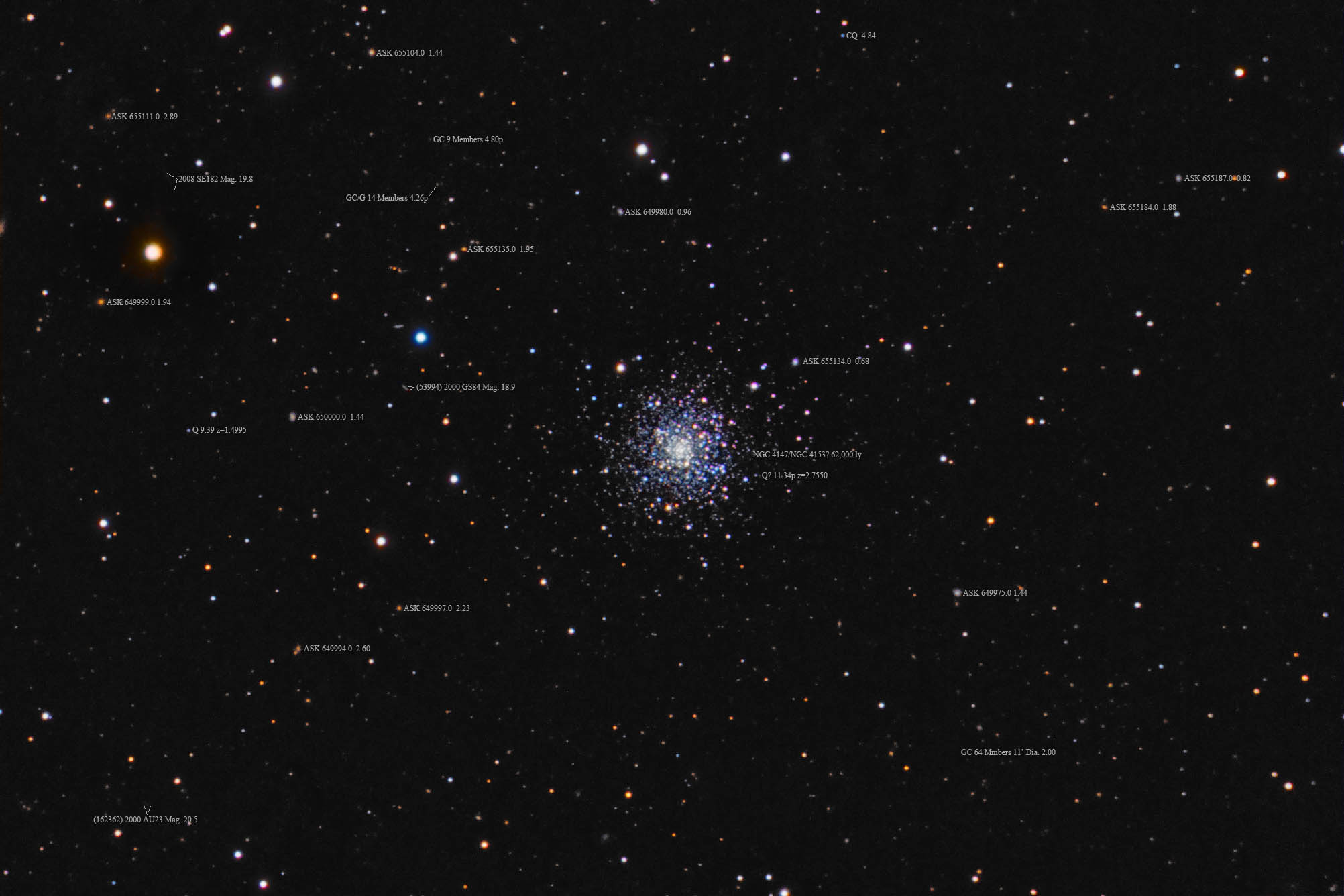