This field was taken not because it is rarely seen but because of the Herschel 400 object, NGC 4216 and it is a great field. NGC 4216 is an Sab(s)b: galaxy with HII emission and LINER properties indicating an active nucleus. It is considered a member of the Virgo Cluster of Galaxies. It\'s distance, however, is rather vague. Virgo Cluster galaxies have large orbital velocities making cosmological redshift useless as some of these values range from way too high a redshift for the accepted 50 to 60 million light-year distance to even a few that are blue shifted. NGC 4216 is listed by APOD at 40 million light-years. Several sources say it is near the center of the cluster but that is thought to be some 50 to 60 million light-years distant. Non-redshift values at NED are all greater than the 40 million light-year figure. To me its resolution both in my image and others is more akin to a 50 to 60 million light-year distance though this galaxy is considered rather anemic in that star formation is low and its supply of HI is also low. Note its rather red color indicating few young stars even far out in the arms. Still, I\'ll bow to the experts and say it is 40 million light-years distant. That makes it about 100,000 light-years in size. It has a close companion with similar redshift, VCC 0165. It has an odd curving plume to the northwest indicating it is interacting with NGC 4216.

As I stacked the frames an odd faint spike of light came in at an odd angle. Straight as an arrow it had to be a reflection but those come in perpendicular to the edge, not at an angle. Then my sleeping brain (it was 1 a.m.) finally woke up. A quick check turned up Ken Crawford\'s APOD showing a huge looping star stream. http://imagingdeepsky.com/Galaxies/NGC4216/NGC4216.htm Also this version http://www.cloudynights.com/topic/411099-the-galaxies-star-streams-ngc4216-and-ngc4449 Both of these used many many hours and I\'d only used 40 minutes of luminance. Still, I picked up some of it. Then I looked at the log entry my system makes and saw I had planned on at least 4 rounds of data over 4 nights but the system got clouded out and never completed it. That\'s the problem with processing months later, I forget things like this.

NGC 4216 is the only galaxy in this field that is in either Herschel 400 list, being in the original. My comment from April 20, 1985 using my 10\" f/5 on an only fair night at 100x reads simply \"Large, nearly edge-on galaxy with a bright center.\" Usually, I wrote more than that. Humidity was high and transparency low according to my notes. William Herschel found it the night of April 17, 1784. Later Arnold Schwassmann found it on September 14, 1900. That got the IC3064 listing.

The other two NGC galaxies in the image are also Herschel discoveries. NGC 4206 on the same night as NGC 4216 and NGC 5222 a few days earlier on April 8, 1784. You might wonder how he could find 4222 and miss 4216 a much bigger and brighter galaxy. His scope was extremely difficult to use compared to what we are used to. He\'d point it to a declination and record what he saw drift by. A clock gave him the RA as it crossed the center and the declination of the center of his field was known to make declination easier to estimate. Also, his field of view was tiny compared to what we are used to. NGC 4222 was just too far north and likely near the southern edge of his field that pass. The other two would be caught when he could map the strip one field south a few nights later.

NGC 4206 is a flat galaxy meeting the lesser qualifications of the 2 micron flat galaxy catalog. It is a Sa(s)bc: galaxy with a LINER active core. Redshift puts it about 48 million light-years distant while non-redshift measurements place it further away. So is it close to 4216 or not? I have no idea. Assuming it is 50 million light-years away it is about 90,000 light-years in diameter.

NGC 4222 has a similar redshift as NGC 4216 and a wide range of non-redshift values putting it more distant than NGC 4216. Still, it\'s similar redshift may indicate it is gravitationally linked to 4216 so I\'m going to assume it too is about 40 million light-years distant. That makes it the smallest of the three at 40,000 light-years across. It is flatter than 4222 and thus makes the Flat Galaxy Catalog. Seen nearly edge on it is obvious it has only a slight hint of a central bulge. It is listed as an Sc spiral with HII emission.

There is often a 4th galaxy considered part of this group, IC 771 which is listed as a member of the Virgo Cluster Catalog as VCC 142. But its redshift puts it some 280 million light-years distant. While Virgo Cluster Galaxies can have redshifts well beyond their distance this is way too far out of line. No way it is actually a member of the cluster. It is a respectable 60,000 light-years across and is listed as a barred spiral. It was discovered by Rudolf Ferdinand Spitaler on April 1, 1891 using the 68cm refractor at Wien University Observatory. Now known as the University of Vienna and Vienna Observatory. The annotated image shows many other galaxies listed as members of the cluster with even larger redshifts indicating many VCC galaxies are not really members of the cluster but background galaxies. Several of the annotated VCC galaxies carried a second entry in NED without the VCC label. Only one of these is noted. Usually, the non-VCC entry had very vague coordinates, sometimes with an over 4 degree error circle. The one that did agree within a few seconds of arc is listed in the annotated image, otherwise, even though the coordinates match the huge error circle and different redshift value indicated this is only a guess for which galaxy is meant. Most originated from radio galaxy catalogs with a wide beam and thus poor positional information.

One very faint asteroid is marked in the lower right corner. Why I off centered my target galaxy I don\'t know. Since I was trying for the plume caused by VCC 165 being ripped apart I\'d have expected I\'d have moved it east rather than west. Maybe I was confused which side of the galaxy it was on. Trying to remember back to April without any note on this fails my memory any more. 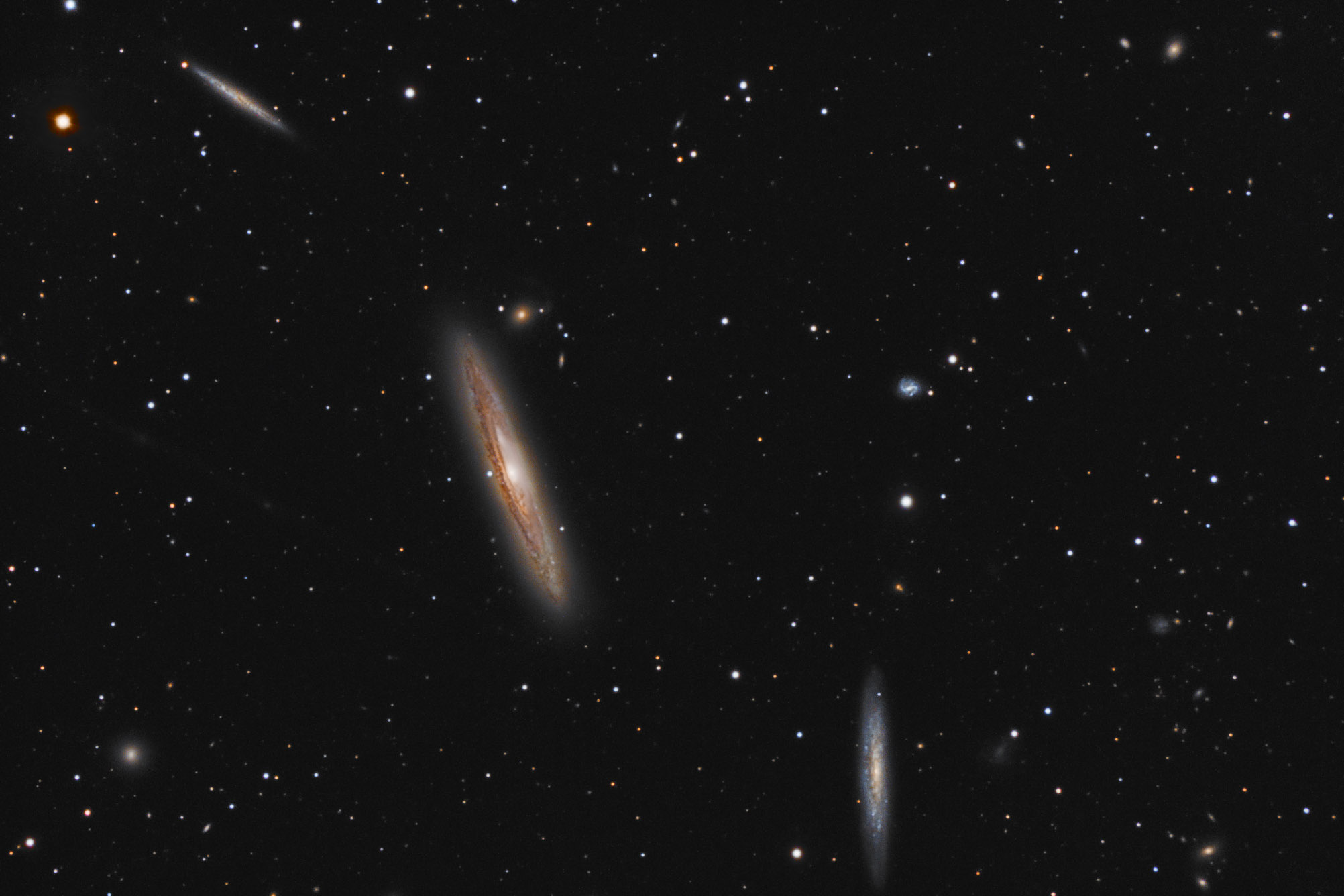 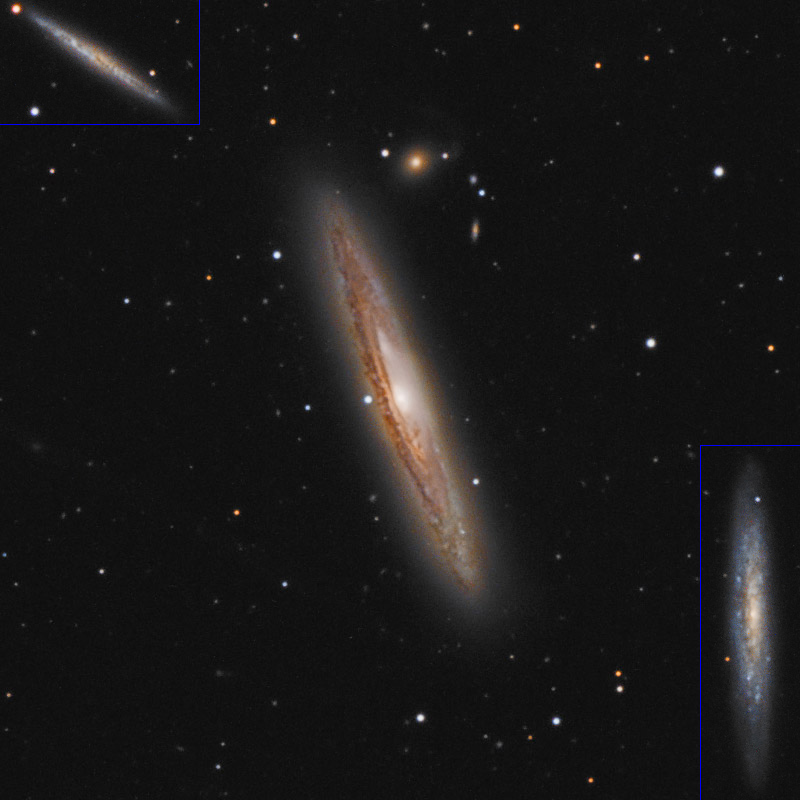 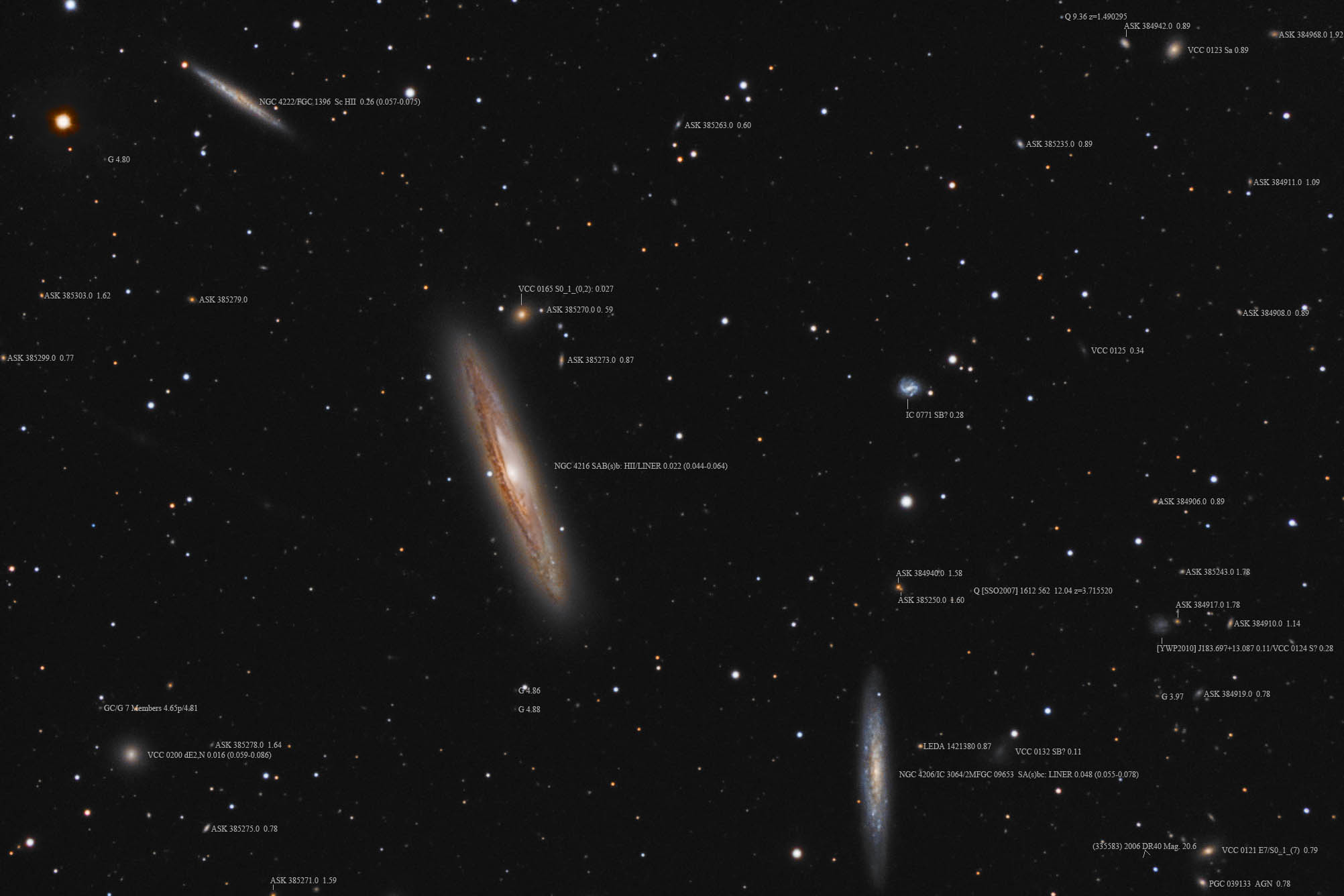