NGC 4217 is an edge on galaxy often seen in wide field shots of M 106 but deserving of being imaged for itself though this is rarely done for some reason. It is classified at NED as SAb with HII emission. I didn\'t bring out any of these in the RGB image. At first glance, I thought it looked a bit twisted as there\'s more to see on the west side than the eastern half. But I think this is due to a spiral arm coming around toward us on the western side that is going away from us on the eastern side. Thus the eastern one is mostly hidden by the galaxy itself. But there may be a twist as well. The galaxy was discovered by William Herschel on April 10, 1788. It is in Canes Venatici and about 57 million light-years distant by redshift at 64 million distant by a couple of Tully Fisher measurements. Since it may be a member of the Virgo cluster I\'ll sort of average the two and call it 60 million light-years. That puts its faint outer reaches at some 125,000 light-years across. Likely its stars extend much further as there\'s really no edge to a galaxy, the stars just get less and less dense without any clear end. Using the brighter portion it is about 100,000 light-years across. While imaged with M 106 it is nearly 3 times more distant than its famous neighbor so they are not related, just they share about the same line of sight as seen from earth It is in the Herschel 2 observing program but not one I\'ve logged visually for some reason. The nearby bright stars do make this one a bear to process as they sent lots of light flying around.

NGC 4226 is the other NGC galaxy in the image. It is not a companion of either M 106 or NGC 4217 as it lies some 340 million light-years distant and is part of the LDCE 0877 galaxy group. Thus there are several other galaxies at that distance in my image. Thanks to its much greater distance it is the largest galaxy in the image with the bright edge measured to a diameter of 128,000 light-years, more than the faintest extent of NGC 4217. It wasn\'t seen by William Herschel when he recorded 4217 but was discovered on March 19, 1828, nearly 40 years later by his son John Herschel. It is classed as Sa pec? by most sources. The NGC project says S:... whatever those dots mean. The colon is about the same as a question mark. It has a close, nearly starlike in my image, companion with almost exactly the same redshift.

The annotated image shows all galaxies NED had listed as galaxies that had a redshift distance estimate. Most interesting of these to me is BTS 109 a dwarf elliptical galaxy with a redshift that likely makes it a companion of M 106. I measure its diameter at only 2,500 light-years. That is indeed a dwarf galaxy and a faint one as well. It\'s near the eastern (left) edge of my image which puts it about half way between NGC 4217 and M 106.

This was taken the only good night in January though I did capture a few photons of 5 objects a week earlier through questionable skies. Unfortunately, a bright moon rising and clouds moving in prevented me from getting but one frame of red and green. Still, the night was good enough that that was sufficient. Fortunately, I got lucky and there were no satellite trails in the single red and green frames. 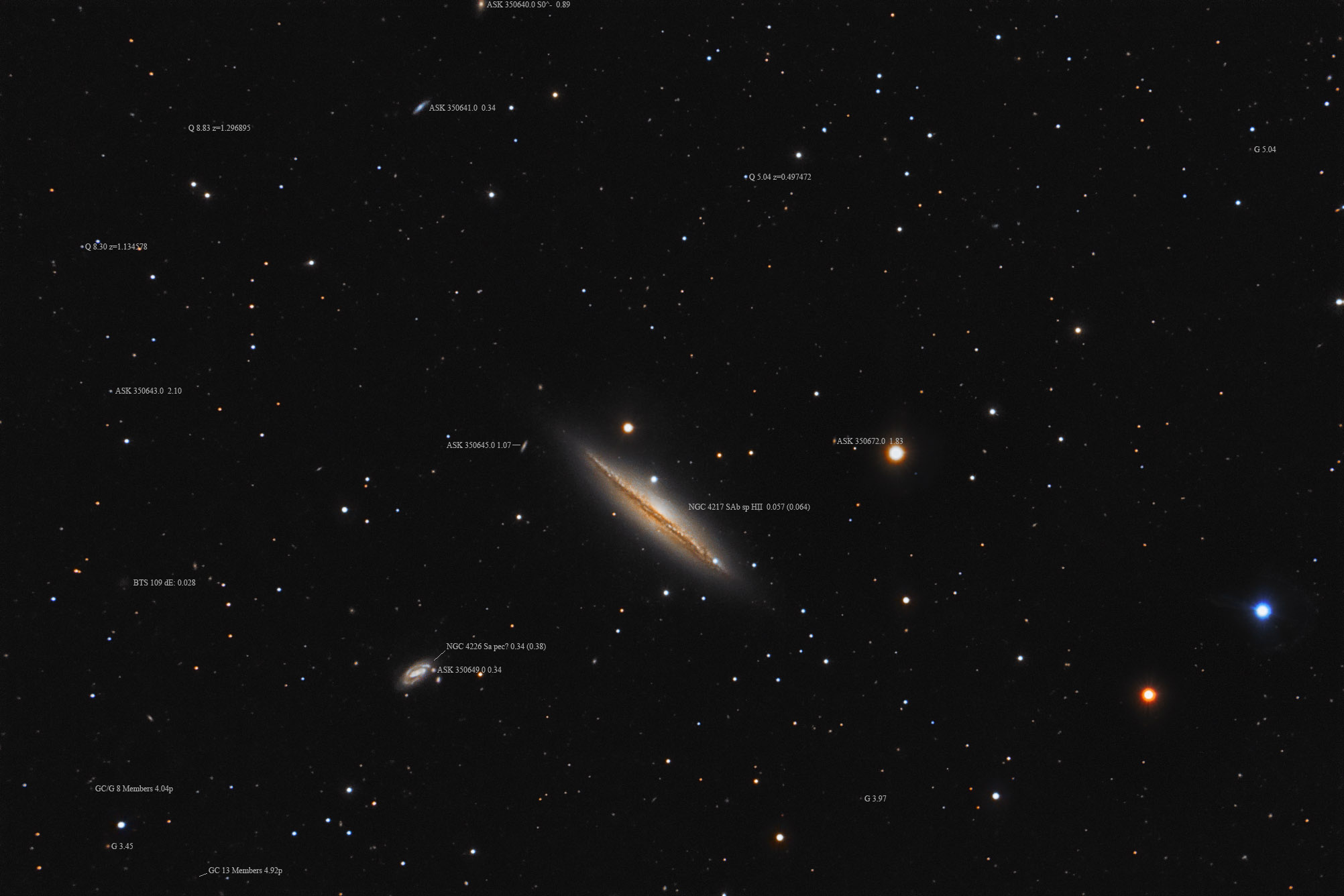 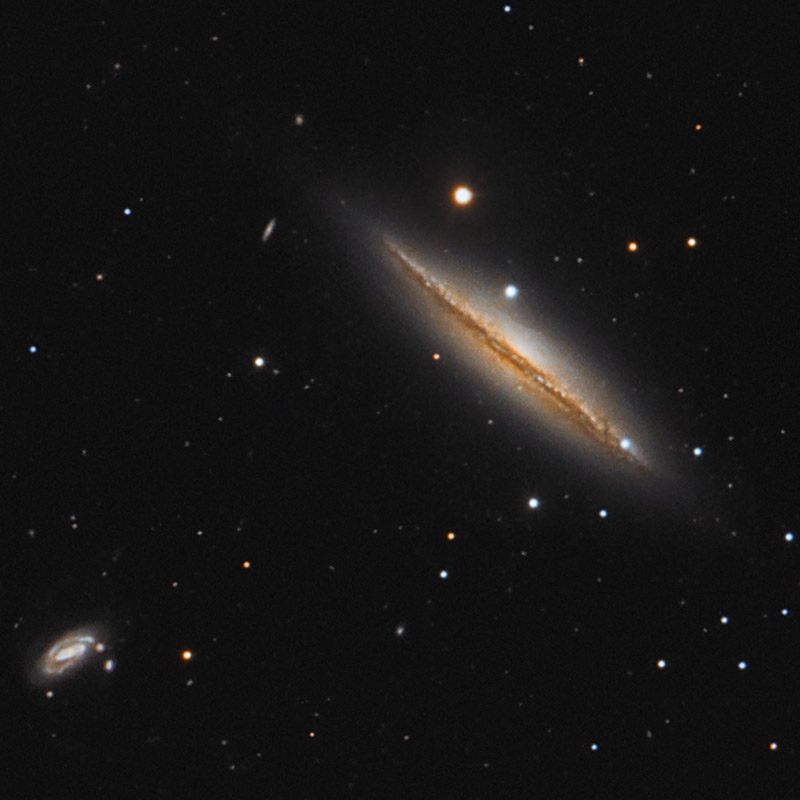 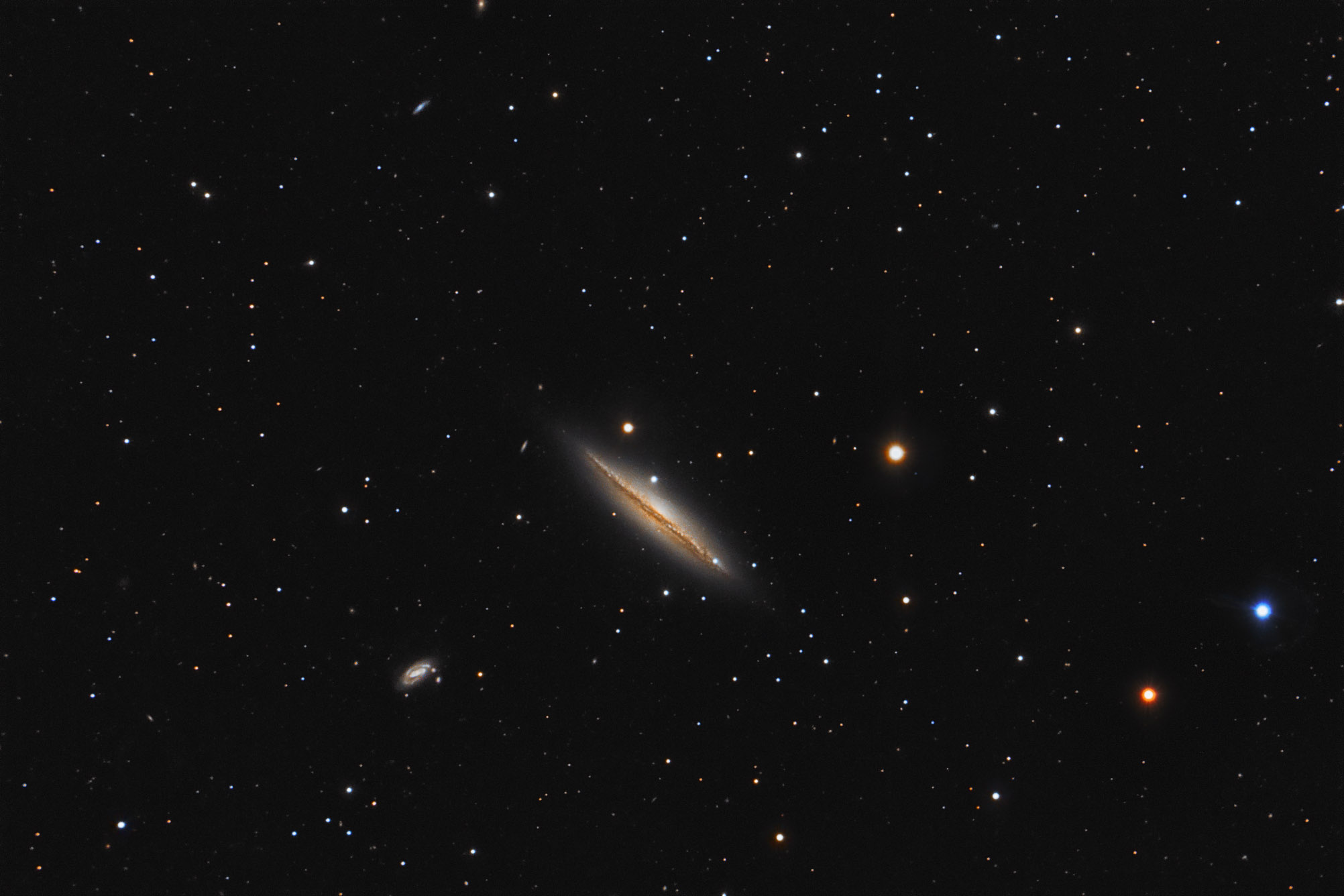