NGC 4236 is a galaxy in the M81 group. Spitzer/Hubble has measured the distance at 11.5 million lightyears based on the brightness of several 19th magnitude blue stars in the galaxy. They show in my shot but I can\'t easily point them out. This is a really faint galaxy. Its apparent size is about the same as M81 but it is far fainter. M81 can be seen in binoculars. NGC 4236 is a difficult object in any size telescope showing only as a faint smudge and then only the core region is seen. As you see in the photo it is very blue. That means there\'s a heck of a lot of star formation going on in it or has gone on in the recent past. Yet even these bright stars can\'t make it very bright. One theory is it is heavily obscured by dust in our own galaxy. Very long exposures with wide field systems do show a huge dust cloud in our galaxy in this direction. If I ever get wide field capability I\'d like to try and photograph it. Still, it is very thin and doesn\'t seem to redden anything behind it like a cloud thick enough to obscure much would. So its faintness is still a bit of a puzzle.

(Edit: it was discovered on April 6, 1793. I expected it to be in the original H400 program but somehow it didn\'t make the cut. It is in the second program but unfortunately, my notes from that were lost in the move to Minnesota from Nebraska in 2005.)

It has one companion galaxy Holmberg 357b. That is the brightest small galaxy in the shot. It is to the left of NGC 4236 toward the top, right of a rather bright star. It\'s the biggest and brightest galaxy in the shot besides 4236 itself. Sort of a very small Magellanic Cloud.

A large number of background \"stars\" in this image are really galaxies. If seeing had been better it would be easier to separate them but when you see a fuzzy star compared to a fainter one that isn\'t as fuzzy, the former is a galaxy. It\'s quite possible there are more galaxies in this shot that stars. Another reason I don\'t buy the \"heavily obscured\" explanation for why this galaxy is so faint.

Edit: This is a 2008 image before I researched the field so there\'s no data on the background galaxies nor was I annotating the images back then. While I did a minor reprocess of the TIF image from 2008 this one could use either a reshoot on a better night or a full reprocessing from the original data. My comments say, \"Clouds rolled in about the time the moon was getting out of the way. Unfortunately, seeing wasn\'t very good as the air temp was very warm by day and cooling rapidly by night. That ruins my ability to capture a really clear image. Being very high in declination my window to photograph this one is limited so I used two nights, neither were any good. But we\'ll go with what I was able to get. 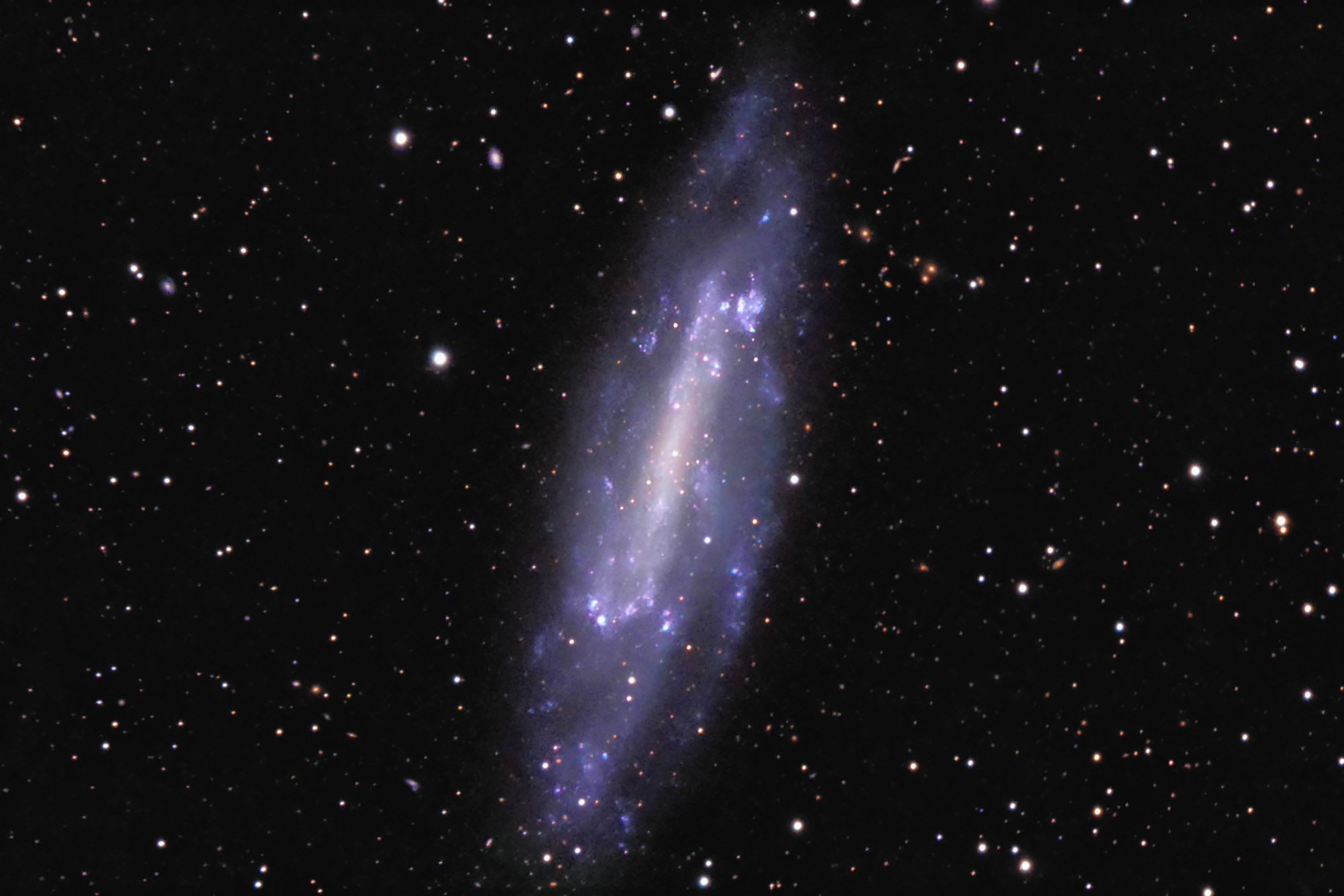