NGC 4242 is a very low surface brightness spiral galaxy in Canes Venatici about 1.75 degrees south of much better known M106. It may, in fact, be related to M106 as its distance is 33 million light-years based on cosmological redshift and 22 million light-years by an average of various non-redshift measurements that are likely more accurate. This is about the same as the 23.5 million light-year distance often cited for M106. Assuming it is a companion they are a minimum of only about 700,000 light-years apart much closer than we are to M32 (for now that is). In its center where I\'d expect the core to be there is a starlike object. It\'s PSF is similar to a star indicating whatever it is unresolved at my seeing. Is it the core or is it a star in our galaxy that happens to be perfectly aligned?

Fortunately, the HST has taken an image of the core and it seems to be just a field star. It is classified as SAB(s)dm. It has little, if any, spiral structure. What passes for arms seem more radial than spiral and are mostly just star clouds and star clusters. While it is very blue little dust is seen so this may be its last gasp at star formation though radio observations show a HI disk that\'s 3 minutes across while the galaxy is 5 minutes on its major axis. That makes its visual size only about 33,000 light-years, so it isn\'t a large galaxy.

In the annotated image I did include three quasar candidates. NED\'s primary designation for these, however, is just a star. Only photographic redshifts are available for these and likely the cause of both their extreme distance estimates as well as possible quasar status. Watching these almost always turn into confirmed stars rather than quasars I tend not to include them in my annotations. Several known quasars with accurate spectroscopic redshifts are also noted in the image. Arp seemed to think these were nearby objects ejected from active galaxies. NGC 4242 isn\'t active in the way he seemed to think caused quasars so I wonder when he made of all them around this galaxy?

The annotated image shows quite a few galaxies at about 920 million light-years. While NED indicates the 4 south of NGC 4242 are the SDSSCGB 39935 cluster this leaves out the others scattered further out.

Seeing turned lousy during the collection of color data leading to some nasty color issues with halos of vivid red, green and blue around the brighter stars, especially those that are nearly white which are rather common in the image. I had a heck of a time dealing with these flares and halos. Seeing hit 6\" at times compared to the less than 3\" for the luminance data. I probably should have reshot the color but didn\'t realize this was a problem until I recently went to process it and it was lost in the sun\'s glare. I managed to process out all but a hint of the problem but it took way too much time. If it hadn\'t have been such an interesting galaxy I\'d likely have reshot it next year. 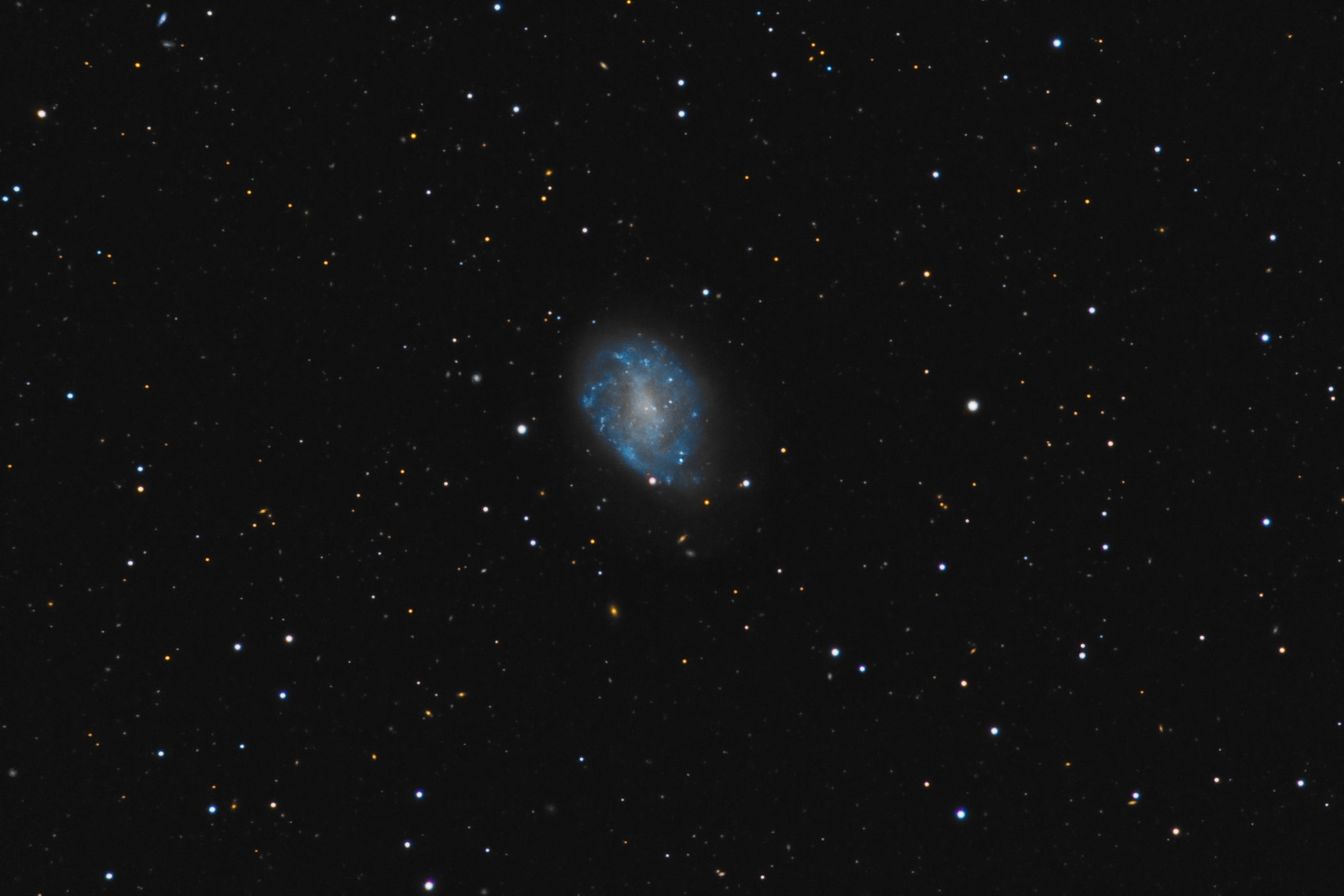 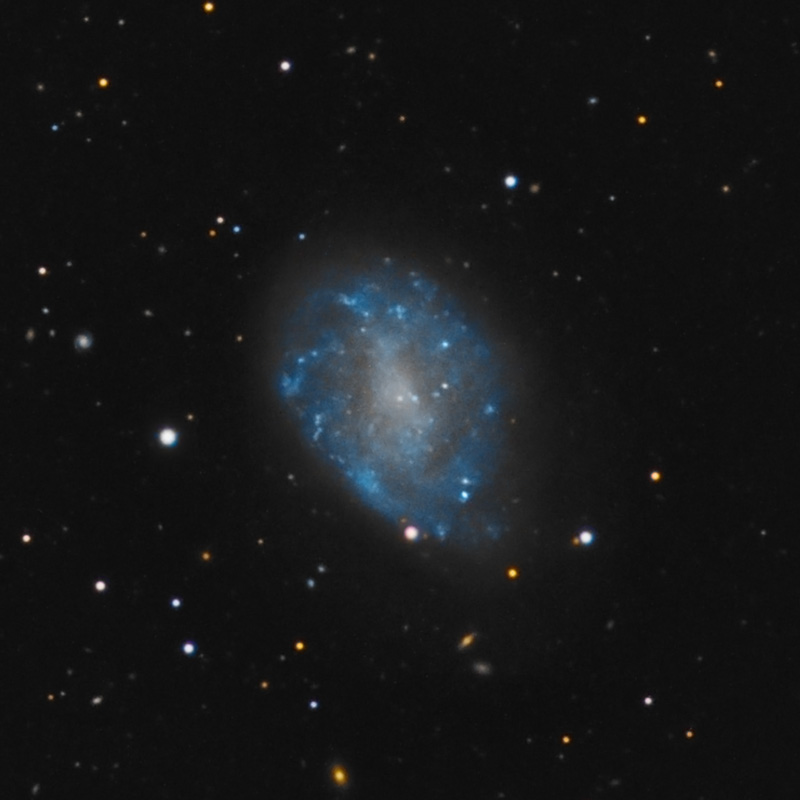 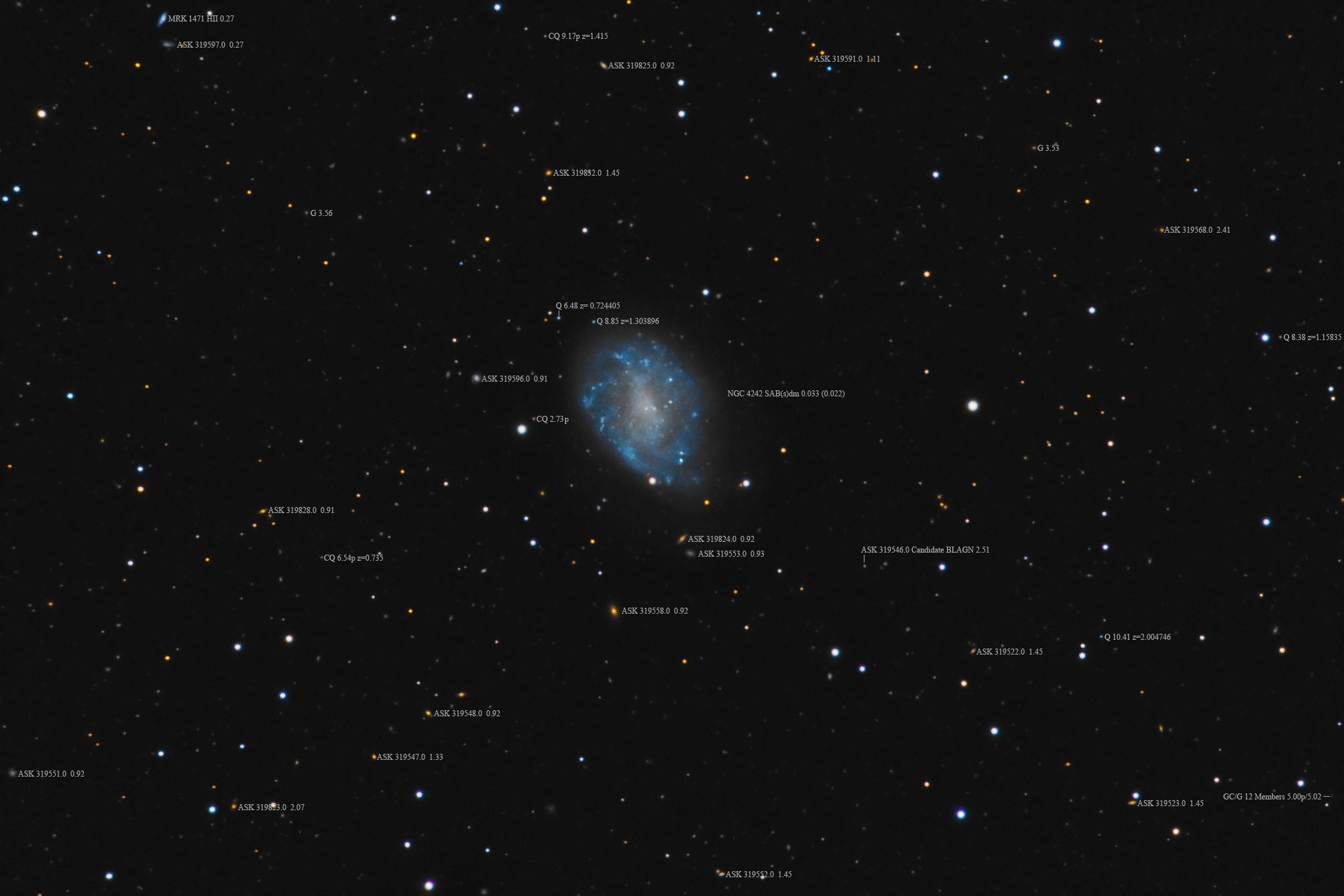