Arp put it in his classification for Group Character: Connected Arms. I don\'t see how this pair varies from many other interacting pairs he put under other categories in his atlas. NGC 4485 to the north is classified as IB(s)m pec while NGC 4490 is classified at NED as SB(s)d pec. The pair was discovered by William Herschel on January 14, 1788. Both are in the original Herschel 400 observing program as two individual listings. My notes from April 28, 1984 with a 12.5\" f/6 telescope at up to 150x on an excellent night in the New Mexican desert read: \"Small and dim with no detail. In the same field with much larger and brighter NGC 4490. A Mutt and Jeff pair. Appears slightly elongated. Hard to judge this one as my eye keeps jumping to NGC 4490.\" The entry for NGC 4490 reads: Bright with stellar nucleus. Some detail seen in arms. Appears to be a highly tilted spiral. A bit more tilted than M31. A fine object especially when paired with NGC 4485. Seems about 9.5 magnitude, brighter than Burnham says.\" It\'s obvious I\'d not seen anything on this pair before looking at it as I thought I was looking at a classic spiral rather than a messed up one with no defined arms.

Our galaxy is very over due for a naked eye super nova event. Not one has blown in our galaxy, that we could see that is, since the invention of the telescope much to astronomer\'s dismay. We find them all the time in very distant galaxies where they are faint and difficult to study. So when one blows in a near by galaxy it causes lots of observatories to drop what they were doing and get their instruments trained on the exploding star. One did so in NGC 4490 shining \"brightly\". It blew in 2008 and is known as 2008ax being discovered on March 3 by Link Observatories automated supernova search telescope and by Japanese amateur Koichi Itagaki who has discovered over 100 supernova. This one was bright enough to be seen in amateur telescopes of 8\" or larger size when viewed from a very dark location. It is shining at magnitude 13.2 as best as I can measure it against the background of the galaxy in my image.

The distance to NGC 4490 is a bit uncertain. I\'ve seen estimates from 35 to 50 million light years. Maybe they\'ll have to pin it down a bit closer to get meaningful results from the study of this supernova. This is a very blue galaxy in which star birth has been going on at an extremely high rate due to interaction with a companion galaxy NGC 4485 also in the image. Many of these new stars are super-massive blue giants that are very short lived. Lasting only a few million years before they blow up. So it isn\'t at all surprising to find a supernova in this galaxy. My super nova image was taken in strong moonlight and had very limited color data due to clouds and lousy seeing. But it does show the supernova when it was about 13.5 magnitude. It apparently brightened a bit after my image was taken. Of course all this really happened at least 35 million years ago so this is old news to residents of the galaxy, assuming they could survive living in such an active galaxy with the intense radiation caused by its star birth condition. Be very glad we don\'t live in such a galaxy. The pink regions easily seen in my image are due to HII emission from areas where star birth is still going on. My lousy seeing and limited color data makes them hard to see in the super nova image. 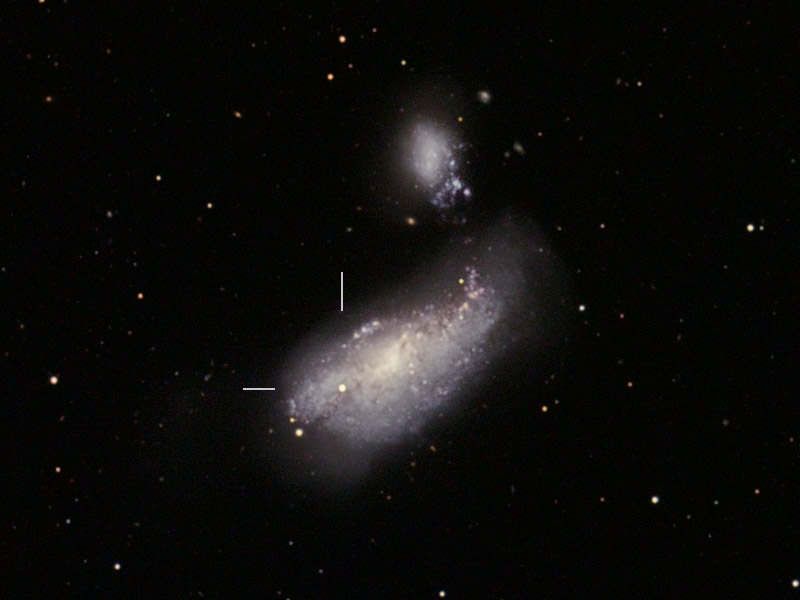 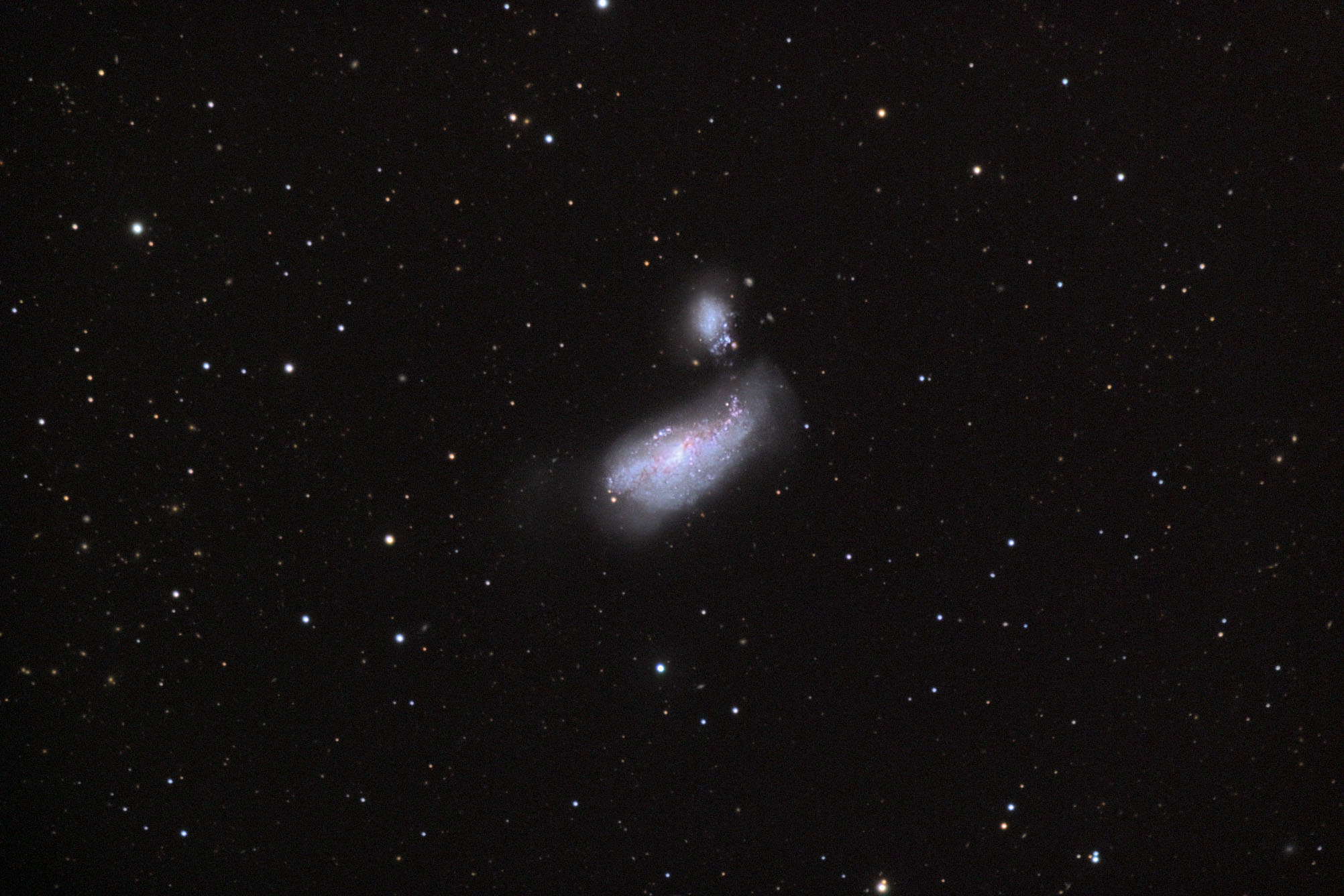