NGC 4522 is a near edge on spiral in the Virgo Cluster. It resides in the constellation of Virgo as well (not all the cluster does) and is thought to be about 60 million light-years distant. Though its redshift would put it about twice that distance. This difference indicates it is really moving rapidly through the Virgo Cluster. So fast that its dust and gas is being stripped from it. Some of this is visible in my image. Note the upper right side of the galaxy appears missing. IR images show it is there but hidden by dust and gas being blown up and to the right. Some faint star clouds are visible rising above the disk area that are made up of new stars formed in this dust as it is compressed by the ram pressure of its high speed run through the cluster\'s intergalactic medium. You can read all about it and see the HST image of the galaxy at: http://www.spacetelescope.org/images/heic0911b/ .

What they don\'t mention is that it appears to have a double core. Even the HST image which resolves its stars shows an apparent double core. I suppose that could be due to dust obscuring the central part of the core giving the illusion it is double. There certainly is a lot of gas and dust in that area. I found nothing on this, however.

It has several companions in my image, IC 3715 an irregular dwarf to its east and UGCA 284 to the west, an elliptical galaxy. Then there\'s VCC 1496 a Dwarf E5 galaxy of low surface brightness to the southwest and VCC 1579 a bright S0 galaxy in the lower left corner. Several others are just outside my field.

There\'s a very tight pair of red galaxies to the upper right of NGC 4522; [WLH2009] 0550. It has two cores apparently in the same galactic halo. One has a redshift that puts it 1.37 billion light-years distant while the other as a \"predicted\" distance of also 1.37 billion light-years. This would seem to indicate these are two interacting galaxies or they are far enough apart they aren\'t interacting but are just along the same sight line giving that illusion. I see no tidal plumes to indicate interaction.

Well to the west of NGC 4522 and a bit south is the galaxy SDSS J123253.04+090703.0. It has a bright, near starlike core with two faint extensions on either side that are somewhat warped and get fatter as their distance from the core increases. Are the tidal plumes? I could find virtually nothing on this galaxy, unfortunately, not even a redshift.

Below NGC 4522 and a bit west is a rather nice galaxy cluster made up of both blue and gold members. I found it in two catalogs, one listing 19 members and an estimated distance of 3.43 billion light-years (NSCS J123335+090311) and another listing 15 members and a photographic redshift putting it 2.87 billion light-years away (WHL J123334.9+090304). Which is the more accurate I don\'t know. Though I\'ve found the WHL entries usually more reliable.

Then there\'s a galaxy group (GG) of 4 or 6 galaxies to the southeast of NGC 4522. 5 members have a redshift measurement of which three say 1.18 billion light-years, another 1.16 billion light-years and oddly the one marked as the Bright Cluster Galaxy at 1.56 billion light-years. Though its distance was a guess based on the Friend of a Friend method. I don\'t pretend to understand this concept which is quite confusing to me considering its distance estimate is very different from the others, including another FoF estimate. I\'ve drawn a line to where the galaxy group I\'ve listed puts its center though that position is +/- 15 seconds of arc. Oddly its distance is greater than 4 of the members with an estimate though well below that of the BCG.

It appears to me that there are more faint fuzzy galaxies in the image than there are field stars from our galaxy. Though seeing wasn\'t all that great so that might fuzz some of the stars into galaxy like fuzz balls. 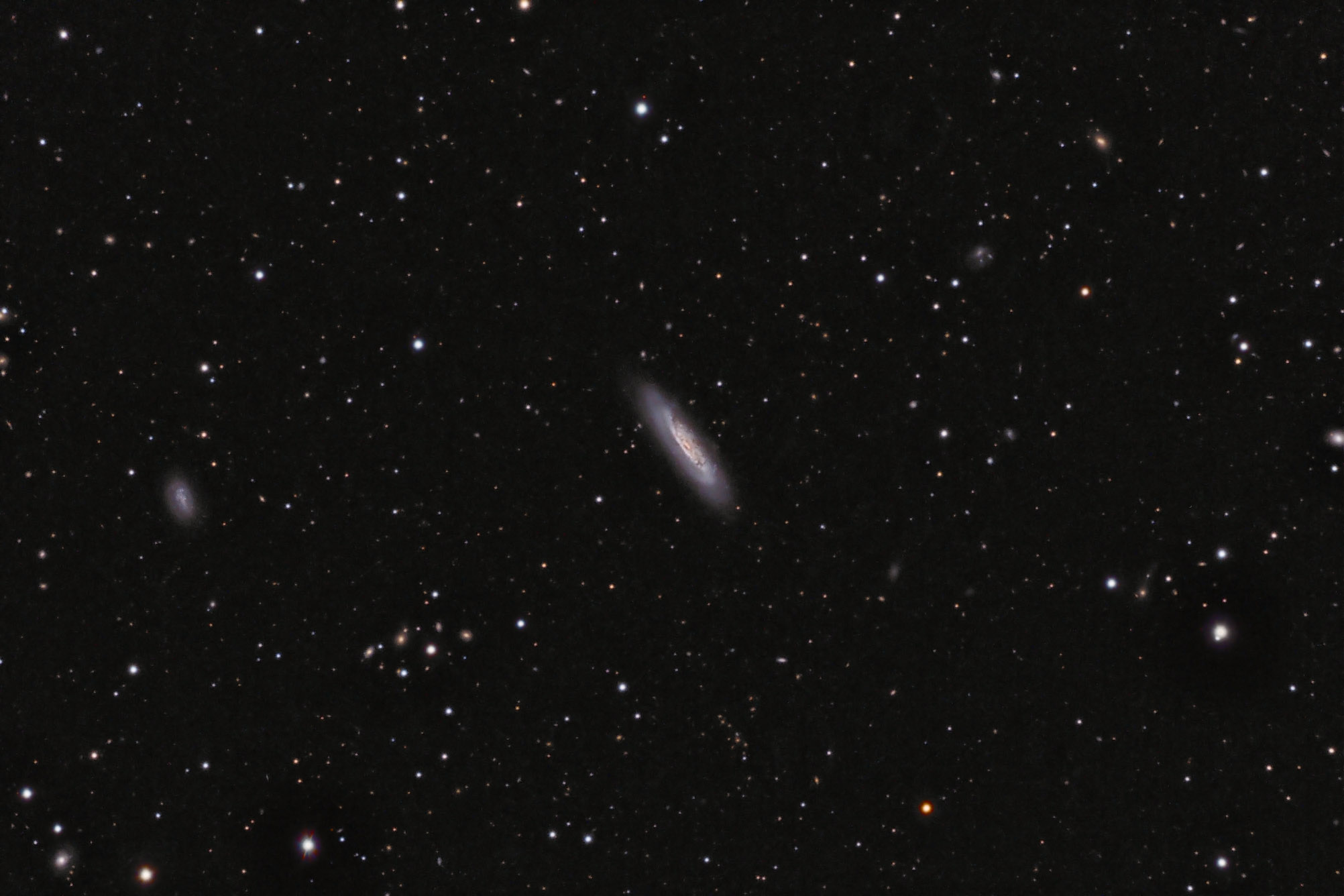 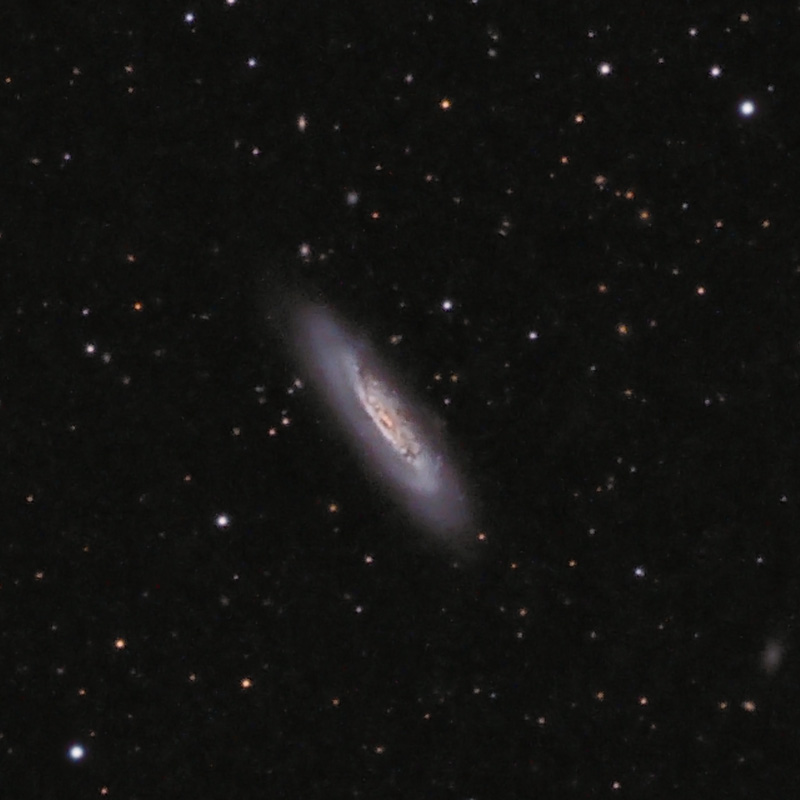 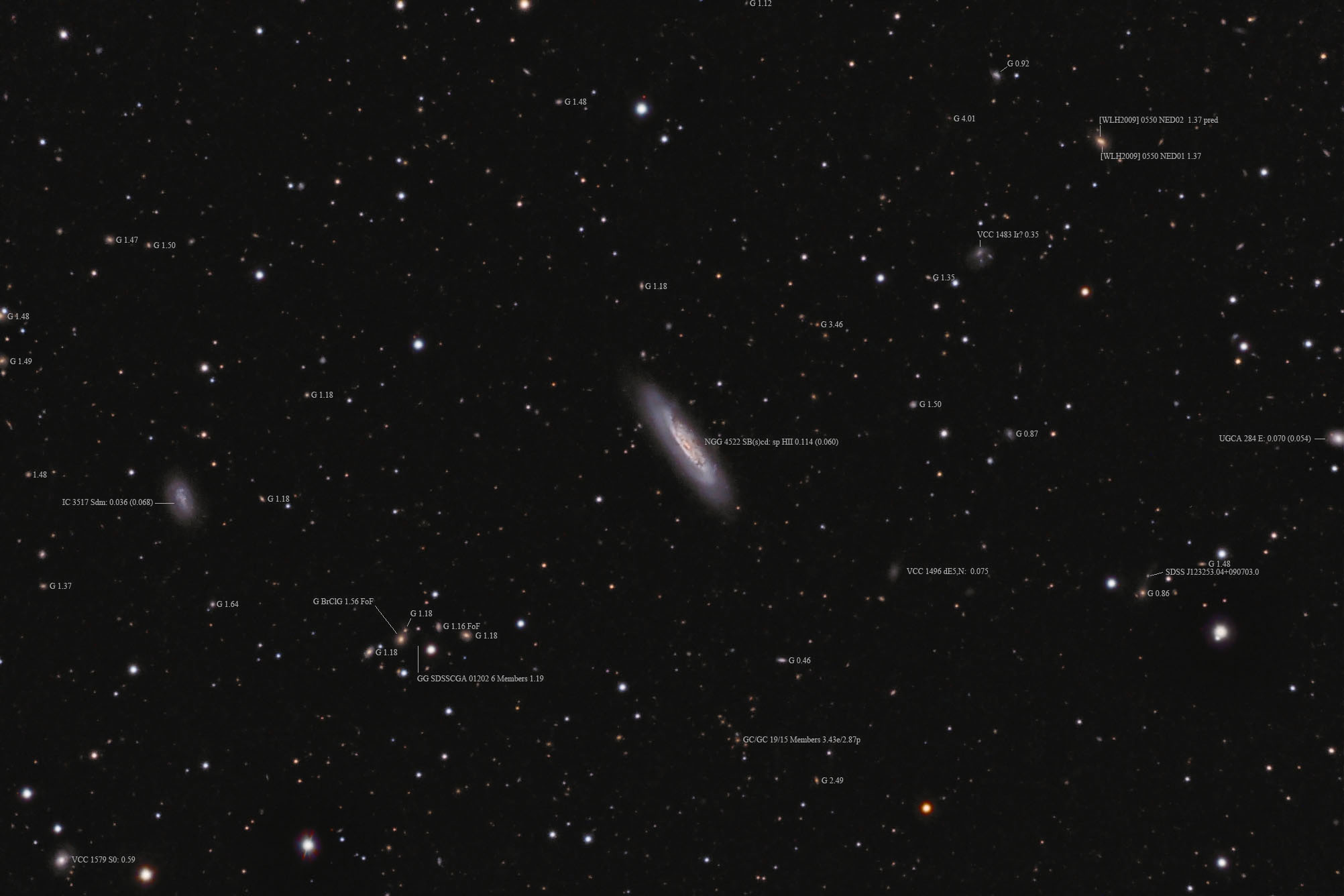