While nearly all my images are oriented north up. This galaxy looked \"upside down\" to me so I\'m breaking my rule and displaying this field with south at the top.

The galaxy was discovered by William Herschel on February 23, 1784. It is in the original Herschel 400 observing program. My notes from April 23, 1985, under moonlight with my 10\" f/5 at 50x reads: \"Large, oval galaxy of even brightness but otherwise featureless. In the same low power field with much more interesting NGC 4536.\" While I\'ve taken 4536 and the two are separated by about half a degree my field is only about 11 minutes from center to top or bottom so there\'s no overlap between the two making it impossible to mosaic the two. My image of 4536 is at http://www.spacebanter.com/attachment.php?attachmentid=5363&d=1414649090 .

It is classified by NED as Sab(s)bc; HII LINER. New research on LINER galaxies indicates many may be LIERs rather than LINERs. It was thought they were powered black holes nearing starvation so greatly reducing the ionization they could create throughout the galaxy. The N standing for Nuclear when it was thought the radiation came from there. Now it appears many are powered by a scattering of white dwarfs through the disk rather than an active nucleus. See http://www.sdss.org/releases/proof-that-some-galaxies-are-liers/ for more on this. (Edit: Many of the texts with images at this site mistakenly use the wrong idea about LINER galaxies being caused by an active black hole. Now it is shown this may be very wrong and white dwarfs are the cause. Keep that in mind when encountering LINER galaxies)

Also over these years, I\'ve had galaxies in my image classified with (f) such as Sb(f). I couldn\'t find what this meant so asked a few pros I do photometric work for on AGN\'s. They didn\'t know for sure. One suggested it meant they had an overabundance of F stars and I used that in a couple of my annotations. Finally one got back to me with the right explanation. Or at least a right explanation. It can mean the galaxy is seen virtually edge on (not that it is flat enough to make any of the flat galaxy catalogs). One such galaxy appears in this image to the right of NGC 4527 and is in the 2 micron flat galaxy catalog. Now I have to figure out which of my text files has this written up incorrectly and verify that those are seen edge on. (Edit: if a reader finds which have this error please let me know so I can fix them.) Here\'s the link I was sent: http://arxiv.org/pdf/astro-ph/0509294.pdf

This image contains an unusual number of objects listed as UvES. These, NED considers as quasar candidates due to their large redshift and color shift as recorded in the color filters of the Sloan survey. Since no actual spectroscopic redshift has been determined the identification as a quasar is subject to change. Only those NED listed as being quasar candidates are shown in my annotated image.

There were several asteroids in the image that I\'d normally be able to show but only one does appear and then only barely. This is again due to my lousy sky conditions of late limiting my ability to go deep. You may notice a break in the trail. This is because my system shut down for a while to wait for better skies then started in again 20 minutes later creating this gap. I\'m beginning to wonder if normal transparency will ever return. Didn\'t help that on about the only really transparent night last May an aurora gave me a sky brighter than I get within 45 degrees of a full moon! Then, forest fire smoke from nearby and distant fires made imaging impossible. One of those was only 15 miles away thanks to our super dry spring. Seems I can\'t win. 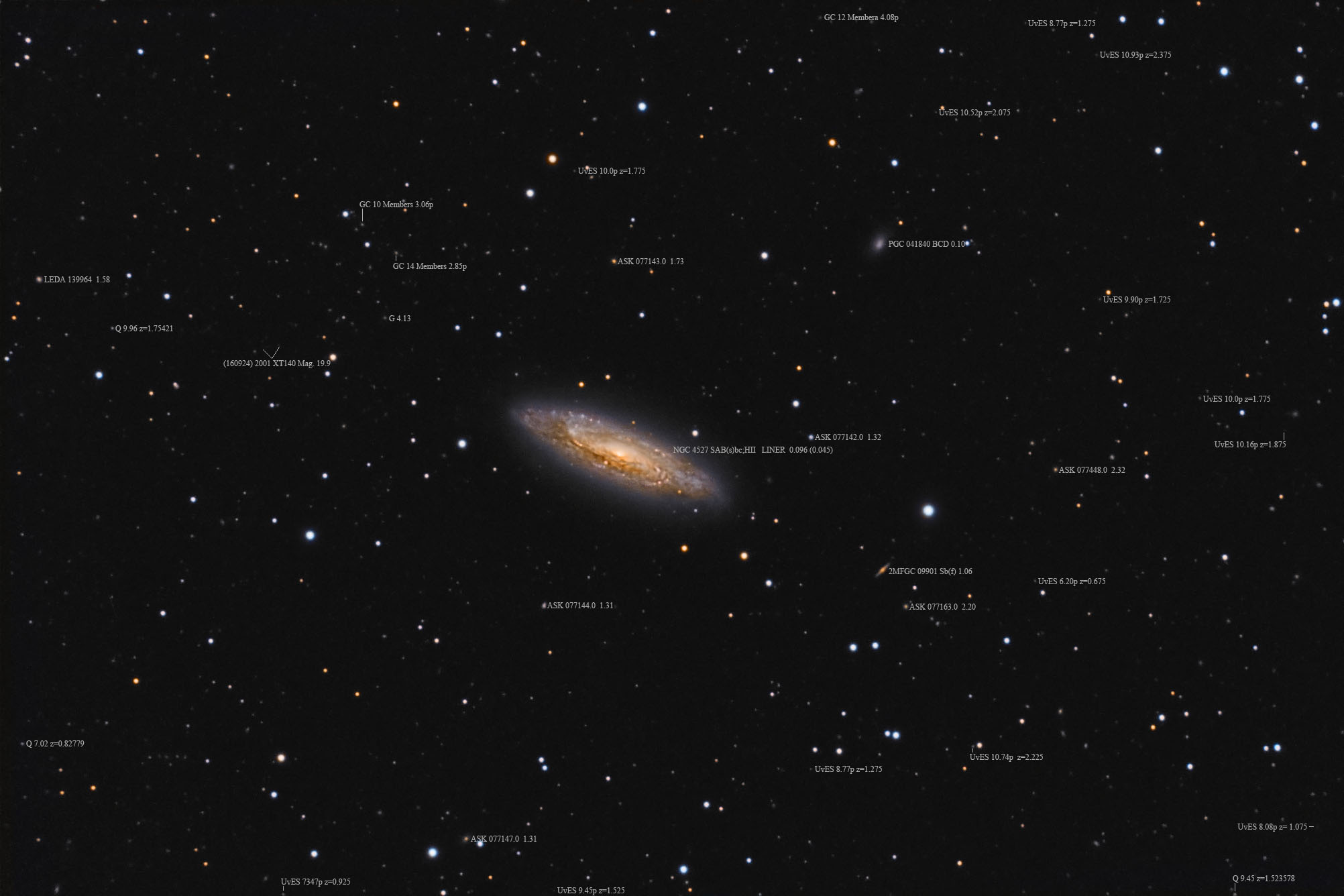 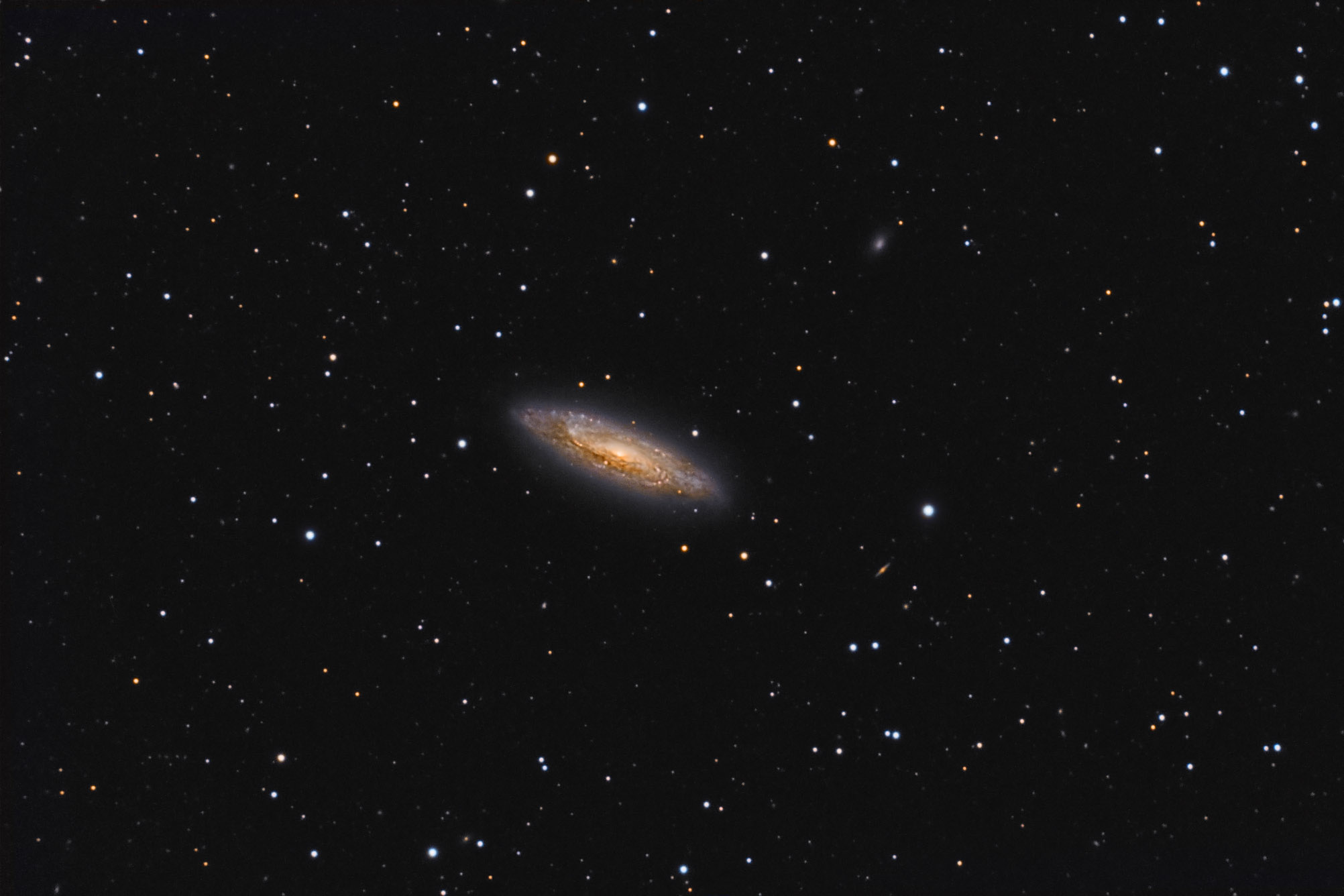