NGC 4535 is a Herschel 400 object and also a rather nice galaxy being a face on grand design barred spiral in Virgo and a member of the Virgo Cluster. William Herschel found it on the night of December 28, 1785. It is classed as SAB(s)c and has a LINER active core (Edit: Or so it was thought when I wrote this but it may be due to white dwarfs instead.) and HII emission. I\'d hoped to pick the many HII regions up but seeing was bad as it was most of this spring. That limited me to seeing a very few of the largest regions with most lost to the seeing. While redshift puts it at over 100 million light-years away this is an illusion. Analysis by the Hubble space telescope as well as many Tully Fisher distance estimates place it at about half that distance, 52 million light-years. This would put it in the Virgo Cluster.

The northern arm of the galaxy is rather strange with that suddenly bright, very straight, east-west section. That could have qualified it under Arp\'s heavy arm classification. Except for that, it is a rather normal appearing but low surface brightness spiral.

The galaxy has been called \"The Lost Galaxy\". Some sources incorrectly identify \"The Lost Galaxy\" as the much brighter and easier to see NGC 4526 only a half degree south, out of my field of view. (Edit: And not yet taken as this is written.) It too is a Herschel 400 galaxy so on my to-do list for another year. Even The Sky I use to point my telescope sent me to NGC 4526 when I entered \"Lost Galaxy\". NGC 4535 was named \"The Lost Galaxy back in the Mid 50\'s in a Sky and Telescope article. It got the name because it is very faint when viewed in a typical 1950\'s backyard telescope. They topped out at about 6\" back then. I tried to find it and couldn\'t from town in my 6\" f/12. Even my entry (with a thin 4 day crescent moon) for the Herschel 400 back on April 23, 1985 using a 10\" f/5 at 100 power to cut down moonlight reads: \"Large, very faint galaxy with much mottling. Virtually circular with a hint of an oval shape.\" I wasn\'t seeing the spiral arms, just hints of their brighter parts. This agrees well the Dreyer\'s description: \"pretty faint, very large, mottled but not resolved\". The galaxy was discovered by William Herschel on December 28, 1785. He was working late that night it would appear. You can read about the \"The Lost Galaxy\" issue at www.cloudynights.com/topic/276454-what-is-the-lost-galaxy/ . Steve Gottlieb is a major contributor to the NGC Project and a contributing editor to Sky and Telescope magazine. It is the first reply to the post asking about the name.

At the assumed 52 million light-year distance NGC 4535 is about 113,000 light-years across. Nothing else in the image appears to be in the Virgo Cluster.

One candidate quasar is in the upper left. Sloan image shows a bright core with a hint of a blue disk about it indicating it is a galaxy with a very bright core. Apparently, it is still uncertain if it rises to quasar level. In my poor seeing, it shows a slightly larger FWHM than the stars around it but I see no hint of that disk seen in the Sloan image.

Conditions, as usual, were poor. There\'s one 18th magnitude asteroid in the lower right. One of this magnitude normally easily colors the black sky beyond the luminance trail, Not this night. Also, note how it fades away showing the first couple luminance frames had better transparency than the last two. In fact, it faded away in the last frame. I had to wait several hours to get the color data. I should have put that off for another night entirely. Though I\'d have gotten little done this spring doing that. 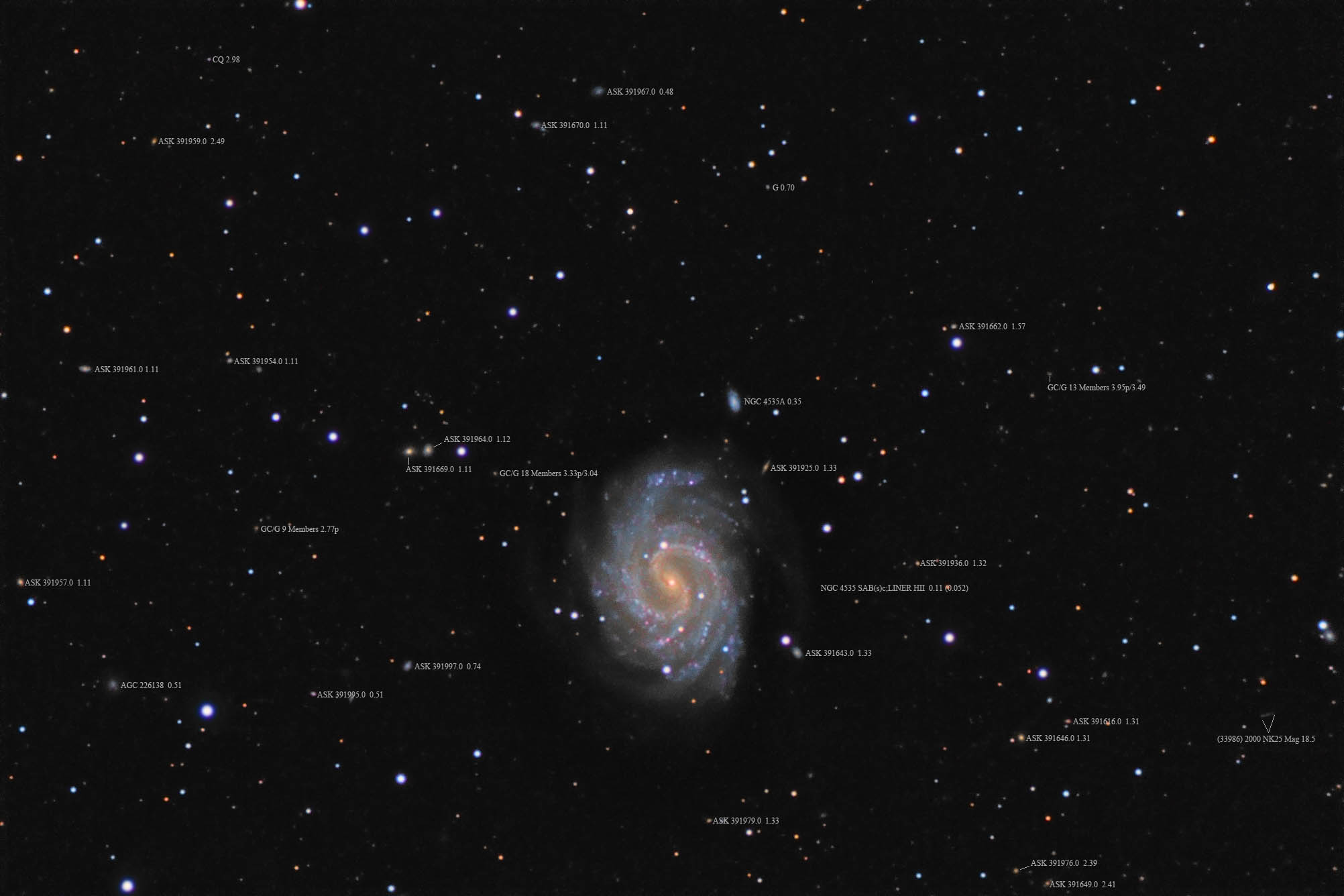 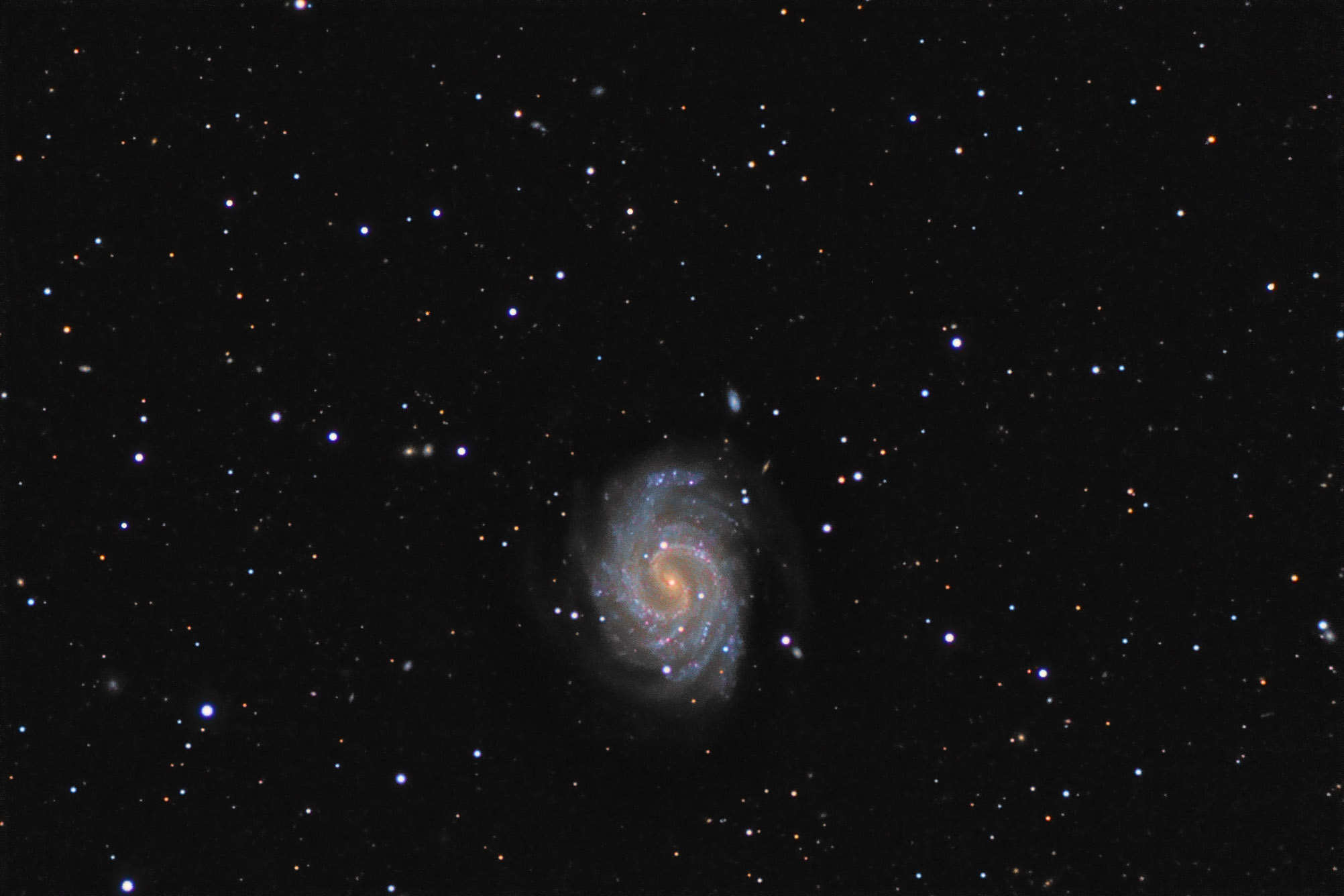