NGC 4536 is an interesting barred spiral in Virgo just above the celestial equator. It is thought to be a bit under 50 million light-years distant though its redshift puts it at twice that distance. It is classified as SAB(rs)bc with HII emission and a starburst core. It was discovered by William Herschel on January 24, 1784 and is in the original Herschel 400 list which I\'m slowly working on. My entry from April 23, 1985 with my 10\" f/5 with a 4 day moon under fair conditions at 50x reads, \" Large oval galaxy with huge curving outer arms. Fainter than NGC 4527 in the same field but far more interesting.\"

It has a very odd, very dark and red dust lane near the core like a miniature black eye galaxy. Several papers say it doesn\'t have a central bulge but does have a pseudo-bulge. Assuming the generally accepted distance of 48 million light-years it is about 110,000 light-years across. Just how do you explain this crazy dust lane? I found nothing on it.

To its north is NGC 4533. It is a near edge on SAd: spiral with a similar redshift to NGC 4536. Is it really only half that distance or is it really at its redshift distance and thus not at all related to NGC 4536. I found nothing to answer this question. If the redshift is right it is about 68,000 light-years in size. If it is the same distance as NGC 4536 it is half that size or 34,000 light-years. I\'m not going to hazard a guess on this one. It was discovered by Ernst Wilhelm Leberecht Tempel using an 11\" refractor in 1877. He is credited with finding 150 NGC galaxies and, of course, the comet Tempel 1 that Pete Schultz\'s impactor punched a crater into on July 4, 2005.

There are quite a few galaxies in the field that have redshifts that put them about 1 billion light-years distant. They are likely members of the Abell 1564 galaxy cluster. It\'s center is about 7 minutes below the bottom of my image and is listed as 30 minutes in diameter. Its distance is listed at 1.05 billion light-years. A very good match to the galaxies I\'m speaking of. They all fall within the 15 minute radius of the cluster.

There are also several at 1.81 billion light-years including a tight group of 4 just off the southeast edge of NGC 4536 and a pair to the southwest with a lone galaxy above the pair. To their west is a (N)arrow (E)mission (L)ine (G)alaxy at 1.9 billion light-years by redshift. It may also be part of this group. Others at about 1.8 billion light-years are around NGC 4336. However, I found no mention of any cluster fitting that distance.

One faint asteroid is in the image as well as some quasar candidates (UvES) with only photographic distance determinations.

Conditions were poor for this image seeing was well below normal for the luminance frames and got really bad during the red frames. The FWHM of the red frames was more than twice that of green and blue. I stopped and took the green and blue the following night. I should have redone the red. It made for a processing nightmare that I only sort of compensated for. Why I didn\'t redo the red and the luminance I don\'t know. Apparently, I didn\'t think it as bad as it was. 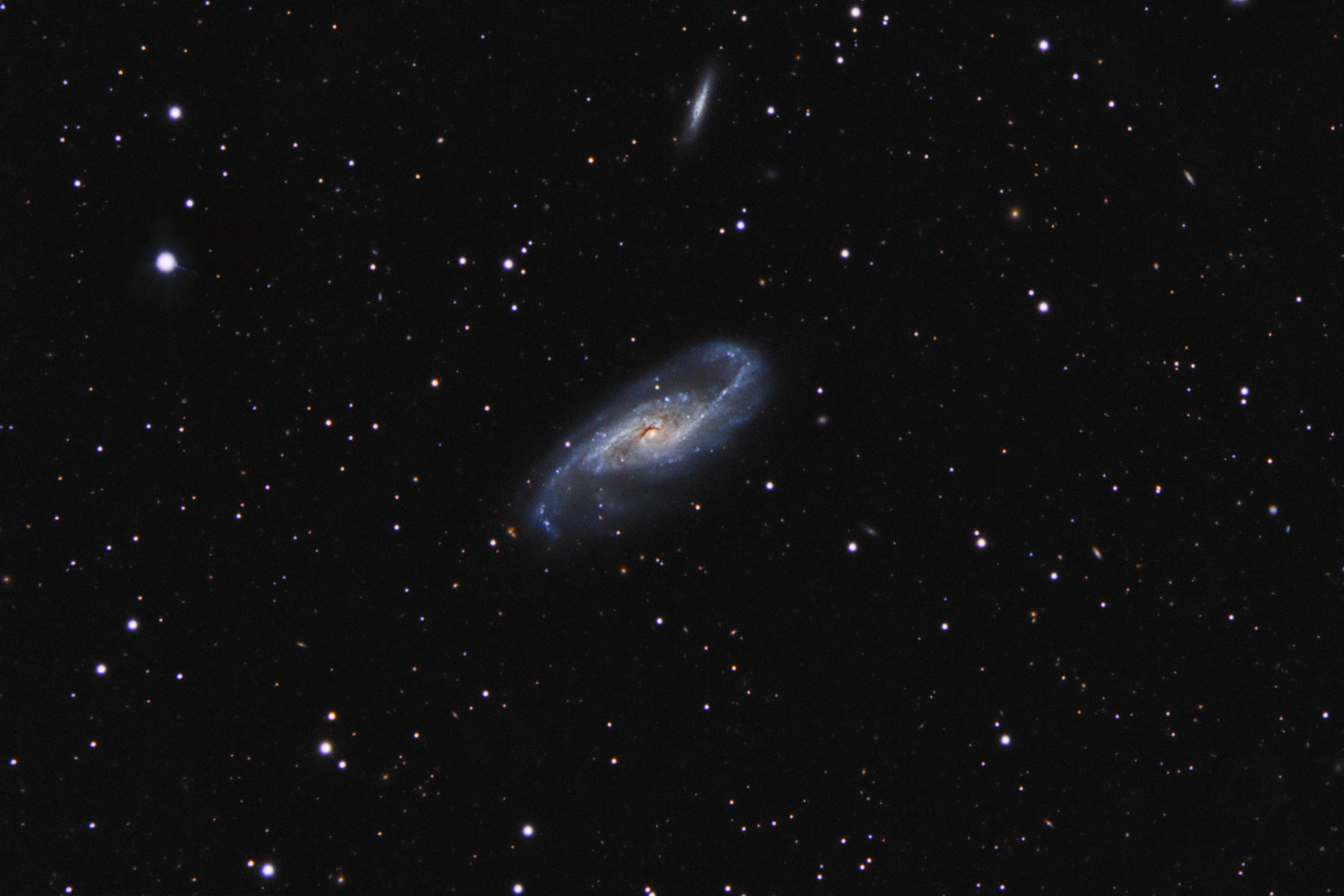 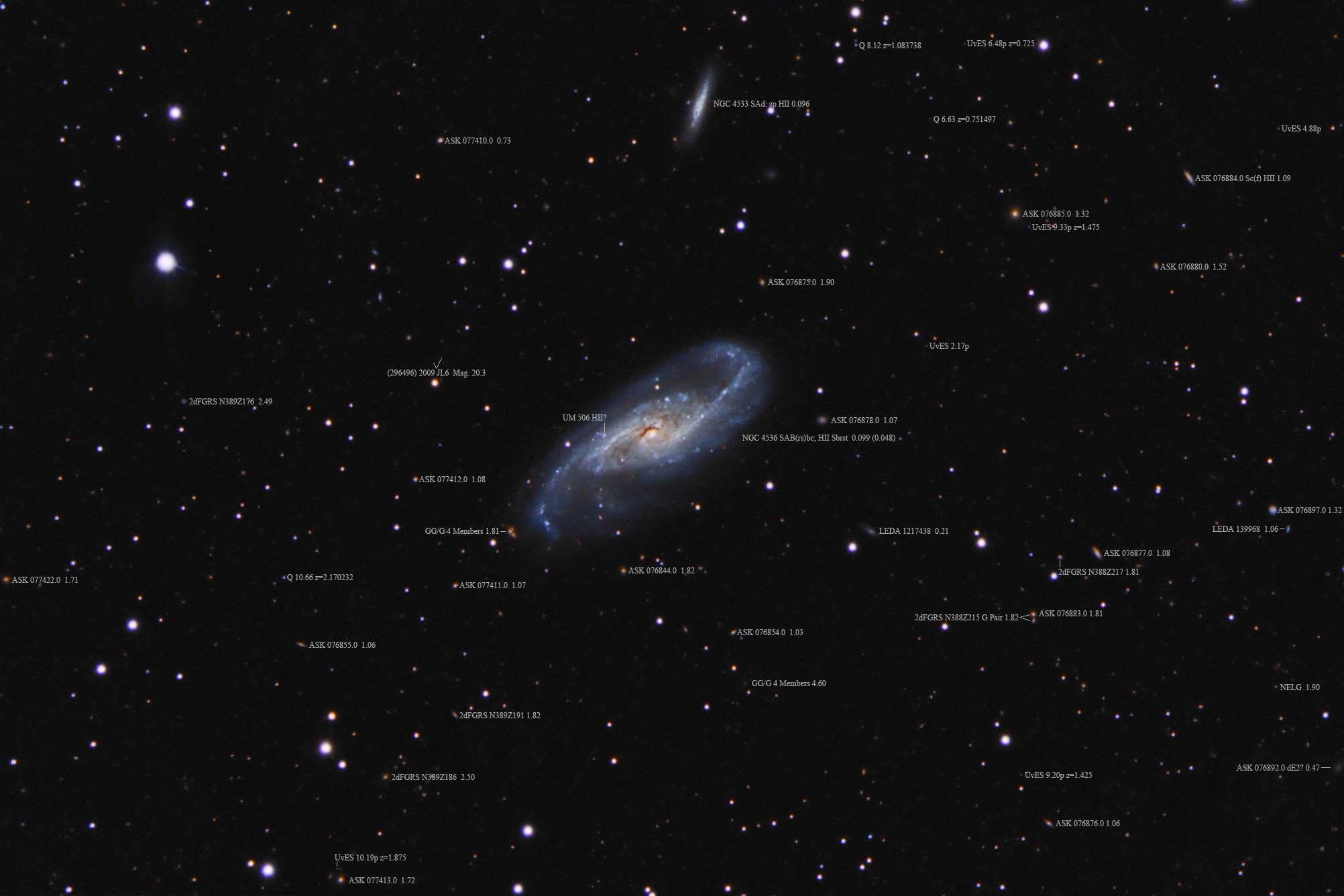