NGC 4559 is a very low surface brightness blue galaxy. You may see the trend here. I\'d planned on imaging a bunch of these guys this winter but most have been lost due to the lousy weather all year. Being of low surface brightness they aren\'t good targets for nights with moonlight. This galaxy is in the constellation of Coma Berenices and isn\'t far from the Virgo Cluster. Though it appears this galaxy is not a member of this huge group of galaxies. Its distance is hard to determine. Based on a supernova seen in 1941 it would be about 20 to 30 million light-years away. Its redshift distance is about 50 million light-years based on NED data though I\'ve seen NASA claim its redshift says it is only 35 million light-years away. They don\'t give their source, however. If 50 million is right then it could be a member of the Virgo Cluster after all. And you thought we knew our nearby neighborhood better than that.

Some papers claim the blue color is due to a collision of the outer halo of this galaxy with a dwarf galaxy that has triggered massive star formation. Some even claim the dwarf galaxy is NGC 4559C (IC 1350). Seligman doesn\'t agree saying IC 1350 is a very different galaxy nor does he give any identification of the blob. This is the tiny blue blob seen in a faint outer arm on the right side of the galaxy. Most images of this galaxy don\'t go as deep as my shot and this blob is indeed separate from the galaxy in those shots. But to me, this looks like just another star knot. in an outer arm and not a separate galaxy at all. I can\'t find any redshift data on it. Again, It just shows how little we know about even nearby galaxies. The brightest galaxy besides 4559 in the image is NGC 4559A (IC 3592) at the lower left. It isn\'t related at all showing a redshift distance of about 340 million light years. There are a bunch of HII regions in this galaxy but they are all smaller than 3\" of arc. My seeing on this image was 3.2\" so no way I can show them. Using an H-alpha filter should bring them out. That will have to wait for another year. When I was processing this image I saw a funny dark arc (almost like a smile) below the nucleus. I was sure there was a problem with my flats and some dust had gotten in between the time I took the flats and I took the object. But I found it in observatory shots so it is real. It doesn\'t flow with the rest of the arms in ordinary light but does seem to fit in the ultraviolet image though is much broader in ultraviolet light.

Due to all the massive young stars, this galaxy emits a lot of ultraviolet light and is well seen by Galex. But its X-ray spectrum is inconsistent with what would be expected from the ultraviolet spectrum. Again, showing the universe still has a lot to teach us. You can see an ultraviolet photo of it at http://en.wikipedia.org/wiki/Image:NGC_4559_I_FUV_g2006.jpg taken by the Galex satellite. Notice how NGC 4559C also appears to be in that faint arm in that light as well. But in ordinary red light of the Palomar Observatory Sky Survey Plates, it appears totally detached from the galaxy. Note this image was taken with the 48\" Schmidt telescope on Mt. Palomar but using film technology. Thus I can see far fainter parts of the galaxy using electronic detectors than a much larger scope can see using film. The exposure time is similar as well as the image scale. http://stdatu.stsci.edu/cgi-bin/dss_search?v=poss2ukstu_red&r=12+35+57.65&d=%2B27+57+36.0&e=J2000&h=15.0&w=15.0&f=gif&c=none&fov=NONE&v3= 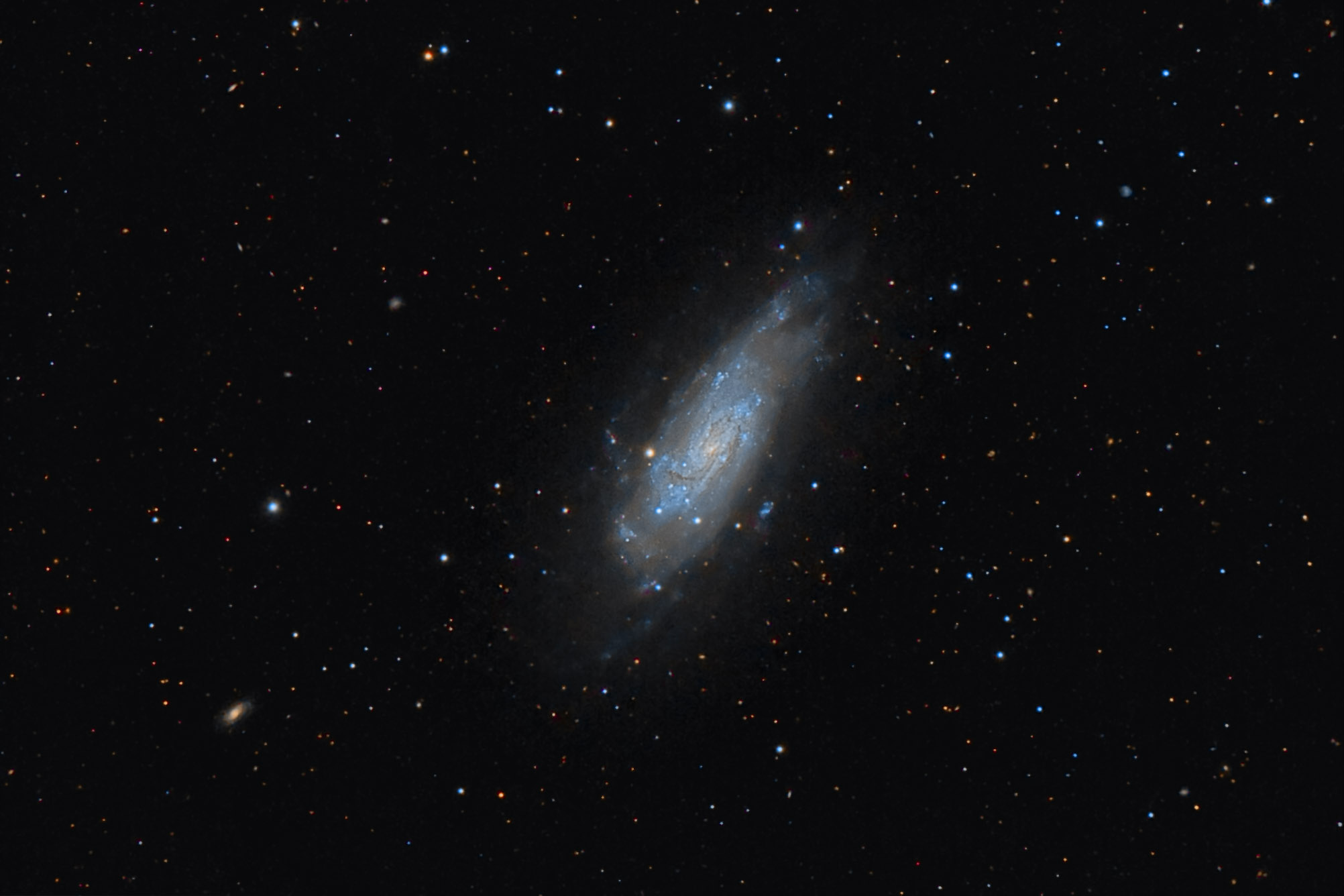