FGC 1471 is an edge on spiral galaxy in Coma Berenices. NED says it SA(s)b? with two cores separated by 0.8\" one Sy3 the other Sy1.9. As I rather like flat galaxies like those in the FGC I\'m working on imaging the more photogenic ones in the catalog. This is likely the best of the catalog so a good place to start. You probably know it by its more common names, NGC 4565 or the Needle Galaxy. NGC Project says Sb I. While red shift puts it at 70 million light-years a closer distance seems more likely as that would move it beyond the Virgo Cluster and require it to be enormous. NED has measurements ranging from 30 to 72, averaging about 42. APOD says 30 million light-years in several references to it. Its angular size argues for the smaller figure. I measure it at 16.5 minutes of arc from end to end. That would be 144,000 light-years, assuming the 30 million light-year distance making it considerably larger than our galaxy or the Andromeda Galaxy.

I\'d not noticed before that its disk is warped at the ends. This though might be related to the second active region 0.8\" from the galaxy core. If this is a merger situation that could have created the warp. At some wavelengths, the second active region is brighter than the core itself. This too could be due to it traveling though the galaxy in a merger situation though other explanations are possible as well. NGC 4562 appears to have an off-center core so the warping could be due to an interaction between the two in the past.

NGC 4565 was discovered by William Herschel on April 6, 1785. Of course, it is in the original H400 program. My entry from April 23, 1985 on a fair night with a moon with the 10\" f/5 at 150x reads, \"Large edge-on galaxy with a very prominent dust lane and central bulge. Seems to be nearly as wide as the field of view. One of the few galaxies that looks like its picture. This one is a winner for a change.\" Somehow I was seeing the bulge as larger in comparison to the disk which means I likely wasn\'t seeing the full extent of the disk.

Two other galaxies share about the same redshift as NGC 4565. They are likely gravitationally bound to it as satellites or at least members of its group. I\'ll assume, they too, are much closer than their redshift would indicate at about the same distance as NGC 4565. NGC 4562 was discovered by Wilhelm Temple sometime in 1882. I couldn\'t find an exact date. It is typed as SBbc?. IC 3571 a smudge of an irregular galaxy was found by Max Wolf on a photograph he took on March 23, 1903. That\'s a pretty faint smudge for the film and telescopes of that day. I couldn\'t find the original image on the net.

I took a lot more data on this one but when I went to process it had horrid reflections I couldn\'t remove. What caused them is a mystery to me. This left me with only one sixth the color data and one third the luminance. All taken when lower in the sky with poorer seeing. I\'ll have to try yet again on this one. So far, since going digital, something has thwarted all attempts. This was the only one with usable color data and that is so thin it is very noisy. Somehow with all that against me, the image turned out far better than I expected. I doubt I could improve it much other than lowering the noise some. Note too it uses only 70 total minutes of data.

The WHL J123614.7+255457 galaxy cluster at 5.8 billion light-years by photographic redshift measurements is southwest of the galaxy. It has 11 members. The BCG for the cluster has no redshift data but is only one second of arc from the cluster\'s position so I used one label with a question mark for the galaxies distance. It appears many of the 11 members are also faintly visible in the area. Two other catalogs list this same cluster but without any galaxy count and with distances of about the same as those already mentioned. I didn\'t label them as things could get crowded with no real useful added data. To the southeast of this group is another, GMBCG J189.25931+25.84396 with 13 members at a distance of 3.5 billion light-years. In this case, the redshift-distance of the cluster and galaxy agree. But while the positions given for each are within a second of arc of each other the cluster has an error circle of 30 seconds of arc while the galaxy has one of 0.5\" which matches my position for the BCG I\'ve labeled.

Near the east edge of the image is another obvious galaxy cluster. No individual member has a redshift listed in NED. The cluster itself is NSCS J123523+255636 and has a redshift putting it about 3.4 billion light-years distant. I\'ve drawn a line to the approximate center of the cluster. The error circle is 15\" of arc so the position is the best I can do.

For such a studied region I found many of the position measurements surprisingly vague. Usually, NED has an error circle of 0.5\" of arc but here the error circle was much larger. For the quasar, at 10.5 million light-years it was 37.5 seconds though with the help of the Sloan survey I was able to find it within about 13 seconds of the given location. Then there\'s the little cluster of galaxies off the southeast end of the galaxy. It has two designations with the same location but an error circle of 15\" of arc. The position of the BCG was better at 1.5 seconds of arc. Still three times greater than what I\'m used to. All had the same given position and were within <1\" of my position so why the large uncertainty I don\'t know. But the differences continue. WHL J123647.1+255131 is listed as having 14 members at a redshift distance of 2.25 billion light-years while MaxBCG J189.19641+25.85862 at the same position is said to have 24 members at a distance of 2.35 billion light-years. The BCG, however, is listed at 2.20 billion light-years. As all are photographically determined the difference doesn\'t surprise me but the galaxy count difference does. Could be due to the larger count going out further from the center but why don\'t they specify that distance? Very frustrating to me. I could see it in a rather obscure part of the sky but this is a very highly studied region. NGC 4565 is listed by NED in 35 catalogs. 3 radio, 5 IR, 21 visual and 6 X-ray.

For the large number of faint fuzzies in the image, very few have any redshift data making for a surprisingly sparse annotated image. Apparently, all study the big ape in the room and ignore nearly everything else. 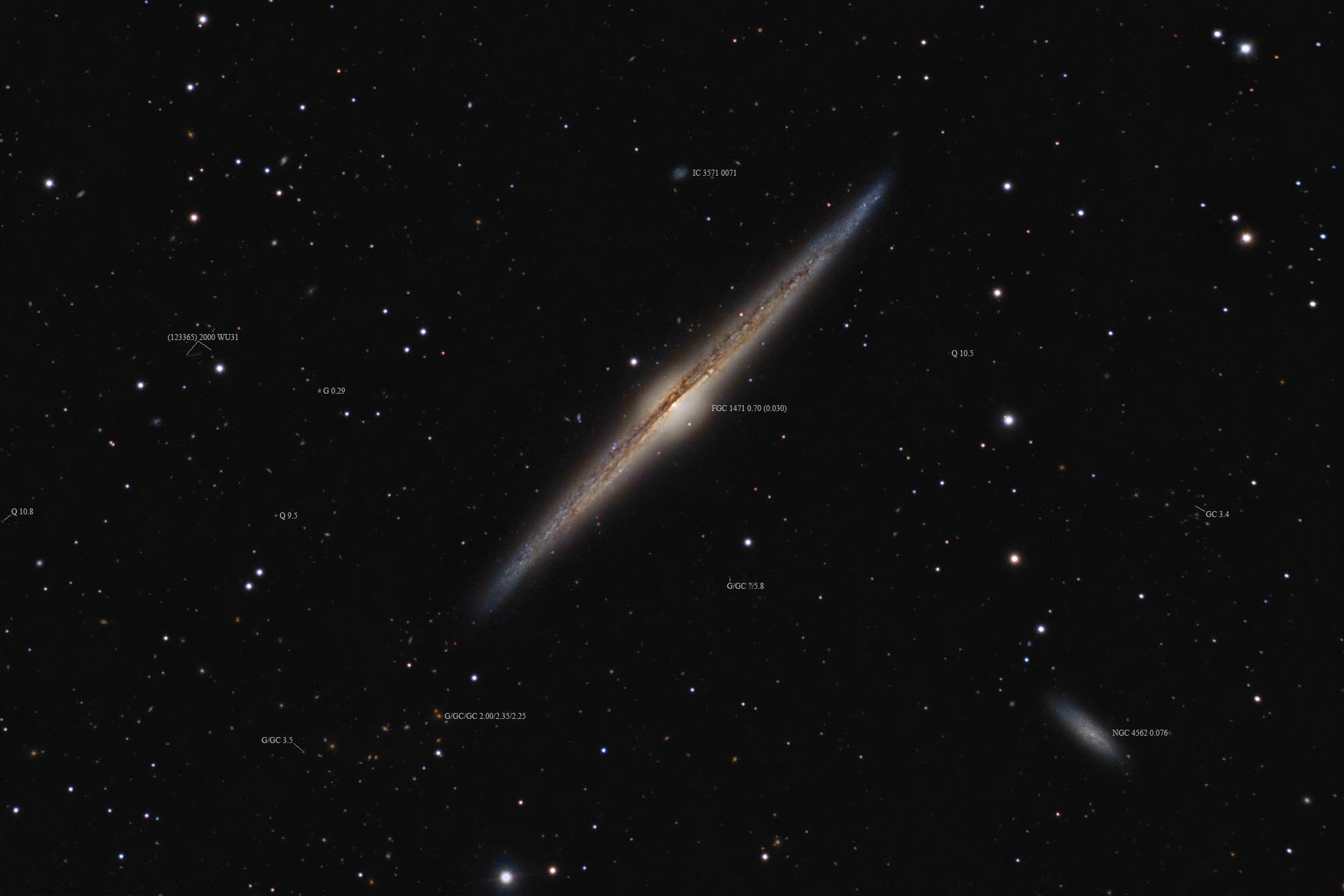 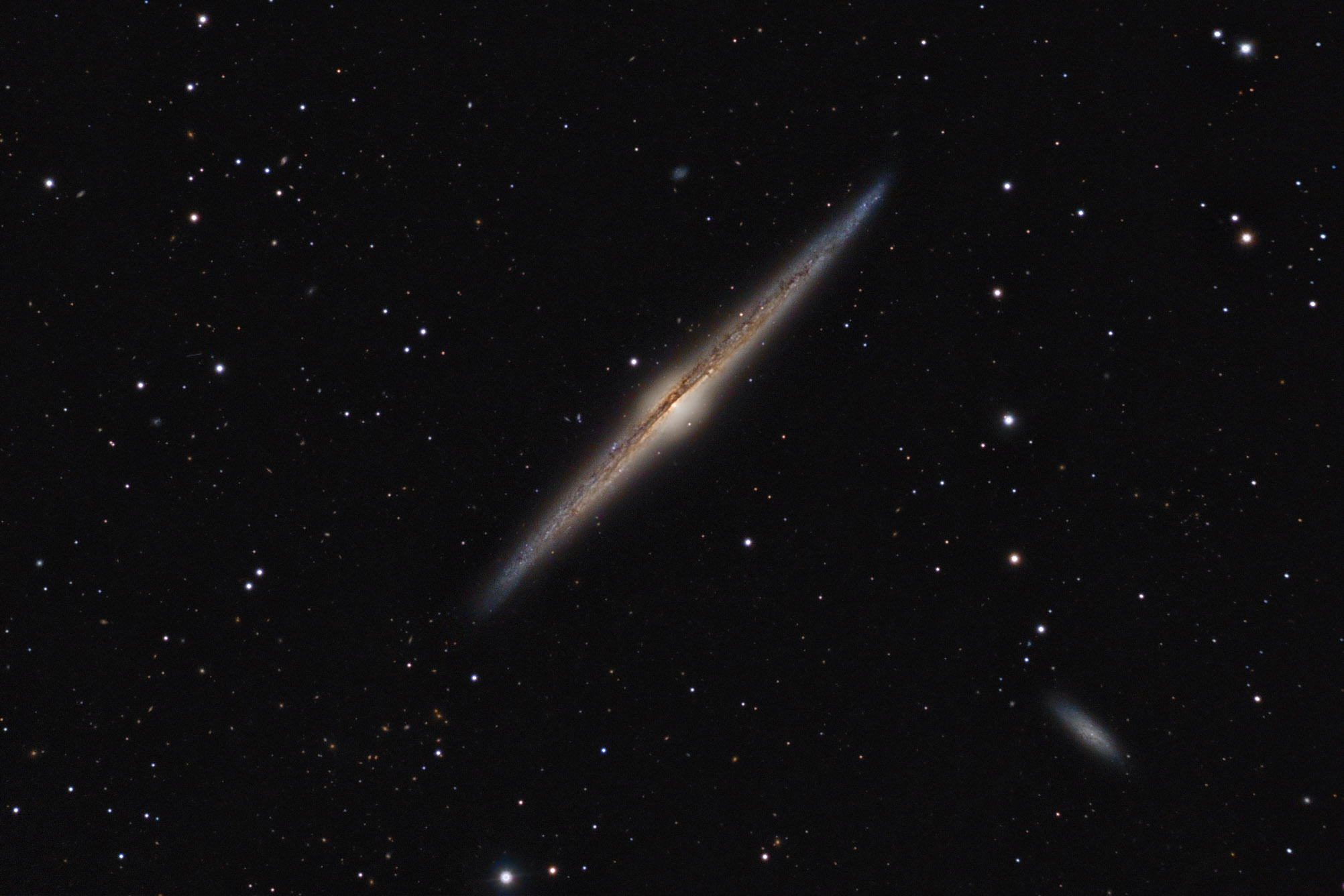 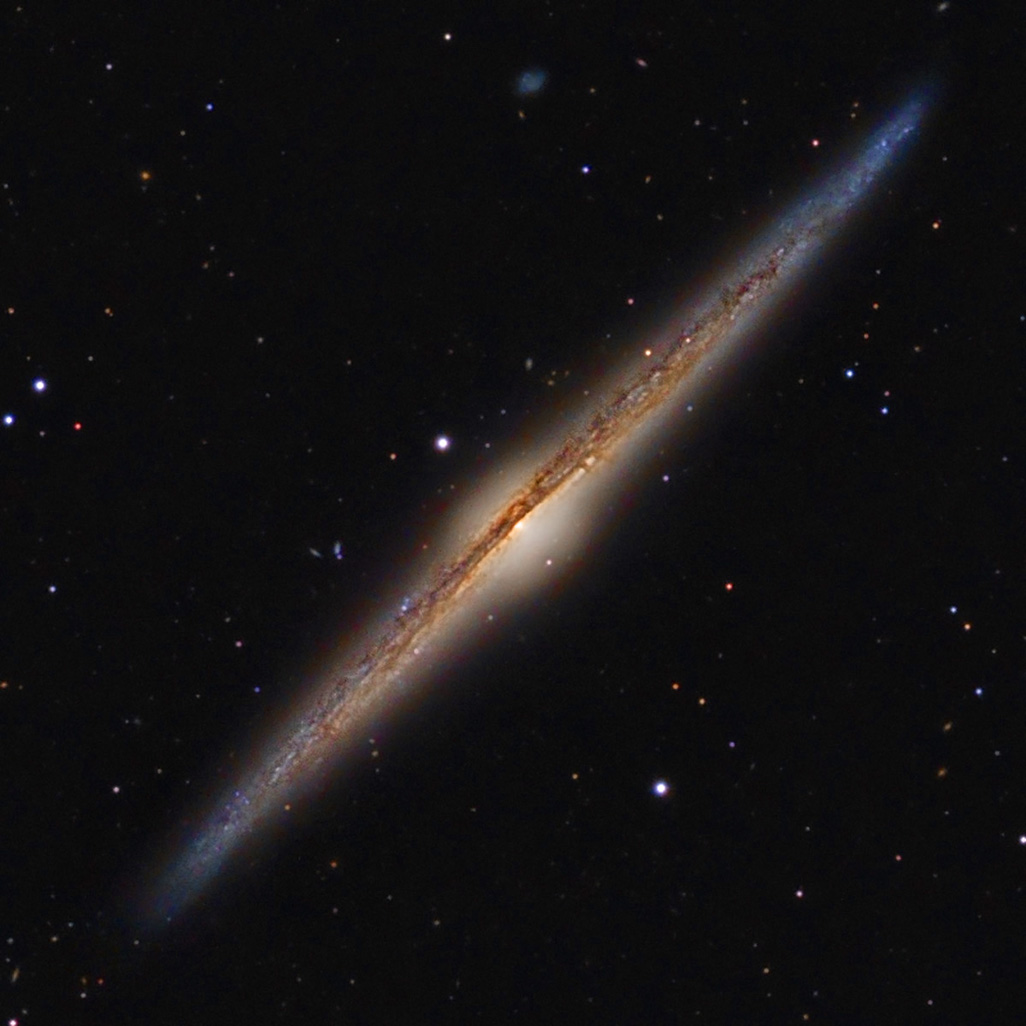