NGC 4571 is a face on low surface brightness galaxy in the Virgo Cluster a half degree southeast of M91. Thus, while a member of the Virgo Cluster it is located in southern Coma Berenices. It has low contrast blue arms on a mostly featureless reddish disk with a small rather bright core. One paper says it has an arm structure similar to M101. I really pushed the contrast and color saturation to bring out these very low contrast arms. Its distance is only 31 million light-years by redshift which is undoubtedly too close. Virgo Cluster galaxies have rather high velocities that make redshift an unreliable distance indicator. Tully-Fisher measurements show a distance of about 50 million light-years which is much more reasonable but likely still too close. I\'m finding most current sources are saying about 60 million light-years for its distance which is pretty much the accepted distance to the Virgo cluster itself. Using 60 million light-years for its distance I get a size of 72,000 light-years. It was discovered by William Herschel on 4571. John Herschel thought it might be M91 which led to years of confusion before NGC 4548 was settled on as Messier\'s M91. On November 23, 1900, Arnold Schwassmann came across the galaxy. For reasons I haven\'t been able to discover Dreyer treated it as a new object giving it the designation IC 3588. Was the confusion over M91 to blame? I can\'t find the answer but tend to doubt it.

To the northeast is Malin 1 and Malin 1B. A note at NED says: \"This galaxy (Malin 1B) has previously been given a stellar classification owing to its round shape. The high resolution of WFPC2, however, enabled us to view the galaxy\'s faint disk and thereby determine its true nature as a galaxy.\" In my data, it doesn\'t have a PSF of a star though is close. Still, even by eye, I didn\'t think it a star so find this note rather puzzling. That brings up Malin 1 itself which is listed as being a GLSBG which stands for Giant Low Surface Brightness Galaxy. Its core certainly isn\'t unusually faint but its disk is in relation to the core. I measure it at about 100,000 light-years in size. I\'m not sure how that makes it a giant. Maybe I\'m not seeing its full extent though I do see the same size as the SDSS image. Turns out neither I nor SLOAN is seeing it\'s true size. See http://www.slate.com/blogs/bad_astronomy/2016/02/04/malin_1_is_the_biggest_spiral_galaxy_known.html for the story and a very deep image.

Another puzzle is PGC 042178 to the northeast. It is blue shifted so I list its distance as n/a. It is classified as dE4,N which is a dwarf elliptical with a nucleus. It does have a blue starlike object west of its center. Looking at its PSF in my data it is a star. Sloan image also makes it appear to be a star. If it is a foreground star then where\'s the nucleus? Another blue shifted dwarf elliptical, PGC 042193 is seen near the eastern edge of my image. It has no nucleus though is a bit brighter if you ignore the star-like object in the former galaxy. Are they related, are they in the Virgo Cluster? I found no answers. 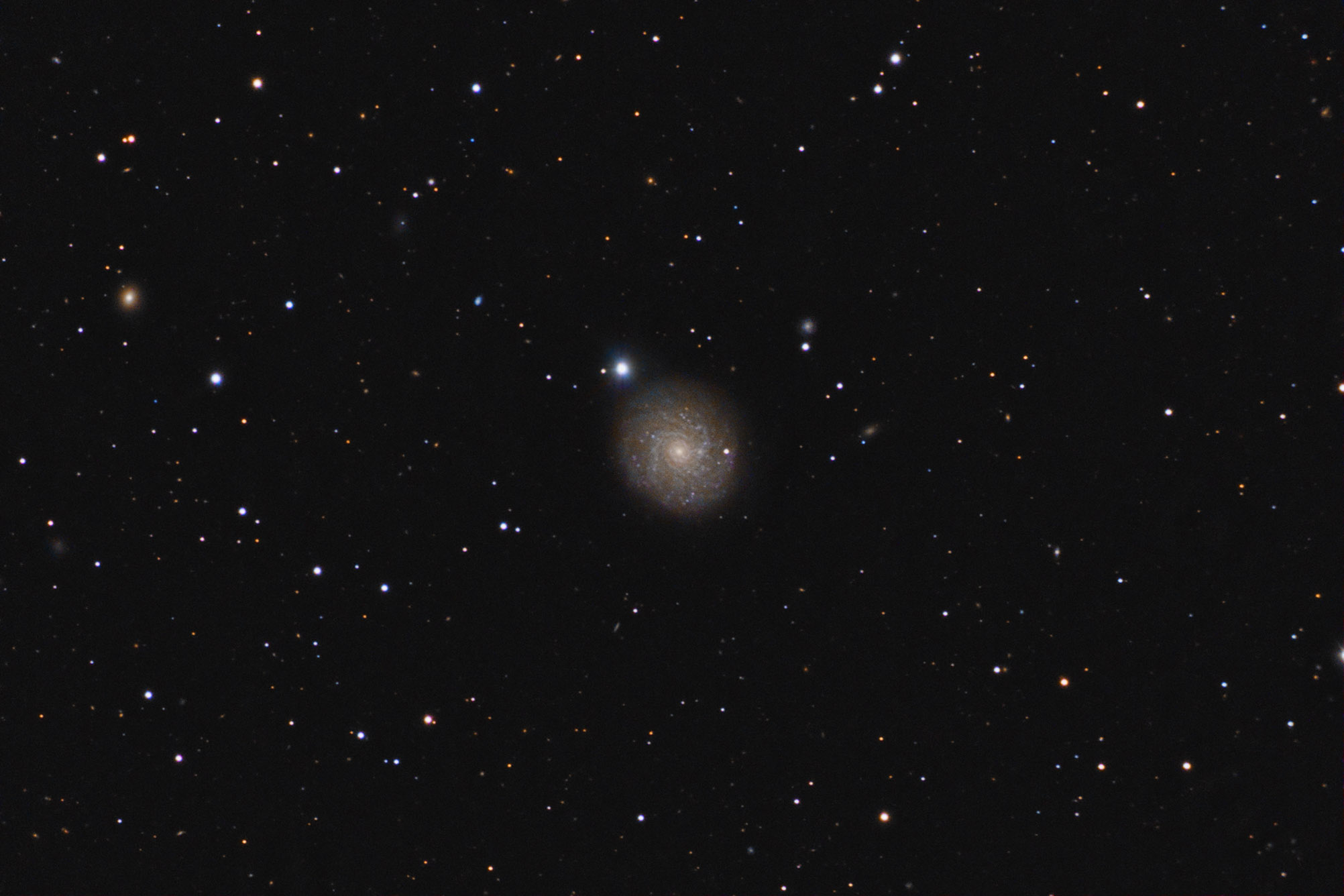 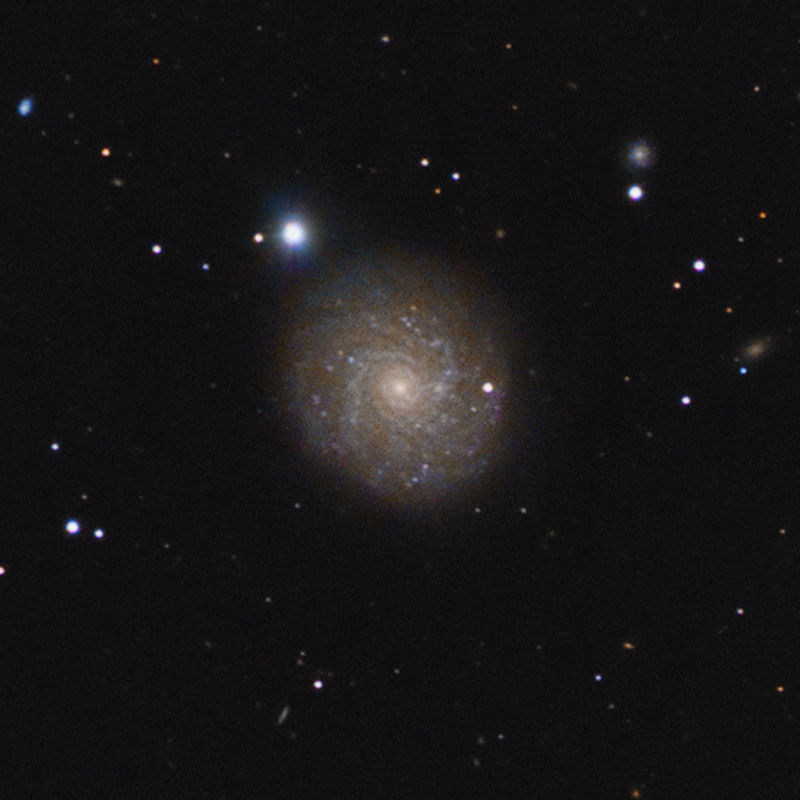 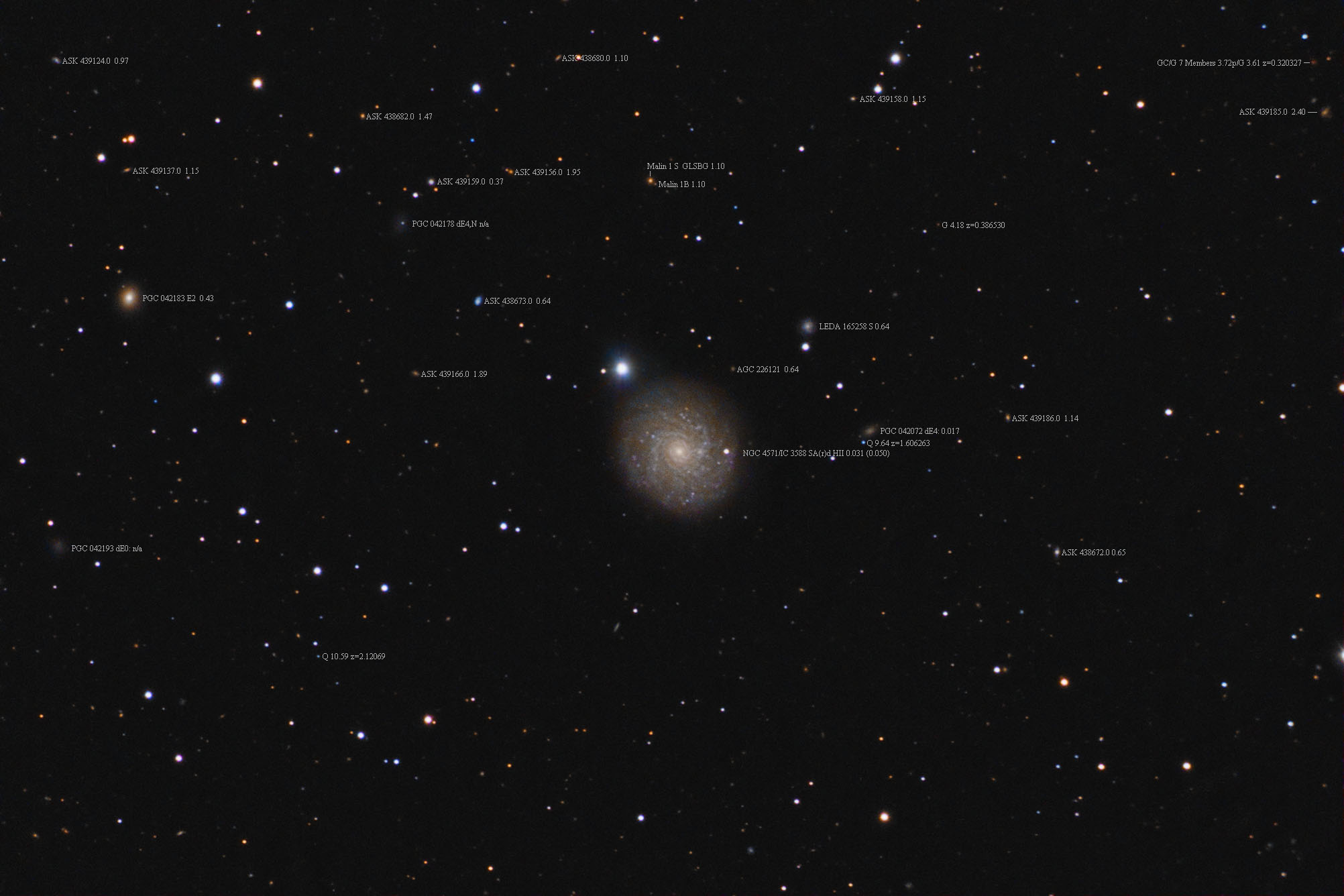