NGC 4666 is a very active galaxy though doesn\'t look it in ordinary light. Seen in X-rays however it is a different story. While not listed at NED as a starburst galaxy it is one. This has resulted in a \"super wind\" of very hot gasses coming from the core of the galaxy and blowing away from it at high speed. There\'s a lot on this on the web. One article is here: https://www.eso.org/public/usa/news/eso1036/ It refers to the galaxy cluster in my annotated image toward the bottom of my image.

What attracted me to it was it was in the 2MFGC as a flat galaxy. It\'s somewhat unusual for a starburst galaxy to have a small central bulge. So I was surprised to find that it was such an active starburst galaxy. While NED classifies it as SABc:; I see no bar. Neither does the NGC Project that says it is Sc but Seligman says SBc? again with a bar. Seen rather edge on it is hard to tell who is right. The galaxy was discovered by William Herschel on February 22, 1784. It is in the original Herschel 400 observing program. Another reason it was on my to-do list. My notes from April 23, 1985 under poor conditions with ground fog using my 10\" f/5 says simply: \"Highly elongated galaxy, otherwise little noted. Hint of two other galaxies in the field but they are very difficult to see through the fog.\" I assume those were the other two NGC galaxies in my image. I was using only 50x due to the conditions. I find distance estimates in published papers running from 60 to 80 million light-years. The latest says 80 so using that I get a size of a bit over 115,000 light-years so a rather large spiral. It is located in Virgo a bit northeast (1.3 degrees) of Porrima (Gamma).

To its southeast is NGC 4668. It is listed as Sb(s)d: by NED though it looks rather disorganized to me. Seligman says SBcd? while the NGC project says SBcd Irr. I can agree to the Irr part. NED shows a star cloud in it as a separate galaxy. I\'ve noted it on the annotated image but am quite sure it is just a star cloud in the galaxy. It was discovered on April 11, 1787 by William Herschel. Apparently, he didn\'t see it when he recorded NGC 4666. It\'s not in either of the Herschel 400 observing programs. Assuming a 90 million light-year distance it is about 40,000 light-years across, rather typical for this type of galaxy.

The other NGC galaxy in the image is NGC 4653. It too is a William Herschel discovery. He found it on April 11, 1787 the same night as NGC 4668. He scanned by declination letting the earth\'s rotation bring objects into view. NGC 4653 and 4668 may be just far enough south of 4666 that these weren\'t in the scan that picked it up. NGC 4653 isn\'t in either Herschel 400 program. NED classifies it as SAB(rs)cd. The NGC project says simply Sc while Seligman says SBc?. So again there\'s a disagreement over the galaxy having a bar. This galaxy has a lot of detail but the night I took this image was so poor much of it is lost. Assuming its distance is 140 million light-years I get a size of 113,000 light-years thanks to its faint outer structures.

One distant galaxy to the west of NGC 4666 is ASK 001562.0. At 2.76 billion light-years I can\'t see much detail. It is listed as being a XBONG galaxy. That is an X-ray Bright Optically Normal Galaxy. Odd but that seems to describe NGC 4666 as well. Another rather unusual label is found east of NGC 4666, RQQ AGN which stands for a Radio Quiet Quasar. The AGN label is found on most quasars as they are the ultimate active nucleus but since NED included it I did too. Quasar is a short way of saying quasi-stellar radio source so a radio quiet one is unusual.

There were quite a few asteroids in the image that I\'d normally show but this was taken under very poor transparency, only one showed up enough to point out. That only barely. But most of this spring has had poor transparency so to get anything at all I had to endure it, unfortunately. Didn\'t help that seeing wasn\'t very good either. Stars are wonky as it was drizzling shortly before this was taken. After it quit due to the short nights of May I didn\'t wait for the scope to equalize (takes about 30 minutes which I don\'t have this time of the year being so far north). Tube currents then play havoc with star shapes. 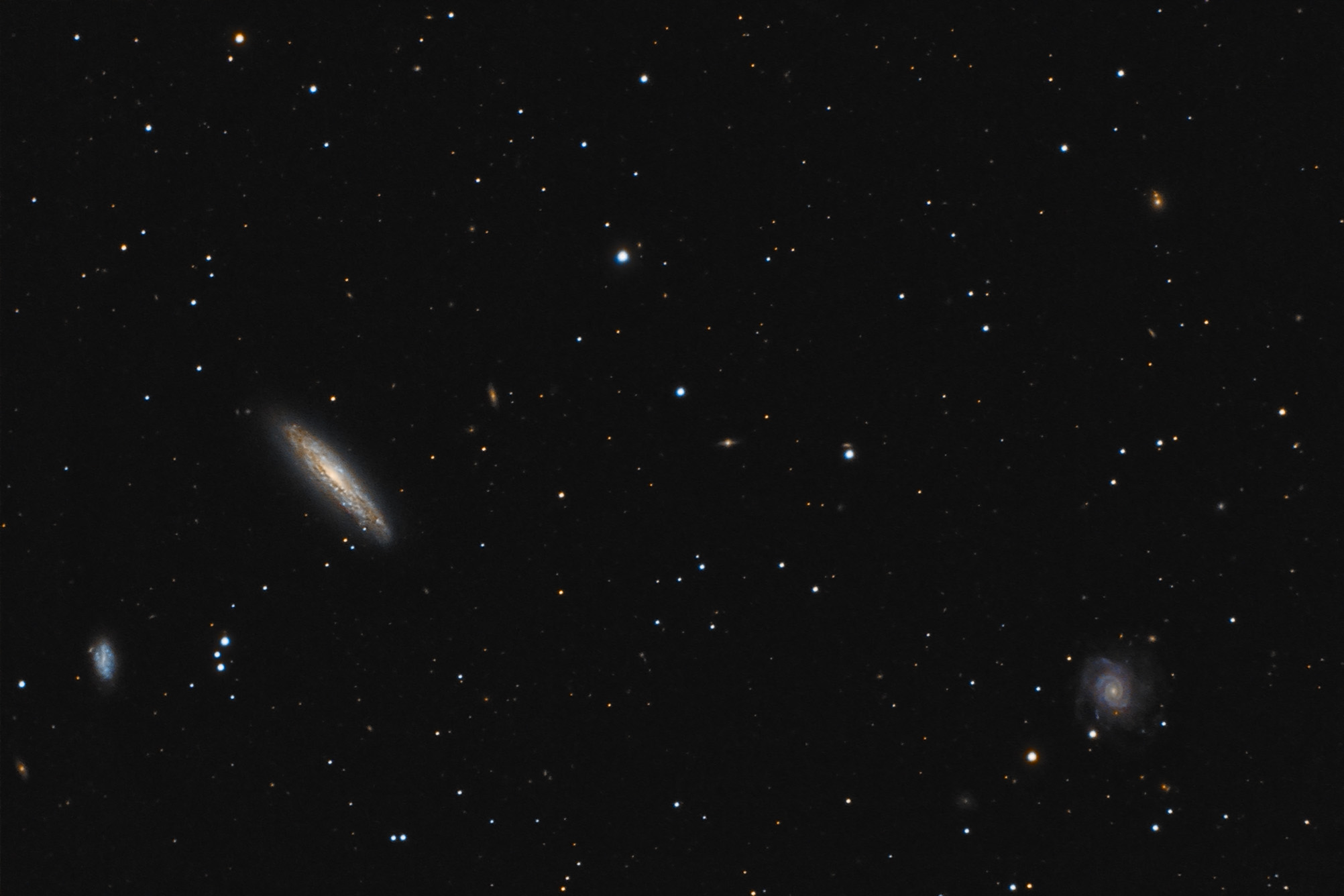 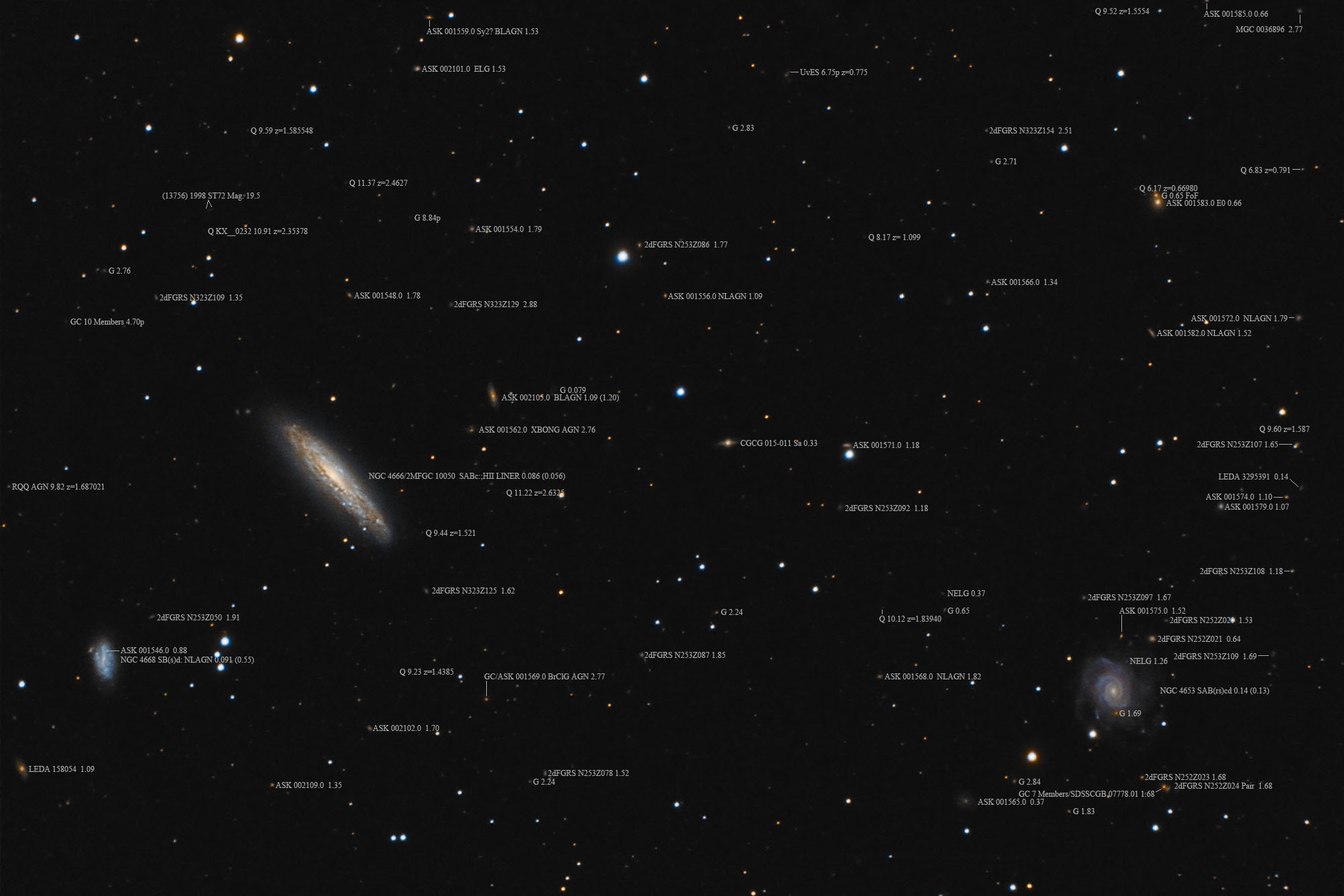