NGC 4689 is a rather lonely galaxy in southern Coma Berenices. It may appear to have a very low surface brightness but that is due more to conditions. I took this on a night that started out great for the first luminance frame then fog rolled in but I\'d gone to bed so didn\'t notice. Cloud sensor decided it wasn\'t too bad and let it go. The result is the very bright stars put a huge fog across much of the image costing me several magnitudes. This is why so little is seen in the background. It was wiped out by the fog. I needed to retake it but by the time I saw how bad conditions were it was too far west. Maybe next year. I did find bringing out detail difficult. It took a lot of work. I put it down to the fog. Then I looked at the Sloan image. http://skyservice.pha.jhu.edu/DR9/ImgCutout/getjpeg.aspx?ra=191.94&dec=13.76278&scale=0.792254&width=800&height=800&opt=&query=
it showed a very fuzzy image. Mine started to look much better though the fog cost me the faint outer parts of the galaxy seen in the Sloan image as well as in the one lone amateur image of it I found. Then I was reading notes on it at NED and this one said it perfectly. \"Upon inspecting this image on this plate, one viewer commented, \'When man creates a sharper telescope, God will create a fuzzier object.\'\"

It was discovered by William Herschel on April 12, 1784 and is in the original H400 observing program. As I saw all in that with my 6\" f/4 it can\'t be all that low surface brightness. Besides I was working under similar condition over 30 years ago when I logged it. My entry from my observation with the 10\" f/5 on April 23, 1985 at 50x reads: \"Rather oval splotch of a galaxy near two bright field stars. It seems 3.5x2.5 to my eye, somewhat smaller than shown in the guide. It\'s a very faint galaxy on an increasingly foggy (ground fog) night.\" Most cite its size at 4.3x3.5 minutes in size but I get only 3x2.5 minutes through the fog. Smaller than my visual estimate. Obviously, one to be revisited but that is unlikely to happen.

I had to put the galaxy high in the field because of the 6th magnitude A1V star, 26 Comae Berenices. It was creating ghosts no matter what I did until I moved the field to where I did. That used up a frame or two of fog-free skies, unfortunately. To the southeast of NGC 4689 is PGC 043216, a faint apparent dwarf galaxy. I couldn\'t find much of anything on it, however. Its relation to NGC 4689 remains a mystery to me. 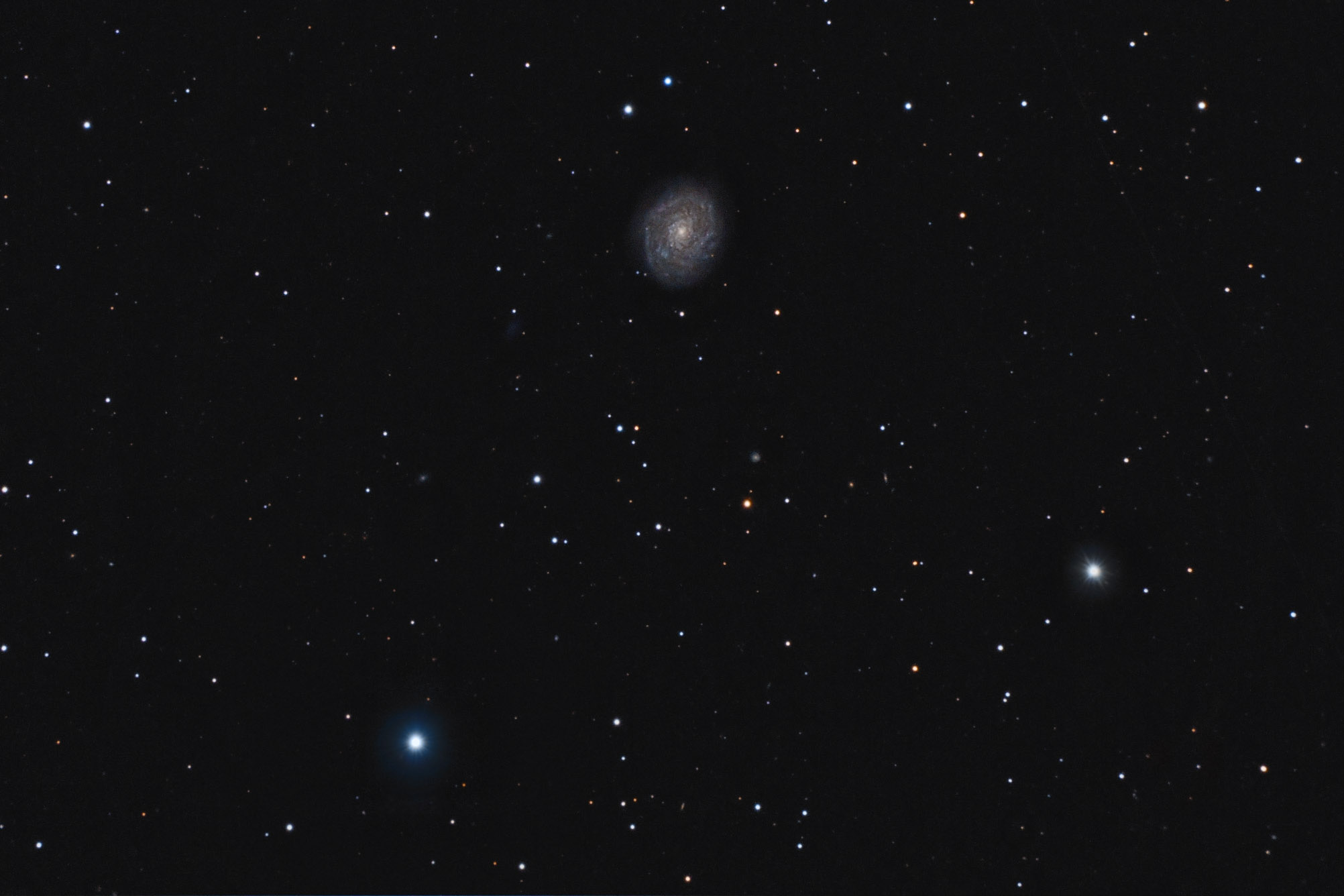 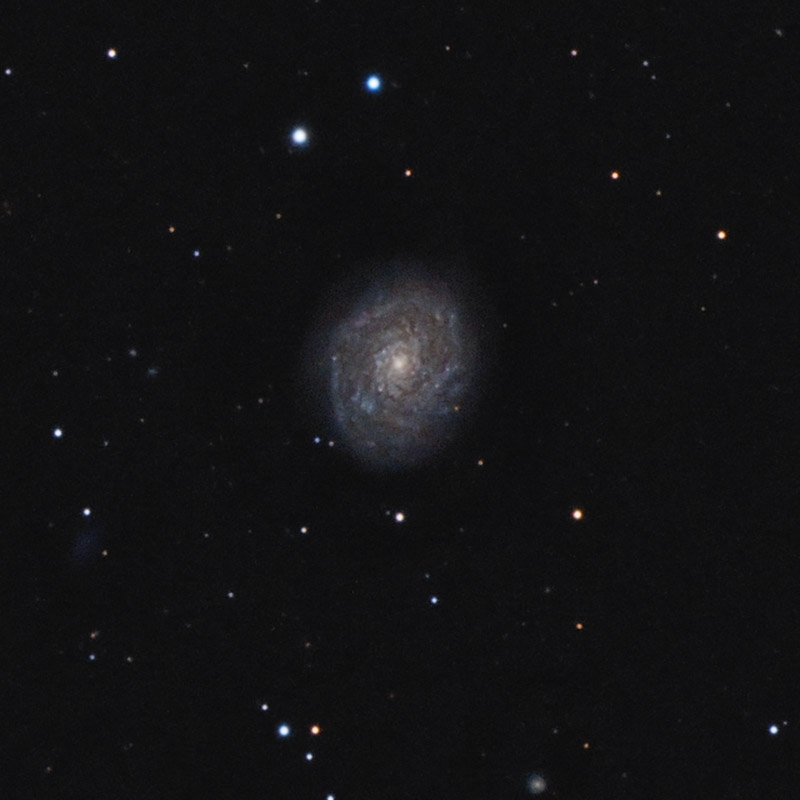 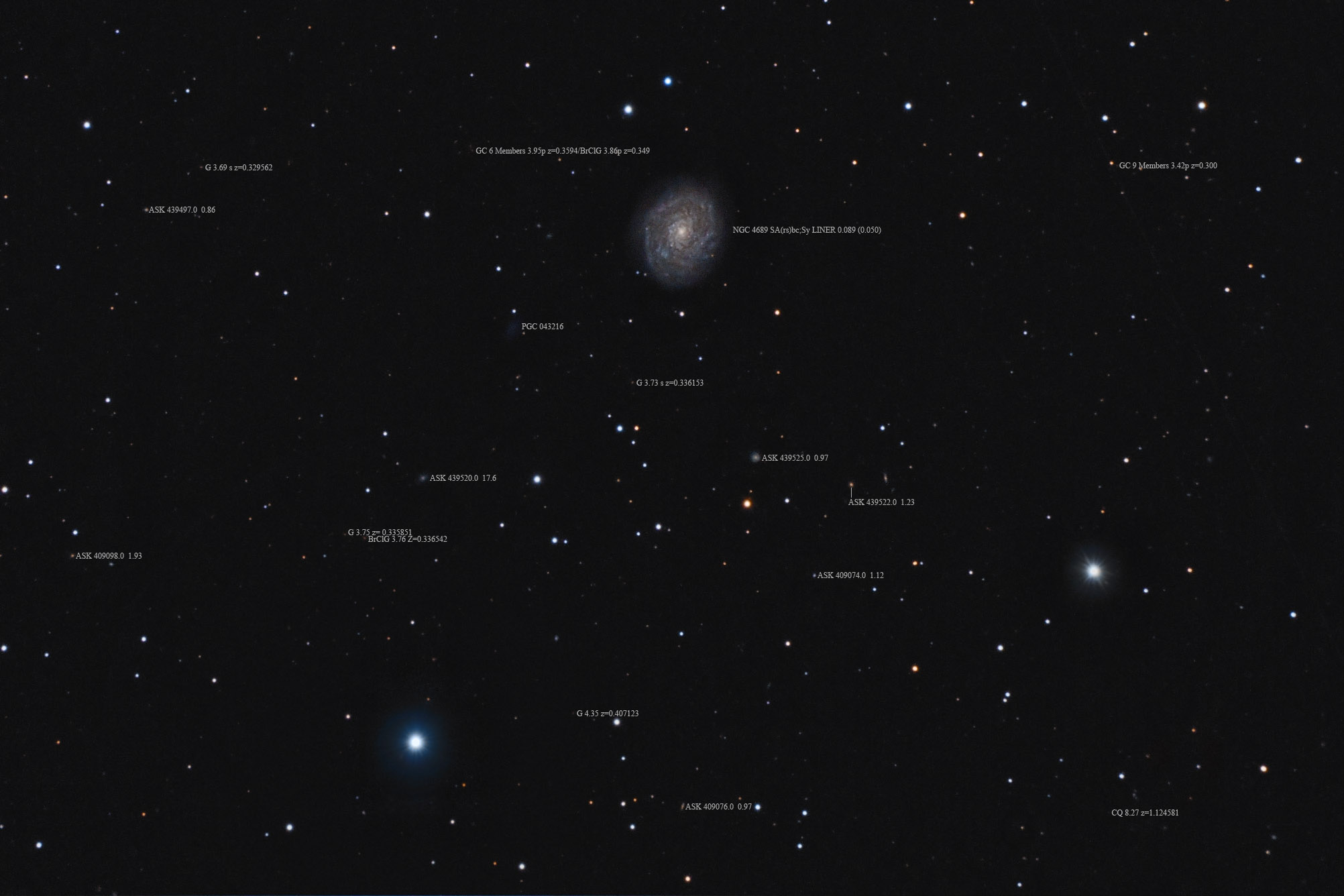