NGC 4710 is located about 60-66 million light-years from us in Coma Berenices. It is classed S0-a by the NGC project and SA(r)0+? by NED. The (r) refers to the ring it appears to contain. It is seen edge-on, same as NGC 4762 (also an S0) in my previous post. Both have a ring-like region around the core and an extended much fainter disk. The main difference between them is that NGC 4762 is missing the expected dust lane while NGC 4710 has enough dust for several such galaxies but it is confined to the bright box-like core region which is highly unusual. This galaxy has been studied by the Hubble Space Telescope. They have a good explanation of what\'s going on at this link: http://www.spacetelescope.org/news/heic0914/

It was discovered by William Herschel on March 21, 1784. My entry for the original H400 program on March 14, 1985 on a night hurt by humidity using my 10\" f/5 at 100x reads, \"Small, faint, circular puff of a galaxy with a small but not starlike nucleus. A star two minutes east is the same brightness as the nucleus.\" While I see the star in my image this refers to and it does appear similar to the core the rest of the description indicates I was only seeing the very center part of the galaxy. I didn\'t give a size estimate to tell anything more.

While the box like core region with the \"X\" shaped bright regions is hard to see in the HST image it is rather obvious in mine. The tips of the \"X\" show as bumps above and below the normal rectangular core region. While not mentioned at the HST site I\'ve seen other sources blame this on interaction with other galaxies. The Hamburger Galaxy NGC 3628 which is obviously interacting with its companion is a good example.

The other main galaxy in the image is IC 3806. Redshift puts it a bit further away at 79 million light-years. As redshift is greatly affected by random motion at this distance, its quite likely they are really both at about the same distance. IC 3806 is classed Sa? at NED. It has no obvious core but does have several bright regions near the core region. This would indicate a rather recent burst of star formation. Could that have occurred because of interaction with NGC 4710? No paper even hints at this as possible so apparently unlikely. Still, I can\'t help but wonder as both are irregular in some way. I\'m not talking anything major here just they got close enough in the past to trigger the needed star formation in both to create their odd core regions.

The odd dust structure of NGC 4710, however, makes me wonder if it isn\'t due to it \"digesting\" a small, very dusty galaxy ala the Black Eye Galaxy. I sure wish we knew what it looked like face on.

One quasar is seen near the southwest end of NGC 4710. Otherwise I was able to find little of interest in my image. One minor galaxy cluster WHL J124952.9+145548 with 13 members and at an estimated distance of 4.6 billion light-years light travel time is located near the bottom of the image a bit left of center. It\'s position is 1 second of arc different than the galaxy I\'ve marked it by in the annotated image. No distance is given for the galaxy however so that is represented as a question mark. 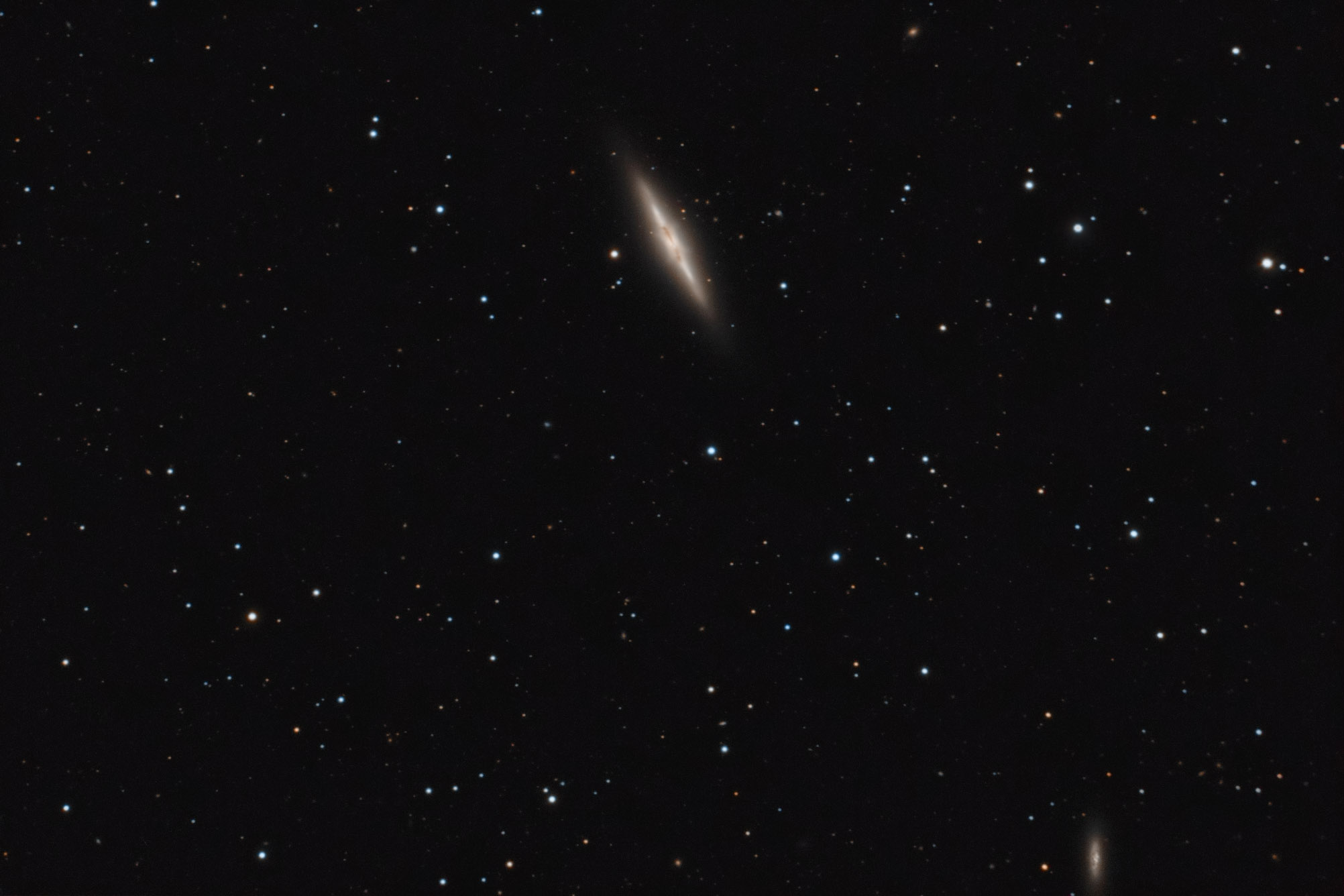 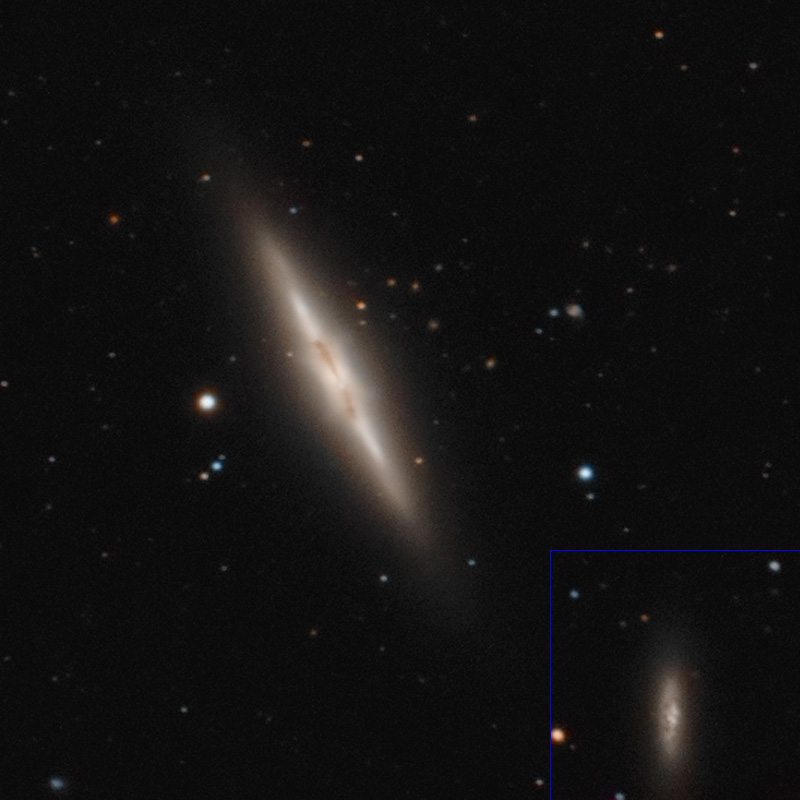 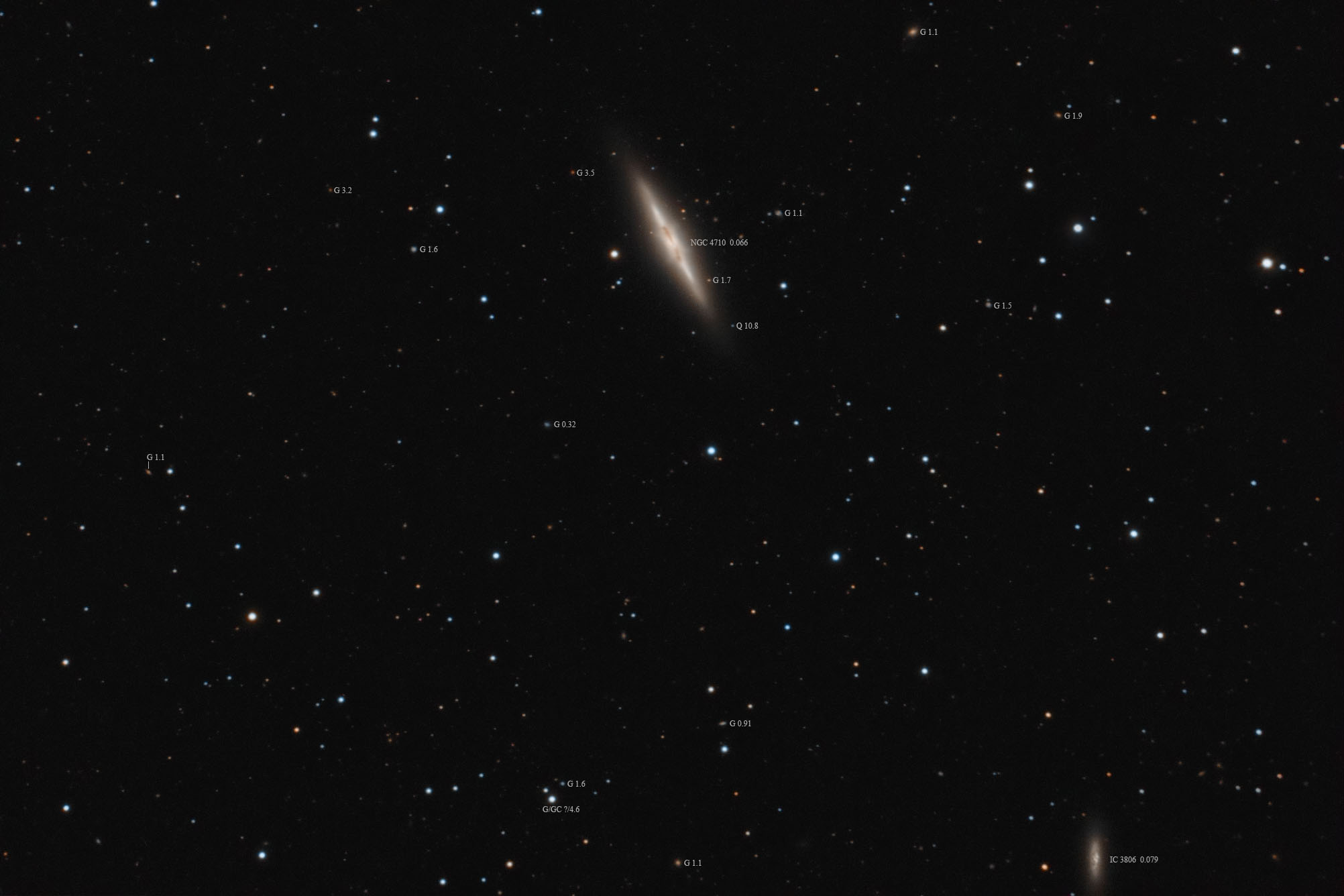