NGC 4800 is a nearly face-on spiral galaxy in Canes Venatici about 6 degrees west of M51. It is about 50 million light-years distant by redshift but nearly twice as distant, 94 million light-years by non-redshift measurements at NED. I have no idea which is closer to correct. Some sources said the distance was unknown or unavailable, one split the difference and said 72 million light-years. Nor did I find anything saying it was part of some galaxy local group. Though SIMBAD says it is a galaxy in a group of galaxies it doesn\'t tell me which they are.

Most online images (very few) show little detail in this galaxy, the exception is a couple HST images. I was rather surprised that it wasn\'t nearly as featureless as I had been led to believe from what few online amateur images I found of it. My reason for imaging it was simply that when nothing else is within my meridian based imaging window I\'m working on Herschel 1 and 2 program objects I can reach from my 47 north latitude. It was discovered by William Herschel on April 1, 1788. Appropriate as it fooled me into thinking it wasn\'t as interesting as it turned out to be. Even my comments from the H400 program gave it short shrift. My entry on the excellent night of April 29, 1984 at 150x with my 10\" f/5 only says \"Bright center, slightly elongated, hints of detail, beside a dim star.\" Usually, I wrote more than that.

The annotated image shows a couple of probable errors in NED\'s database. Southeast of NGC 4800 is a galaxy NED says has a redshift of 5.986982 putting it nearly 13 billion light-years distant. This is beyond most quasars, certainly most I can image. No way I could see a galaxy at that distance. Even Hubble\'s deep field rarely goes that deep. To the southwest is another with a redshift of 3.767008 that puts it just over 12 billion light-years distant. While my image shows it as round, the Sloan image shows it an edge on spiral. I only picked up the core. Using NED\'s length of 0.19 arcminutes it would be 660,000 light-years across. Huge by today\'s standards but downright beyond belief for the early universe. I\'m sure these distances are in error. Both are more distance by NED than any quasar in the image. I\'ve marked them with ??? For those wishing to look into this, they are SDSS J125456.22+462553.2 and SDSS J125403.49+462527.8 respectively. Oddly they indicate both have proven spectroscopic redshift determinations. 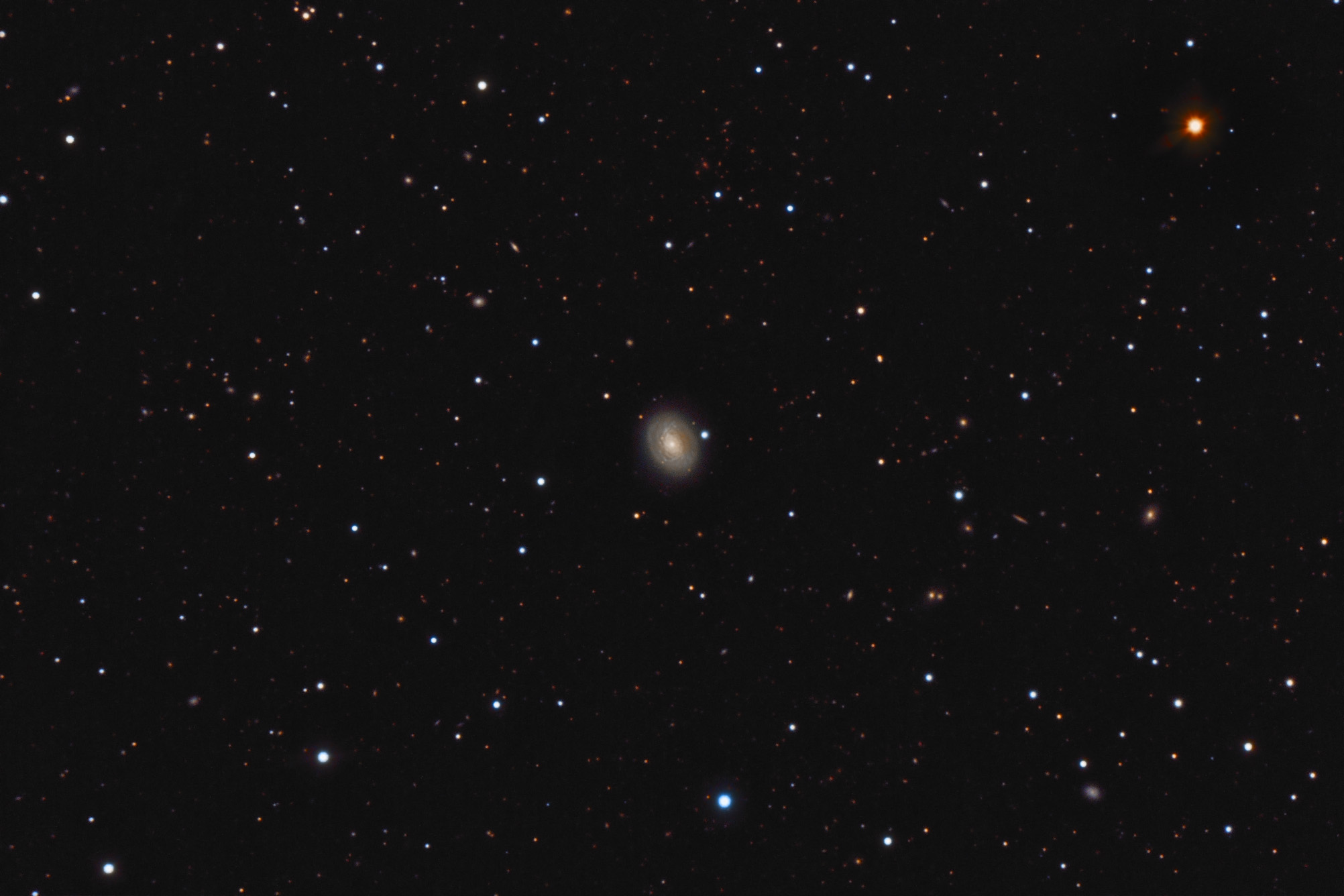 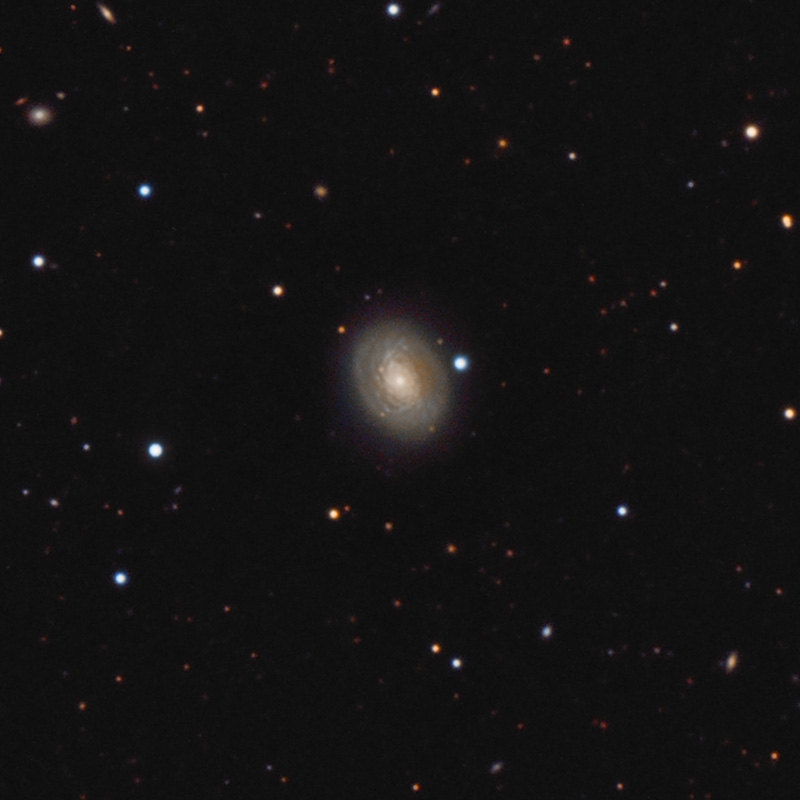 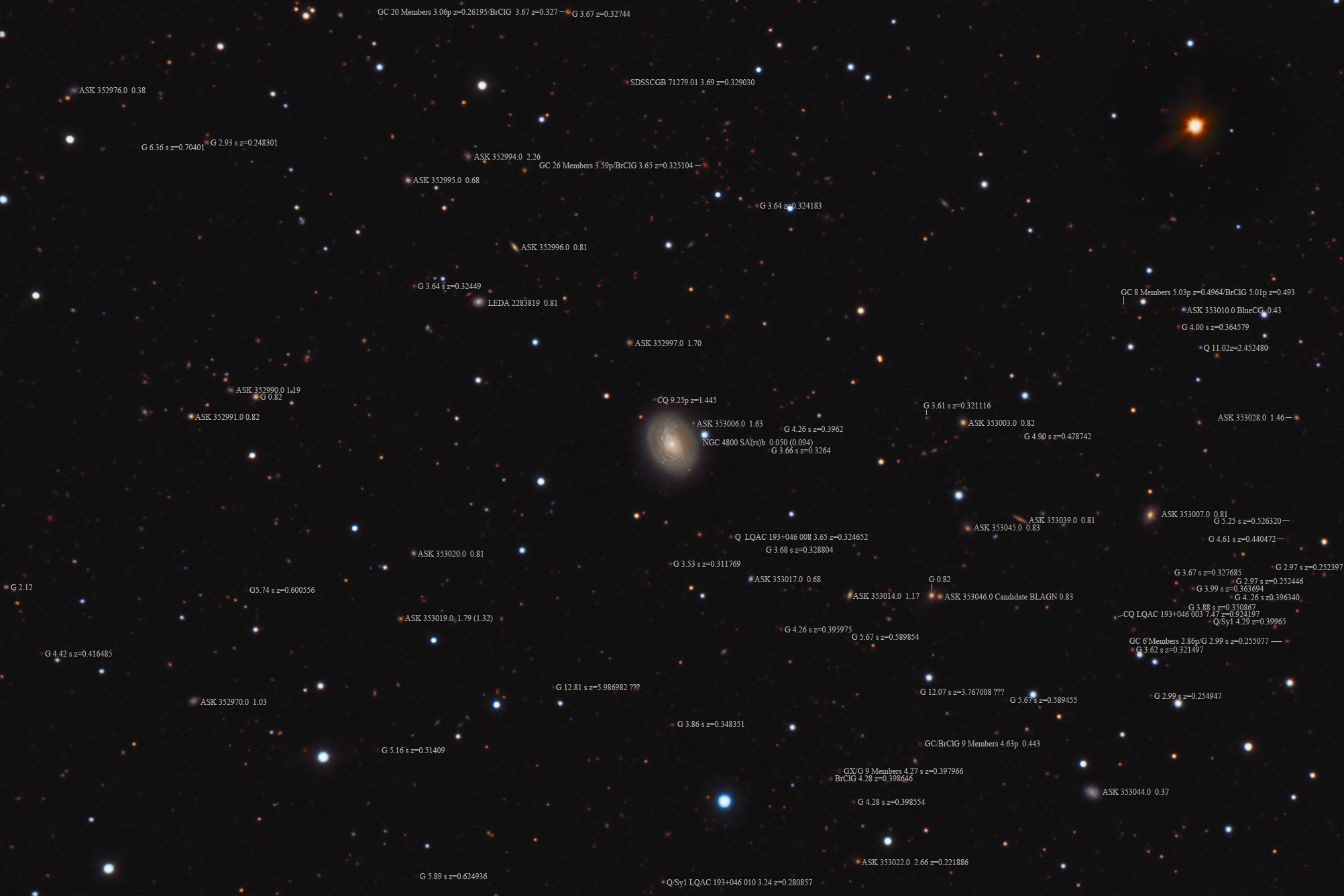