NGC 4845 is an apparently warped, rather red, spiral galaxy in central Virgo. Redshift puts it about 72 million light-years distant and Tully Fisher estimates agree rather closely. William Herschel discovered it on February 24, 1786. It is a rather flat galaxy lacking much of a central bulge. In fact, a significant part of its core is hidden behind a rather thin dust lane indicating how small the core is. The galaxy is thought to have a rather small black hole in its core to go along with its small central bulge being only 300,000 times that of our sun. Still, in January of 2011, it is thought it\'s black hole might have devoured a rogue planet that got too close to its core. You can read about it at this link: http://www.universetoday.com/101172/astronomers-watch-as-a-black-hole-eats-a-rogue-planet/#more-%20%20101172 which contains a link to the paper the article is based on.

NGC 4845 has another mystery. It might be long lost NGC 4910. It was found by William Herschel prior to NGC 4845 on January 24, 1784 but he admitted his coordinates were poor. Here\'s what the NGC Project says on this matter:

\"NGC 4910 may possibly be NGC 4845. There is nothing in WH\'s place, and Dreyer
quotes WH\'s note in the Scientific Papers: \"The place of this neb. is not
determined with accuracy.\" Dreyer adds, \"No modern observations known.\"

What caused the warping of NGC 4845? I found no papers even mentioning it is warped let alone discussing its warped nature. That mystery will remain unsolved for a while longer it appears. Or is the warp just an illusion? Looks real to my eye. NGC 4845 is one of the original Herschel 400 objects. All this gave me several reasons for putting it on my to-do list. My log entry dated April 23, 1985 using my 10\" f/5 at 50x on a fair night with a moon simply reads: \"Large, elongated galaxy, slightly brighter toward the center.\"

To the northeast is FGC 1530 a really flat blue galaxy seen edge on. Though no dust lane is seen. Redshift puts it 140 million light-years distant or twice the distance of NGC 4845. In this case, the Tully Fisher distance estimates for it are wildly discordant. One estimate from 2000 says it is only 5 million light-years away. Obviously, something is wrong with that estimate. Another from 2010 comes up with three results depending on the interpretation of the results. It gives 91, 92, 94 million light-years. That\'s only 65% of the distance redshift comes up with.

There were 5 asteroids in the image though 2 are so faint they didn\'t survive the JPEG compression. I left their location marked as some faint hint is still seen of them. Their details are in the annotated image. This field is one not covered well by catalogs other than those that reference galaxies by their coordinates. For those, I just use G or Q for Galaxy or Quasar without including their coordinate name as that is available by plate solving my image. UvES objects are listed as being quasar candidates with only photographic redshift measurements.

Conditions were poor for this one. While seeing was only somewhat below average this night, like the previous one had rapidly falling temperatures. So rapid that tube currents developed again flattening stars though not as much as the previous night. This put a lot of ice crystals into the air which dimmed the image as well as creating huge halos around bright stars, especially the brilliant F2 HD 112542. Even though it was only 7th magnitude its glow covered one third of the image making for processing nightmare. 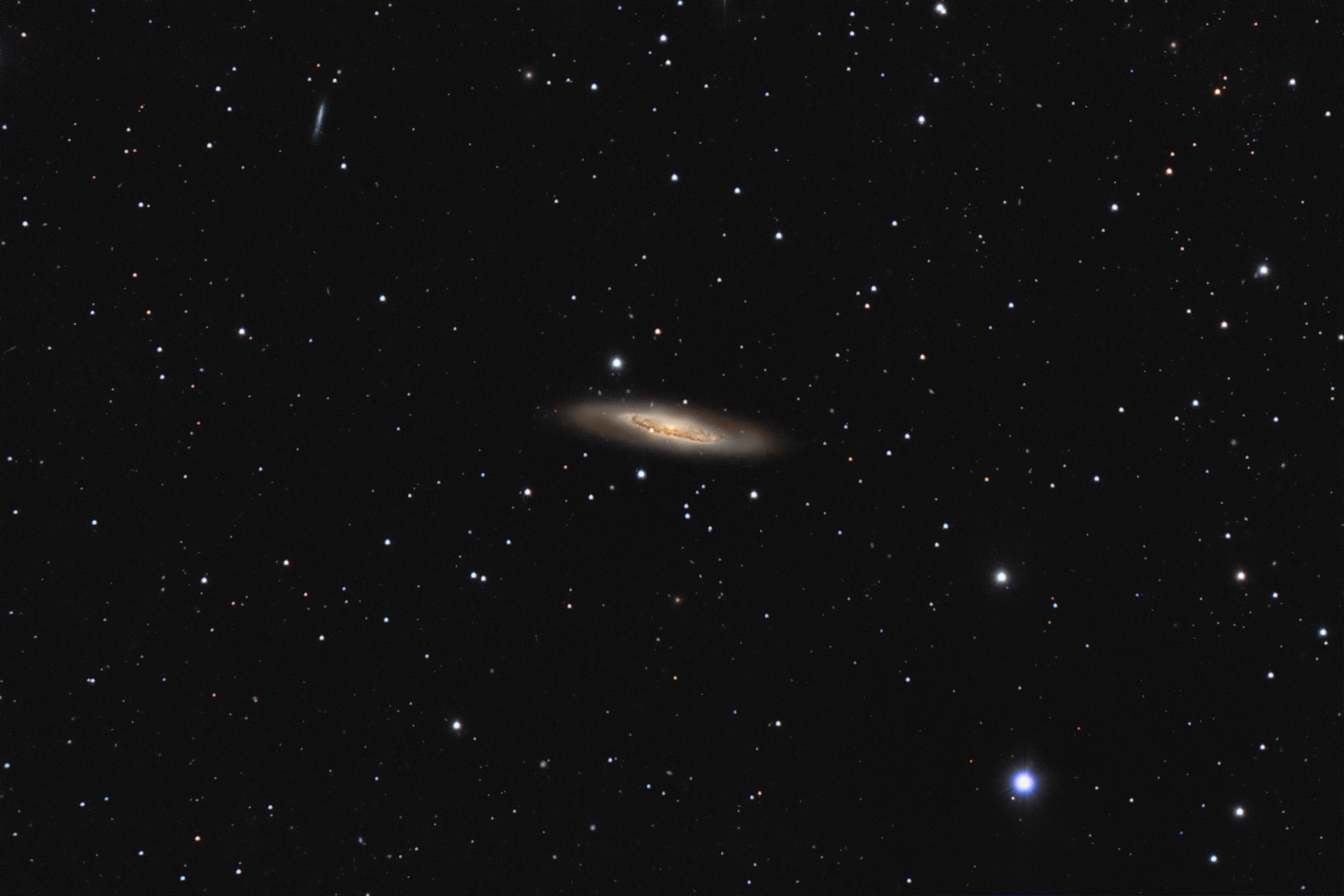 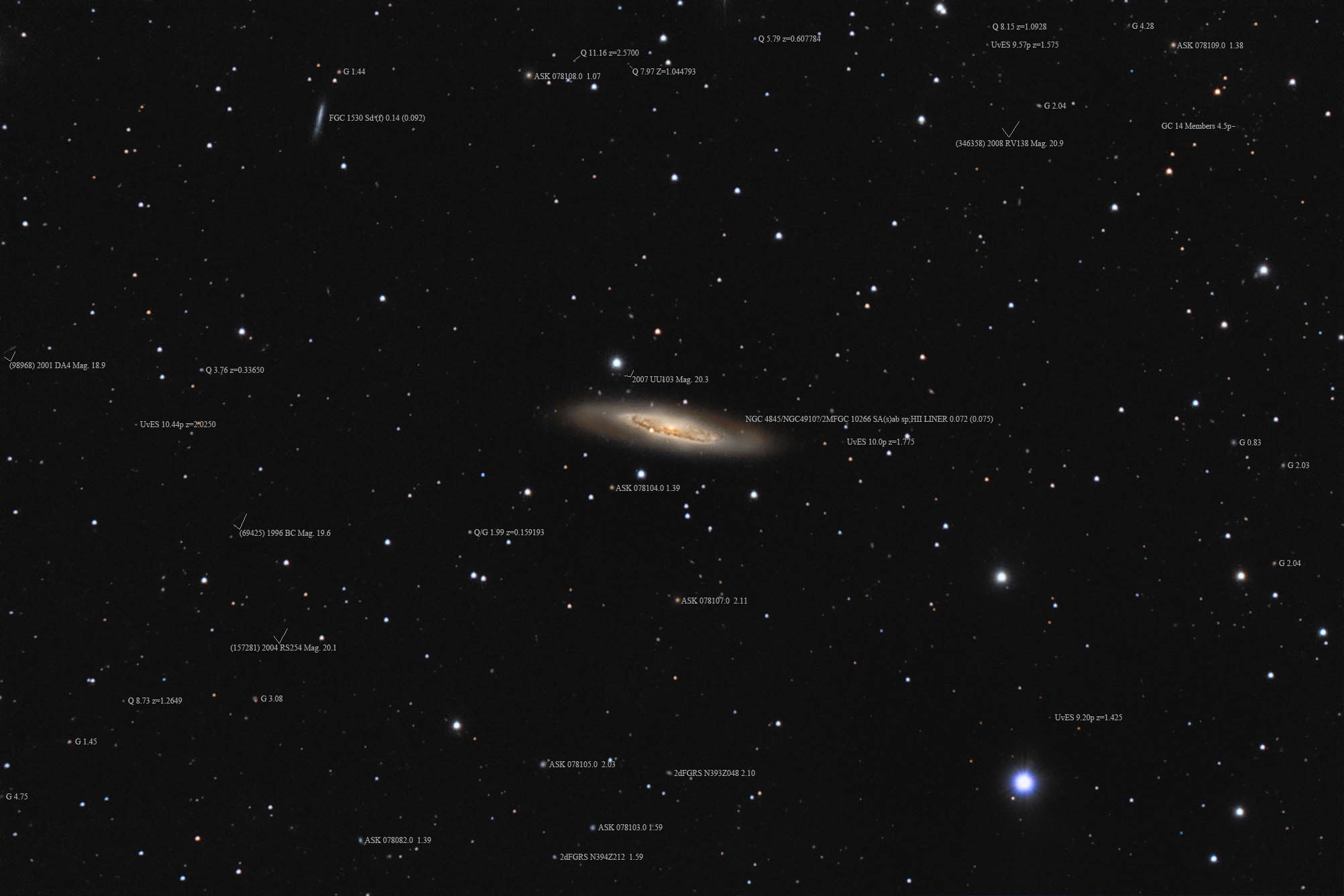