My main subject of this image was NGC 4893 in the image center but the field turned out to be far more interesting than I suspected. The field is in Canes Venatici about 1.5 degrees southeast of Cor Caroli, the constellation\'s brightest star. NGC 4893 is either one or two galaxies depending on who you read. The NGC Project considers it two galaxies made up of IC 4015 and IC 4016. NED and Seligman consider NGC 4893 to be only IC 4015. IC 4016 is sometimes known as NGC 4893A which Seligman calls stupid since it already has a perfectly valid IC designation. First time I recall that term used in naming galaxies. Actually, there\'s a third member of this group, starlike ASK 519181.0. NED refuses to classify any of these. The NGC Project says the northern galaxy is S? while Seligman gives it two classifications. Under the NGC 4893 number he says E2? but under the IC 4015 entry he says E2? pec?. The galaxy was first discovered by Heinrich d\'Arrest which Dreyer recorded as NGC 4893 on April 24, 1865. On March 21, 1903 Max Wolf found it but got the coordinates a bit off so Dryer recorded it as a separate entry in the IC catalog as 4015.

IC 4016 was found by Wolf at the same time and given the entry IC 4016. NED again doesn\'t classify it, The NGC Project says S? while Seligman gives two classifications for it. Under his discussion of NGC 4893, he says IC 4016 is S?? (that double question marks again) while under its own entry in the IC section of his web page he says it is S0? pec, only one question mark.

It is quite obvious these two galaxies and likely the third are interacting and have been highly distorted. It could be the starlike galaxy has lost all its outer stars leaving only a core. The mess is about a half billion light-years distant. I\'d love to have the HST look at this mess as I was unable to find any detailed images of this group. Measuring the size of these considering that they are in common halo is difficult. I measured the east-west halo diameter of each rather than the larger combined north-south halo. That gives a size of 104,000 light years for NGC 4893 and 40,000 for IC 4016.

Several other NGC galaxies are in the image. In the upper right corner is the classic spiral NGC 4868. It is listed as SAab? by NED, Sa by the NGC Project and type Sab? by Seligman. It was discovered by William Herschel on March 17, 1787. At only 220,000 light-years it is less than half the distance of the NGC 4893 group. While it appears much larger that is due to it being much closer. I measure it at just about 100,000 light-years in size. It isn\'t in either of the Herschel 400 observing programs.

Far larger in the upper left corner is NGC 4914 a huge shell elliptical galaxy. I had no idea of the shells as nothing I read before taking the image referred to them. The shells extend far out though they don\'t come through well in the color image due to my insufficient exposure time. If you look very closely you can see the northern shell extends to near the top of the frame. This makes the galaxy huge. I measure it at 380,000 light-years. If only the shells obvious in the color image are used it is still 234,000 light-years across. Classification confusion continues as NED and the NGC Project say simply E, Seligman says E4 while one paper says E5/S0. No one mentions the shells but the paper thinks it has found within the galaxy the remains of one it ate. Shells are the result of such a diet so they may be right. I couldn\'t find it however in my image and only a faint hint of it in the Sloan image. It was discovered by William Herschel the same night as NGC 4868 and is in the second Herschel 400 observing program. Unfortunately, my notes for that program didn\'t survive the move up to Minnesota.

We aren\'t done with NGC galaxies in the image. In the lower right corner is NGC 4870. NED again refuses to classify it. The NGC Project says S while Seligman says S(rs)a?. It was discovered by Lawrence Parsons on April 1, 1878. I measure it at 137,000 light-years in size. At nearly a half billion light-years distant it is likely a member of the NGC 4893 group. Its disk has an odd gap in the northern half not seen in the southern half.

IC 4027 as a barred spiral that too is likely a member of the NGC 4893 group. While NED doesn\'t classify it Seligman says SB0?? (that double question marks again). Max Wolf had a very productive night on March 21, 1903 having found this and the next three IC galaxies all as well as others mentioned above that night. I measure its size at about 72,000 light-years.

Next is IC 4034 which only Seligman classifies saying it is E0?? trying to drive me nuts with that double question mark again. I measure its size at 56,000 light-years. At 400 million light-years it apparently is not part of either of the two main groups in this image but does have a companion, IC 4038. Only Seligman classifies it and to drive me insane says it is S0??. It has some faint extensions that give it a somewhat larger size of a bit over 100,000 light-years.

The last IC galaxy in the image is IC 4043. Finally, NED classifies it saying Sc-IRR. Apparently, it can\'t make up its mind. I can\'t recall that combination before. Seligman has the same indecision as he says SBd/Irr?. At least only one question mark this time. It appears to be part of the group of much larger galaxies at 220 million light-years. I measure it at 74,000 light-years in diameter

To add to the confusion there\'s a neat low surface brightness, very blue galaxy on the eastern side of the image near LEDA 2094904 (another galaxy likely part of the NGC 4893 group). This galaxy isn\'t listed in any survey I have. Yet NED shows an entry in the Sloan survey for what to me looks like a piece of a north going arm. I\'ve noted it in the annotated image though the galaxy itself gets a question mark (only one) since I can\'t find it anyplace. Well below this object is LEDA 2092313 a dwarf likely related to the others at about 220 million light-years. it has a bright star cloud at its southern end. At first, I thought it might be a field star but I\'ve verified it is a star cloud in the galaxy. There\'s lots more to explore in this image but it would take a book to cover it all and I\'ve likely lost 99% of you by now anyway. 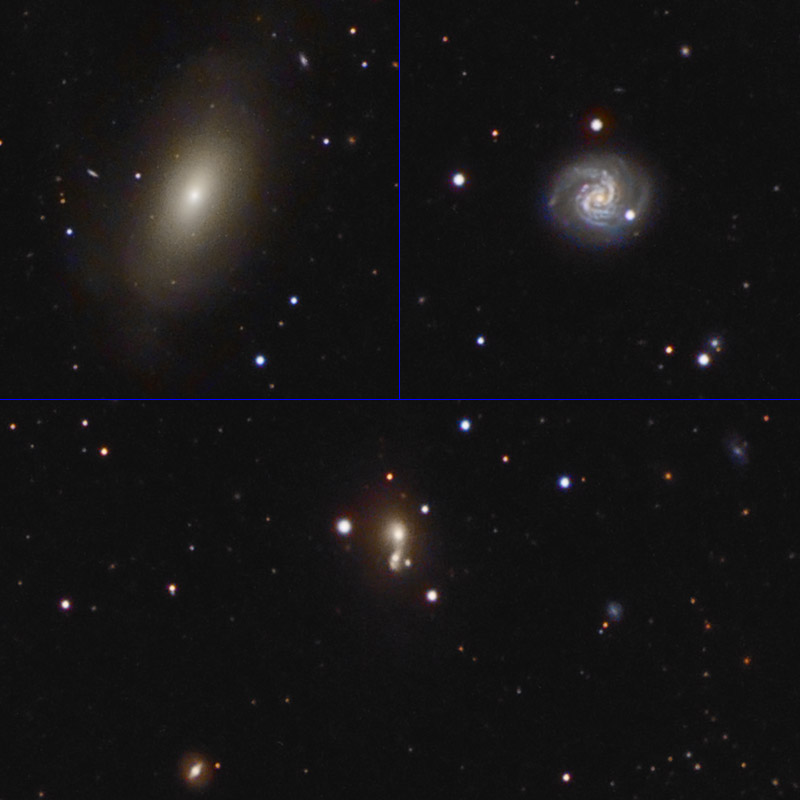 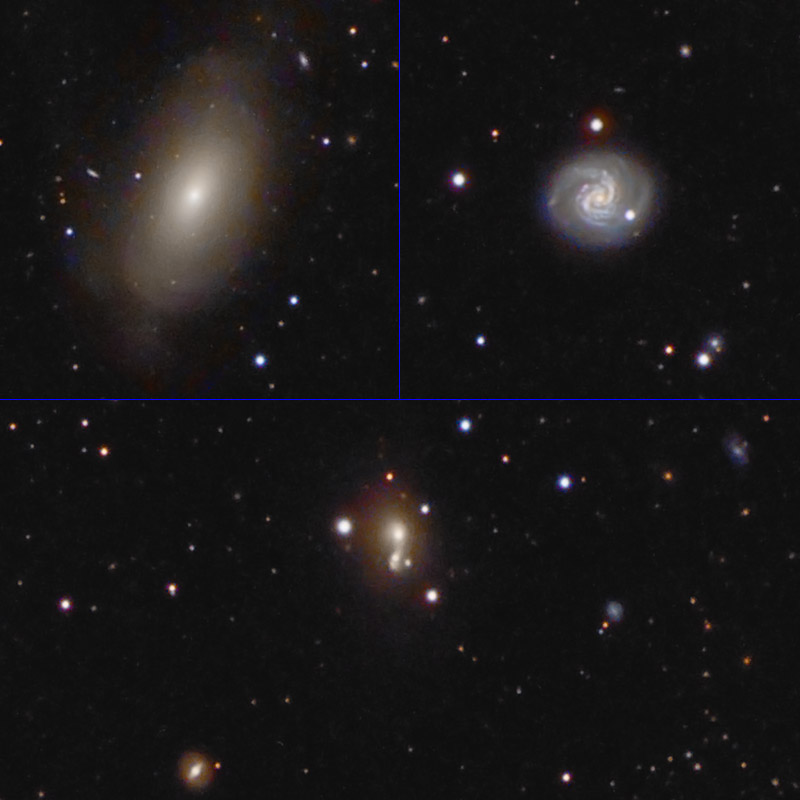 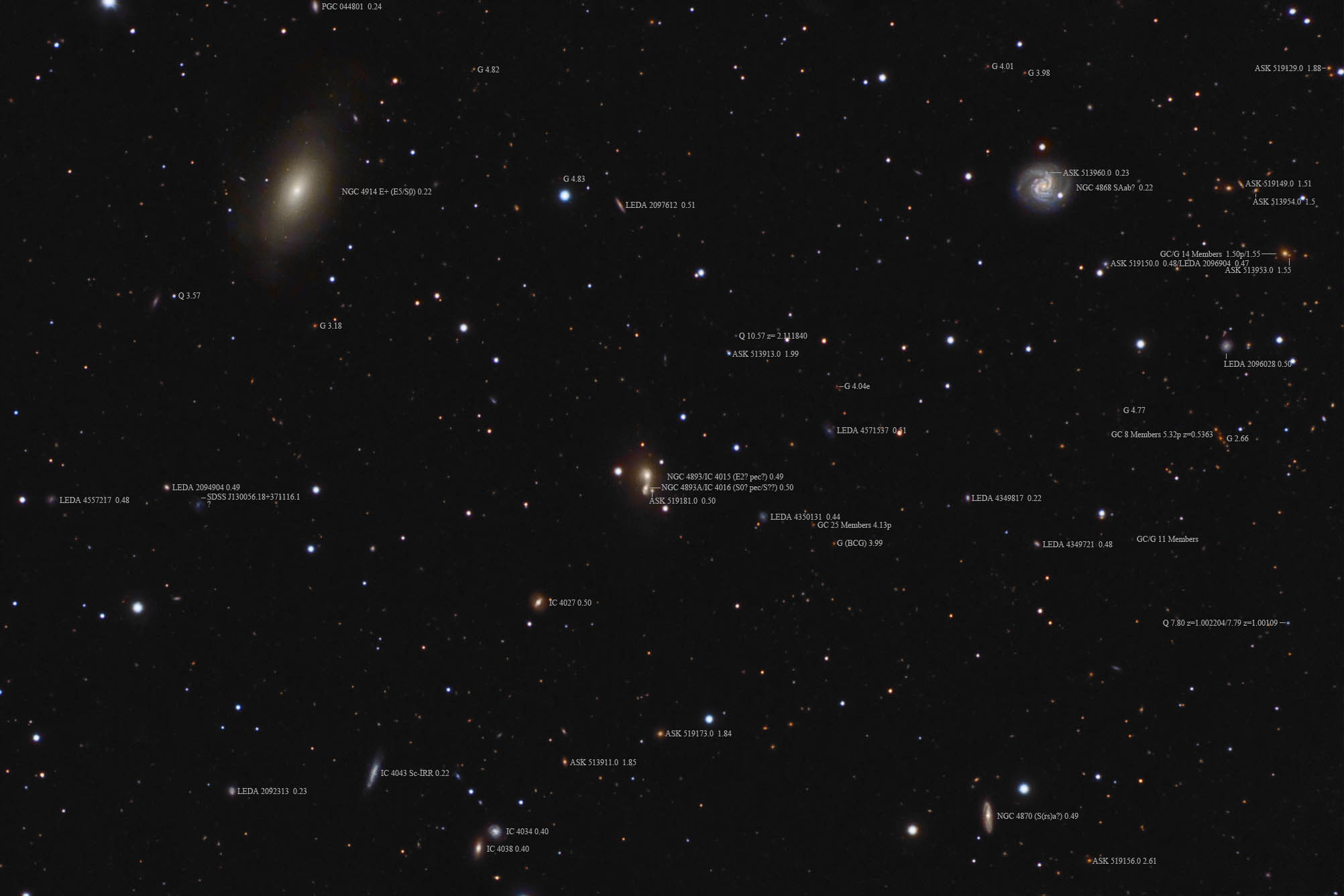