NGC 4938 is a barred spiral in northern Canes Venatici about 380 million light-years distant. It sits in front of a distant galaxy group about one and a half billion light-years distant. What drew my attention is that the southern part of the galaxy is much brighter than the northern though the features, if you ignore brightness, is rather symmetrical. It was discovered by John Herschel on February 17, 1831. I measure its diameter at about 88,000 light-years.

Also drawing my attention to this field is UGC 08168 near the top of my image. It appears to be the result of a collision of two galaxies as it has two red cores each with a huge plume or arm. To the west of the lower core is a huge blue star cloud. I suspect it was created by the collision but it may just be a third galaxy. I doubt that it is. This collision is unrelated to NGC 4938 being nearly 160 million light-years further away. It must be a spectacular sight for any beings much closer to it. The size of this train wreck is about 195,000 light-years including the plumes. I suspect the individual galaxies were less than half this size prior to their smash-up that scattered stars far and wide.

There appear to be two galaxy clusters listed in my field. Both are at a distance of about 1.5 billion light-years and contain lots of galaxies spread over a wide area. They do overlap. Could this just be one cluster but with Zwicky and Abell not agreeing as to the position of its core? Neither show a galaxy, large or small, at the center point of the clusters. The Zwicky cluster appears to be behind NGC 4938. One galaxy can be seen through NGC 4938 that is listed as being the Bright Cluster Galaxy for the small cluster of 23 galaxies. The cluster is listed as being 1.4 billion light-years distant though by some error the bright cluster galaxy is shown at a distance of only 380 million light-years, the same as NGC 4938. It can\'t be both a bright cluster galaxy and a tiny dwarf being eaten by NGC 4938. That Asian astronomer Sum Ting Wong seems to be involved here. He didn\'t stop there, however. Another galaxy just south of NGC 4938 is listed at the position of a 13 member group. The group is at 1.45 billion light-years while the galaxy is again at 38 million light-years. Both the bright galaxies at this 380 million light-year distance are listed as having their distance determined by the Friend of a Friend method. I don\'t understand this method. It appears they just assumed these are at the same distance of NGC 4938 and ignored others considering them members of more distant groups. I\'d think this discrepancy would merit at least a mention at NED but I found nothing on it. I think it quite likely these small groups are parts of the larger Zwicky and Abell clusters. 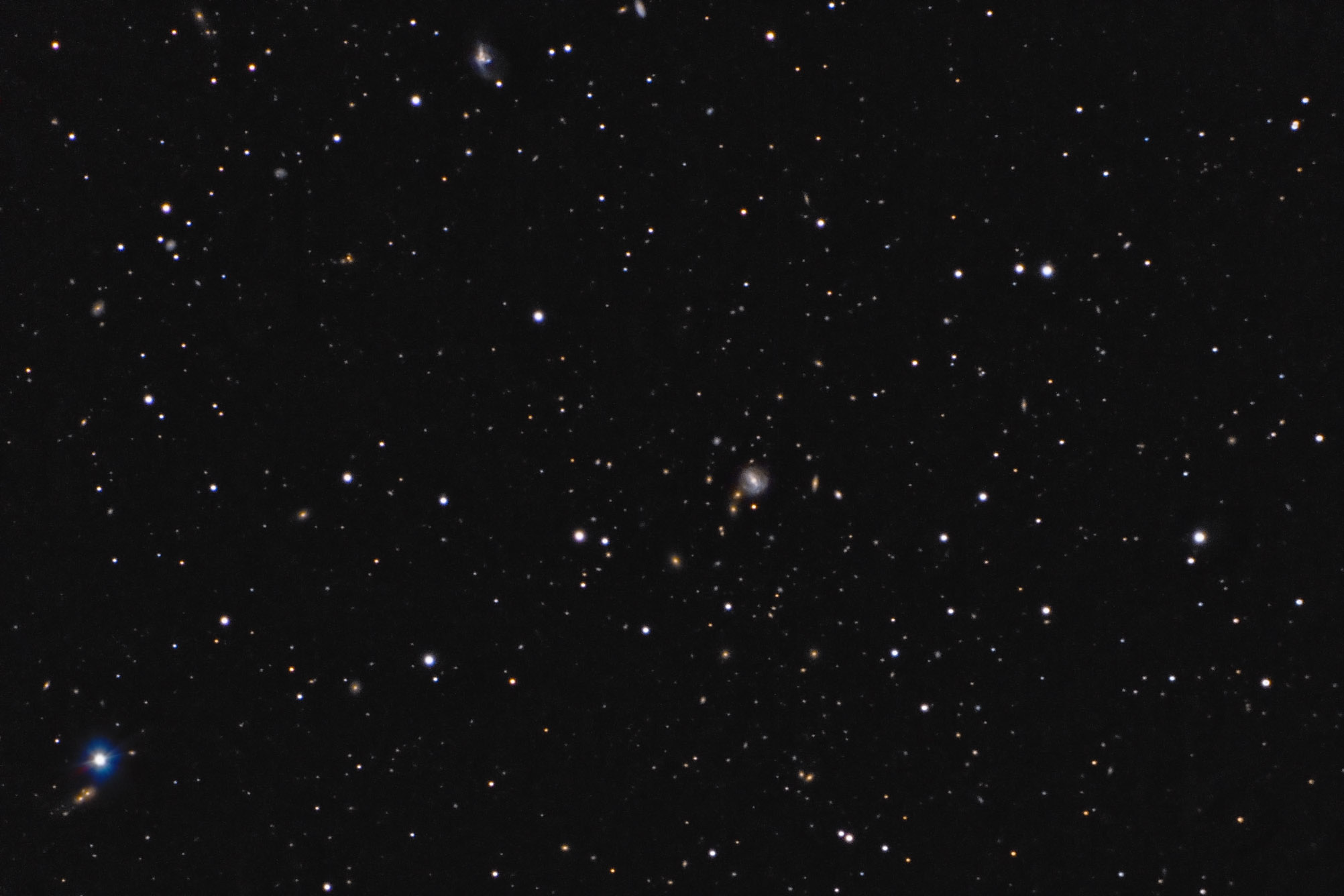 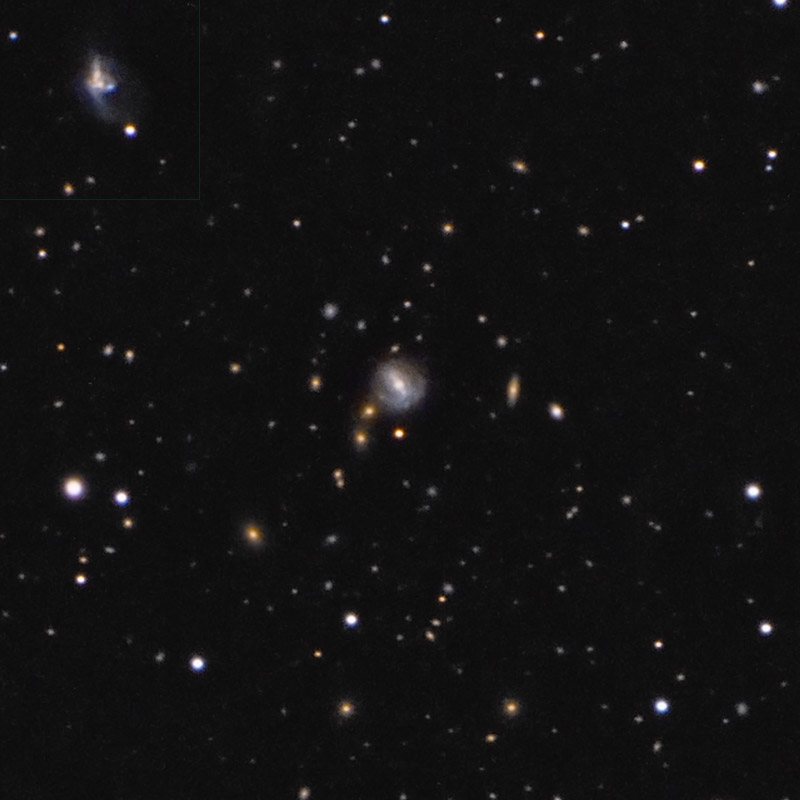 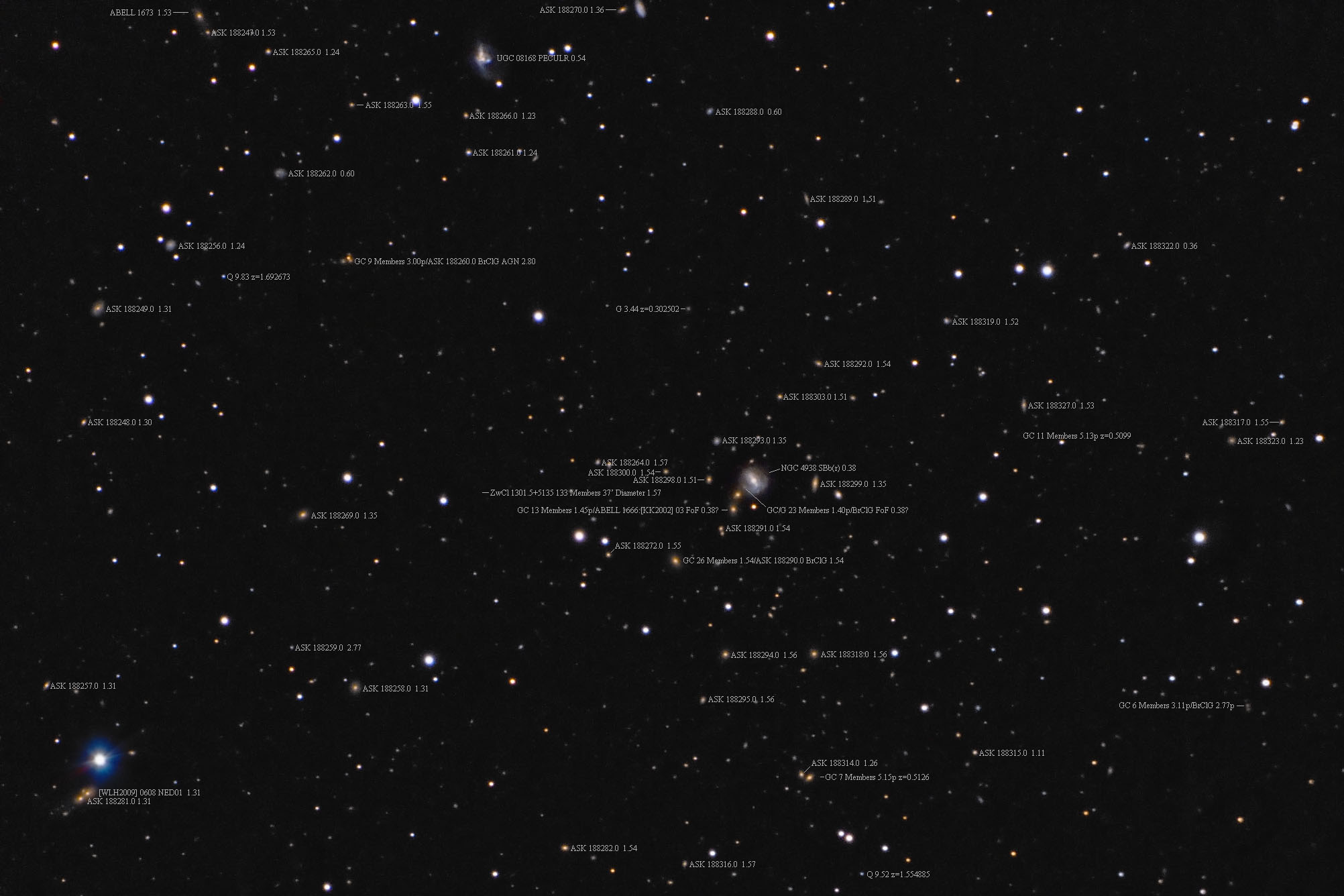