NGC 4939 is another rarely seen face on spiral galaxy, about 160,000 light-years distant by redshift, located in southern Virgo about 5 degrees west of Spica and 6 degrees east of the far more well known Sombrero Galaxy, M104. It was discovered by William Herschel on March 25, 1786 and is in the second Herschel 400 Observing Program. It made my to-do list for both being a very lonely but disturbed looking face on spiral and for being on the that Herschel 400 list. At -10 degrees I need a very good night for it and this year those just didn\'t happen. Seeing turned awful right after I started the run but since I was sleeping I didn\'t know that until I went to process it.

I say it looks disturbed because in higher resolution images than I could achieve this night it is crossed by several very straight dark dust lanes. I\'d hoped to pick up the stronger ones. Instead, two of the strongest blended together to make the vertical dark line just to the right of the core region. Problem is I also see hints of one to the left of the core that doesn\'t show on high-resolution images so has to be just noise. It could be the other one is also just noise in my image that happens to coincide with the location of the lane that really does exist there. I need a much better night though with so many good objects in this area still on my to-do list I can\'t see that happening any time soon.

While NED classifies NGC 4939 as SA(s)bc with a Seyfert 2 active core the de Vaucouleurs Atlas of Galaxy Types uses it as an example for a SAB(r)bc galaxy. That is having characteristics of both a spiral and barred spiral. Notes at NED also see a bar hidden in the bright reddish oval core region. The NGC Project, like NED, doesn\'t see a bar structure. At first glance the spiral arm structure looks rather normal for a wide open two arm spiral but on closer inspection it appears far more disorganized with the southernmost wide arm and the one inside it both coming off the same inner arm structure while the tighter arm fades away then reappears as the northern arm that doesn\'t begin to match the far southern going arm in structure nor match the angle of the arm it appears to be related to. The fade then reappearance of the arm at this odd angle gives the galaxy the appearance of being a three-armed spiral. Yet it is so lonely with nothing seen at its distance in the frame or for a wide area around it, it seems an unlikely candidate for having had an encounter that could account for this. Apparently, it is just natural for this somewhat peculiar galaxy.

NED lists only extremely distant galaxies so faint they barely show in my very poor data. For that reason, I didn\'t prepare an annotated image. Not only did the seeing go to bad a fog developed over my lake that raised my background level by a factor of 5 to 10 which would have required a lot more and shorter subs to have cut through. Since I was unaware of this that didn\'t happen. While the blue frames were taken before the fog but at the time of the worst seeing, I had a large discrepancy in star sizes for the color data. Green was so hit by fog only one frame was sort of usable. The other useless. Most of the green data for this one is pseudo green I created with my own technique leaving the color a bit suspect. That\'s the best I could do finding the problem now that the sun is in Virgo when I went to process the image. That made it impossible to get more data. 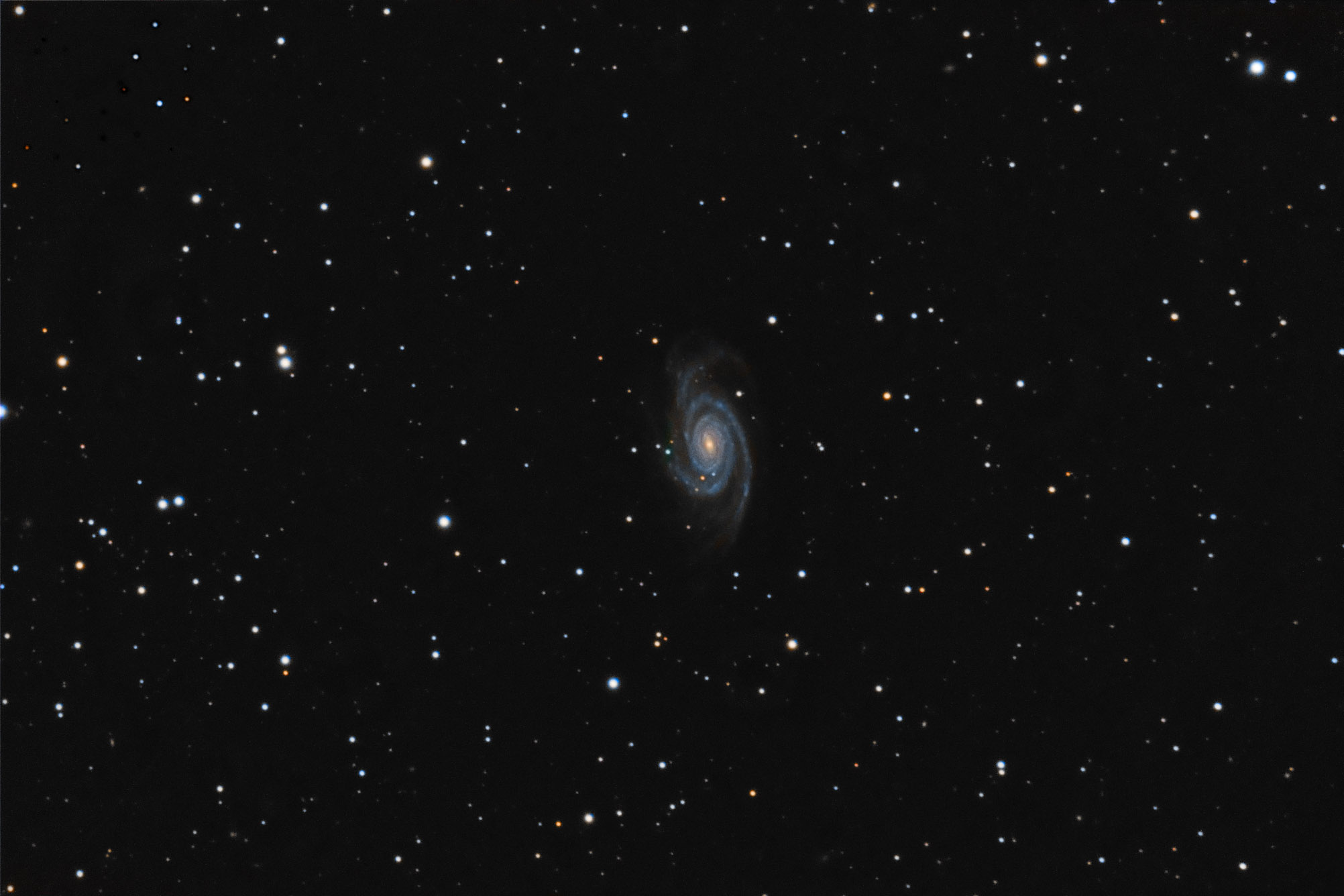