NGC 5149 and 5154 are a pair of galaxies in Canes Venatici discovered by William Herschel on May 1, 1785. They are about 270 million light-years distant by redshift measurement. They don\'t appear to be interacting though if they are truly at the same distance then they are only 470,000 light-years apart. More likely there is a few million light-year difference in their distance making the separation greater. Neither are in the H400 programs.

NGC 5149 is classified as SBbc by NED and Seligman but SBb by the NGC project. It is rather strange as the core is elongated north and south while the arms, which usually come off the ends come off the east and west sides. Both sides separate the arm from the core with a dust lane that is much stronger on the west side than the east side. The inner arm structure is rather chaotic as well. Though not in a way indicating interaction with its neighbor. At least I found no papers suggesting they were an interacting pair. I measure its size at about 125,000 light-years making it a bit larger than our galaxy which is considered a big one.

NGC 5154 is a face on spiral classified as Scd: and Scd? by Seligman. The colon is about the same as a question mark so they agree. The NGC project, however, says Sc. To me that\'s a better classification. I suppose it is the southern arm that is pulled out some that accounts for the cd? classification. That arm is very odd. It doesn\'t seem to come from either of the other two or the inner ring. Instead, it starts from a blue star cloud and arcs out rather comet-like. Seemingly not part of the galaxy. Maybe it is the remains of something it is eating but with the very blue \"head\" I doubt that is the case. I measure it slightly larger at about 127,000 light-years. So they are both about the same actual size.

There\'s a third galaxy also at the 270 million light-year distance. It is northeast of NGC 5154, ASK 530316.0. I found no classification for it. I\'d call it an irregular blue galaxy. While it appears small that is mostly due to its distance as it is a respectable 31 million light-years across. I\'d love to see a closeup from the HST of this one.

The image contains some quasars (Q) and some candidate quasars (UvES and CQ). The candidates only have a photographic redshift. Some of these are just stars and will be rejected as candidates but I have no way of knowing which. I find those labeled UvES tend to confirm as quasars while those labeled CQ fail more often. This is only my observation and it may be skewed by many factors I\'m not aware of.

There\'s an interesting little galaxy group NED calls a Galaxy Cluster so it is labeled GC but with only 5 or 6 members I\'d call it a galaxy group. While NED lists 6 members, I see only 5 in a nice little chain on the west side of my image. Looking at the deeper SLOAN image I again only see 5. There is an anonymous galaxy to the upper left east of ASK 530347.0 that might be the 6th I suppose. Without a size given for the group, I can\'t tell. It looks a bit closer to my eye but that is often misled. NED lists its distance of 1.77 billion light-years as an estimate. How that estimate is made I have no idea.

Conditions were poor for this one and I had to throw out one luminance frame though my system again missed this. It is supposed to retake such frames but lately, I\'m noticing it isn\'t doing so. I can\'t figure out why. Actually, it threw out two but only took one replacement same as my previous post. Also, one green had to be thrown out as well and it wasn\'t retaken either. I have to figure out why I\'m not retaking these clouded out duds. At least green is the least important color so it didn\'t hurt the color in any significant way that I can detect. 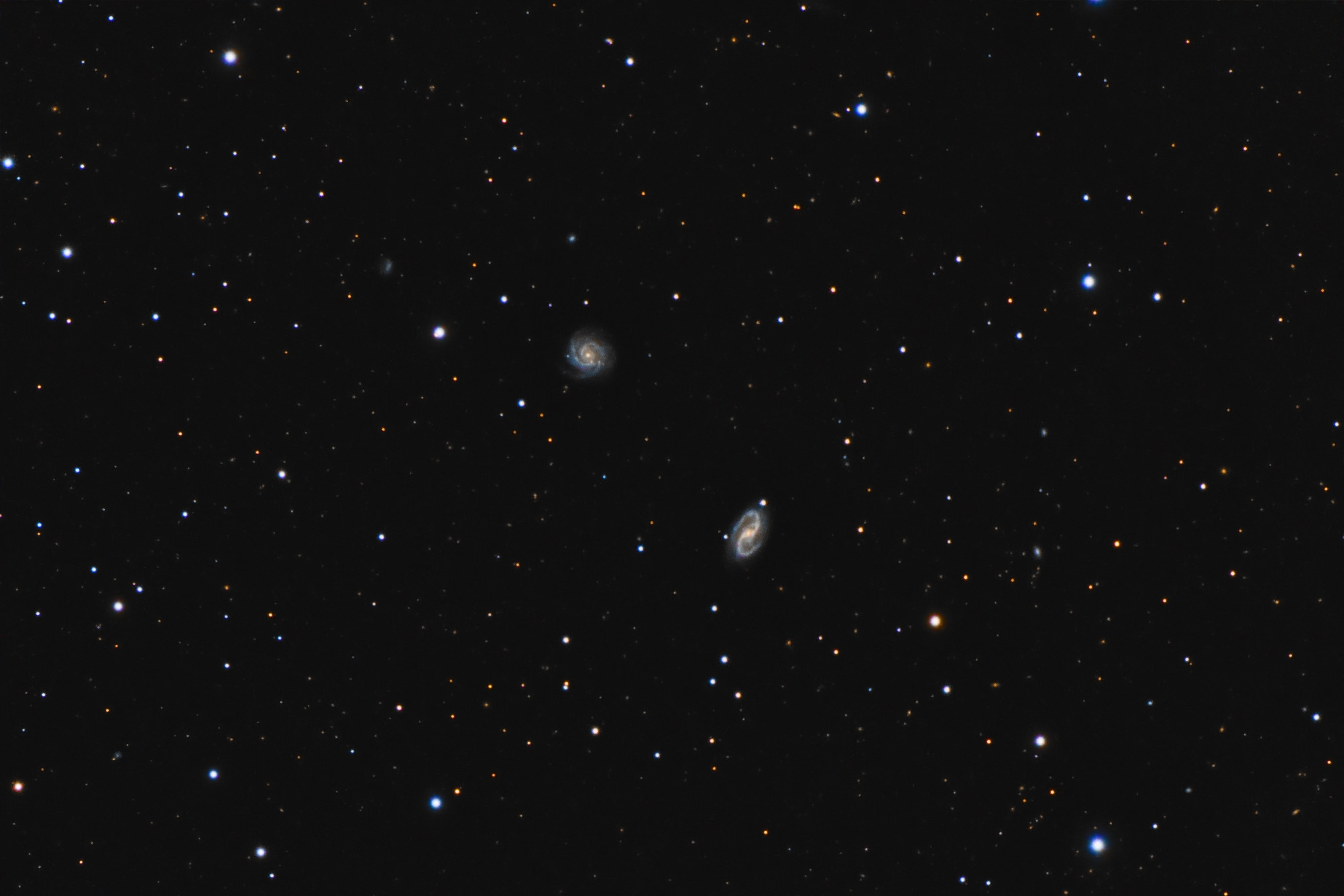 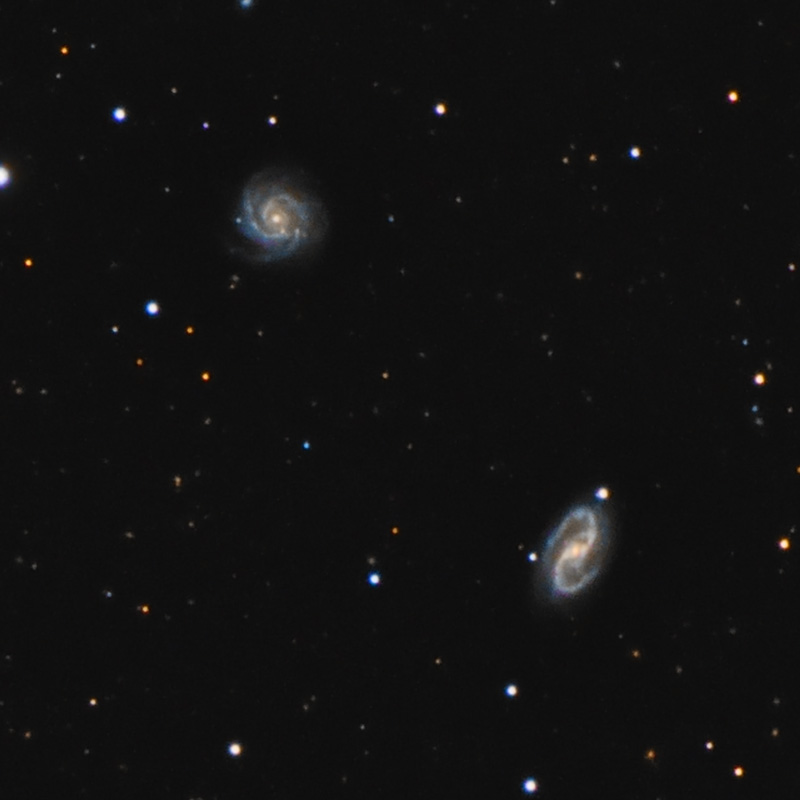 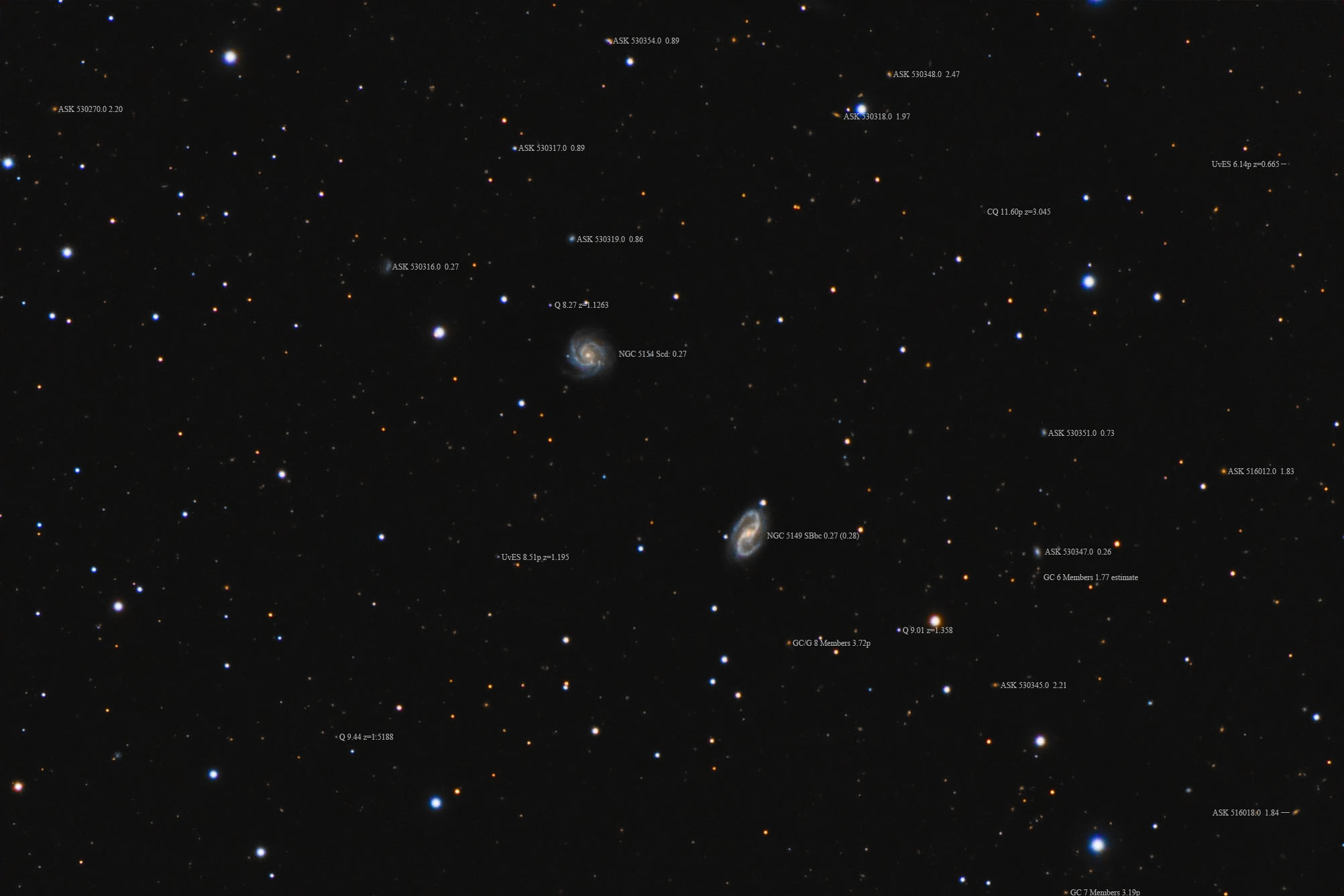