NGC 5174 is an immense spiral galaxy in northern Virgo about 320 million light-years distant. I measure its size as a bit over 360,000 light-years ( I could argue for 420,000 light-years including parts seen in the FITS but not the processed image) which makes it one of the largest known spiral galaxies though I found no one mentioning this. When I went to frame the shot 71 Virginis was a problem. I moved the field north to put it out of the field but that created a nasty ghost image that wouldn\'t go away until I moved the field well north. That brought in what appeared to be an interesting galaxy and got rid of the ghost. Turned out a huge glare from the star still came into the field and partly across the western side of the galaxy. Also, that \"interesting\" galaxy turned out to be a rather featureless red and dead S0 galaxy. It took a lot of processing to get rid of the glare from 71 Virginis but in the end, it turned out fairly well.

NGC 5174 was discovered by William Herschel March 15, 1784 but is not in either Herschel 400 observing program. Later Lewis Swift saw the galaxy on April 19, 1887 but got the coordinates a bit wrong. This caused it to be listed as NGC 5162 in the NGC by Dryer giving it two NGC entries. But Herschel isn\'t blameless either in that he saw the galaxy as double. It is thought he saw the star in the southern part of the galaxy that is now NGC 5175. Though some make the argument that he was referring to the HII region to the north that appears as a much dimmer blue object in my image. Many doubt that was within Herschel\'s capabilities, however. I would have to agree. NED classifies it as Scd: while the NGC project and Seligman say Sc. Quite a few other galaxies at about its distance are seen in the image, all much smaller, however.

There\'s a strange looking galaxy to the west of NGC 5174, ASK 411027.0. It is much smaller and classified as Scd by NED. It certainly doesn\'t appear to be one in my image. It looks like a barred spiral with one arm. Even the Sloan image of it looks much the same. Along the west edge is a pair of galaxies, one spherical, ASK 511065.0 at 2.04 billion light-years and the other a sliver of a galaxy just to its right. That one isn\'t listed at NED or SIMBAD. Why it is overlooked I don\'t know.

This image was jinxed in another way. Seems somehow I forgot to turn on the cooling fan. Since it was a rather cold night at first all was well but then the ambient temperature rose and I lost regulated cooling. One green and one red frame had such a temperature drift (10C) across the images I couldn\'t even calibrate them and finally had to toss them. One luminance frame was hurt a well with a 2C drop but I was able to recreate that close enough to make it work but needed more noise reduction than I\'d have normally used by quite a margin. Fortunately, I could limit that to the background for the most part. 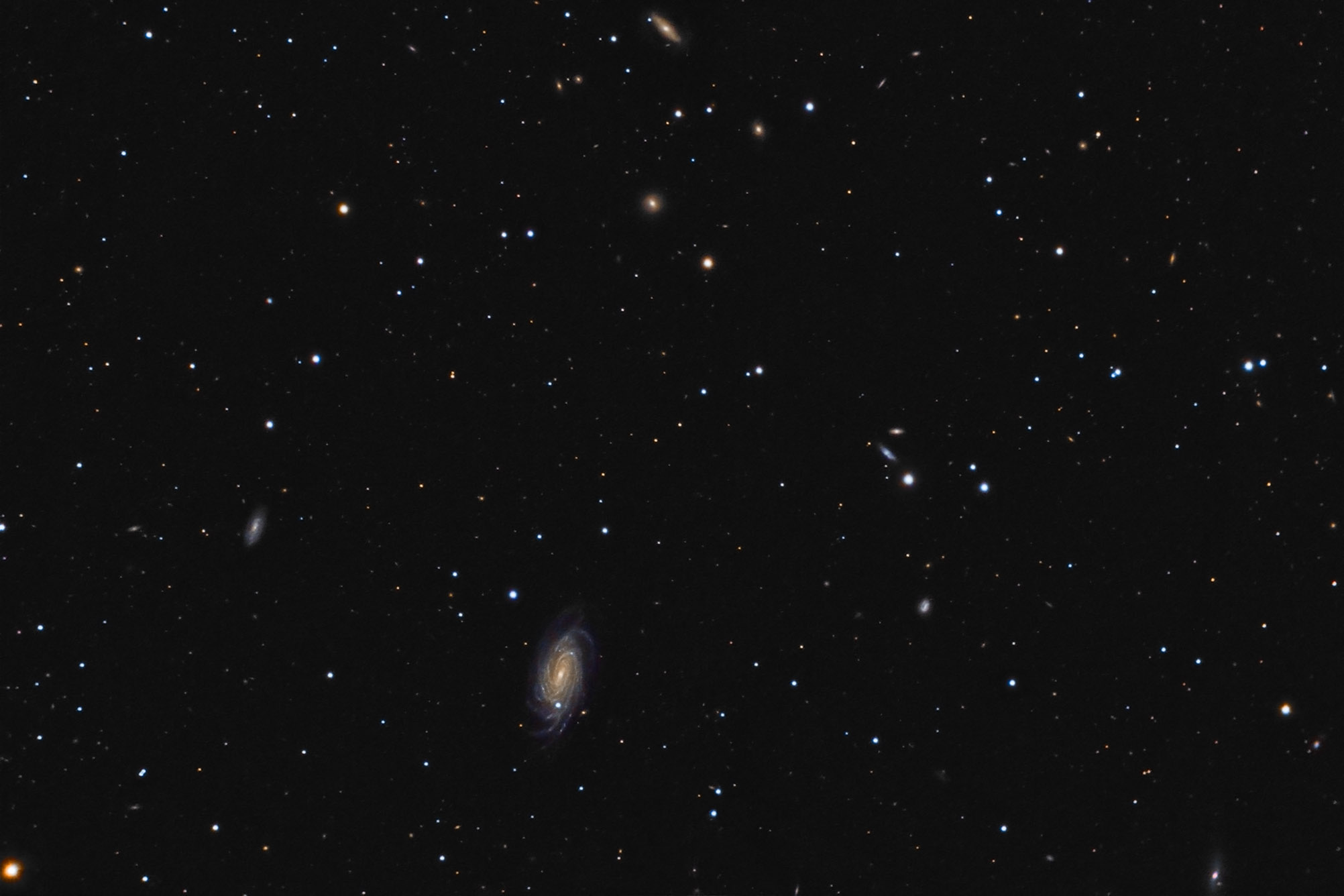 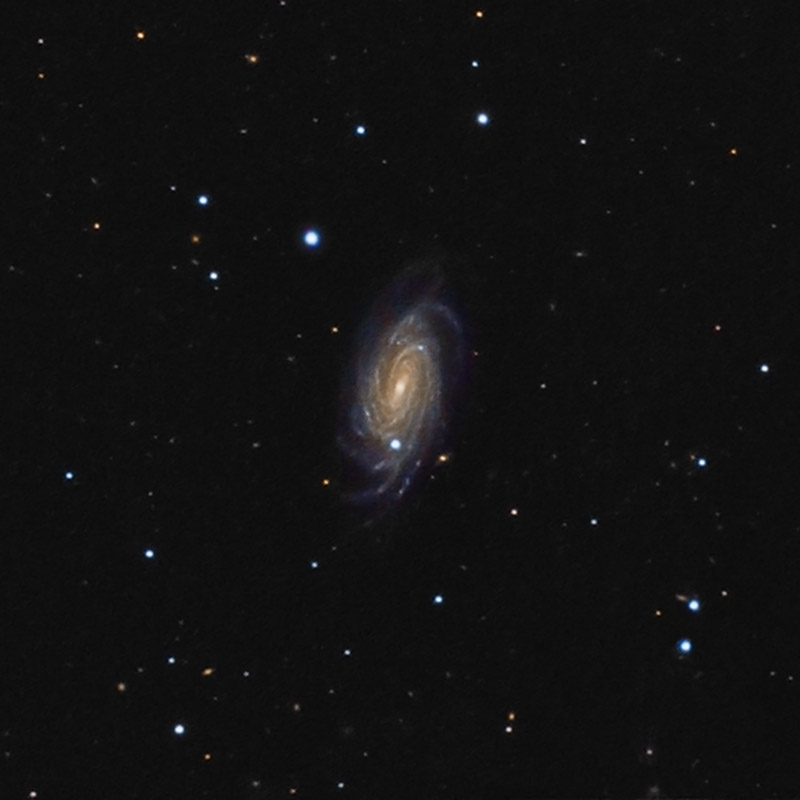 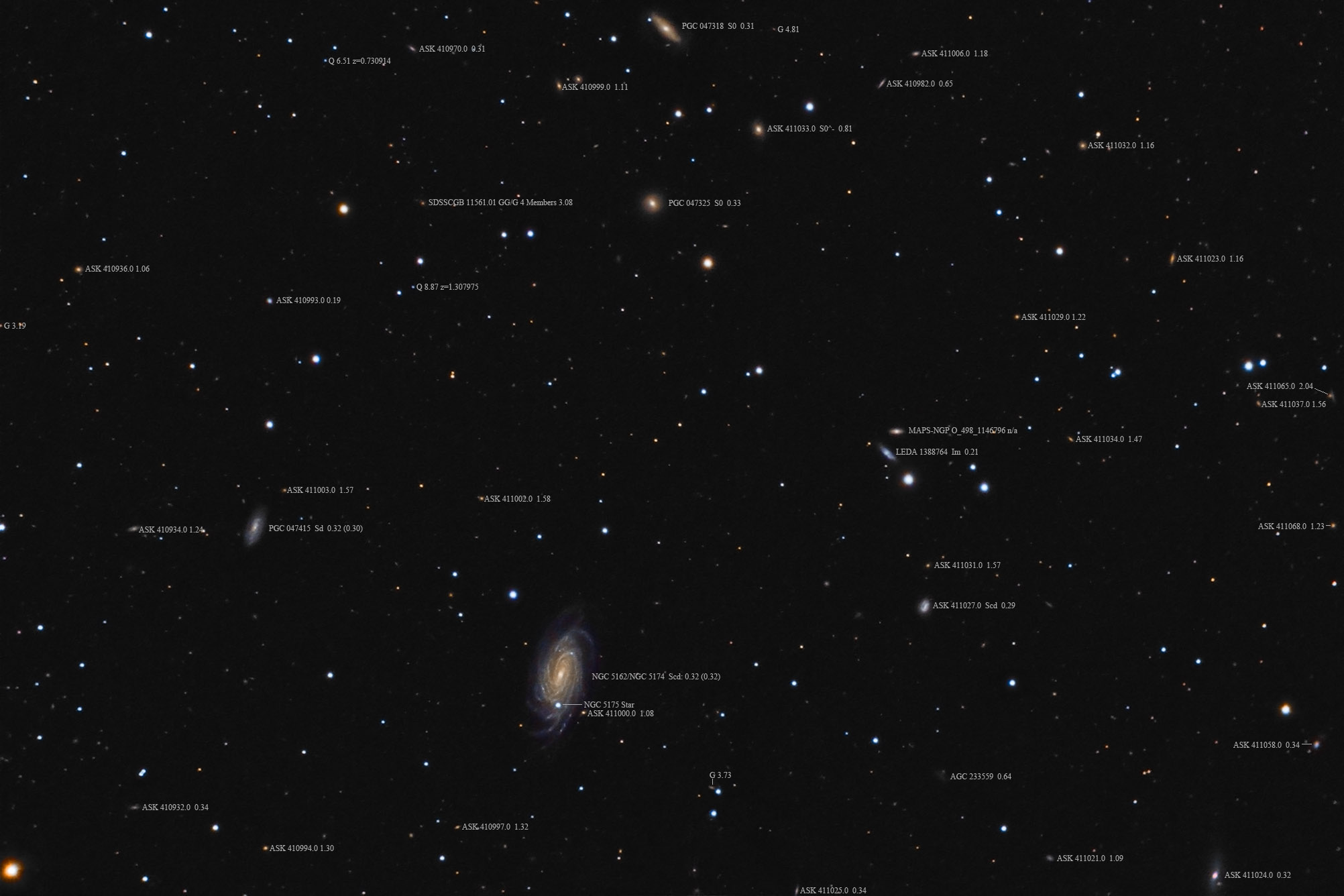