NGC 5248 is a spectacular spiral galaxy that doesn\'t get nearly the attention from amateur imagers as it should. It is located in the very southwest corner of Bootes just over the border from Virgo and is considered a member of one arm of the Virgo Cluster. That means its distance is likely in the 50 to 60 million light-year range. I can\'t find any consensus in the literature. I\'m going to go with the 60 million light-year figure as it is a good average for the cluster. Even though the average of all non-redshift measurements at NED are only 50 million light-years with the newest estimates at only 40 million. Assuming the 60 million light-year distance it is some 170,000 light-years in diameter when the very faint outer arms are included. Some but not all classifications consider these outer arms a pseudo-ring giving its classification as (R)SB(rs)bc. It also has a Seyfert 2 core with HII emission. This comes from a ring of star-forming clouds 12\" in diameter around the core. Seeing was fair for my image but I only picked up this ring as a mottling around the outer edge of the round core. High-resolution images from the HST show the core has its own spiral structure, sort of a spiral within a spiral. https://upload.wikimedia.org/wikipedia/commons/f/f1/Ngc5248-hst-R814G547B336.jpg Oddly, even with all this star formation going on one paper calls the galaxy inactive. http://mnras.oxfordjournals.org/content/379/4/1249.full.pdf They also give its distance as 74 million light-years. While the core is quite active the disk appears to have little star formation. Some images show a few HII regions in the main dust lane but they are small. The overall color of the galaxy is much redder than in most spirals. It may be this lack of disk star formation that caused it to be listed as inactive in the paper though it does contrast it to Seyfert 2 galaxies without ever mentioning it too is a Seyfert 2 galaxy.

While all sources call it a slightly barred galaxy I am unable to see any hint of the bar, even in the HST image. Occasionally the bar is seen only at radio frequencies. This might be such a case. It is true the arms come off this 12\" diameter ring of star formation rather than the core but I see no bar leading to this ring.

The galaxy was discovered by William Herschel on April 15, 1784. It is in the original Herschel 400 observing program. My notes from that read: \"Large, almost round galaxy with a nearly starlike nucleus. Interesting detail is seen in the halo. I can almost see the spiral arms. I must come back to this one on a good night.\" My notes on conditions read \"Thick ground fog\". As you likely know I often mention reshooting an image but it rarely happens. Seems I had that same issue back in April of 1985 as I never recorded revisiting it even though I put several exclamation points after that comment. It\'s a big universe out there with too much to explore for me to find time to go back to the old. That\'s my excuse anyway.

Large but faint outer arms like seen here are often the sign of interaction with another galaxy. None are in my frame though I didn\'t check around the area outside the field. More likely lack of star formation in the disk, as well as the active core, are due to something it digested in the past. This can kill star formation except in the dense core giving a galaxy this appearance. But it certainly isn\'t required that this happened. It may just be natural for this galaxy.

Only one quasar and two asteroids are in the image The field contains a lot of galaxies but few had redshift data leading to a rather sparse annotated image. As with much of my imaging of late, the night went south on me. Color data is highly suspect. One green frame never was taken as it was scheduled last and conditions got so bad that after the first green frame the observatory shut down. I didn\'t discover the missing green frame until I went to process it. Fortunately green is the least critical color and there was no space junk in the single green frame. Every blue and 3 luminance frames had at least one piece of space junk, some frames had two. With no space junk, I managed to make the one green frame do. 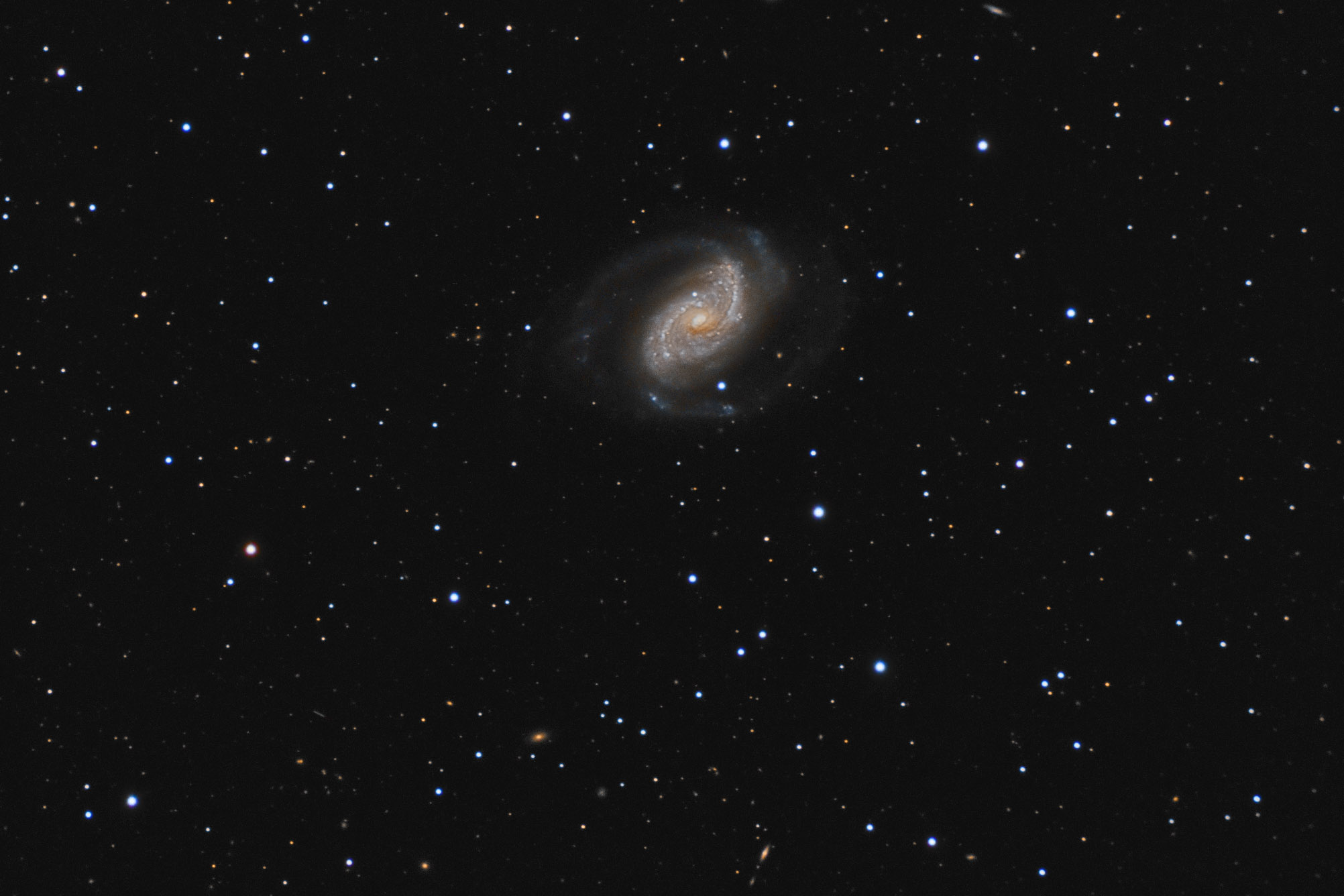 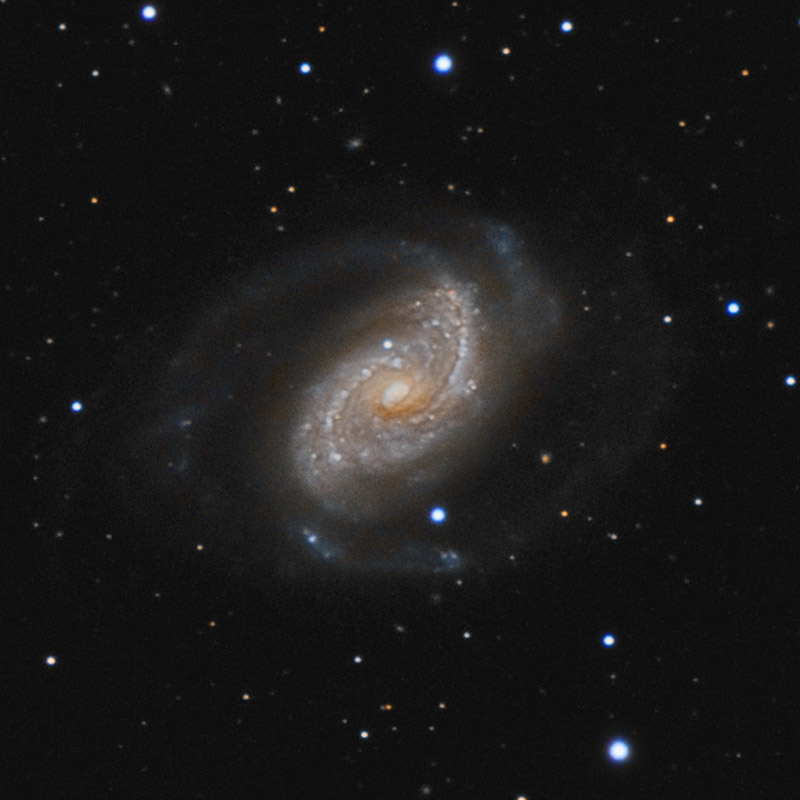 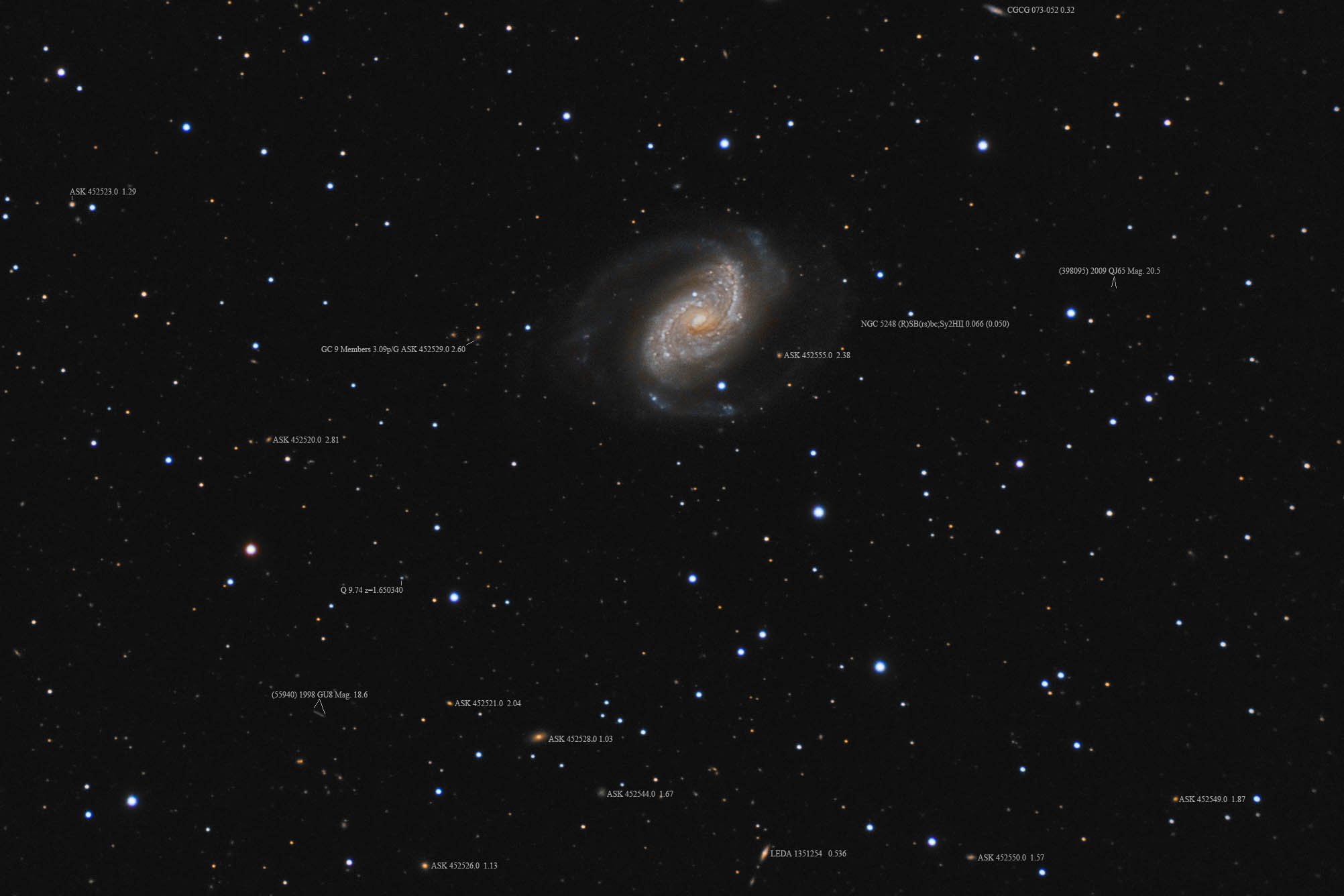 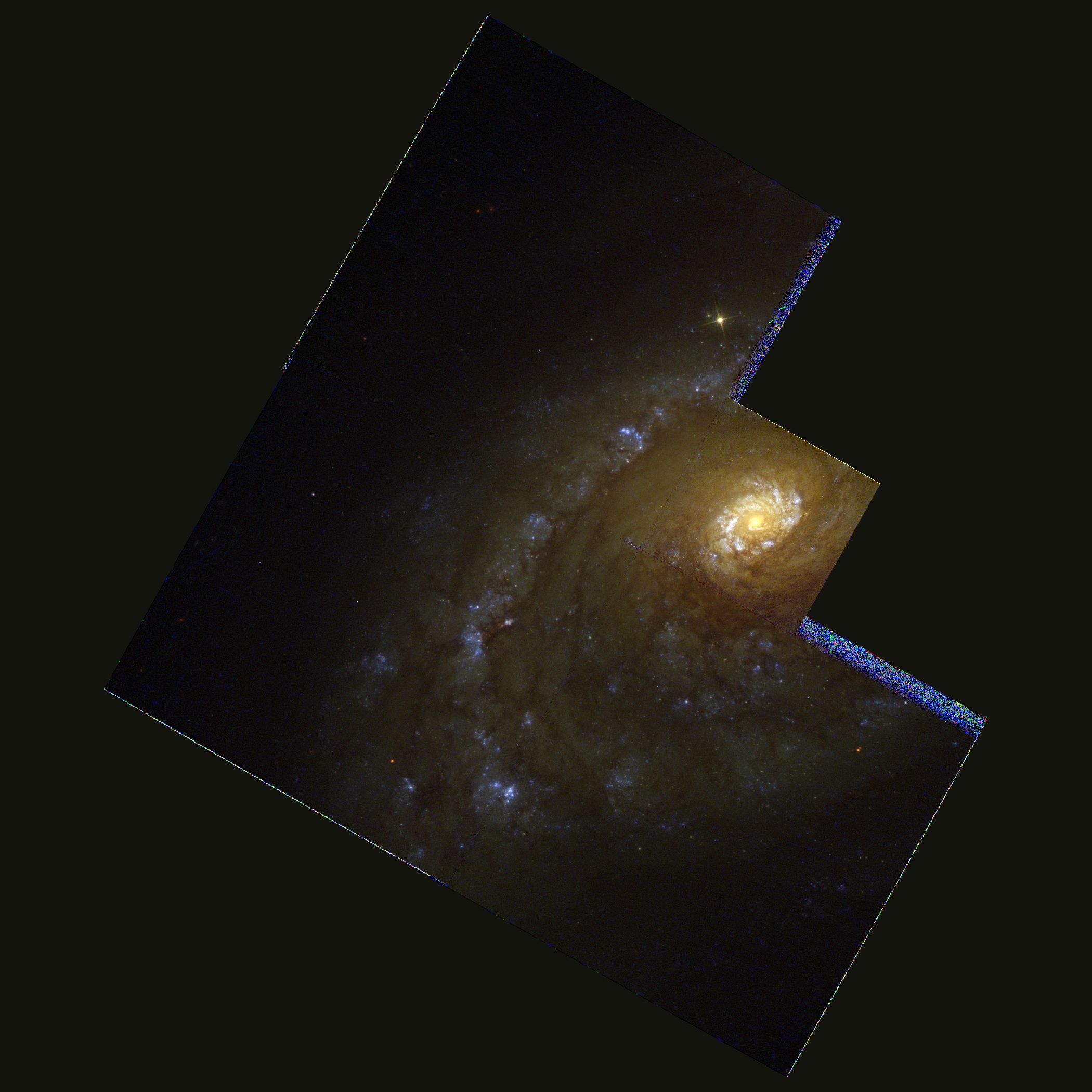