NGC 5275 and NGC 5280 are located in a rich galaxy field in Canes Venatici about 1.5 degrees north of the far more famous M3. While the 5 largest galaxies constitute the WBL 464 galaxy group I couldn\'t determine exactly what cluster the vast majority of these belong to. There appear to be three main groups, one about 500 million light-years, another at 600 million light-years and a third at 850 million light-years. There\'s lots of overlap here. The most distant group are likely members of the ABELL 7181 galaxy cluster listed at 830 million light-years. It is a very large but sparse cluster with a center about a minute beyond the left border about midline.

The reason I imaged the field was NGC 5275, also known as VV 543E, An E or maybe S0 galaxy that\'s quite compact so of rather high mass. It has an apparent companion, VV 543W, a blue spiral that\'s somewhat distorted with a detached blue star cloud at its south end. This makes the illusion that is it highly warped into a curve around NGC 5275. However, it is an illusion. While it appears distorted it isn\'t warped after all. The Sloan Survey image clearly shows the arms that appear drawn toward NGC 5275 and the detached piece. My seeing was too poor to show this very clearly. So are they interacting? I found nothing in the literature on this pair addressing this. Redshift puts them about 70 million light-years apart. If correct they are members of two different groups and thus not interacting. Could the difference be due to a high-speed difference between the two? I find this unlikely as such a big speed difference would mean they were within interaction range for far too short of a time to create this distortion.

UGC 8682 to the northeast of NGC 5275 has a warped southeast end. At 500 million light-years it is another 70 million light-years closer than NGC 5275 so again it is doubtful NGC 5275 had anything to do with its distortion. But it is the same distance as NGC 5280. They could have interacted in the past. Unfortunately, I found nothing on these two either. The field is very poorly researched from what I could determine.

The annotated image lists all galaxies NED had redshift data on as well as a couple quasars. The quasar to the northeast was listed twice with a position difference of only 0.02\" of arc and with a slightly different redshift. This is why it is listed with two z values. When converted to light travel time those values were the same within the three digit accuracy I use so only one light travel distance is shown.

If the galaxy had an entry in a common catalog it is listed by that catalog name, otherwise, just a G is used. Why some bright galaxies were missed by LEDA or others but but such catalogs picked up much smaller and fainter galaxies that were very close in position to each other I can\'t fathom.

I\'ve included the Sloan image as transparency was so poor the night I took this I couldn\'t go nearly as deep as I would normally go, so a lot was lost. 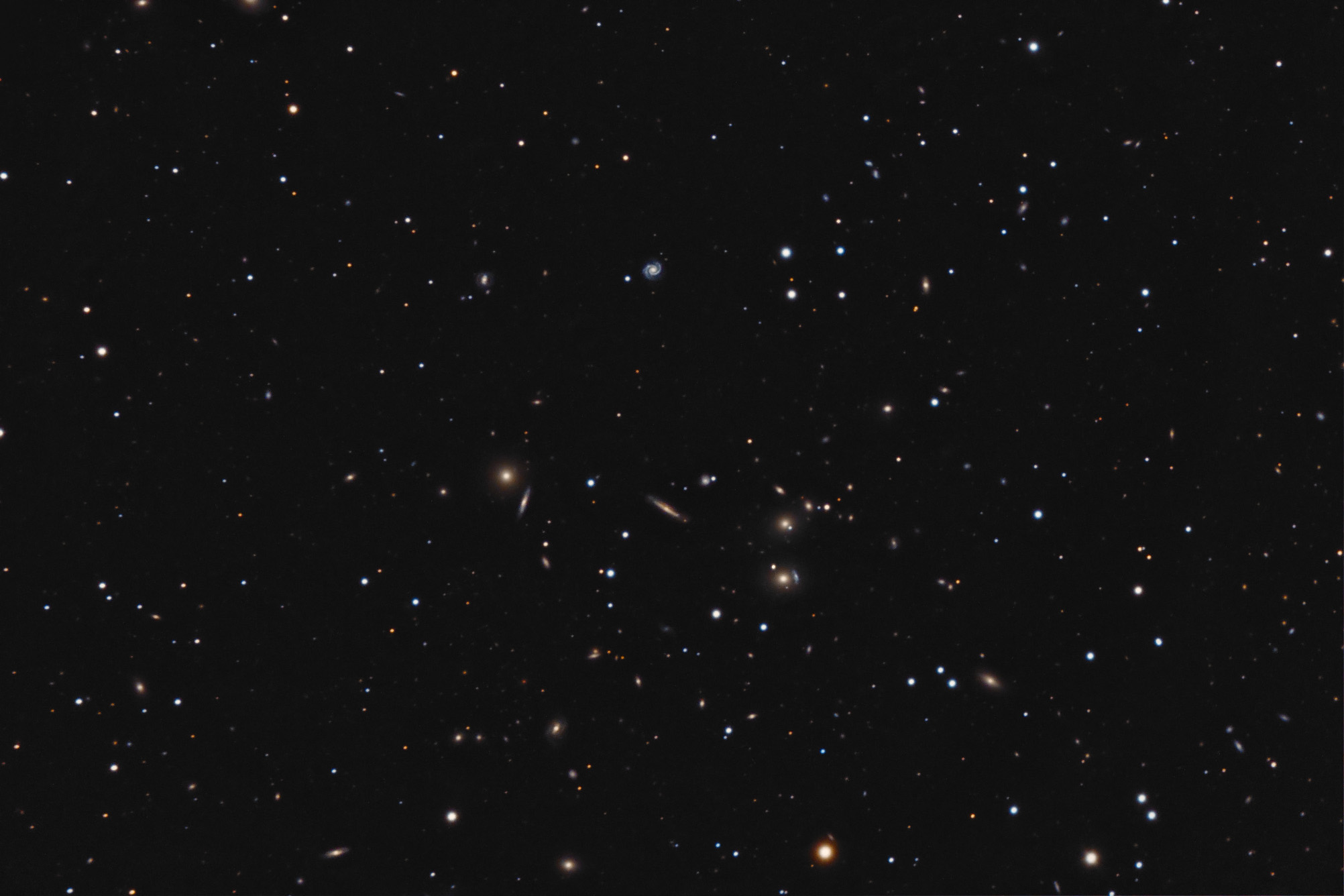 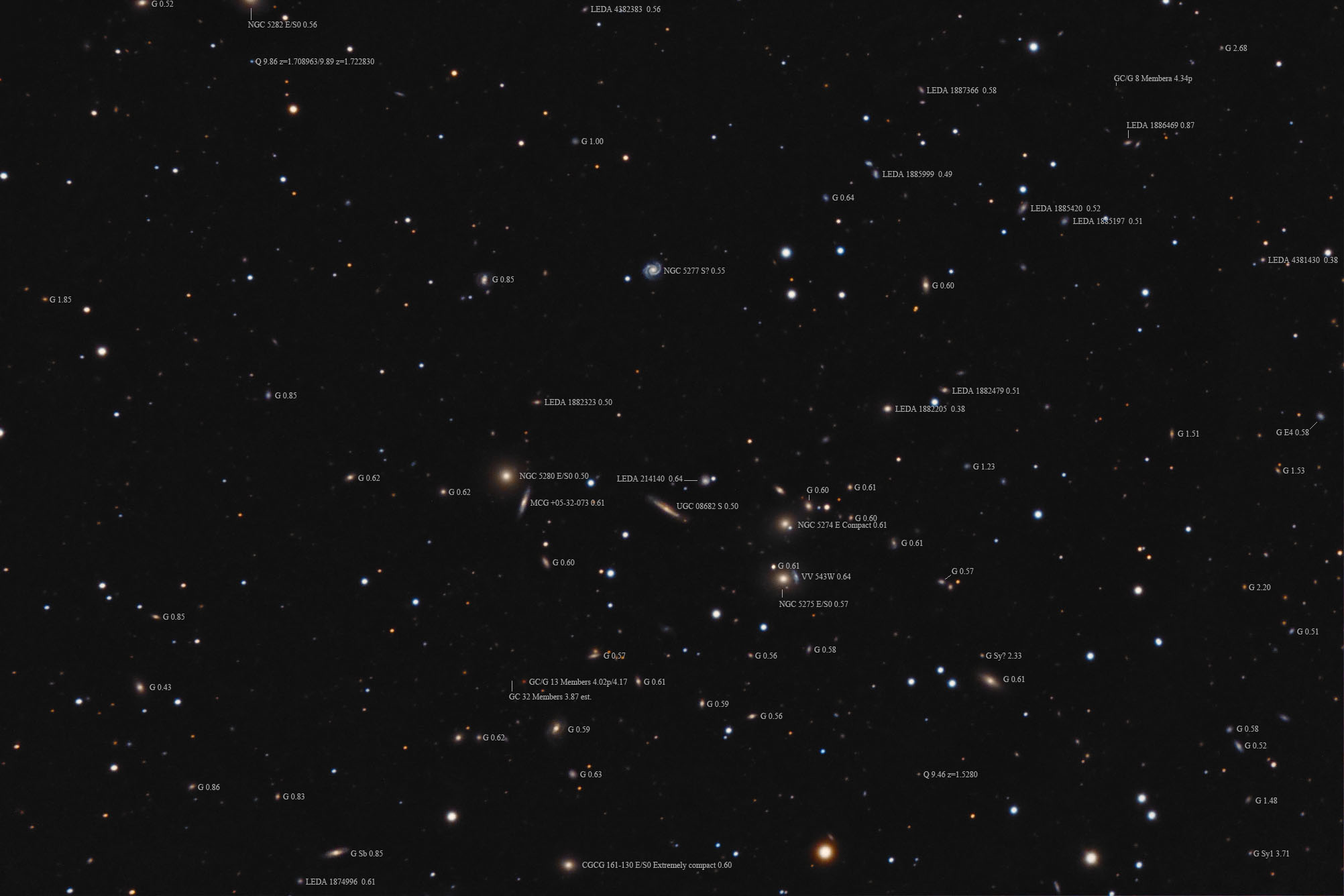 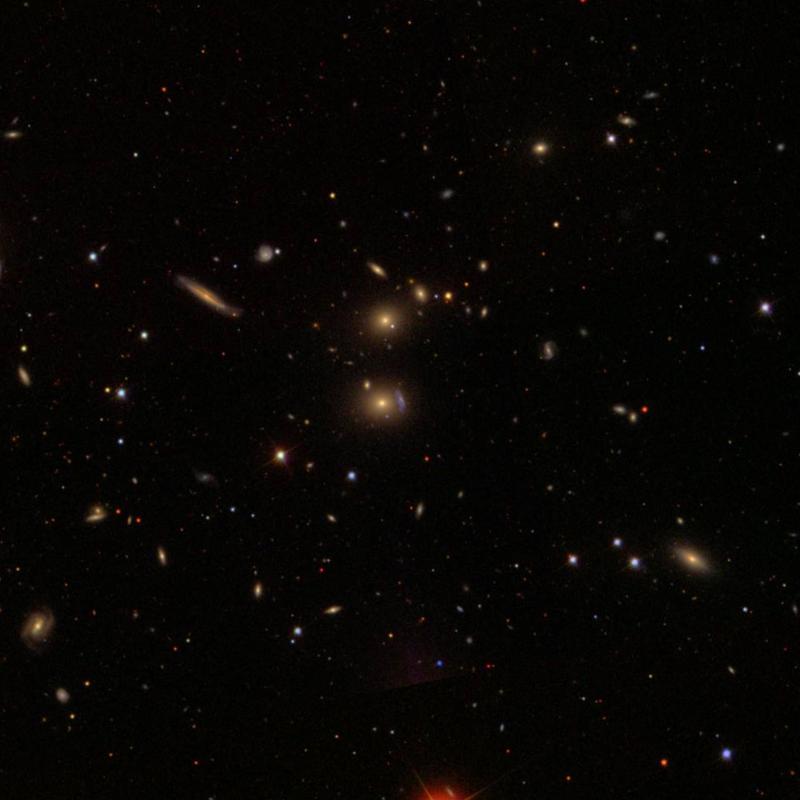