This was another opportunity to catch two objects on my to-do list in one field. Maybe my desire to catch two objects is why I took them on such a poor night. This field is in central Virgo but doesn\'t contain any known members of the famous Virgo Cluster which is some 60 million light-years distant but all galaxies with known redshift in this image are over 200 million distant.

NGC 5331 is actually two galaxies both nearly a half billion light-years distant that are obviously interacting as there are some huge plumes created by their interaction. Unfortunately, this was taken on some very bad nights for transparency (what\'s new about that this month of May?) so the plumes don\'t show very well. The one north of the northern member is especially faint. I need to revisit this field on a better night. I measure the northern member, ignoring any plume at about 73,000 light-years across. I didn\'t include the plume to the north as it was just too faint for a good measurement. The southern member has an extended plume off both ends but especially the northwestern end. I measure its size with the plume, to the extent I see it under these conditions, at 218,000 light-years with the main part 82,000 light-years in size. On a night I\'m not losing 2 magnitudes too high clouds (my cloud sensor said it was cloudy so I overrode it to keep imaging, maybe not a good idea) I\'m sure both would measure larger. NED simply calls them spirals. The NGC Project says Sbc. That appears to be for both which doesn\'t make much sense. Seligman doesn\'t have anything on these two at all. The pair was discovered by William Herschel on May 13, 1793. As he gave it one entry I doubt he realized he was seeing two objects. Of course, the concept of galaxies never existed in his time so this isn\'t surprising.

My other target of interest is a pair of possibly interacting galaxies to the northeast, UGC 08787 and CGCG 045-130. Both are seen rather edge on. UGC 8787 makes the 2-micron flat galaxy catalog as it appears to have no central bulge. NED classifies it as Sbc: sp LLIRG. LLRG stands for Lower Luminosity InfraRed Galaxy (L<=sun^10.5) LIRG is Luminous Infrared Galaxy (L>sun^10.5<=sun^11) and ULIRG is Ultra Luminous Infrared Galaxy (L>sun^11<=sun^12 but what\'s over Sun^12 I don\'t know). This is measured in IR, not visual wavelengths. It has faint extensions off both ends that likely are larger than what I can show under these conditions. I find nothing on it to indicate if these are due to CGCG 045-130 that has virtually the same redshift. Both lie about 210 million light-years away. CGCG 045-130 seems to be either two galaxies or one with an off-center core. Oddly NED shows that Sloan sees a 21st magnitude star at the position of this blue blob at the southeast end of the galaxy. I\'m going to assume it is just a star cloud in the galaxy. NED classifies it as Sc(f). The (f) means it is seen edge-on. I can\'t tell for sure but to me, it looks tilted 10 to 15 degrees away from edge-on. Is the blue object at the southeast end the result of interaction with UGC 08787? Again I found nothing on this.

At the top of the image is NGC 5329 and elliptical galaxy some 340 million light-years distant by redshift, 360 by a pair of Tully-Fisher measurements that disagree by a rather wide margin but average to 360 million light-years. I went with the redshift value and measured it at 234,000 light-years in diameter. Considering how bad the night was I suspect this underestimates its true size. It was discovered by William Herschel on April 30, 1789, four years before he found NGC 5331. Neither of these made either of the Herschel 400 observing programs.

There were several asteroids that normally would be seen in my image. Two are right at my limit and should have been easy. Two were too faint to find and should have been detected better than the two faint ones were. One was quite bright in the lower left of the image. Normally you\'d see color trails but I took the color data a night earlier under even worse conditions so that asteroid wasn\'t in the image frame that night. Details on these are in the annotated image. The night color was taken had horrible seeing of about 7\" when blue was taken 4 seconds for red. This causes some color issues. Green was between at 5 to 6 second seeing but only one frame was usable.

The annotated image had to omit about 30 objects that I\'d have normally annotated. They just didn\'t make it through the clouds. 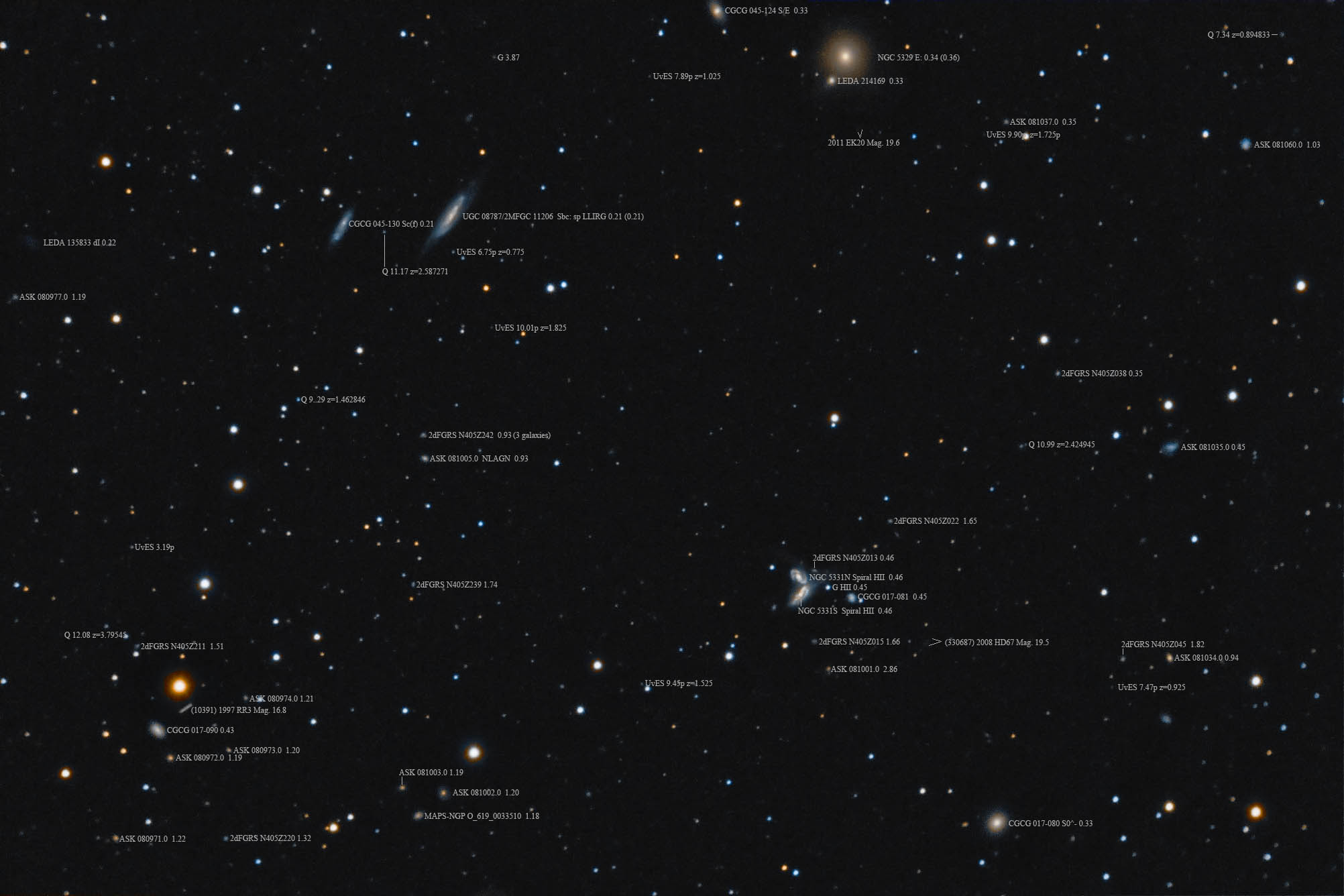 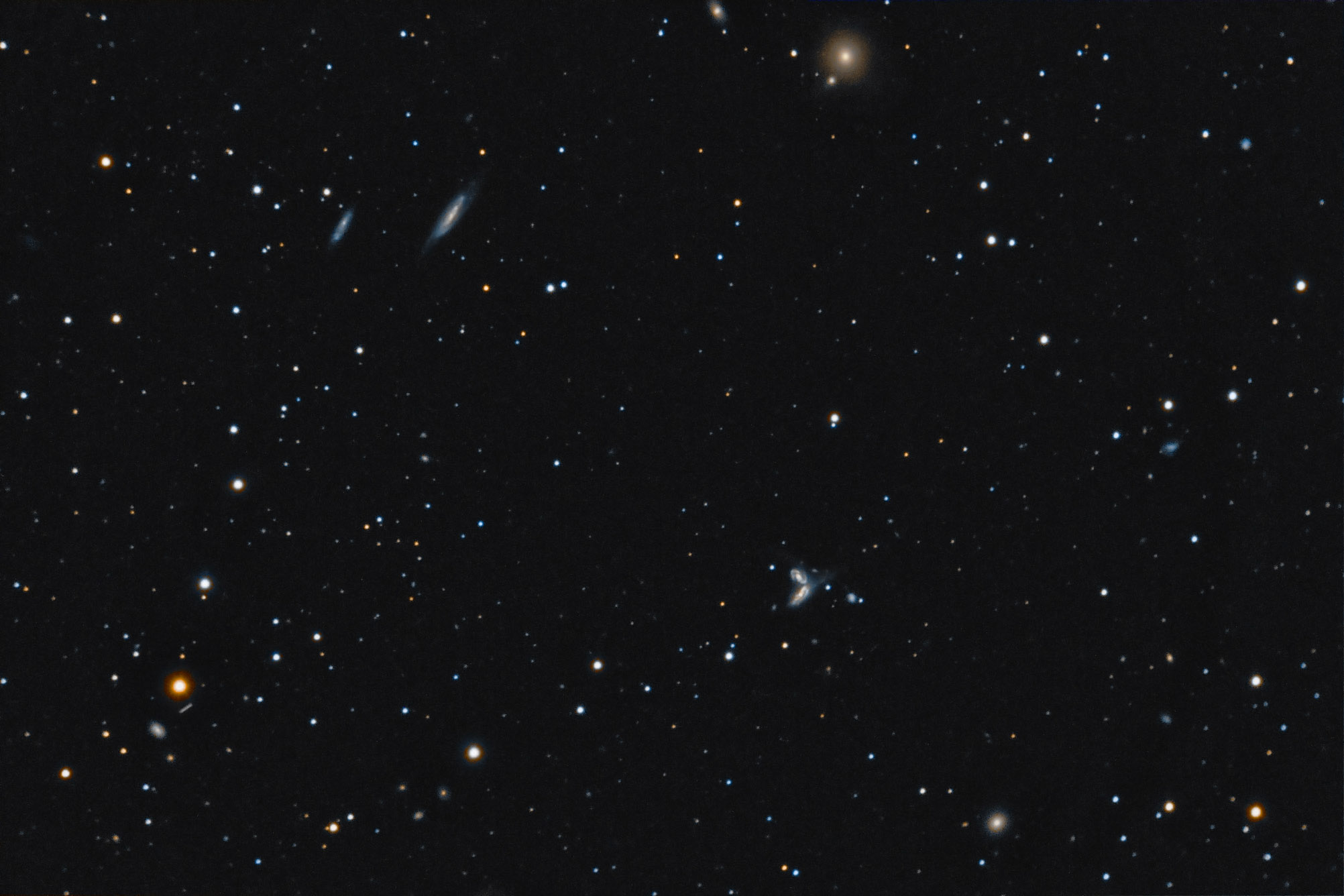