NGC 5400 is a very large S0 galaxy in Virgo about 350 to 360 million light-years distant. Thus while it is in Virgo it is far beyond the Virgo Galaxy cluster that lies 6 times closer. While its edges are hard to determine my measurement shows it to be about 1.7 minutes across and thus over 170,000 light-years across at 350 million light-years. NED, however, puts its diameter smaller at a bit less than 1.2 minutes which would be only 120,000 light-years across. I\'m unable to explain the difference in angular size measurement other than edges are fuzzy but certainly easier to measure than that difference would indicate. It was discovered by William Herschel on April 15, 1787. It isn\'t included in either Herschel 400 list, however. My image shows its color a lot more red than I expected from other images. I suspect conditions may have had something to do with shifting my fainter objects to the red. They were awful. I had to shut down and never did get back to redo it.

The galaxy seems to anchor the WBL 483 galaxy cluster whose center is only about a minute of arc from this galaxy as noted by NED. I used the galaxy as the marker in the annotated image though technically that\'s not quite correct. The cluster has no diameter listed. NED says it is richness class 3. If this is the same as Abell\'s richness scale then it has 130 to 199 galaxies. Most the galaxies in the image tend to be likely members of the cluster.

The galaxy pair IC 968 is an apparent member of NGC 5400\'s galaxy cluster. This pair was found by Guillaume Gigourdan on May 6, 1888. The pair appears to be interacting. My exposure didn\'t go as deep as I\'d have liked and missed the debris around the western member of the pair. Long exposure images show the eastern member as rather unharmed by the encounter. While their radial velocities are somewhat different this doesn\'t mean they are at different actual distances, only that they may be passing each other at a fairly high rate of speed. Assuming a middle value of 350 million light-years for their distance the western galaxy is almost 60 thousand light-years across while the eastern galaxy is a tad over 60 thousand light-years across. NED, however, sees them as considerably larger than I do giving sizes of 66,000 and 82,000 light-years respectively. Quite a difference and again I can\'t understand why the difference. Usually, we agree rather closely.

It may have something to do with the horrid conditions that night. The observatory shut down after the blue frame. I had only one frame of each color thanks to the conditions. Also, the background was 10 times brighter than normal for a moonless night that this was. The blue frame was about 16 times brighter and may account for the color of NGC 5400 though the stars came out about right. The observatory shut down because the sky was too bright. The cloud sensor thought it was well into dawn but that hadn\'t started. Checking SpaceWeather.com I found there was some auroral activity that night but nothing of this intensity that would hit the southern sky like this. But their numbers may be deceiving and there was a bright but featureless aurora going on. One problem with sleeping while your computer gathers data. I didn\'t realize it had shut down early. I only found the problem when I went to process it months later. Too late to retake the data until next year. Not sure it is worth it. But should at least redo the color as it is highly suspect. 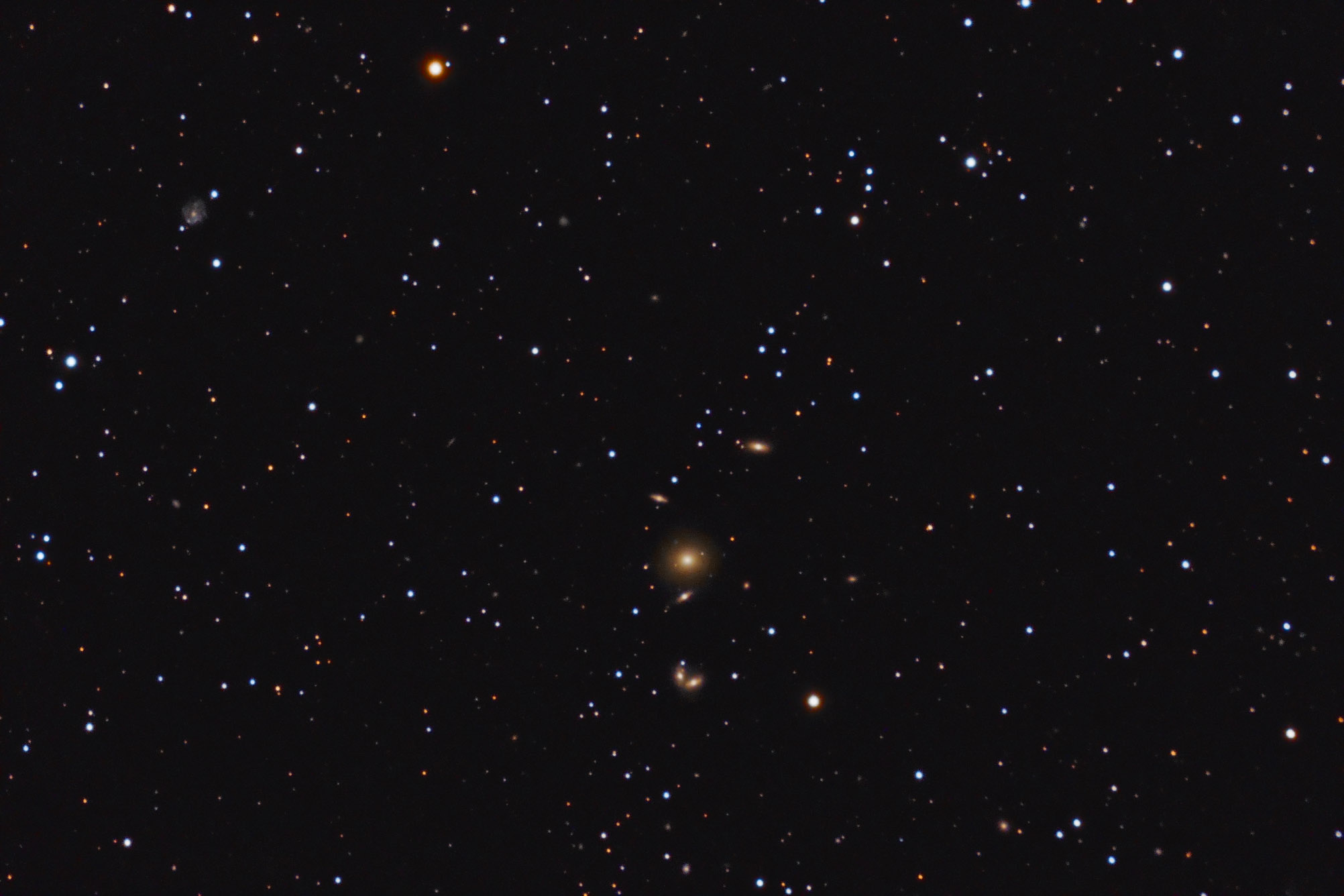 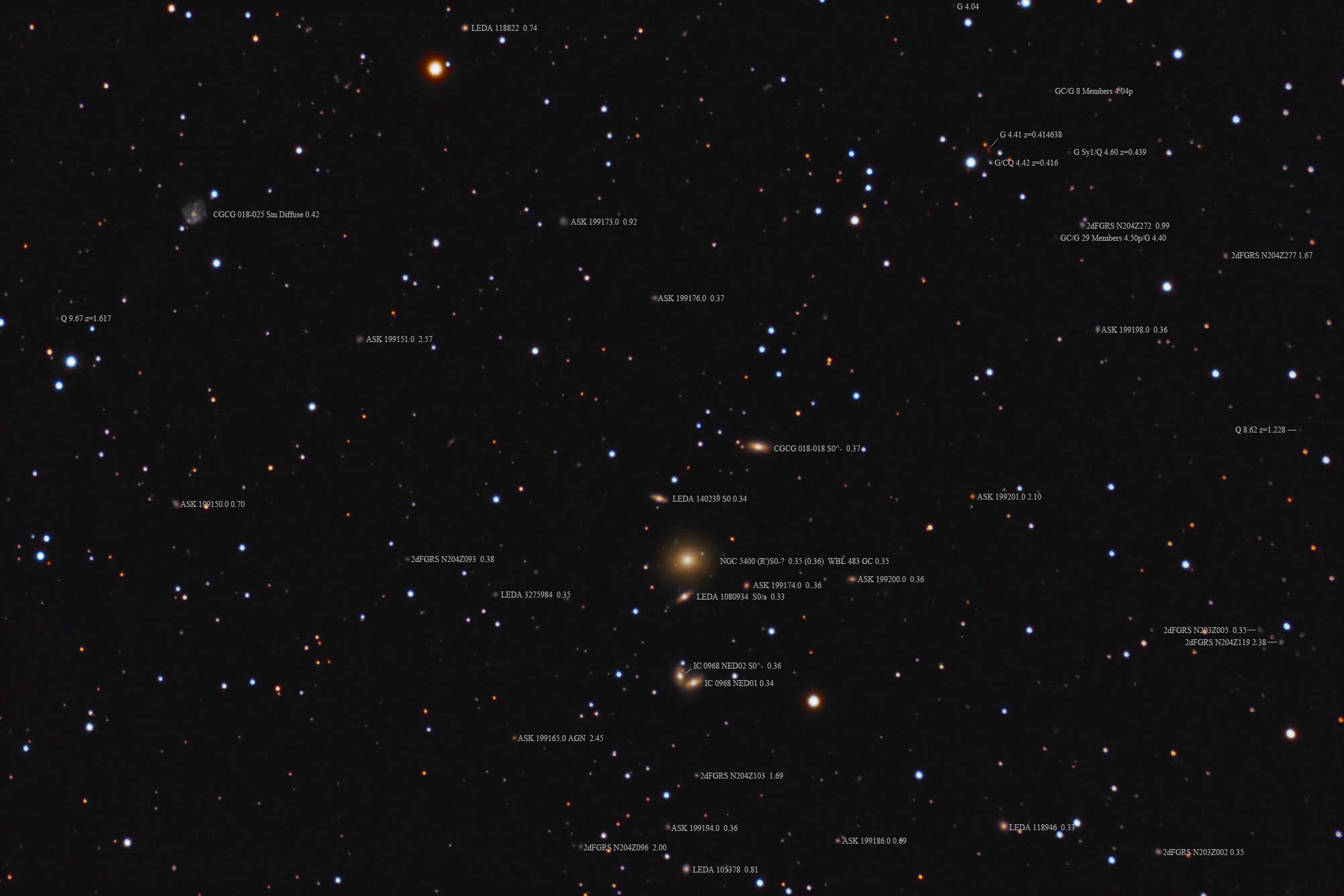